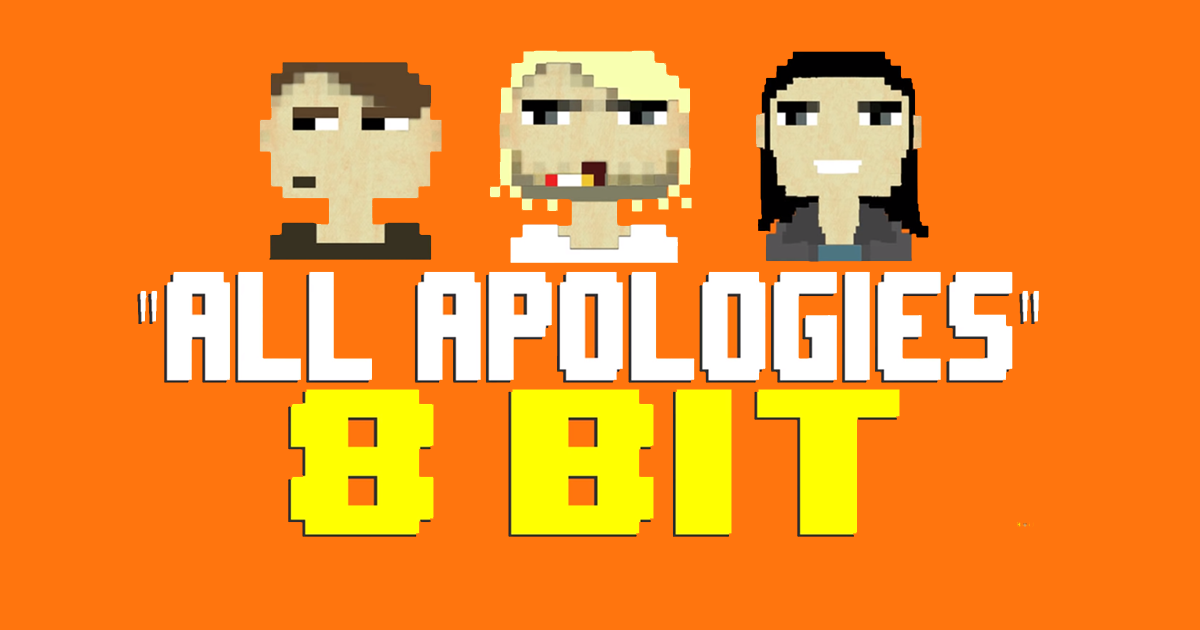 Cranking out intentionally antiquated digital versions of popular songs is not high art. But if done correctly, it can be high content.

8 Bit Universe (8BU) is a nexus of pop music, fandom, and retrofuturism bound to delight and/or annoy the shit out of anyone who browses into its beepy-boopy orbit. While not the first or only outlet of its kind, having surpassed 780,000 subscribers and 139 million total views, it appears to be the most successful, prolific, and eclectic of the lot. 8BU probably does not actually have something for everyone, but boy howdy do they try. Wanna know what Lady Gaga’s “Shallow” would sound like if A Star Is Born was an NES cartridge instead of an Oscar-nominated film? Maybe you don’t care for timeless tales of tragic romance, but you really dig the band Ghost and wish they could have written the soundtrack for a side-scrolling beat-’em-up arcade machine in 1987? Maybe you hate all songs except for Nicktoons themes covered in a half-ironic style of electronic music? 8BU has all of those things, as well as most of the other things.

A loose collective of spotlight- and travel-weary performers and composers launched 8BU on YouTube in 2014. Our subject — who identifies himself as the manager of the channel’s day-to-day affairs — declines to give us his or any other names related to the company. We’re told the minds behind 8BU got burnt out on other people’s attention during their previous lives in the conventional music industry, so they certainly don’t want to deal with the privacy-annihilating horror of internet fame.

Of course, there’s no way for us to confirm that last part. Most of the time, interviews with anonymous sources violate basic journalistic standards and practices. And it’s like, yeah, of course, but I mean, c’mon, this is an article about chiptune covers. Lighten up.

Hard Noise: Okay, so how do you pick the songs you’re going to use?

8 Bit Universe: We used to try to think in terms of clickability and search engine stuff, and it just doesn’t work the way you think it will. What you don’t realize at first is attacking the most trendy thing at the moment becomes diluted, because everybody’s always attacking the most trendy thing. So what we started doing is ignoring that and asking ourselves, “What songs have been awesome forever?”

But it’s hard to say. Sometimes we’ll aim for fandoms. Like, XXXTentacion was a weird enigma to us because we never thought he was going to blow up as much as he did [on the channel]. But at the same time, we’ve got Dragonforce [as a notable success].

It’s a collection of synths we’ve found or created or modified over the years. If you listen to some of our earliest content, we’ve changed a lot since the beginning. It’s just about finding new sounds that best represent current-day sounds in a fun, arcade-ish way. If you search for anything with the word “bit,” “chip,” “arcade,” or any of the old consoles, you can easily find all kinds of great stuff. We use keyboards to input the midi, but they’re not absolutely necessary, as you can input the data with any kind of midi controller or basic “qwerty” keyboard.

Anything else surprise you? Like, was there a song you were sure was gonna kill and didn’t, or something you had low expectations for that did particularly well?

Off the top of my head, I thought Radiohead’s “Creep” would’ve done better, but I guess they’re not as popular today. It’s weird because sometimes they build views slowly, and you think they’re not doing well because they just might have 1,000 views one day, but then you check back two or three months later and it’s like, “Oh, wow, this video’s doing really well.” We were surprised how well System of a Down were received. We didn’t think we’d get any views on those. We just did them because we love the band. And boom; every one of their videos did awesome.

System of a Down songs translate well to this style, I think.

This stuff is super mathematic, and there’s no wiggle room in the programming of these tracks, so since things like System of a Down and Slipknot have a lot of really mathematical parts, those tunes tend to translate more easily than others.

Do you call your videos “tributes” to differentiate them from “remixes” or “covers”?

Using “tributes” was a thing we picked based on clickability. People tend to click on “tributes” more than “covers,” because I guess they associate covers with people in their bedrooms, whereas what we’re doing isn’t really about us, per se. It’s about the tunes.

How much time goes by from hearing a song, deciding you’re going to use it, and putting the 8-bit version online?

It varies. Like, some things are more of a gamble. We have to purchase a license for everything we decide to make, so everything requires a little bit of an investment. And we pay the guy who does the main amount of programming, because he’s the one doing the most actual work.

After that, we have to do songs that are current because it keeps us ranking high on the search engine stuff, but at the same time, we’ll have songs we’ve wanted to do for the past couple of years that we don’t get to because you’re always constantly in production. If somebody puts out a new song this week and they’re one of the top artists in America, then we have to do that song. Sometimes we’ll get hit up by a record label or a management company and they’ll want us to cover one of their artists, and those are paid, so we also have to do those immediately. But we try to slip in the songs we love whenever we can.

Wait, so industry people will call you up and say, like, “Hey, do a song by so and so” and that’s a source of revenue?

I would say that started happening right around 500,000 subscribers. Once you hit a certain amount of subscribers you kind of pop up on the radar of these mid-level artists who’re trying to break into the mainstream and pick up on every one of these little influencer sites. We’re just another media outlet for them. Y’know, they’ll send releases out to magazines and music sites, so what’s the difference between that and putting out a little 8-bit jam?

You mentioned XXXTentacion earlier, and I think I saw some PewDiePie songs on your channel. I didn’t know that guy did music. But anyway, how do you approach artists who’ve allegedly done nasty shit in their personal lives or said nasty things online or whathaveyou?

Y’know, it’s tough. We talk about this all the time amongst us, and we’re split, because if we were to go into history and try to eliminate all of the art that has come out from terrible people, how much great art would go? Y’know? I don’t think that the artist is attached to it once it gets out into the world, at least in the sense that I don’t look at a painting and think about that artist’s personal life. I think about the way painting looks and how it makes me feel and whether I like it or not. And I think that for a ton of people who aren’t looking into that pop culture magnifying glass everyday, they’re just listening to music. And I think we’re more for that idea.

Are all guitar bands easier to 8-bit-ize than other genres? More difficult sometimes, maybe?

It really just depends on the artist. We did a whole Queen tribute album after Bohemian Rhapsody came out, and maybe 70 percent of the songs were pretty straight forward. But then you get into programming the Brian May guitar parts, and of course it could take two or three hours alone for his guitar solos. It really does just depend on how loose and expressive the part that you’re trying to make is. If it’s all straight notes and straight chords and everything’s syncopated mathematically, it’s a lot easier than trying to do all the more expressive bits.

Any songs you’ve tried to make 8 bit and had to throw your hands up and say, “This is impossible”?

We thought that Dragonforce song was going to be impossible, and it kind of was. We just put it into production, and then it would sit on the side with maybe 10 percent done. Then it was 20 percent done. Then eventually there was a free day and you could finish the thing. But sometimes we’ll hear something and say, “Okay, this is a joke. There’s no way it’s getting done.” But it’s not always about accuracy. Sometimes it’s just about suggesting the part, or making it sound like something’s there. You get what I mean? We might not be able to make a guitar pick slide noise with these chip sounds, but we can make the whole synth dive bomb by itself and people get the idea of what that part is. Or when rappers have backing guys shout ad-libbed parts, all you need is a beep bop boop and it kind of presents the idea of what’s going on back there.

Many of the people on the internet are scary, so I understand wanting to avoid them by keeping your identities secret.

People attack us every day for all kinds of things. If we post anything that’s even remotely political, the fans just go crazy talking shit. It’s not a great world right now. At the same time, it is, but you have to keep stock of your personal self and protect that, I think, when you’re going to leave yourself exposed to this many people.

When Trump was running … I forget what song we picked, but we basically posted a song that took a little shot at him. We posted a video that made Bernie look good. It’s all just silly stuff to us on this end, but it’s not that in the real world, and we get that. We try to be an escape where somebody can come and hear the cartoon themes they love, goofy pop punk bands they love. It’s an escape from everyday reality, so let’s not try to invite that reality into the comments and into our personal lives. That’s kind of the idea. I mean, we’ve all been in bands that have toured, did Warped Tour stuff. The owner was huge in the ‘90s and the ‘80s. And, y’know. That’s all I really wanna say. I mean, I would just get into things, and none of it’s worth it. We just enjoy what we’re doing.