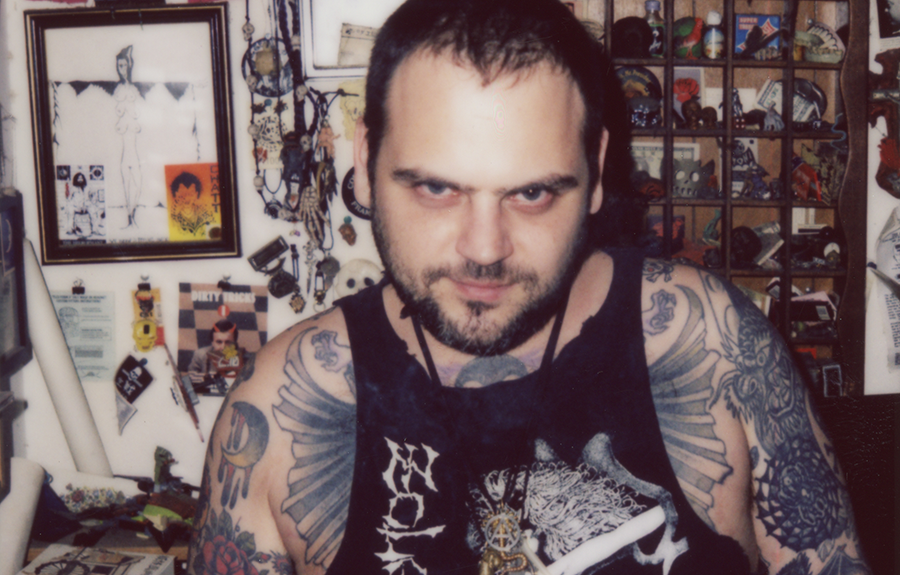 Alexander Heir’s studio feels like stepping into a physical manifestation of his mind. Every corner of the small Fort Greene apartment is filled floor to ceiling with action figures, skulls (both plastic and potentially real), a necklace made of chicken feet, and far too much occult imagery to describe. It feels overwhelming and a little disorienting, which is probably the intent. From this room, for nearly a decade now, Heir has run his clothing brand Death/Traitors and made his art: grimey drawings of skulls, spiders, dismemberment, ritual sacrifice, and police brutality, sometimes all at once. His iconography has become iconic, adorning flyers and album covers, especially in the New York hardcore scene.

The son of an artist, Heir studied at Pratt, which, although largely antithetical to what would become his style, did encourage him to work harder on cementing and crystalizing the ideas behind his art. Heir’s work, while unflinching in its darkness and antagonism to the modern era, almost always has an underlying sense of encouragement — that if something is horrifying, it should be stopped.

“To be unclear of your politics is to somehow gain cultural capital of being sketchy, which I’m not about,” Heir says. “So that was one of my concepts in making [my art and clothing]. Acknowledging the strength of images, including fascist ones, and how to harness that but still make the message clear. Making a piece that stands for anti-fascism or compassion, but it’s still being tough and badass and something you want to wear.”
Heir also sings in the band L.O.T.I.O.N., an industrial hardcore band built on attacking the modern techno-dystopia. Started in 2013 with his friend Tye Miller, a member of Sad Boy and Nomad, the project came to life as both of them realized they shared similar musical origins.

“We just had been talking, and realized both of us had grown up on punk, but also had been really into electronic music and industrial and stuff like that,” remembers Heir. “The Prodigy was one of the first CDs I had ever got. Tye had lived in Europe at some point where he got into techno before punk when he was 10, 11.”

That and a shared fondness for Scumputer (the solo project of Chaos UK guitarist Gabba) led them to start recording the first demos in Heir’s apartment. From there, the two would bring in Corey Haines to play bass. Emil Bognar-Nasdor of Dawn of Humans would later join with sample pads and drum triggers, figuring out how to translate the band’s sound into a live setting. Bognar-Nasdor eventually left the band, and in his stead Ryan Naideau of Warthog took over, shifting how L.O.T.I.O.N. made music.

“Whereas with Emil, Tye and I would write everything in [my apartment] and demo it,” says Heir. “Emil would kind of edit and work with us when we practiced. But now Ryan would be here in the studio with us all together, drinking and partying and doing it all together. I love programming, I’m happy with the beats I make, but I’m not a drummer. I can’t play for shit, and it’s just a different mentality and that added to it.”

If you listen closely you can hear that shift in their just-released second album World Wide W.E.B. While just as brutal and unrelenting as their previous releases on songs like “Hardware” and “Unplugged”, a track like “Unsecured Network” has an underlying groove to it that speaks to their formative influences. “ICBM” might be their poppiest composition to date, a duet with Jess Poplawski that has an earnestly catchy guitar riff and beat, though on closer inspection has the same dystopian mentality at its core.

Catching Heir at this highpoint, it’s surprising to hear him say that it was only a few years ago he still thought this might not be his future. It wasn’t until the publication of his first art book that he quashed the sense of worry that he might not be able to make it as an artist.

“I’m not just going to be totally forgotten or toil in anonymity,” Heir remembers thinking upon its publication. “This is out there, so you can let that thing go and focus on making great work. You’re not trying to be an artist. You are an artist, now just be the best artist you can be.”

And it seems Heir has largely succeeded at that. Last year, Sacred Bones put out his second book WARRR2k, which showcases his expansion into color and includes some of his most iconic pieces to date. At the album release for World Wide W.E.B. just a few weeks ago, L.O.T.I.O.N. played to a packed house of their peers, all simultaneously dancing and moshing shoulder-to-shoulder in a DIY venue in Bushwick that was clearly over capacity. For his part, Heir is very quick not to let any of this go to his head, still striving to maintain the original intent of his art even as it matures.

“Maybe remind myself, ‘Hey, now you’ve mastered a little of your craft, that doesn’t mean everything needs to be particularly rendered as perfectly,’” Heir says with a smile. “Don’t forget about the grime, don’t forget about the ugliness, because that’s still so beautiful as well.”

World Wide W.E.B. is out on Toxic State Records.