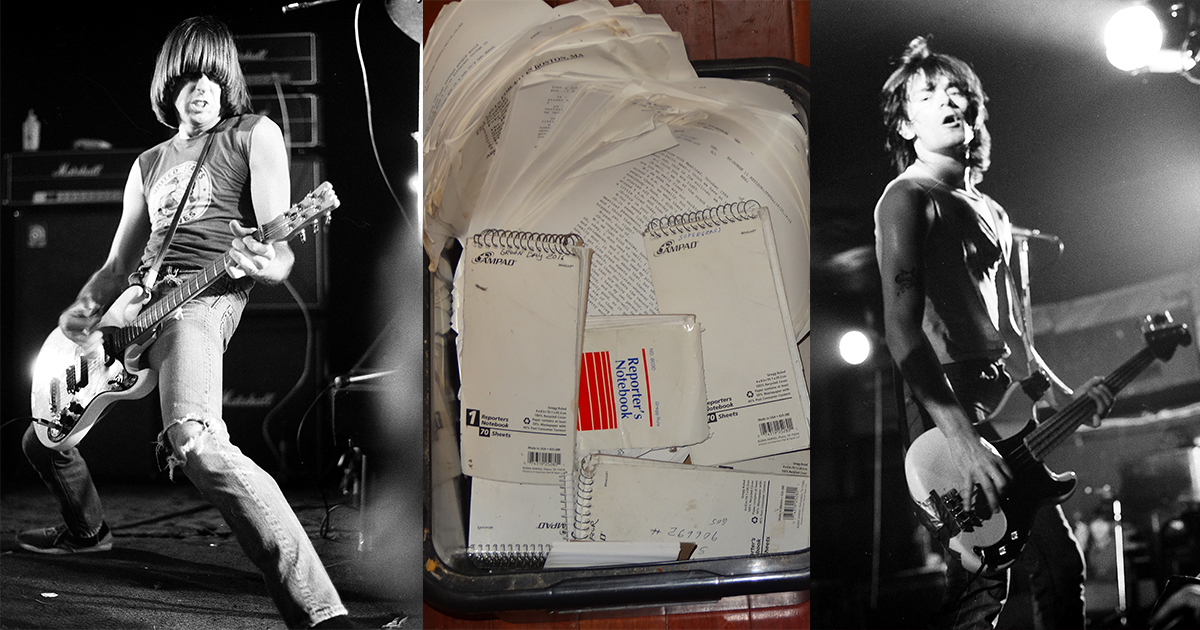 We Asked The Ramones About The Grateful Dead, Cartoons, and Disco in This Lost 1979 Interview

I’ve spent a lot of time with the Ramones over the years – pogoing and headbanging in front of the stage, interviewing them for my old Boston Globe column, even shedding a figurative tear at Lollapalooza in 1996 when I, among thousands of others, heard “Blitzkrieg Bop” and “Cretin Hop” played live for the last time in concert.

(By the Ramones, at least.)

I probably saw them live 25 times. The first time might have been the best; Halloween, 1977, right up front at CBGB, my ears blasted out for a week, waves of manic punk rock joy coursing through my brain long after the decibels subsided and Dee Dee Ramone’s 1-2-3-4 countdowns abated.

When I did a farewell story for the Boston Globe in ‘96, co-founding singer Joey Ramone seemed to be well aware of the legacy and cultural impact the band created. “”I think we’re leaving a historical legacy,” Joey told me. “We really changed rock ‘n’ roll. When we came out in ’74, rock ‘n’ roll was pretty much dead. It was just totally disco and corporate rock. It was totally synthetic. All the fun was totally gone. We rocked the boat, you know what I mean?”

He also told me about the band’s simple but powerful style.

Now, of course, the original Ramones are dead, although Marky Ramone and C.J. Ramone keep it beatin’ for all the hoppin’ cretins with Marky Ramone’s Blitzkrieg and C.J.’s outfit, each playing clubs with their Ramone-esque entities. But the band’s songs, and words, live on.

I recently went down into my basement, as one does, looking around for some forgotten something or other. I came across a few boxes I hadn’t opened in some time and, curious, popped them open to find what I guess I’d call the Basement Papers – spiral notebooks with interview transcriptions from the pre-computer days and then other printouts from the Palelithic computer era. Parts of what follows originally appeared in a long-gone newsprint monthly magazine in Boston called Sweet Potato.

The interview dates back to March, 1979. The Ramones were on the ascent (sort of). One step forward, two steps back. Still scorned by mainstream radio – and ignored by most of America – but embraced by an ever-increasing number of fans, at least in urban enclaves.

In Boston, they’d moved up from clubland to the 2800-capacity Orpheum theater and I ended up, pre-show, in a second-floor dressing room chatting with Johnny and Dee Dee. Joey wasn’t around. I can’t remember if their animosity was as bad then as it clearly was later, but suffice to say they didn’t seem to enjoy each other’s company much. (Joey was a lefty; Johnny a hardcore right-winger.) Where their sensibilities fused was their work.

Johnny is facing me in a chair, taking most of the questions. Dee Dee is off in the corner, tinkering with his bass guitar, with one ear tuned to the conversation, not wanting to be left out of the badinage that might ensue.

Though Studio 54 would close in 1980, it was still going strong when we talked and the Ramones famously hated disco. Naturally, I thought that was a place to start.

Hard Noise: So, have you guys ever been to Studio 54?

Johnny: (with amazement) What is it? A discotheque?

Johnny: I hate disco music. It’s disgusting. It’s some kind of Communist plot to make our brains smooth, to take the crevices out of it. Each artist sounds the same. Everything sounds the same. It’s all fabricated. It’s moronic.

Dee Dee: I can’t make any sense of it. All it is is a bunch of loud music and freaks hoppin’ up and down.
I talked to you to last July when you were recording Road to Ruin and you were guardedly optimistic about its chances with radio. Johnny, you told me, “We have some songs on our next album that I think will fit in.” It didn’t exactly work out.

Johnny: I don’t know what we can do. We try to figure it out. You want to stick to your ideals and still put out records that you feel are what’s best and not sell out or go disco. We got picked as the runner up album of the year by Rolling Stone. After the album came out, we were real optimistic and then they told us it wasn’t getting any radio play – again – and then we were slightly down.

The Rock ‘n’ Roll High School movie opens next month. You guys play yourselves and your No. 1 fan, played by P.J. Soles, tries to get you to play her high school. There’s a great soundtrack I know – Nick Lowe, Alice Cooper, Blondie, MC5, Eno and of course you guys. You’re celluloid punks! Now, I hear that Phil Spector is producing your next album. That seems like quite a switch to the wall-of-sound guy. What can you tell me?

Johnny: I like him. We don’t know how we’ll be working with him or how much we’ll have to say. He’s already mixed two of the songs for the [Rock ‘n’ Roll High School] soundtrack, [“Rock ‘n’ Roll High School” and “I Want You Around”] but we’re only gonna put one on it. [Jim’s 2019 note: Both made the film and soundtrack.] We haven’t even heard them yet. Maybe Spector will make a difference. If they [radio] see you have a big famous producer maybe they’d be interested in at least listening to the album.

What are some of the song titles?

Johnny: We never wrote a song with “rock ‘n’ roll” in the title before and now we wrote two. We’ve got “I Want You Around,” “This Ain’t Havana.” Joey had one that was called “I Don’t Care” but we have to change the title ‘cause we already wrote an “I Don’t Care.” [on 1977’s Rocket to Russia.]

[Outside the dressing room, we hear a \loud female voice, exhorting the crowd to do something impassioned. Later, we find out it’s DJ Tracy Roach urging support for the WBCN jocks who are on strike. WBCN is Boston’s big rock station. They actually played the Ramones. Dee Dee becomes alarmed.]

Dee Dee: Sounds like a radical! What’s going on? We shouldn’t have radicals.

[I decide to switch topics.] What are your favorite TV shows?

Dee Dee: I hate cartoons. I can’t help myself. I used to like ‘em when I was a little kid. I would never watch a cartoon now.

Johnny: I watch ‘em once in a while. I watch “Bugs Bunny.”

Dee Dee: When you get old, you don’t like to watch …

Dee Dee: That’s the one I like. That’s not a cartoon, though. But there’s nothing wrong with Alfalfa and Buckwheat. I’d like to have them around with us.

Dee Dee: I guess we feel sorry for them.

Johnny: I think they did too much LSD. I’ve heard “Truckin’” or something like that.

Dee Dee: I never had any interest. I saw some pictures of them when I was a kid and they looked so awful. They had that Pigpen – I didn’t want to listen to a group that had a guy named Pigpen.

Let’s talk press, particularly the English press. There seems to be a lot of love/hate going on.

Johnny: They all gave Road to Ruin a bad review. The only bad ones I read were in England.

Dee Dee: They build you up one week and tear you down the next. But, you see, it really doesn’t affect us ‘cause no matter what anybody says we still go out and sell out everywhere we play.

Dee Dee: ‘Cause they want us to be dumb. They think it’s cute if we’re dumb.

Johnny: The papers over there talk to you and then they make up their own story. They just take what you say and they quote you but they put your answers to different questions. And they have you going “duh” before every line. They have us coming from Brooklyn when we come from Queens. No matter how many times we tell ‘em, they say “Da Brooklyn Brudders – duh, duh, duh.”

Johnny: It’s funny, you know. They keep saying these guys are so stupid that all they do is sit and stare at the walls and they can’t even talk. That these guys are too stupid to even have a drug habit.

Dee Dee: The kids are like that. They even come over to you and …

Johnny: … they ask you do put an X on the piece of paper ‘cause “We know you can’t sign your name.”

It’s probably wrong to say there wouldn’t be an English punk scene without you, but you lit the fire when you went over, that July 4th gig in London during our Bicentennial year. What do you recall?

Johnny: We went there and met a bunch of kids that came to the sound check and they asked if we could get them in ‘cause they had no money. So, we snuck them in. They said they were starting bands and it was the Sex Pistols, the Damned and the Clash, The Clash hadn’t even started but they were going to start after seeing us and the Sex Pistols were together in a couple of weeks.

Did you realize you were at the forefront of a revolution?

Johnny: You never think about it. We didn’t have any conception when we started. We had nothing to do. We weren’t liking any of the music and we just decided to start a group. When we started off, we were going to play other peoples’ [songs] but I don’t know, we couldn’t figure them out or something, so we sat down and started writing right away.

We knew CBGB, which no one was playing at, and we just went down and asked if we could play and they said “Yeah” and we just played there. We worked a lot, playing there regularly – more or less as much as we wanted.

The band was, what, 16 months old when Sire took a chance and signed you?

Johnny: It wasn’t much of a chance because it wasn’t much of an investment. The first album only cost $6400, so they weren’t risking much. They did go out on a limb ‘cause nobody else was willing to take a chance, so they were taking a slight chance, but they really didn’t have much to lose. We had a following in New York, so we were going to sell something.

Rolling Stone recently did a piece on you and they revealed your real names – you weren’t all really Ramone brothers. Did that bug you?

Johnny: It bothered me when I first saw it, but it makes no difference. The only reason we did it to begin with was, really, we didn’t want to tax anyone’s thinking to have them remember our last names. We figured they’d have a hard-enough time learning our first names. We figured no one would want to learn our last names so we’d call ourselves “Ramones” and make it really easy.

Dee Dee: The only reason we did it was because of T. Erdelyi [that would of course be drummer-producer-songwriter Tommy Ramone]. Who’d wanna have a guy in a band with a last name like that!? We did it to cover up for him.