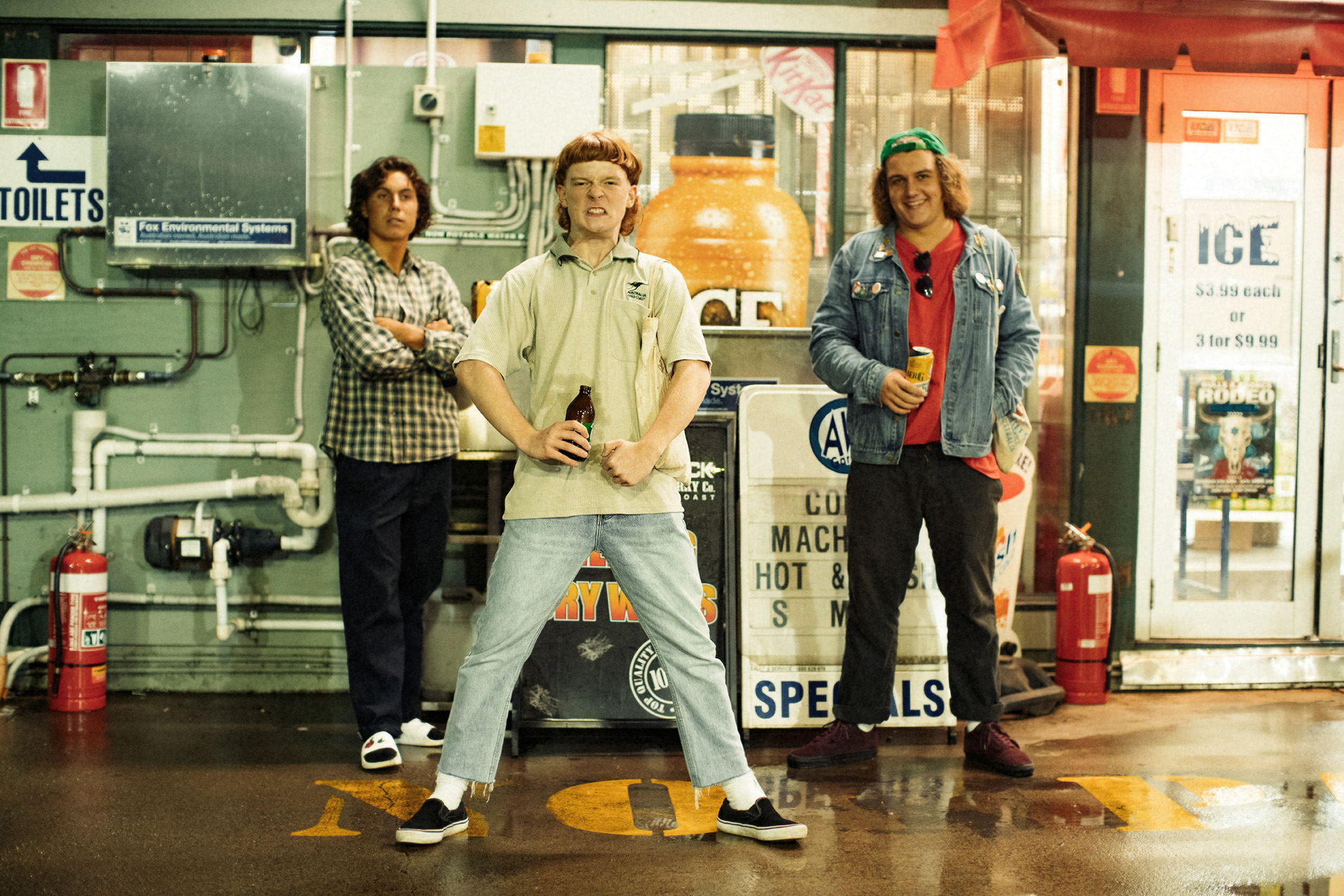 A video of three Australian teens caught fire on the internet in 2017. Clad in neon surf gear, the trio tear through a three-minute ode to hoagie rolls, smoke breaks, and Sunshine Coast heat in what sounds like the island nation’s new national anthem. “Smoko” clocks in at just under 7 million views today, and what could have been 15 minutes of fame has turned into sold-out tours with Iggy Pop and Queens of the Stone Age, thanks in part to Dave Grohl, who discovered the viral video and tipped them off. Now, this scrappy, mullet-clad trio have become an enduring force — they’re the neighborhood rascals who moon passersby and egg your house, and whose musical ambitions are only to soundtrack you and your mates’ party and drink heaps of beer.

I caught up with Eamon Sandwith, the bassist and vocalist of the trio, ahead of the band’s first tour of the States.

Made with only a $5 budget and an afternoon to kill, the visual for “Smoko” feels like a high school project documenting a day in Queensland. Within 24 hours of posting, the video was seemingly everywhere, its distilled dose of Australiana proving a potent hit.

“I had random people calling me and messaging me every day, all day. It was a fucking headache.” Now, the band has a team of managers, who “do all the hard work for us while we sit back and think about how we’re gonna sell out in five years,” he jokes.

Before all the attention, The Chats were like any other high school band, though instead of the customary garage, they opted to rehearse in a shed (which is apparently just a Chats thing and not an Aussie thing). Josh Price, who handles guitar and backing vocals, met Sandwith as far back as middle school, when the two were just discovering records by the Ramones and Misfits. They met drummer Matt Boggis sophomore year of high school and “became best friends instantly.” The trio all still live within 15 minutes of each other, and are as likely to be listening to contemporaries like Uranium Club and Eddy Current Suppression Ring as they are Gang of Four or Black Flag.

“I mostly have the internet to thank for my teenage obsession with this music,” Sandwith said, “but I also have to thank my Dad for showing me a bunch of classic Aussie punk bands like
Radio Birdman, The Saints, Cosmic Psychos, etc.”

Their early days were spent playing parties, as they were too young to play any proper venues.

“Some people liked us, but most hated us. I remember once we got booed off and people threw
beers and stuff at us,” he recalls of the pre-Smoko era. Now, the band are fielding personal
requests from Josh Homme, who has allegedly watched the “Smoko” video numerous times with Iggy Pop.

“We never considered our music to be anything special, and when you hear that people like
them listen to your shitty music it kinda freaks you out,” Eamon said, “Iggy, QOTSA and
Foo Fighters were all bands we listened to/admired as kids, so it’s a total spin-out for us.”
All the attention has turned into headlining tours at home and in the UK, along with a publishing
deal from Universal. “Mum was pretty stoked. We celebrated by taking all the money Universal
gave us to the casino. Put it all on red.”

The three bandmates turn 20 this year, and kill time between tours with a “drink at the bowls club.” The band’s press release lists Boggis as a pro skater, but Eamon assures me he’s only semi-pro, though he admits “he’d claim he’s pro if you asked him.” They’re “nothing special” insists Sandwith throughout the interview, though that average-joe quality is likely what makes them so qualified to pen anthems on pub food and smoke breaks.

“Hopefully we can just keep winging it like we have been this past year,” writes Sandwith. “Everything seems to be going pretty well and we haven’t really fucked anything up yet. We just wanna play music and have a good time.”

The band aren’t overthinking their recent success, instead looking forward to their first time in the States. “I’ve heard your fast food is something to be reckoned with,” he jokes ahead of their approaching US dates, almost every one of which has been moved to a larger capacity venue.

Ahead of the tour, the band has a new single and video entitled “Pub Feed,” an ode and
thorough introduction to greasy Outback bar slang that perfectly captures their fascination with
the food group.

Eaamon also sent us a list of Aussie bands to check out, which you can find below: