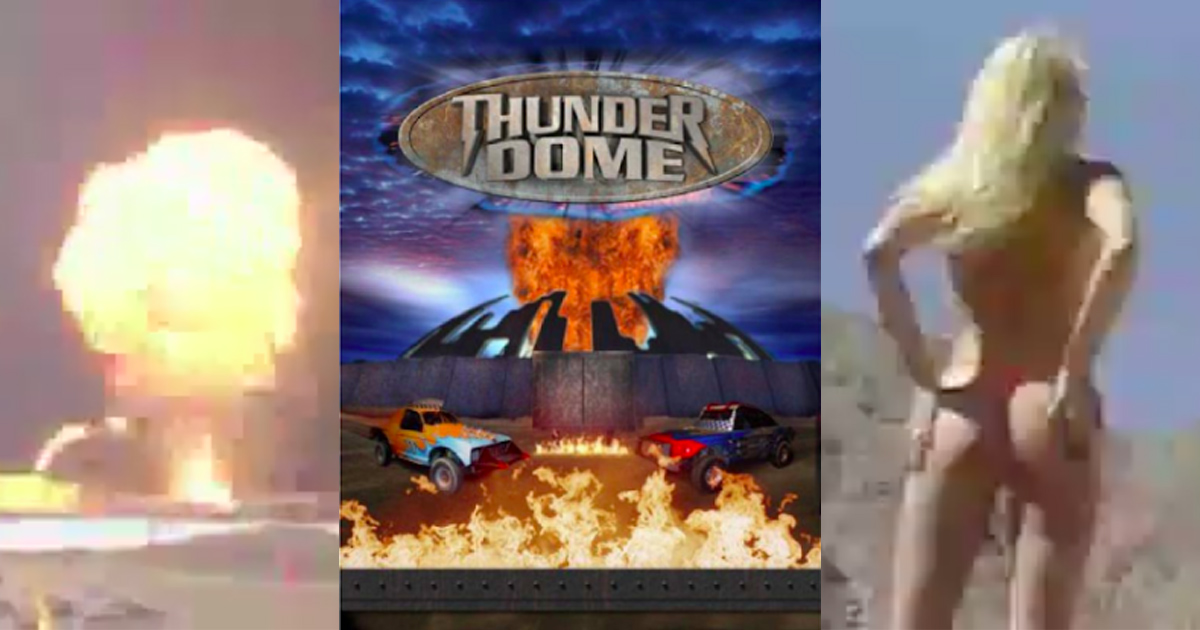 Unearthing ‘Thunderdome’: The Show Too Dangerous for Everyday Sports and Too Sexy for Primetime

Last week I told you about my multi-year investigation into Thunderdome, the lost show from my childhood that is nearly impossible to find on the internet. With the help of several readers who joined me on my quest, I have since gathered enough information to tell the whole story.

The following is based on interviews with several people involved in the creation of Thunderdome, documents corroborating their stories, articles from the time period, and defunct websites archived by the WayBack Machine.

Thunderdome was mostly shot in a single day, with all iterations and format changes being created in post. The show reportedly cost $40 million to create. There were eight episodes, but only one or two aired.

Thunderdome was funded in part by Robert E. Petersen, a publishing, aviation, and real estate mogul who founded Motor Trend magazine and lived an eccentric rich guy life. He owned a Civil War-era cannon and a car museum, and he frequently went big game hunting in Africa. Peterson got his publishing start founding Hot Rod magazine in 1948. He sold the first copies, which weren’t much more than newsletters, for 25 cents at races on the dry lake beds of the Mojave Desert, according to his obituary.

The production company Associated Television International thought Thunderdome would be a hit, according to a Los Angeles Daily News article from 2001 titled “Drive to the Extreme: Motor Sports TV Show Takes a Tip From Pro Wrestling,” archived here. They looked to own the whole project outright, shooting a pilot before any networks showed interest.

ATI’s gamble was that pro wrestling fans wouldn’t mind replacing a ring with a racetrack and having rivals settle disputes by crossing the finish line instead of pinfall. Twisting the rules of professional wrestling wasn’t a new idea for ATI. The company also produced American Wrestling Federation, which looked to institute boxing-like timed rounds and judges into pro wrestling. The organization folded in 1996 for financial reasons after the show “failed to gain a following,” according to Wikipedia. WWE Hall of Famer Tito Santana was the last AWF champion.

A reader who was better with the Wayback Machine than I am was able to unearth the trailer for Thunderdome. Apparently the February 2006 capture of the official site still had the files, as opposed to the other captures, which were broken or blank.

Prepare yourself for everything I could have ever hoped for before clicking the play button:

The trailer, which seems to throw in the word “extreme” randomly (i.e. “Get ready! It’s Thunderdome … Extreme!”) is pretty much the glimpse of the show that I sought to find on my original quest. And, honestly, it is pretty extreme. Especially the part where the announcer grunts that Thunderdome is “too SEXY for prime time” while flashing soaking wet bikini crotches. That is pretty extreme. But it got me thinking: who were the people who made this? I needed to get inside the minds of the people responsible. 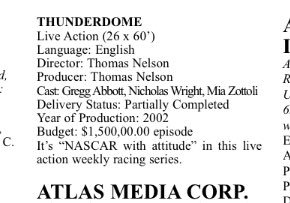 According to Glackin, Thunderdome was shot in an old abandoned quarry or some similar surrounding. The stands, track, and structures were all built just for the shoot. A film permit for the taping of Thunderdome’s pilot pinpoints the location at 34.7117°N 117.0559°W in Stoddard Valley. Here’s an aerial shot.

I guess Mr. Motor Trend never lost his love for cars racing around in the desert.

“You didn’t notice anything strange about the audience?” Glackin laughed when reached by phone in Mississippi, where he currently directs commercials. “We got a bunch of these dummies, cardboard cutout extras. I mean there were some people in there for movement. But we had a variety of these cardboard cuts — 2D pictures of people — made to fill the stands.”

I didn’t remember this part of the show. I asked why a production would risk the audience looking totally fake as opposed to just letting people come to the taping.

“It’s cheaper,” Glackin explained. “You don’t have to feed cardboard.”

The explosion I remember? Glackin said it wasn’t a model. It was real. Glackin is sure of that, because his main responsibility was keeping everyone safe during the stunts. They brought in a professional pyro guy to blow up the structure (which is shown in the trailer).

“No one got hurt. Well, okay — so in a way [someone did],” Glackin explained with a chuckle. “We were already done with the car stuff and were filming the two hosts sitting at the desk announcing it. We had got through all the stunts and the guy cut his finger on the side of the desk.”

I asked if he remembered shooting the “Women of Thunderdome” segment or the pool. The pool part didn’t ring a bell, but he said that segment was done on a different day. He remembered parts of it.

“Some hotties, too, from what I remember.”

Cliff Calabro worked as audio mixer on the show, and even he had trouble finding proof of Thunderdome existing when he went to Google search it.

“This was when the internet started becoming usable — dial up was like forget this,” Calabro said. “I looked around for the show and couldn’t find anything. It was pre-social media, pre-everything, and the show didn’t really take off.”

Calabro said a lot of audio wasn’t captured, with engine sounds, tires on dirt, and crashes all needing to be crafted in post. Or, to put it simply: “a complete sound design nightmare.”

“That show was completely manufactured. We only had one day of shooting. This wasn’t like a weekly episode and people were showing up. We had to manufacture a show that didn’t really exist.”

The Wayback Machine shows the Thunderdome site as pretty barren. There is a shift in the wording between 2003 and 2004 that changes from “competing weekly” (ostensibly via a TV show) to “exclusively via PPV.” The various iterations of the product, all of which were created in post, must have been part of the reason IMDb, Google, and many other sites had a hard time pinning down exact information about the show. Glackin had another explanation, though.

“I mean this thing was low budget and it definitely had a cheese factor. It was not something everybody was crazy about or thought needed to survive,” he explained.

“I don’t think we got past one or two episodes before it was cancelled,” Calabro remembers. “But I think there was 7 or 8 episodes made.”

Both sources brought their voices down to a soothing tone at one point in the interview to let me know that the show’s races were predetermined. They worried I may have been duped, which means they must have thought I was a little off. But, I suppose I did track them down 20 years after they worked on a cancelled show, even though people who worked on the show can’t even find it online. So, yeah, I guess I might have been coming off a bit unhinged.

I also tracked down Jim Romanovich, who currently holds the title of “President of Worldwide Entertainment” at ATI. He politely refused to let me see the Thunderdome tapes.

“That series was 20 years ago and very short-lived, unfortunately, as TNN was going through some growing pains from being The Nashville Network to The National Network and then to Spike. Now it’s Paramount Network. I appreciate your fascination with the show, but it only had 8 episodes and there’s no reason to run it. However, you never know. But at this time there’s nothing really to talk about and the video that still exists is buried deep in one of our vaults (think Indiana Jones).”

I asked Romanovich if he was the voice announcer for Thunderdome. Others who worked on the show thought they remembered that. Then, I asked to get into the vault again.

“No, that wasn’t me. Thanks again for your interest, but we don’t allow people to go into our vaults unless they work for us. I’m sure you’ll see it at some point on some digital channel as we empty our vaults.”

Denied again. But he revealed some crucial information about this mysterious vault where he hides shows like Thunderdome from hard working journalists like me: Nobody gets in that doesn’t work for ATI.

At that point, I had no other option. I refused to go this far without getting my hands on the Thunderdome tapes. Romanovich wasn’t budging. So I sent him my resume. 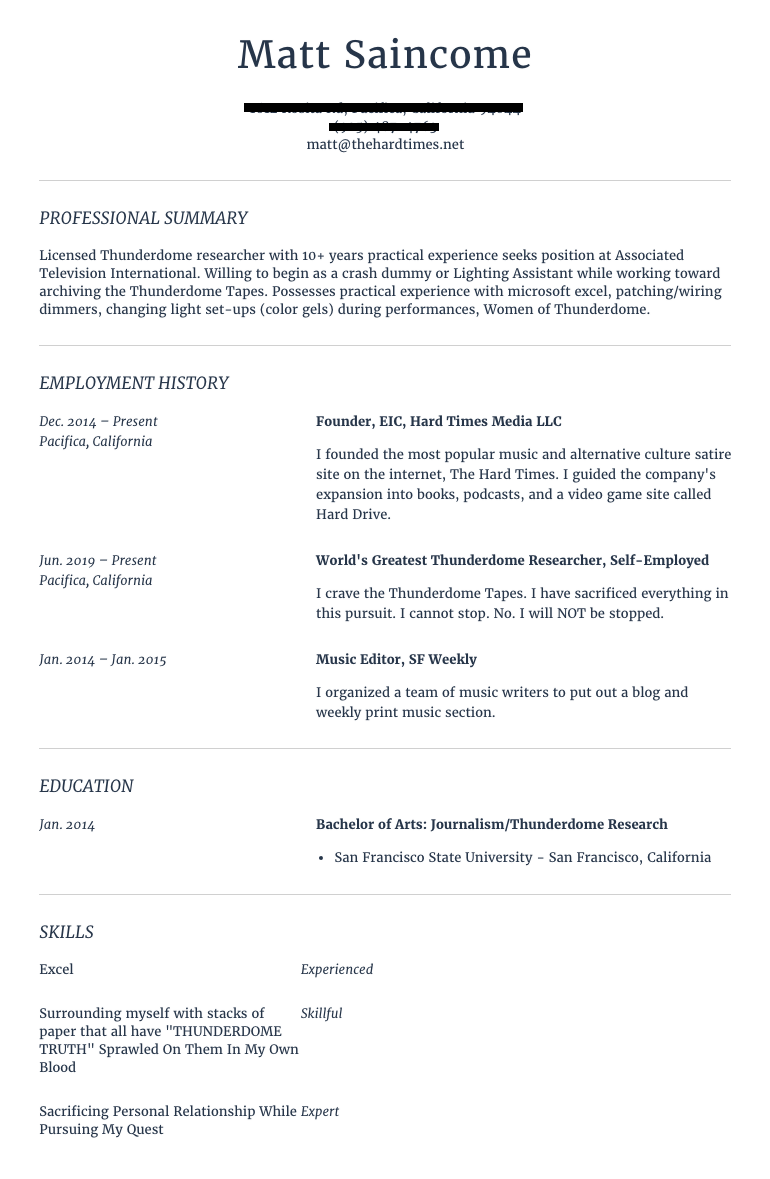 Others who worked on the show told me they may still have the tapes or scripts. Some even promised to search their personal collections for me. I appreciate their generosity, but I already booked my ticket to LA to show up at the ATI offices for my interview. I will take any position, Jim. Answer your phone. I’m outside right now.