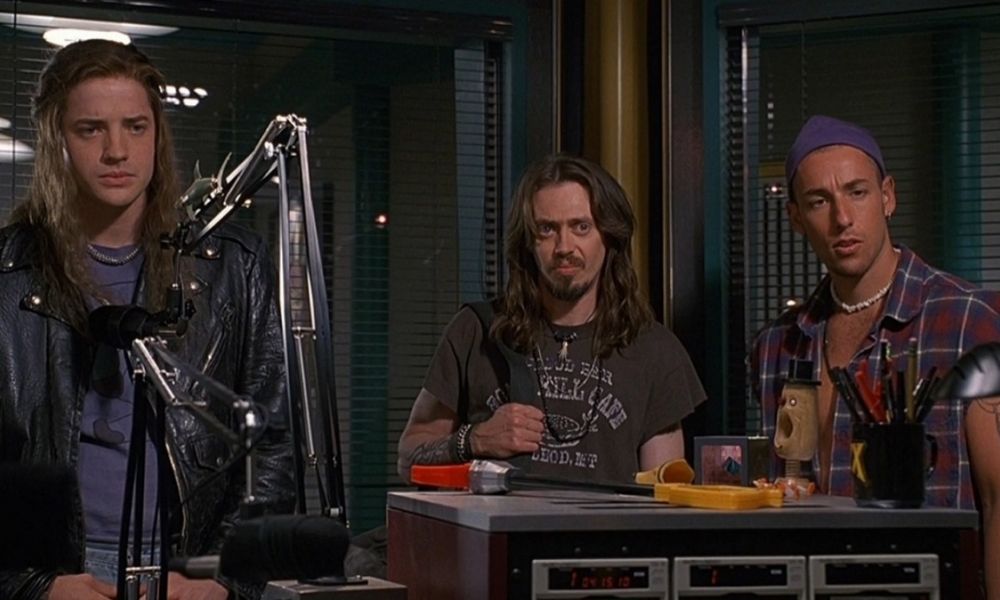 How Reagan Youth (Eventually) Got ‘Aerosmith Money’ Out of ‘Airheads’

“They came up to us and said, ‘We’re covering your song and we named our band after the song … we’re gonna make you a lot of money.’”

Bakija, better known by his stage name Paul Cripple, was with Reagan Youth singer Dave “Insurgent” Rubenstein at the time of the conversation with Malin and Wildwood. The pair may have been flattered by D Generation’s prophecy but they had few delusions.

“Dave and I said, ‘We’re not gonna hold our breaths.’”

And yet D Generation did manage to turn over what Bakija calls “Aerosmith money” for Reagan Youth — albeit probably not in the way he expected. At the center of this strange yet somehow predictable industry story is, of course, the 1994 Brendan Fraser comedy Airheads.

Penned by Rich Wilkes and directed by Michael Lehmann of Heathers fame, Airheads tells the madcap story of three heavy metal washouts — Fraser, Steve Buscemi, and Adam Sandler — who are so desperate to make it with their band, the Lone Rangers, that they take over a radio station with water pistols to force their demo recording onto the airwaves. Things quickly go awry when the station’s equipment shreds the tape. The song on that demo that listeners hear being eaten in real time? Reagan Youth’s “Degenerated.” Specifically, a re-recording of “Degenerated” sung by Fraser with instrumental backing from Phil Buerstatte, J. Yuenger, and Sean Yseult of White Zombie.

Melodic and anthemic and boasting a few semi-satirical guitar solos, the original “Degenerated” steps slightly out of hardcore bounds to suggest exactly what happened here — reinterpretation by a more mainstream act. Little else about Reagan Youth lends itself to a mid-’90s Hollywood comedy. The band’s 1984 debut Youth Anthems For The New Order baits potential listeners in both title and imagery; the cover shows a Klansman patting an adoring toddler on the head. Anyone who bought the LP quickly learned that Reagan Youth were violently opposed to toxic hate groups. “Death to the Nazis and the Ku Klux Klan!” Rubenstein screams on “New Aryans.” If you miss that, there’s the entirety of “I Hate Hate” (“Why waste the life you live? Live’s to love, I’m positive!”). Acolytes of their namesake are dismissed as “godforsaken” and “brainwashed.”

Reagan Youth’s initial burst of hardcore energy lasted until 1990 (versions of the band have since played reunion shows). After that, Bakija and Rubenstein tried to get other projects off the ground before the latter’s fatal overdose in 1993 (a heartbreaking coda following the death of Rubenstein’s mother in a car accident and the murder of his girlfriend Tiffany Bresciani by serial killer Joel Rifkin). The makers of Airheads weren’t aware of any of this, apparently, when they discovered “Degenerated.” That’s because they first heard the tune on a four song demo submitted to them by D Generation. Rapidly rising darlings of the rock press who around the same time were preparing a self-titled debut album for Chrysalis Records, D Generation seemed like a perfect fit for Airheads. The filmmakers zeroed in on “Degenerated”; though the band members tried to dissuade the song’s inclusion, they also weren’t forthcoming about its true origins. At least that’s what a representative for 20th Century Fox, the studio distributing Airheads, told Bakija after they telephoned the guitarist for a fact check.

“When Fox contacted me, they asked, ‘Is this your song?’” Bakija recalls. “I asked, ‘What did D Generation say?’ And basically they never, ever said it’s a Reagan Youth song … for like six months, [they never said] it wasn’t their song.”

The studio rep commented about Reagan Youth’s “sporadic” output “way back when.” Ironically, Youth Anthems For The New Order had in fact just been released on compact disc, presented with Reagan Youth’s second LP, 1990’s Volume 2. Bakija mentioned this and the rep asked his secretary to check Tower Records. The chain didn’t have the CD (titled A Collection of Pop Classics) “but the [Tower employee who helped look for it] said good things.”

Malin phoned Bakija soon thereafter, ostensibly to smooth things over. Bakija’s wife at the time, an actress, took the call and “berat[ed]” the D Generation singer. She then placed her own call to Airheads co-star Steve Buscemi, with whom she was about to work on the film Trees Lounge. Mrs. Bakija demanded Buscemi tell Fox they can’t “use a song that don’t belong to you.” The Reservoir Dogs actor delivered some unexpected news — they’d already filmed all the scenes with “Degenerated.” Bakija lawyer’d up, leading to a large payout for himself and Rubenstein’s surviving family (the parties receive a bi-annual check from Fox to this day).

“I was left with a choice,” says Bakija. “Accept the money or look like D Generation’s bitch. I chose the money over looking like a bitch for D Generation, who have a song on the Airheads soundtrack and covered ‘Degenerated’ on their first and second album.”

Indeed, D Generation’s acclaimed 1996 sophomore effort No Lunch (praised in a four star Rolling Stone review as “tough, taut, and charged with manic adolescent panic”) concludes with yet another recording of the Reagan Youth song that so heavily inspired them. D Generation’s contribution to the Airheads soundtrack, “No Way Out,” also appears on their first two albums.

Jesse Malin did not respond to an interview request for this article. Speaking about Airheads to Downtown magazine in 2015, Malin seemed to confirm speculation that D Generation felt bitter about not being picked to be “the real” Lone Rangers. When the interviewer commented on the “coincidence” of D Generation’s soundtrack contribution and “Degenerated” being in the film, Malin responded: “They used our version of the Reagan Youth song as the reference for the fake band in that movie. At the time, we were young and pissed off about it. We felt gypped, but now I think it’s kind of funny and everyone in that movie went on to do a lot of great things. We barely got paid.”

None of this rock drama touched Brendan Fraser when he sauntered into the booth to put his spin on “Degenerated.” In fact, that session was wonderful, according to Sean Yseult. Fraser was “so nice, and almost a little shy,” she says. “He got the song right away and it was really fun to play with him. This was my first chance to play bass with another singer, and he was great.”

Yseult had been a fervent Reagan Youth fan when the band was tearing up New York City in the early to mid ‘80s. She even briefly shared living space with Dave Rubenstein — her roommate Tracey dated the singer for a time. “[Dave] was such a cool guy,” Yseult says, “and it was never awkward having him around. So kind, so interesting, and easy-going despite his stage persona.”

25 years after Airheads, Paul Bakija says he never got in his emotions about the “Degenerated” deception, remarking that D Generation were the ones who “had hard feelings, not me.” He and Wildwood have played together in a project since then. Further proof of Bakija’s benevolence can be found in a July 2016 posting on his Facebook page. It’s a picture of several Jesse Malin solo LPs with a caption that professes Bakija’s fandom.

“So I’m walking home and lo and behold what do I find on the sidewalk … No way I’m leaving these to get warped in the sun. Always liked Jesse and respect his musical abilities too much to walk on by and not take these babies home.”