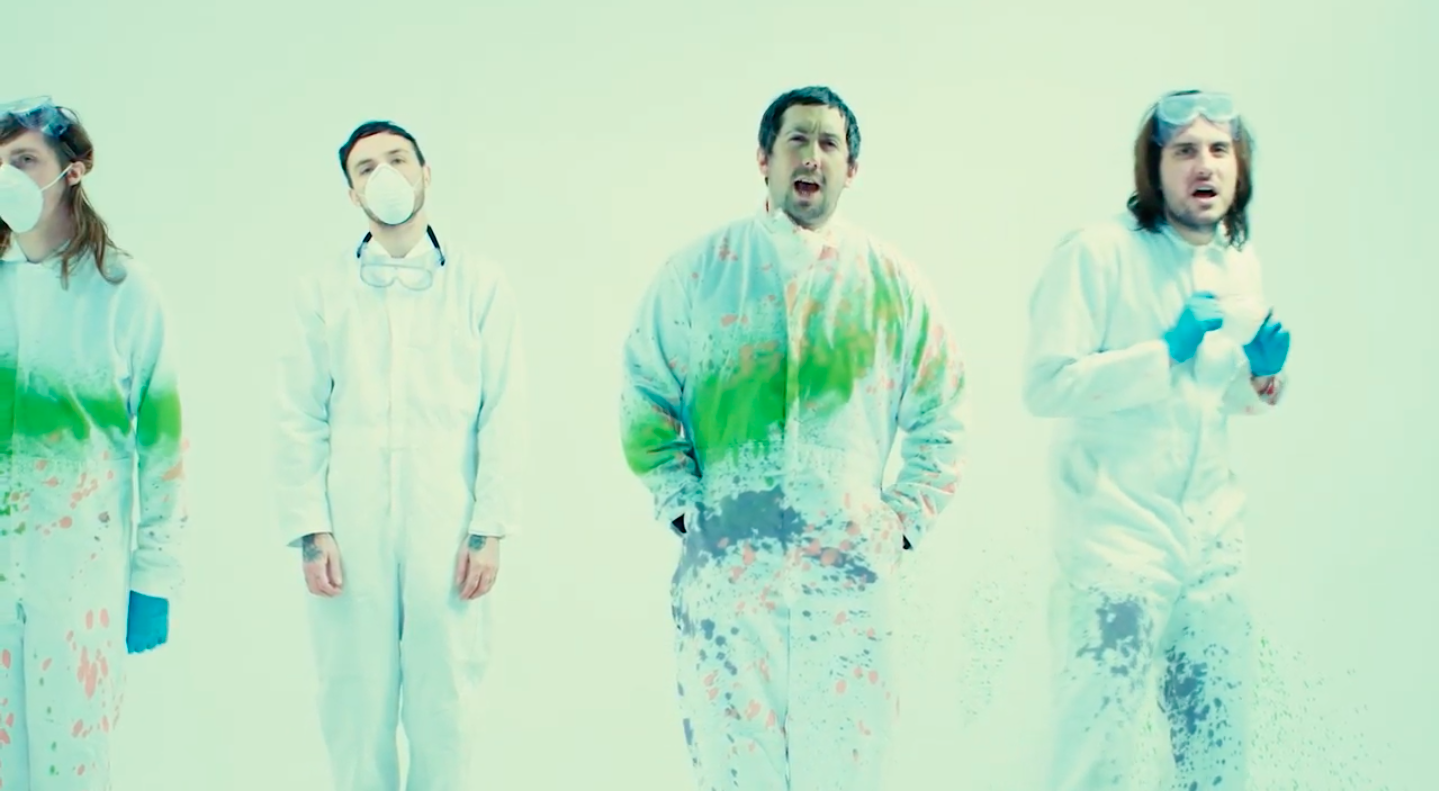 It wasn’t until the 2010s that hardcore and shoegaze truly became siblings. There were weirdo acts in the ’90s, of course, like Swirlies (a noise-poppy shoegaze band that rubbed shoulders with Boston hardcore) and the short-lived Kill Holiday (a Ride via The Smiths-type shoegaze band that was fronted by Steven Andrew Miller of influential metalcore wreckers Unbroken). But the constant mixing and matching of genres over the last decade has allowed shoegaze and hardcore to form an unlikely yet complementary bond.

It’s only after this period that you can find kids wearing Forced Order t-shirts with Pity Sex five-panel hats — the dichotomous sort of guy who refuses to mosh for the opener and then crowd-kills during his buddy’s set, but also tries to flirt in between bands by ranting about how Isn’t Anything is far superior to Loveless. Beware: one of them might even drag you into the deep water and ask your thoughts about the blackgaze movement. There’s a weird, dangerous new breed out there, and you’ll need a guide to be prepared for your inevitable confrontation.

Below is an introductory (but by no means exhaustive) list of shoegaze bands that emerged from the ashes of, or in conjunction with, hardcore bands of the 2010s. It’s a fascinating collection in and of itself, but this knowledge could also help you in a time of need.

Philadelphia’s Nothing are the quintessential example of gnarly hardcore vets flipping to shimmering shoegaze. Singer/songwriter Dominic Palermo, who fronted the 2000s hardcore unit Horror Show, has been through some shit, and he’s remarked that through this otherworldly — and obscenely loud — style of music, he’s able to channel his harrowing life experiences with the right balance of poignancy and might.

Nothing are the biggest-sounding and most dynamic band on this list. They’re utter masters at transforming an inching dream-pop ballad into a storm of pulverizing riffs, while still retaining its innate melodicism. There’s nothing to two-step, throwdown, or push-pit to in their songs, just celestial croons drenched in effects and crunchy grunge riffs soaked to the bone in reverb. Rarely can a band pair beauty with brutality the way Nothing does, and by that token they’re the perfect starting point for heavy fans in search of a break from the breakdowns.

Pity Sex arrived at the same time as Nothing (both bands dropped their debut EPs in 2012), but in a city about an eight-hour drive Northwest. The Michigan quartet was formed by a couple hardcore kids who were jonesing for a new creative outlet, and they ended up putting together a band that honed in on a very sullen, emo-ey take on shoegaze. Their songs are swaying, chilly, and poppy in the way Tigers Jaw or Pixies (who they covered) are poppy. But their most distinctive characteristic was the way their co-vocalists traded singing. Brennan Greaves’ dispassionate deadpan contrasted Britty Drake’s naturally pretty yet blankly-delivered murmur, together giving the group’s thick riffs an eerie overtone. The group broke up in 2016 after just two full-lengths, but in hindsight their gloomy sound did feel like a Midwestern response to the genre — which made sense at the height of the emo revival, when scores of bands were drawing influence from the region’s history as emo’s premiere hotspot.

Adventures certainly aren’t a traditional shoegaze band, as the vocals come through cleanly and the drums sound pretty clear compared to the hazy guitars and basslines. But on their sole full-length Supersonic Home, the vocal patterns are drawn-out enough, and the overall production is washed-out enough, to indicate an obvious influence from the genre.

Adventures are made up of three of the members of beatdown titans Code Orange, who’ve boldly added industrial and nu-metal flourishes to hardcore in a really forward-thinking way. So it checks out that their melodic side-project would be equally indefinable. Their easiest comparison is actually their friends and split-mates Pity Sex, but their brief catalog also pulls from the overcast yet melodic alt-emo that was popularized in the early 2010s by bands like Citizen, Turnover, and Seahaven.

Featuring members of Ampere, one of the most distinctive and intense screamo bands of the last 20 years, Kindling make gorgeous shoegaze that sounds more like pioneers such as Chapterhouse and Lush than others on this list. However, the band has some heat under the hood that occasionally combusts into flares of punkiness and blazes of crunchy bounce. The musicians in Kindling have been playing at least a decade longer than most of the groups on this list, and their confidence and natural ability to capture the genre’s essence is evidence of their seasoned careers.

Title Fight’s pivot to straight-up shoegaze in 2015 was pretty contentious. The beloved melodic hardcore via pop-punk band pivoted not to big-room alt-rock or squeaky clean power-pop, but to worn-out shoegaze that sounds like the aforementioned Swirlies at its peppiest, and leans closer to Low-style slowcore at its dreariest. There are still traces of post-hardcore in the yelps and drum tumbles of “Hypernight”, but the guitars blanket everything in clangy reverb that yanks at the tail of its momentum.

Hyperview is a record that was seemingly designed to hush the raucous rooms full of energetic, Bane shirt-strapped kids the band normally plays to. And it’s one that had an iconic effect, bringing the two styles together not just on the same bill, but in the same set.

Whereas Title Fight’s shift out of heavier material was at least somewhat expected (given their 2014 EP Spring Songs and a couple of the slow tracks on 2012’s Floral Green), the bulky melodic hardcore smashers Hundredth converting to the gaze was a complete 180. The band had entrenched themselves in the metalcore/melodic hardcore grouping of bands like The Ghost Inside, Stick To Your Guns, and Counterparts, and then suddenly their fourth album totally abandoned that for heavenly vocals and spiralling shoegaze leads. The result is a sound that lands somewhere between Balance & Composure and DIIV, the pulsating drive of the latter melded with the grungy alt-rock explosions of the former. I like to imagine them as having heard Hyperview and immediately saying “hold my beer.”

Dream Ritual are hardcore dudes from Missouri who decided to make shoegaze that sounds like a combination of Swervedriver, Smashing Pumpkins, and Deep Purple. But they recorded their 2019 mini-album Trips Around The Sun with Arthur Rizk, the guy who produced Code Orange’s Forever, Power Trip’s Nightmare Logic, and Trapped Under Ice’s Heatwave. So take the person who’s worked with three of the most important hardcore bands of the 2010s and have them tinker with wailing fuzz riffs, thundering drums, and a super grungy voice. Dream Ritual have the force of Nothing but the grittiness of Dinosaur Jr. — except in another universe where the band is fronted by the Meat Puppets’ Curt Kirkwood. But their songs also feature some downright stoner rock riffs. It’s a very odd combination of sounds, and it all comes from a bunch of bored hardcore kids. Notice a pattern here?

Modern Color are the only band on this list that are simultaneously making hardcore and shoegaze. With the band’s debut arriving a year after Hyperview, the group was clearly influenced by Title Fight starting out. But Modern Color’s 2017 album is a strange amalgam of anxious screamo, hardcore, emo, and huge sheets of shoegaze. The vocals are reverbed heavily and the guitars are expansive, but their playstyle is taut and snappy. Although they veered closer to emo on their 2018 7-inch, the moves this band have made are indicative of the future of shoegaze and hardcore; not as platonic friends, but as a couple.