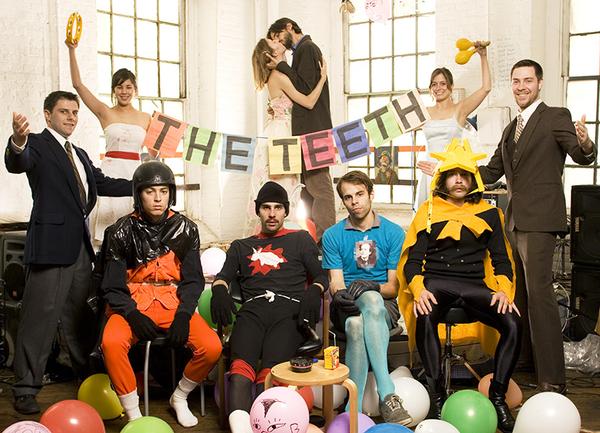 Things seemed to be looking up for Philadelphia-based indie rock band The Teeth in 2008. The band had released the album You’re My Lover Now the year before to some acclaim. They toured the country with Dr. Dog and performed at South by Southwest. They were signed to Park the Van records and were developing their own Beatles-inspired punk rock sound.

But the group wasn’t making any money. Aaron MoDavis, the band’s guitarist and singer, left the group. Peter MoDavis, his fraternal twin brother, who played bass and sang, formed another band, The Purples, with the group’s remaining members.

The year The Teeth broke up happened to be the same year the streaming service Spotify launched. People quickly forgot about The Teeth. But almost a decade later, one of The Teeth’s songs began showing up on people’s Spotify Discover Weekly playlists.

Every Monday, each active Spotify user receives a playlist, generated by an algorithm, containing 30 songs that match the user’s music taste. Spotify won’t divulge too many specifics about its algorithm — it separates the streaming service from its competitors — but it uses machine learning to suggest songs that other users with similar tastes enjoy.

Some songs show up more often than others. Matthew Ogle, who formerly oversaw Discover Weekly, told Quartz in 2015 that when several users encounter the same song, “something is happening in music culture, in the world.”

The Teeth’s “Ball of the Dead Rat” is one of those songs. The raucous, two-and-a-half-minute song has been played more than 1.2 million times on Spotify; by comparison, it has less than 40,000 plays on MySpace, where it was originally released in 2007.

It’s unclear what exactly caused Spotify’s algorithm to add the song to so many Discover Weekly playlists, but I wasn’t the only one who noticed.

The song’s YouTube comments summarize the phenomenon. “First heard this on my Spotify Discover playlist this week. Excellent tune and band,” writes one user. From another: “So happy Ive spent my free time on Spotify & clicked related artists like 5 times & stumbled upon this song, This is what the rest of the world needs..”

The only other person I know who was a fan of The Teeth told me his friend introduced him to them. When I asked his friend how she heard about them, she responded as predicted: Discover Weekly.

Not much has changed for Peter and Aaron MoDavis, though. They barely made ends meet when they were active, and revenue from streaming has been negligible, considering that Spotify often pays artists a fraction of a penny per stream. Peter now performs in a country band called Squawk Brothers, which he said spends more money than it earns. Aaron is a schoolteacher. Both are fathers.

Surprisingly, neither brother knew about the second life “Ball of the Dead Rat” has had online.

“People have said it before, that it comes up on different things,” Aaron said. “It’s always hard for me to tell in terms of how many plays something gets. The metrics of that are so big, I can’t wrap my head around it. I never know if a million’s a lot or not.”

Peter said that he never checked to see how well the band was doing online.

“I don’t really know what support it has,” he said. “It’s hard for me to tell how many people are actually listening to it. I haven’t made any money, really.”

Aaron called their royalties “comical.” “Every once in a while, we get a check for like three dollars from somewhere, and I never know where it’s from,” he said.

The Teeth just barely missed the streaming era and never developed a social media presence. Without the opportunity to turn online supporters into real-life concert-goers, they struggled.

“There was a lot of momentum building with getting on good tours, and then it would kind of slide back, and we would be playing somewhere in Michigan to nobody again,” Aaron said. “The band kind of broke up at the beginning of the social media era, and I guess we just got in quick enough for it to have its own life on it.”

The Teeth aren’t the only band fans have discovered years after they stopped performing. Nick Drake’s 1972 song “Pink Moon” was relatively unknown until it was featured in a 1999 Volkswagen commercial, bringing Drake to fame 25 years after his death. Other folk singers, like Vashti Bunyan, Sibylle Baier and Connie Converse, rose to prominence in the early 2000s when their older work was re-released.

The Teeth may not go down in the annals of rock history, but they maintain an audience more than 10 years after they disbanded — all thanks to Spotify.