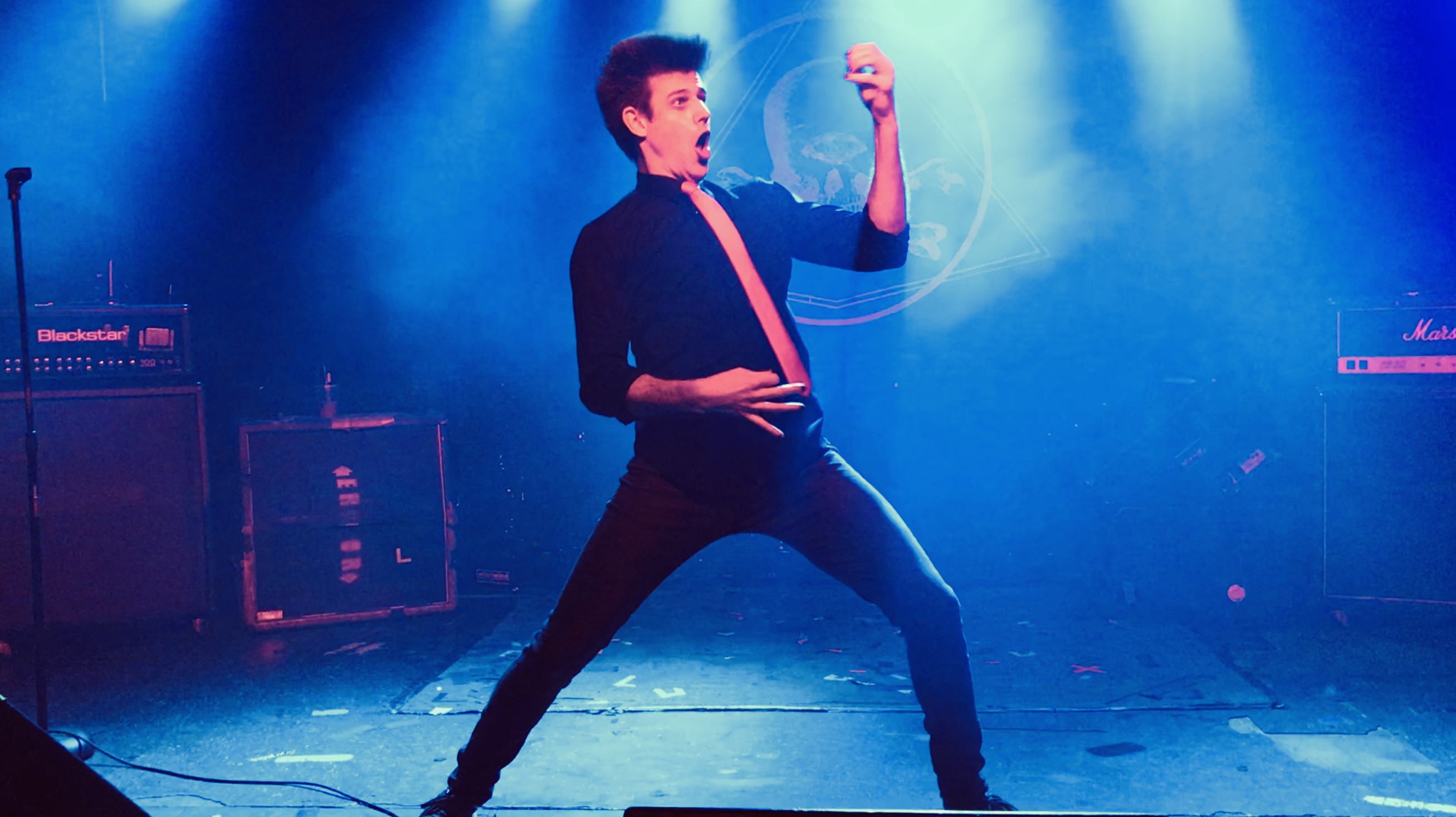 My 60 Seconds of Fame at the Brooklyn Air Guitar Championship

Nikki Fury jumped and smashed his skull against a low-hanging beam. It wasn’t part of his routine. Fortunately, his shimmering black wig — which paired nicely with his leopard-print vest and Queensrÿche undies — cushioned the worst of the blow. He rubbed his scalp with a playful smirk, then put his headphones back in and started strumming again.

“Can’t we have a single fucking competition without a head injury?” said Spudboy.

We were in the basement of the Brooklyn metal venue Saint Vitus, and I was getting ready for my first show ever. Thinking of all the legendary bands that had played on the stage mere feet above my head — Megadeth, Anthrax, Sick Of It All — I cringed at the thought of screwing up. But I wouldn’t be playing drums, or bass, or even singing. I’d be playing air guitar, along with my fellow competitors.

I had recently discovered that my favorite way to kill time on the subway has been an organized international sport since 1996. Every year, the world championship takes place in Oulu, Finland. National champions from Australia, Japan, Canada, Germany, the United States, and beyond come to shred, melt some faces, and hopefully be crowned the greatest fake guitarist on the planet.

“This is the stupidest thing I’ve ever heard of, and I wanna be the best at it,” Justin Howard tells me over the phone, recalling his first thoughts upon discovering the sport. Rocking the stage as “Nordic Thunder,” Howard won the U.S. title in 2011 and became the world champion in 2012, going on to perform everywhere from Qatar to the Arctic. He even landed a live appearance on national TV, and starred in his very own Dr. Pepper commercial.

“It started as this goofy thing, and even now, we take the art of not taking ourselves seriously, very seriously,” he says. “Air guitar is all about entertainment and fun, but it’s also a promotion of world peace. There are all these sayings, ‘You can’t hold a gun if you’re holding an air guitar,’ and ‘Make air, not war.’”

“The sayings may be cheesy, but there’s some truth to them,” he continues. “When you’ve got 20 people from different countries around the world, language and political agendas can be put aside, and you get these pure, unfiltered human connections. We want the world to see that peace can be made, even if it’s done in this very absurd form of art.”

I had always fantasized about becoming a rock star, but just never dedicated the time to learning an instrument. My shame for this shortcoming manifested in my dreams, where I’d find myself standing onstage before a crowd of people, guitar in hand, but without a clue how to play it. I’d wake up panicked yet exhilarated, my sweaty fingers still dancing along an imagined fretboard, desperately searching for a note that would ring true.

Then one day, my coworker Marquina casually mentioned that she was a former New York City air guitar champ who competed on Finland’s global stage in 2014. And when she added that this year’s local competition was coming up, I knew that it was a chance to turn my nightmare into a dream come true. With Marquina as the Mr. Miyagi to my Daniel-san, I had one month to get ready.

We met up on a toasty Sunday afternoon in a small park in the Lower East Side of Manhattan. We approached a vacant bench near an ongoing volleyball game, then sat down and got to work.

“Okay, so you’ll be judged based on three criteria,” Marquina said. “First is technical merit — when you play a high note, you’ve gotta slide your fret hand up the neck, just like you would on a ‘there’ guitar. When there’s a low note, slide your hand back down.” I nodded.

“Next is stage presence,” she continued. “You’ve gotta make that stage your own. Use really big strumming motions, stomp around, throw in some kicks — do whatever you gotta do.”

That part I should have covered. I told Marquina I do a weird sport called “tricking” that combines martial arts, gymnastics, and breakdancing. I told her I could mix in a couple flips.

“Yes, that’s perfect,” she said, her eyes lighting up with excitement. “And finally, you’ll be judged on ‘airness.’ It’s that je ne sais quoi aspect, that know-it-when-you-see-it quality that turns the routine into real performance art.”

I then took out my phone, and we listened to the sixty-second song clip I had prepared for myself, an edited excerpt of “This War Is Ours” by Escape the Fate. It was super fast, with a blistering solo in the second half — an ambitious choice to be sure, but if I could nail it, I hoped I’d blow the judges away.

We listened closely for the exact pattern of high and low notes. Marquina offered suggestions for hand placement but the proper timing still eluded me. It got even worse when we tried incorporating some jumps and headbanging into the choreography.

I tried once more, but still couldn’t quite get it. “I can’t even play a fake guitar,” I muttered.

A light drizzle had begun to fall, and we agreed to call it a day. “Just keep practicing,” Marquina said. She gave me a hug as we parted ways. “You’re gonna do great.”

Over the next few weeks, I studied dozens of air guitar videos on YouTube, trying to learn from the best. There was Smiley Rod, known for his blazing speed and wild abandon. There was William Ocean, who found creative, often theatrical ways to get the crowd on his side. And then there was perhaps the single most accomplished air guitarist in history, the 2016 and 2017 world champion, Matt “Airistotle” Burns. Watching Airistotle play air guitar is like watching Michael Jordan play basketball; you see a man who combines perfect fluidity with lightning-fast force, busting out where-the-hell-did-that-come-from type moves that leave you shaking your head in amazement.

But when I read that Airistotle tends bar in Staten Island, I felt a wave of dread crash through my body. I texted Marquina:

“Am I gonna have to compete against Airistotle?”

“No,” she replied. “He might show up to support his friends, but probably not competing.”

In the final few days before the show, I nailed down my choreography and practiced for hours, sweating my way through rehearsals in my small Brooklyn apartment and at a nearby park, where I earned a number of confused glances from passersby. I also decided on my character, a riff off my Halloween costume from last year: Billie Joe Airmstrong, the lesser-known twin brother of the legendary Green Day frontman.

At long last, the day of the competition arrived. I donned a black dress shirt and red tie, spiked up my hair, painted my fingernails jet black, and applied copious amounts of guy-liner. I then looked myself in the mirror, stuck out my tongue, and threw up some devil’s horns. Okay, let’s do this.

Shortly after I arrived at Saint Vitus I saw a small congregation of air guitarists chatting and sipping beers. As I approached, I got the sense that many of them were old friends, but when I hesitantly introduced myself, they immediately smiled and did the same.

I met Scotty Karate, a longtime air competitor who wore a full martial arts uniform and UFC gloves. There was Georgia Lunch, the reigning U.S. champion who already had a bye to nationals, but would be performing a medley of songs as a halftime show. And then I turned to—

“Oh shit, hey,” I said. We shook hands. He was tall and lanky, with glasses and a wide, cartoonish grin.

And just like that, the last of my self-confidence evaporated into the musty subterranean air. I was about to get up on stage — in front of two hundred people — to challenge the single greatest air guitarist on planet Earth. My friends, my roommate, my girlfriend were all here to watch me perform — what the hell was I thinking?

As I paced the floor trying to get it together, I passed another competitor, Spudboy, who was sporting a Devo-style energy dome helmet.

“Yeah.” I attempted a casual shrug. “Never done this before, you know?”

“Honestly, don’t worry about it so much,” he said. “Even if you mess up, we’re still gonna cheer for you.”

Remembering Nordic Thunder’s loving description of the air guitar community, it dawned on me that I didn’t have to win, or even do particularly well, to earn their camaraderie. To this ragtag group, what mattered far more than skill was a willingness to just fucking go for it — to let imagination displace reality, to channel the cosmic thrill of a wailing guitar, to unleash the fiery, senseless joy of being alive. A successful performance meant simply having fun and putting on a good show — for them, that was the whole point. And maybe it should be the point for me, too.

So when I stepped onto the stage and gazed out at the crowd, I finally felt like I was ready. I planted my feet wide, took a deep breath, and thrust a finger skyward — and the music began to play.

Despite an early hiccup in my choreography, overall I felt like it went well! After the final note, I walked in circles around host Shreddy Mercury, my rush of adrenaline still dissipating.

Two of the three judges loved my performance, offering stellar scores of 5.8 and 5.9 out of a possible 6. But when the third judge held up a lackluster 5.4, the entire crowd began to boo. “I’ll be the asshole,” he joked.

I ended up missing inclusion in the second and final round by a heartbreaking one-tenth of a point. But honestly, I couldn’t complain — I had played my heart out, and had a blast doing it. The hugs and high fives I received from friends, fellow competitors, and members of the crowd all confirmed that I could definitely count the performance as a win.

As for the competition’s fateful conclusion, Airistotle was crowned the 2019 New York City champion, earning nothing but perfect scores in both rounds. He unquestionably deserved the title, and would now be headed to nationals in Nashville, where he would compete against Georgia Lunch and other top performers from around the country.

Before everyone cleared out, the host invited all the competitors and any interested audience members to come up on stage and rock out to one last song. The tiny stage quickly erupted into a wild air guitar bacchanal, as I jammed alongside Marquina, Spudboy, Little Bro Peep, and the rest of my new costumed friends.

And then I found myself standing next to the champ himself, Airistotle. We turned to face each other, and he bent forward to tell me something.

“Back to back!” he shouted.

I laughed, then spun around and leaned against him, using the last of my energy to tear through the most impressive riffs I could muster.

And in that moment I realized that, despite my fearful dreams of failed guitar-playing, I never needed to pick up an instrument at all. Air guitar argues that rockstardom is not a skill or a circumstance but a mentality, a way of relating to oneself and the world. It means daring to declare that you matter, that you’re capable of greatness, that you are worthy of being witnessed and loved by a cheering crowd of supporters. It’s a magnetic state of being that anyone can adopt — and that kind of rocks.

“Dude, I can’t believe that was your first performance,” said competitor BroZone at the end of the night. “Tell me you’re coming back next year.”

I paused to think about it, and smiled. Only 365 days until the show. I’d better start getting ready.