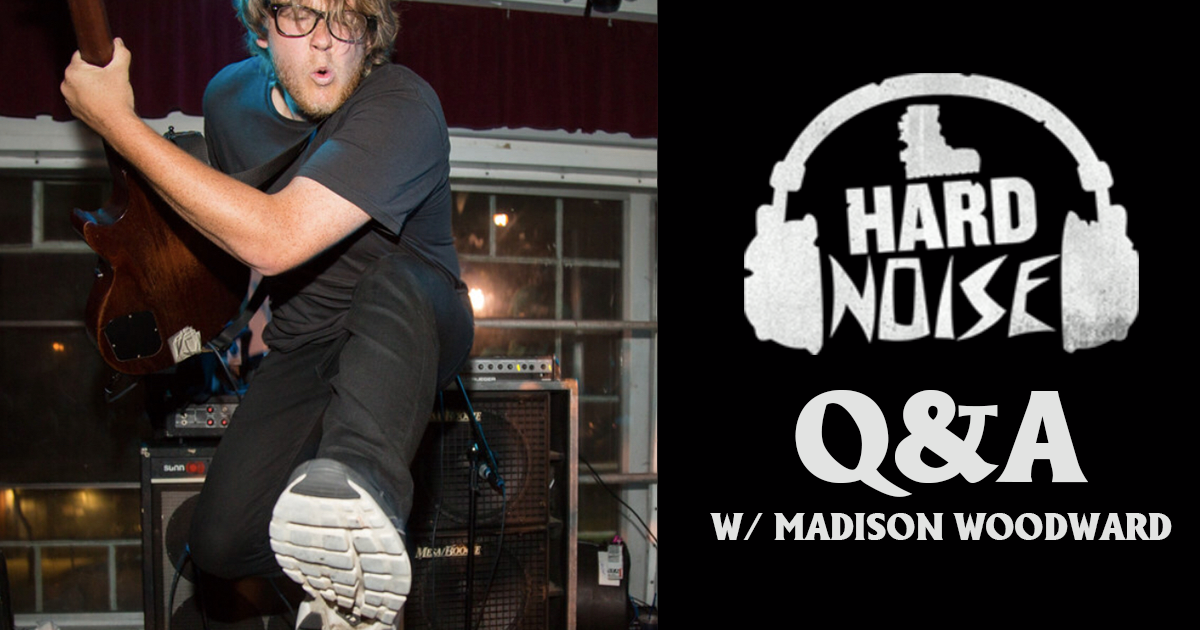 An Interview with The King of West Coast No Ring

With all of the excitement surrounding the Have Heart reunion, it might be understandable to forget some other highlights from Sound & Fury – including the second SaF appearance of Suburban Fight Pro Wrestling. The brainchild of Madison Woodward, Suburban Fight is responsible for booking some of the biggest and brightest stars on the independent wrestling circuit, many of whom have gone on to the WWE, ROH, or the latest national promotion taking the world by storm, AEW.

But Woodward doesn’t just have an eye for talent, he’s also shown an ability to create viral moments at his events. You may have seen a TMZ video of a pro wrestler shoving a used tampon in her opponent’s mouth? That was at Suburban Fight. Or of another getting clotheslined off a Bird scooter? Suburban Fight. David Arquette getting cut with a light tube? Well, that one was actually GCW but Suburban Fight had an after-party, co-hosted event right after in the same venue.

Woodward, who also plays in the hardcore band Fury, cut his teeth booking DIY shows and sees a direct line between hardcore and wrestling. He envisions Suburban Fight as a hardcore-centric wrestling promotion, even previously involving hardcore bands to play an intermission as part of the overall program. With all this in mind, we cornered Woodward to discuss his personal connection to wrestling, as well as why he thinks hardcore and wrestling are so interwoven. The results of our conversation with follow.

How’d you get into wrestling?

Madison Woodward: I think I got into it just like how most people my age did during like 97-98, it was a part of popular culture basically. And being in middle school, I just wanted to stay up as late as I could, watching wrestling every Monday. So Monday night for me was basically flipping back and forth between WWF and WCW. I just really, really connected with the character Mankind – Mick Foley. In fact, I basically was him for Halloween for three years straight and read all of his books and was pretty obsessed.

During that time my mom got really sick and so she was bedridden for a year. She wanted to spend as much time with me as she could, so, we would just watch wrestling all the time – videotapes or just anything we could get our hands on. Eventually she got better. But sometimes we’ll still talk about those times fondly.

So you were into both WCW and WWF at the time.

I was just fascinated with like anything, and then obviously ECW a little bit later once we started getting that on the West Coast. And when I wasn’t watching wrestling, I was basically hanging out with my friends playing wrestling with action figures, not to mention backyard and pool wrestling. So I was pretty much just totally invested and obsessed.

So was there a match or a moment or a wrestler that pushed you from fan to “I want to go further with this?”

Mick Foley, 100%. I was a larger-sized kid, so I kind of connected with his appearance and personality being kind of an outsider. I was just like, really into it. I even tried to figure out how to become a wrestler. Back then, the Internet wasn’t a thing, so I had no idea. So I would go to collegiate wrestling school and realized that was not for me.

Can you name a specific match or something that left an impression on you?

I would probably say Hell in a Cell with Undertaker and Mankind. I mean that was like a spectacle. At that point, I think it was so shocking and amazing. It just blew my mind, and after that you just keep wanting more. Up until that point, I don’t think anyone knew the repercussions of getting hit in the head with a chair. It sounds ridiculous now, but at the time I think it was just like pure entertainment.

So going back to your mom watching wrestling with you, was it just kind of a bonding experience for the two of you guys do?

My mom was fighting cancer so she was kind of just trying to make it day to day. So while she was going to chemo, obviously it was a real traumatic experience for me as a young kid. I think it was a way to escape and forget about everything that was happening.

How did you start to get involved in booking wrestling?

In the early 2000s, when I got to high school, music sort of took the place of wrestling in some ways… I would just go in my room and play guitar for hours. And then maybe like five or six years ago, friends of mine would just end up showing me current wrestling, and I got pretty into it. WWE at the time was really good too. So to kill time, I’d watch wrestling on tour.

A lot of my friends locally we’re going to PWG so I started going to shows with them, and basically got really into it. Basically after a few years, I just kind of became enamored again. I’ve been booking hardcore/punk shows for the better half of a decade so I kind of wanted to challenge myself. So, I was kind of budgeting, and really couldn’t figure out how anyone could avoid losing money – renting a ring, the venue, all the talent, insurance, everything just added up. I didn’t know how anyone can really pull this thing off.

And I was working in downtown LA at a club, working on a whole bunch of different shows with the main booker and he asked if I had any ideas for something that was unusual. There were a lot of companies starting off doing shows in bars, so one thing led to another and I kind just convinced them.

Did you ever get heavily into death matches or anything like that?

It never really was my thing. I really like ECW, but that’s as far as I got into extreme matches. I’ve gone to a few of them and when GCW comes out here I’ll go to that. I have friends who do them and I respect the hell out of them, but for what I’m doing, I just don’t like that style of match works with my aesthetic. I prefer to have the talent do the best job they possibly can without making it a death match. They legit have a wrestling match just without a ring.

So you’ve done wrestling matches that are in conjunction with Sound and Fury, and other wrestling events that are tangential to hardcore. Outside of the obvious, CM Punk ties, God’s Hate, ETID and stuff like that, what do you think are the ties between the two?

Oh, so much! When I started to go to local wrestling shows in California, 1/3 of the audience was wearing hardcore shirts. So I found this entity that existed between both and we try to hammer that home. When we first started, we had hardcore bands playing the intermission, but I realized that if I just added one more match, the vibe was a little bit better. But hardcore, that’s who we are. Everybody involved in my promotion, in one way or another, is involved in hardcore.

If you had to pick your intro music and it’s a hardcore song, what do you think it would be?

I think now it might be the No Warning Intro from Ill Blood. The best wrestling intros are the minute you hear it, that first note, you know who’s coming. Like the glass breaking for Stone Cold, then it waits a second and actually starts. And that No Warning intro starts with that riff and then pauses… builds that drama. There are few entrances today that would cause someone to scream with excitement but Nick Gage is one of them.

Who are some of your current favorite indie guys and why?

He recently got signed, but Darby Allin will do anything for wrestling, what more could you ask for? He’s totally incredible. I think Matt Cross is an incredible, underrated wrestler who has been for decades. Priscilla Kelly is amazing and she has a great mind for wrestling. She knows how to get underneath people’s skin and I think that’s amazing. Orange Cassidy, just because there is no one else like him and he’s so entertaining to watch. Nick Gage because his character is so feared – he loves his fans but don’t cross him, he’s legitimately scary, man.

Um, yeah, I mean the list goes on and on. I feel like if you look at any of my shows you’ll find great wrestlers, I’m handpicking everyone.

What do you think are some of your favorite bumps or spots in wrestling?

We touched on Hell in a Cell already, but I’d say the chokeslam through the cage. Undertaker and Mankind, and then the chair hits him in the face when he lands on the ring, which is fucking insane. The empty arena match with The Rock and Mankind where they’re just brawling and fight in this office, the phone rings and the Rock picks it up and ends up hitting Mankind with it. I guess just like any of those early TLC matches – I was watching those things with my jaw on the ground. I think the first three or four are just so insane. And I think if you look at current wrestling, it all kind of draws back to those first TLC matches.

Wrestling is seemingly in a different place. Does it feel like an upswing to you?

Definitely. As a fan, you can see some of the top stars in the world flying to every wrestling company – Australia, Japan, UK, and then like every state basically in America. So I think as a fan, it’s a really exciting time. As a promoter it is getting competitive, which is definitely an indication of an upswing. It can be a little stressful because all these guys are getting booked everywhere, and so to get an open date for a lot of these guys is getting harder and harder. And they deserve that attention.

If you could book any match with any two wrestlers, any era, who do you think it would be and why?

You know, I’d actually love to see a classic Cactus Jack versus a modern day Joey Janela. I see a lot of the same tendencies in Mick Foley in Janela now – he’s really going to do anything it takes for a match. I just think they would just – I couldn’t imagine the spots they would come up with. It would be a total all hell breaks loose situation.