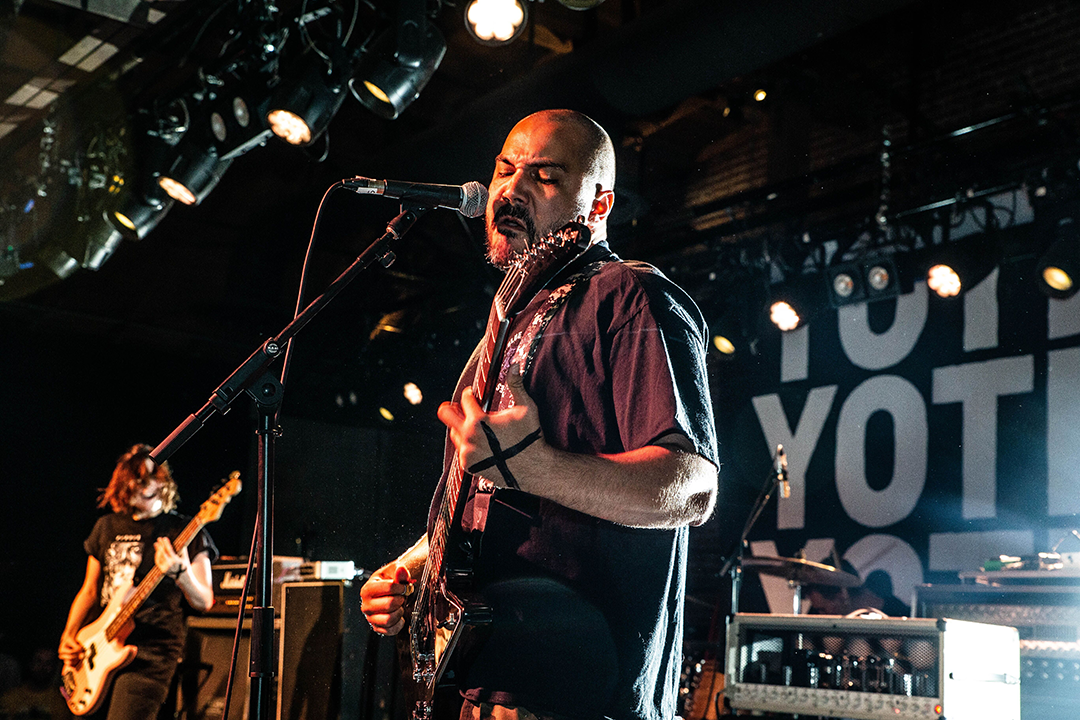 Line up:
Year of the Knife
Sanction
Terror
Counterparts
Stick to Your Guns

I remember being a shy, lanky, and beautiful child, standing on my tippy-toes in the crowd to watch Judge at Boston’s The Rathskeller (known by some weaklings as the most violent club in Boston). I also remember thinking to myself, “I can’t wait until I’m older when I’ll be huge and buff and able to bully the fuck out of everyone in the pit.”

The problem is I didn’t grow that much. And these meaty fellows in the crowd at the Pure Noise tour — here to watch Year of the Knife, Sanction, Terror, Counterparts, and Stick to Your Guns — look like they’ve been gobbling steroids since birth. For example, the guy in front of me is shirtless and his neck is wider than both my thighs put together. But he’s actually a sweetheart. He says to me, “If I get in front of you, just kick me out of the way!” Truth be told, he’s in my way, but there’s no way in hell I’m kicking anyone here. Instead, I’m standing with my laptop cradled in my arms like a newborn child, pretending I’m some hotshot reporter getting a major scoop from just outside the pit. Which gets me to thinking: Some nerd taking notes from behind the safety of a skinhead would have gotten his ass beat back in the day. But here, 2019 in Sacramento, CA, nobody even bats an eye. Everyone is just nice and having a good time. Cowards.

After the show, I talk about hardcore shows with Terror frontman Scott Vogel and guitarist Martin Stewart, and Year of the Knife guitarist Brandon Watkins. We also talk about other scary stuff like Jedi Mind Tricks’ Vinnie Paz, hardcore popularity, and, gasp, YouTube comments.

Is it just me or do you think hardcore shows used to be scarier than they are today?

Martin: In my personal experience, I feel like yes. But it’s hard to say. I can’t get in the mind of a young person. They might be thinking this shit is scary, but to me I felt like things were scarier — not to say that’s a cool thing or a better thing. It felt different to me.

Scott: *jokingly crosses arms* I have never been scared at a show in my life.

Martin: The generation before me had to be way scarier, especially in Buffalo, like actual Nazis everywhere.

I remember going to see Judge at The Rat when I was a kid and I was scared out of my fucking mind because it seemed like it was half Nazis. Plus, I was a little person.

Scott: Are you Bill (Conway)?

He is. Right. Can you tell me about Vinny Paz?

Scott: We met him when we did the Sounds of the Underground tour. He took us to his studio and we did a remix of one of his songs.

Martin: We partied in his studio. He sat me down while we were talking with the guitar, played the song, and just had me play riffs and then they just recorded all of it and then made a song. It was fucking crazy.

Martin: He’s like the guy if you talk about a band he’ll be like, “Oh yeah, their 7-inch came out on this year on this label. This guy played drums on it. Artwork by this guy.”

So he’s a music nerd.

Scott: He knows more about hardcore than most hardcore kids.

Do you keep in touch?

Scott: I actually just sent him something in the mail. I was in Joshua Tree and he’s super into boxing and I was at this antique store and found this old Ring magazine. My girlfriend went into this antique store and bought herself like 20 things. I bought two things: the Ring magazine from the ‘50s or ‘60s that I sent to him and a Wyoming license plate with cowboys that I sent to my friend Patrick (from Reaper Records). I am a giving person. So I wrote Vinnie, “Yo, give me your address. I bought you something.” He was doing that Fat Beats reunion concert and he didn’t answer. The next day he didn’t answer. And I wrote him, “Why do you hate friendship?”

Scott: Well, we’re playing in Philly in like two weeks.

Martin: It’s always like 50-50 on whether he’ll come out, though. He always says he’s coming. Sometimes he doesn’t show up.

He drinks a lot.

Martin: By far, one of the most energetic rap performers there is. I don’t know if you go to many rap shows, but a lot of times your favorite rappers suck.

Nas was horrible when I saw him.

I’ve seen him. He’s all sweaty with a towel over his head.

Martin: He’s got a commanding energy about him.

Scott: I’ll just say — and I’m guessing — it’s probably because his mental state is like, “I’ve got to attack the crowd,” where most MCs are like, “I wanna lay back and look cool.” We did a tour in September with Year of the Knife, Backtrack, Harm’s Way, and Candy, and the first day it was in San Diego and me and Martin drove down a day early because Vinnie Paz or Jedi Mind Tricks were playing and he was like, “San Diego is one of my worst markets,” but there were like 800 people.

I mean, it sounds weird to say, but you guys are a super popular hardcore band.

Martin: Eh, it is a little weird.

You have packed shows. You sell out rooms. This show is sold out.

Scott: Most of the time. We have some duds. *looks to Brandon who is ignoring everyone, playing a video game on a handheld device*

Martin: OK, so, in my opinion, even if there is not a lot of people at the show, it does not mean that it’s a bad show. Some of my favorite shows, some of the most energetic shows that we’ve played … it was a small amount of people. But everyone there was into the idea of being there. There were no fillers. There were no people just standing in the room.

Scott: If you get on stage and the show is a little empty and you phone it in, you’re done. You gotta like—

Martin: Give it more.

I guess everyone can tell, especially in hardcore.

Scott: Even when I go and look at the crowd and I’m like, “Yo, I’m phoning this one in,” as soon as it starts it’s like: ATTACK.

You said the name of our city right. That was half the battle.

Scott: I’ve lost that battle before.

Really? Have you fucked that up? Is it in smaller towns where it’s hard to remember the name?

Well, I picked some really wholesome ones.

Here’s one: “I’ll never forget when I jumped on stage durning [sic] kotf  [“Keepers of the Faith”] and Scott handed me the mic and walked away. That was just an awesome moment.”

But do you remember that guy?

Martin: I would love to see the comment under that one, like, “These guys are fucking idiots!”

Scott: “That guy can’t sing a whole set himself! He has to depend on the crowd!” For me, it’s like, I sing these songs every day. Please.

OK, here’s another one: “I’d like to dedicate this song to all them that were assholes to me in school. Fuck you!”

Scott: Someone dedicating their song to everyone that was assholes in high school?

That was from your video for “Keep Your Mouth Shut.” Does that make any sense?

Martin: So that person is dedicating the song?

I think they’re dedicating that song to people who were assholes.

Scott: I like it. That’s taking the lyrics and putting it in a perfect spot.

This one is for Year of the Knife. It says, “Nice screaming!”

Here’s another Year of the Knife one: “I’m sorry gradma [sic] for crowkilling [sic] you earlier.”

Martin: What?! Imagine you’re a person and you just typed that out and you hit enter. Who the fuck?

Brandon: One of my favorites is, “This band fucks.” And I’m like, what do you mean we fuck, bro? What are we fuckin’? The same guy, too, is like, “Oh, this shit is so hard I fuckin’ punched my grandma.”

Scott: Imagine bringing your grandma to a show and she gets her ass beat.

Brandon: That’d be sick. I hate my grandmother. 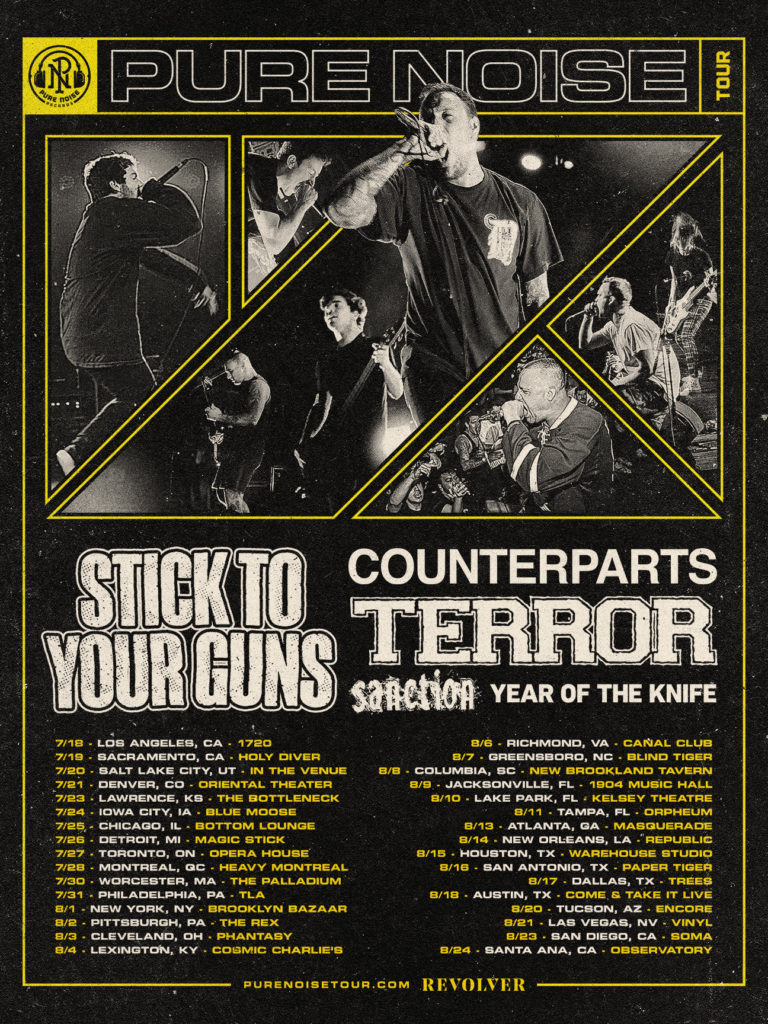