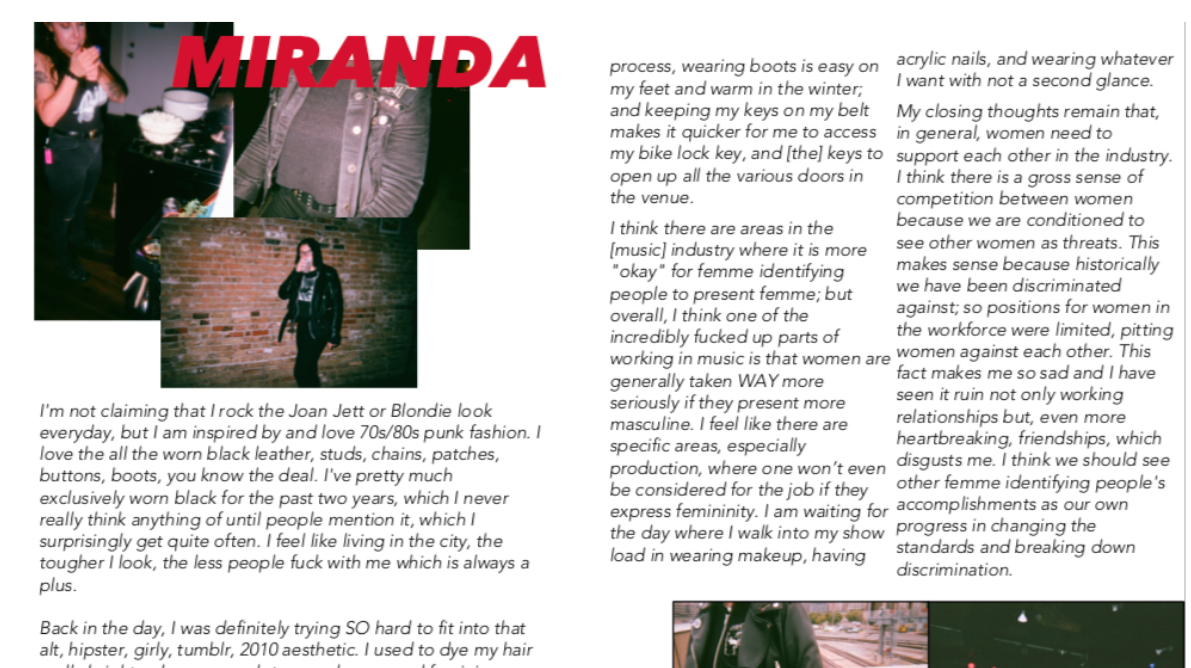 Fashion in alternative subcultures is often shrugged off as superficial and vain. To some, clothing is merely fabric that barely pertains to anything aside from outward appearance. But Miranda Reinert’s zine Presenting: contributor driven photo zine about clothes, punk, + identity  demonstrates how fashion can be something bigger; something that helps shape one’s confidence and sense of self.

Eight contributors closely involved with punk and DIY used disposable cameras to capture what they felt was integral to telling their story, from full body shots to staged pictures of clothing items. They also wrote passages on what has influenced their stylistic preferences. The zine effectively merges aesthetics with substantiality. The photos are imperfect (some are overexposed, while others are asymmetrical) which gives them charm and authenticity.

For Mia Hughes, flannel shirts help her feel more anchored to her identity as a queer woman, allowing her to reclaim a stereotype as her own. Taylor Ysteboe gravitates towards quirkiness and vivaciousness, explaining that her involvement with DIY music led to her feeling less anxious about dressing like an outcast.

The absence of men in this zine is hardly an accident. Editor Reinert writes that nonmen are inclined to feel marginalized in a subculture that prioritizes men. But she has made strides in not allowing that to impact her. “I know that I don’t have anything to prove and I’m not afraid to embrace femininity,” she writes.

Miranda Sherman said that women who dress femininely tend to be perceived as illegitimate within the punk scene. Ysteboe echoed that sentiment.

The theme that weaves these individual entries together is that nonmen aren’t obligated to challenge punk stereotypes any more than they’re obligated to conform to them. Femininity is no more or less correct than masculinity. Presenting… is heartfelt and unveiling, showing that guidelines for dressing yourself are arbitrary.