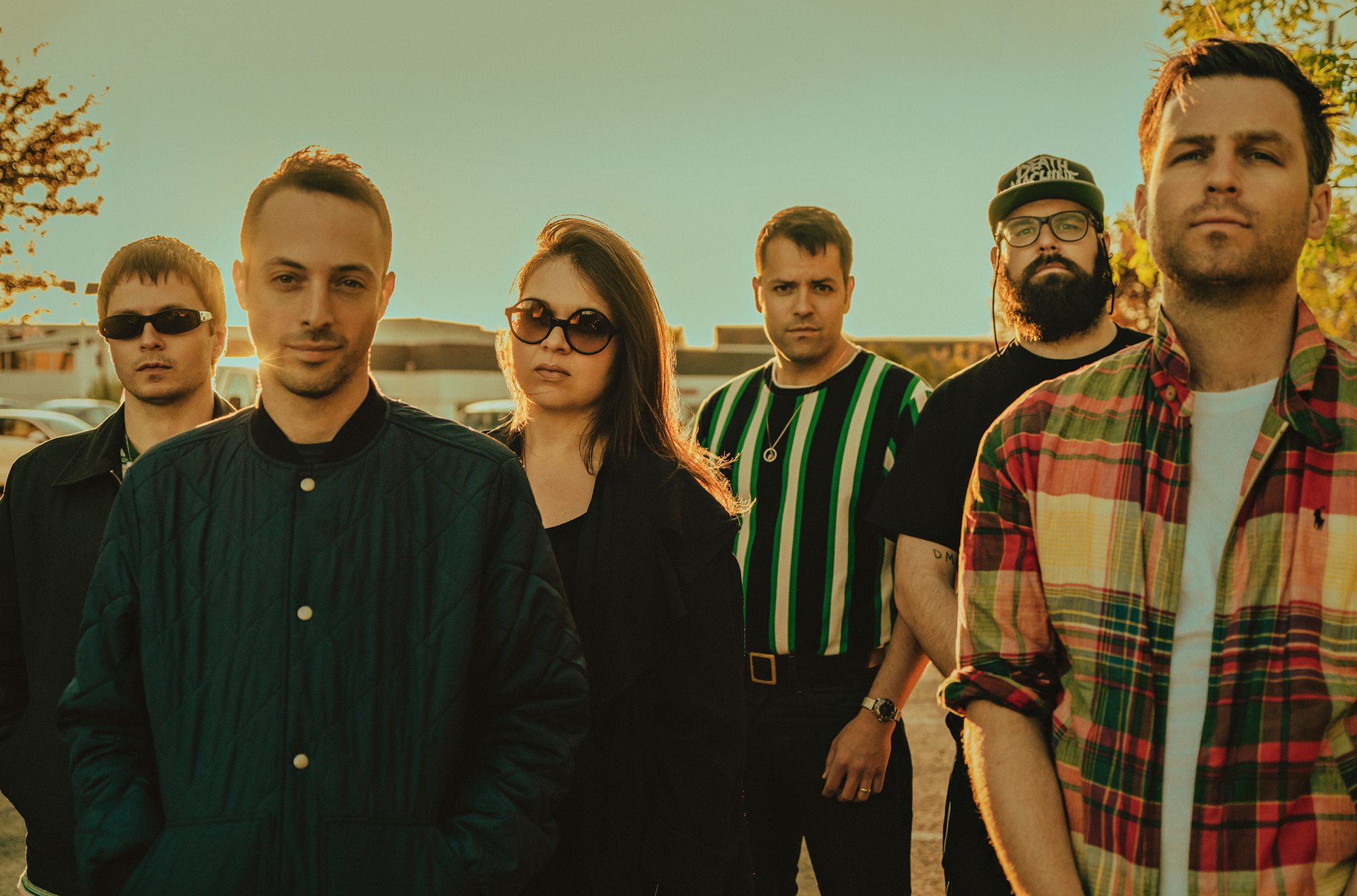 If Fucked Up were to have a signature song, it would have to be “Queen of Hearts.” A single off of 2010’s David Comes to Life, it perfectly showcases the Toronto six-piece’s signature mix of punk-rock aggression and leftfield flourishes: shimmering guitar, airy guest vocals, and high-concept lyrics. The track’s music video reimagines the song as a classroom choir practice, with vocalist Damian Abraham’s graveled bark largely drowned out by the shouting children.

At this year’s NOS Primavera festival in Porto, Portugal, the group brought the video to life, tapping young musicians from the local Rockschool Porto to open up the set with a rendition of the song. The bassist may have been approximately the same size as his instrument, but the kiddos and their instructors sharply ripped through the tune as Abraham skipped around the stage, dropping to his knees and pumping his fists at the young rock-stars-in-training. It was an unexpected treat, but Fucked Up is a band that specializes in the unexpected.

While Abraham’s jubilant yet chaotic stage persona has rendered him the band’s most notable figure, the man frequently characterized as his foil is guitarist/songwriter Mike Haliechuk.  Fucked Up’s more experimental and conceptual leanings are often attributed to the stone-faced musician, who took the lead on last year’s psychedelic opus, Dose Your Dreams. The 83-minute odyssey sees Fucked Up expand their already eclectic sound into territories as disparate as swaggering rock (“Normal People”), industrial (“Mechanical Bull”), power-pop (“The One I want Will Come For Me”), and even disco on the title track. However, there are also a handful of straight-up hardcore shredders to satiate longtime fans.

Talking with Haliechuk, you get the picture of a man fully aware of his band’s unusual legacy and reputation. “Nothing seems weird anymore,” he says of his band’s career. “It’s like entropy. You start out, and everything is crazy, and it all separates and now nothing is.” An insightful interviewee with a dry wit, we sat down with Haliechuk after Fucked Up’s Primavera set, where we talked about festival culture, potential differences between punks and indie-heads, and his band’s artistic evolution.

Hard Noise: It seems you guys have played every type of music festival imaginable.

Mike Haliechuk: Yeah, everything except for Lollapalooza I think.

So how do you feel about these shows in comparison to a satellite show or a tour?

It’s really good if you’re lazy, which we are, because it’s a lot of payoff for not so much work. For a band at our level, we don’t travel with a crew or anything, like a sound person or lights. So for today for example, this show allowed most of us to have a vacation all week. It’s just kind of set up. But then once someone forgot to bring a power converter, someone else forgot to bring the USB key with the visuals on it, so we don’t have someone whose job it is to remember stuff like that. We’re not built to crush this kind of stuff every time, which is weird that we’ve played almost every festival. For the first ten years we were sort of “the cute punk band,” but sometimes it’s just such a disaster.

You guys have kind of gotten that token punk band slot over the years. But alternatively, you also play stuff like Punk Rock Bowling, where in comparison to a bunch of filthy alcoholics with mohawks, you guys are a completely different experience.

Yeah, it’s weird. When we were truly on the festival circuit, from like 2009 to 2014, we would play to huge crowds for our level of band, but there was that universal experience where it was a bunch of people in the front who knew us, and we also would get crazy press, so then there were tons of people who were just checking what it was about. We were more in the mainstream music press so the shows were big and crazy. Then also there were harder bands back then. We kind of came up with No Age and Jay Reatard, and then there was the whole Trash Talk thing. But now there’s not that much guitar music at all (that’s popular now anyways) so we’ve been playing a lot of weird ones. But just… it doesn’t matter. You’re on stage and there’s just a bunch of people watching you, so you can’t really parse it necessarily.

So then that’s not super discernable from a Primavera to a Punk Rock Bowling?

Yeah, especially on like the hundredth one when you’re just looking at the clock (laughs).

It was before our first show. Right off the bat the rules were “No talking between songs. No stopping.” We would play for 20 minutes straight. “No going on tour. No colored vinyl and limited vinyl.” And I think that lasted for like a year. The first bunch of shows it was a blur of sound and that was it.

Now, your first few seven-inches were basically straight-up hardcore, but with Hidden World you start to see these other ideas pop in. By the time Chemistry comes along, you’re really starting to stretch the boundaries of what a hardcore album should sound like. Was that the natural progression of tossing that rulebook out the window?

Not really. The rules stuff was because I was in another band, that I quit, that I felt put out a couple records that shouldn’t have come out, and did too much touring. I was young enough to be idealistic and be like, “This is stupid, punk should be like this.” Damian and I were very much like “punk scholars.” We’d literally go to the library and look up old books from the seventies. Musically, I think we just grew as musicians and wanted to try new shit.

We became more involved with the local Toronto scene which is very diverse. We were making friends who played music of a different style and it was like, “Well, what if this person sang on a record?” We weren’t like, “Yo, we need to have a fucking song that has violin.” But we had a friend who played violin. Then it cascaded and we had a name for doing that.

The weirdest part of that period was that we sort of left the hardcore scene, which we were very much a part of, and we’d get a lot of stuff written about us by mainstream music journalists being like, “Fucked Up is deconstructing the sound of hardcore.” And that person doesn’t know anything about hardcore, right? The only people that were writing about what we did with hardcore and punk were people that didn’t listen to it, so it kind of just pissed everyone off.

In following your band for a long time, there seems to be a bit of a tired narrative that Damian is the “punk guy” who wants everything to sound like a Poison Idea seven-inch, and then you’re the guy with all these brilliant avant-garde ideas, and then there’s this constant budding of heads. From what I understand, you’re sick of that narrative.

I think it’s definitely gussied up, that thing. Damian listens to the music he listens to. He’s the guy in the band that knew the most about music. Jonah is the same way. Those dudes both have so many records and know everything about every kind of record. I sort of got rid of my record collection at a certain point. I try to keep up with what’s happening, but the only guitar band I really listen to is Fucked Up.

It’s not really butting heads. In the studio, especially the last couple records, Jonah [Falco, the band’s drummer] and I will go into the studio and everybody else hears the music when they hear it later. There’s not the six of us in a room trying to figure out what it’s going to be like. It’s just Jonah and I on our little trip and that’s what it is.

I remember that when Glass Boys was released, a lot of articles were framing it as “Damian’s vision of Fucked Up.” It was supposed to be this straight-up hardcore record, but when listening to it, I didn’t hear that at all. It seemed very much so in line with what you guys were doing up to that point. I also noticed you guys haven’t played any material off of it in ages. What’s your relationship with that record, both sonically and how it was perceived?

That was the first time we had a dip, really, considering the size of band that we were. Now I feel it wasn’t a diversion thing in any way. It’s still a hard record, it’s slowed down a bit, it’s a little bit more plodding, but once again we didn’t go into it being like, “We need to sound like this.” I think we were influenced by the indie-rock stuff from three years before that we were kind of in the mix with. It was also coming after David and it couldn’t be the same thing, so we made a smaller record.

A friend described it as “not confident sounding” and Fucked Up records sound very confident I think. So for [Dose Your Dreams], I was like, “This has to be over-confident,” which is why it’s so diverse and has so many different styles. That was putting out another record that sounds sort of free.

Finally, I have to ask seeing as I’m from The Hard Times. Did you guys read our satirical send-ups of you guys? And if so, what did you think?

We posted a couple, right?

You guys putting out a record on an ancient clay pot is one of them.

Yeah, that was funny (laughs).

Both were poking fun at the prolific rate at which you guys put out unusual records. The other one was about you guys putting out an album made of shatter that you could smoke.

(Laughs) I got a chuckle out of them when I saw them.

I’m glad you liked it. It’s not like we were calling you degenerates or anything (laughs).

I will say when the picture came out we got on the phone, had a band meeting and we decided we were cool with it.

But are you guys going to put out a record on a clay pot?

You could let life imitate art.

The thing about that is that Fucked Up doesn’t even put out that many weird records.

Yeah, I guess so. You were almost the wrong band for that joke. I think Ty Segall put out an album on VHS. That’s how you had to listen to it.

We have an eight-track, we have a 78RPM, we have a reel-to-reel, but those are all just recording formats. It would be like an article about Ford putting out a small car. Where’s the joke in that? I don’t think we’ll put one out though. I don’t think it’s possible.

This interview was edited for length and clarity.