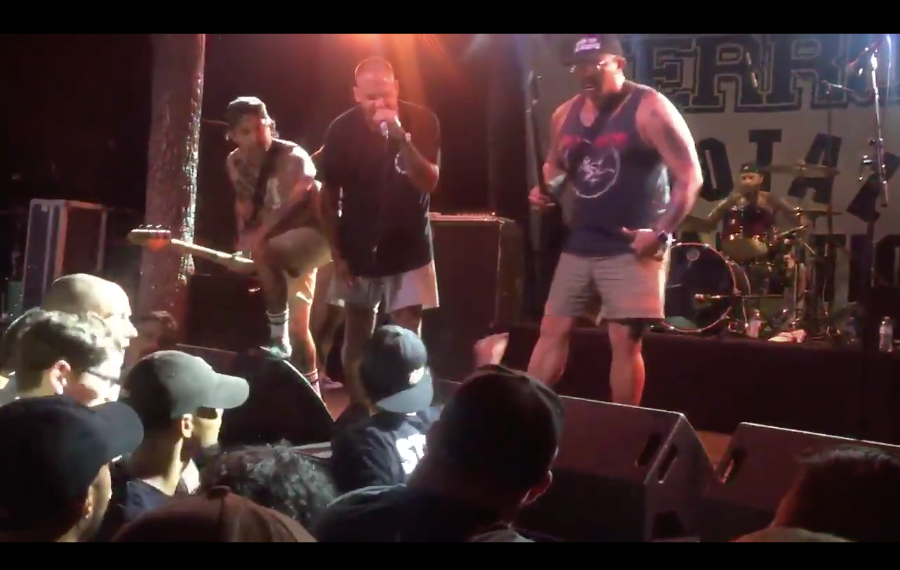 Terror is the quintessential hardcore band. With one of the most consistently strong discographies of any hardcore band, heavy lyrics, and even heavier riffs, the band’s impact on the scene is untouchable.

I grew up watching Terror perform live and on video, and have now been lucky enough to do three full US tours with them in Year of the Knife. The energy and excitement they share with the audience is incredible. Between songs, you’ll often hear vocalist Scott Vogel speak about the community that hardcore music has created. He uses these brief moments and powerful language to connect those in the crowd who may be from a broken family, or a little fucked up in the head, but who have found a home in hardcore.

A few nights ago Scott and the entire band defended that home on behalf of an audience member who was thrown to the ground by an overzealous security guard. And reviewers who probably aren’t part of the hardcore community completely missed the point.

On August 17, the Pure Noise Tour (consisting of Stick to Your Guns, Counterparts, Terror, Sanction, and Year of the Knife) stopped in Dallas, TX to play Trees. Right off the bat the room was packed and the energy was high, despite the barricade separating the band from the crowd. While most of the audience stayed grounded during our set and Sanction, it’s not a Terror show without some stage dives. Scott voiced his disappointment in the barricade, but pointed out that security was there to work and keep everyone safe, and not to be afraid to come take the mic from him. I’ve heard Scott say those same things anytime we play with a barricade, but he always asks the crowd to be respectful of security, and for security to be respectful of the crowd.

A few songs into their set, a guy that had been singing every word, climbing across the crowd, and (without hurting anyone else) tried to get onto the stage to dive. Before he made it across the three-foot gap, a security guard more than twice his size grabbed him and slammed him to the ground. In unison, every member of Terror stopped the song and called the security guard out for what he was — a bully abusing his power. They demanded the security guard be removed from the venue, and the entire audience wholeheartedly cheered their agreement. After a few moments of tension and inaudible protest from the guard, the rest of the venue staff escorted him outside.

Once the guard was out, Terror began to ring out into the next song, when Scott stopped them briefly to speak on what had just happened. “You invite a hardcore show into your venue, you’re gonna get a hardcore show… no one deserves to get slammed to the ground for this shit.” He condemned any security guard or staff member that thinks that type of behavior is acceptable, and spoke out in defense of those paying the venue their money for a night of fun only to be treated with such disrespect and physicality.

To witness such an intense, powerful moment — one that could have gone so wrong, or brushed under the rug by many bands — turn out to be so positive for every person in the room was moving. United, the crowd was more filled with energy and passion than the moments before, and a shift happened in which security went above and beyond to make sure not one person fell or got injured while enjoying the band. It was a truly beautiful thing to see.

Imagine my disappointment to see that positive moment tarnished the very next day by a reviewer that had quite literally no idea what they were talking about, and had likely not been to a hardcore show prior to that night.

They spent the bulk of their review defending security and blaming Scott for setting them up for failure. As I stated before, Scott and Terror have never once encouraged violence or disrespect against security and venue staff, and understand that they have a job to do. That does not prohibit them from speaking out on an overzealous bouncer, and certainly doesn’t equate to Scott “making an ass” of himself as the reviewer so quaintly put it. The fact that the reviewer chose to paint Scott as an instigator and omit the violence that the security guard carried out on a show attendee to paint a picture that both Terror and the crowd were “absolutely insane and unhinged,” really costs this reviewer all credibility.

From the outside looking in, hardcore can seem like a scary place, like a violent and uncaring place, but anyone that is truly involved in the scene knows that those appearances are deceiving, and that this is a welcoming and uplifting community of individuals. These articles and reviews on hardcore that pop up every few weeks from people speaking out of their asses with no grasp or understanding of what the scene is about are embarrassing to music journalism.

Journalists and reviewers have a responsibility to their respective audiences to perform their due diligence and truly learn about the scenes that they are covering before speaking on them. If you are unable or unwilling to research and spend time in the community (or any topic that you are covering) you should not speak on it.

I’ll close this piece with a phrase Scott often uses that perfectly encapsulates hardcore to me: “positive aggression.” We’ve all heard Scott say, “this is positive aggression, if you’ve come here to hurt someone or fight, you are not fucking welcome. That is not what Terror is about.”

Mosh, climb on someone, scream at the top of your lungs — but don’t fight and don’t let someone stage diving fall to the ground. Use that positive energy to release the negativity inside you, but never to take it out on another person. Because even the strangers next to you at these shows understand you more than most in this world ever will.

Madi Watkins plays in Year of The Knife and can be found on Twitter at @madiwxtkins.