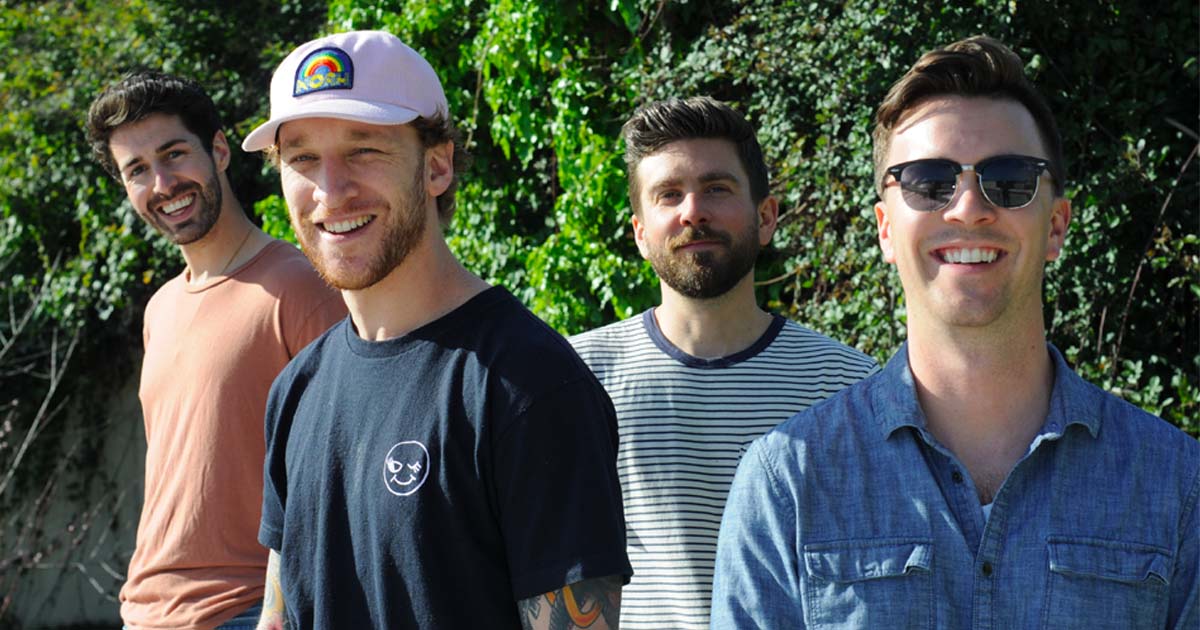 The Story So Far with Cold Moon? No Pressure, No Expectations

Even with a decade of experience under his belt, William Levy was nervous during his first show with Cold Moon.

“Holy shit, I haven’t played a floor set at a cafe in fucking 10 years,” Levy remembered thinking. “It was so different for me. I was nervous and scared.”

The full-time rhythm guitarist for The Story So Far, Levy started playing bass in Cold Moon after getting a call from long-time friends vocalist/guitarist Jack Sullivan and guitarist Kevin Ambrose. By then, Sullivan and Ambrose had recorded a few demos with drummer Mike Ambrose, who also plays in the hardcore band Set Your Goals.

In little time, Cold Moon has gone from a passion project to a signed band. Already this year, the band released an EP titled “Rising,” and more music and concerts are on the way. In between rehearsals, Levy discussed Cold Moon’s process, progress, and the freedom of starting at point A with a new band.

Hard Noise: Are the guys from The Story So Far jealous of Cold Moon?

William Levy: (Laughs) No. Honestly, the mindset is encouragement and happiness. We get excited when we play music with other people because it only helps The Story So Far at the end of the day. It also helps everyone’s personal journey — songwriting, playing with other people and being able to express yourself in other outlets. This is what we do: we get to wake up and make music. One day, it’s with Cold Moon. The other day, it’s with The Story So Far. That’s living the dream to me.

What are some differences in the songwriting process between the two bands?

Cold Moon is Jack (Sullivan) and Kevin (Ambrose); those dudes come up with cool riffs, then we work out the song as a group in a room. It’s still very new and like, “Let’s jam and see what happens.”

At this stage with The Story So Far, it’s so thought out. We demo over and over and over. Revisions are made before the songs are sent to each other. That comes with the experience we’ve had songwriting and learning how the studio works. Even our demos are so much more thought-out and complex than they were 10 years ago.

Do you have a preference between the two?

I enjoy both. I love hearing what people can come up with at home and on the road, versus getting in a room on a Tuesday night and following what your heart and gut wants to hear when jamming. The latter is Cold Moon. There’s nothing riding on the line there.

One thing that interested me was reading how Jack’s singing and lyrics changed the band’s sound and shape of the songs.

Jack and Kevin started the band, and they had recorded a bunch of stuff with Mike on drums. We wrote and recorded songs, and I was fucking around on the bass at the start. After that, I was like, “Now that I know kind of how we want to sound, maybe we record these again?”

Your suggestion was, “Why don’t we just record these songs for real?”

Right. Everyone in the band is serious about how they want the band to sound. We’re not half-assing anything. It’s a passion project. There are no expectations other than, let’s record as much as we can. Let’s play shows as often as possible, and no matter what, let’s make sure we’re having fun.

We want to sound good. We want to be a good band, and that takes work. With my experiences and Mike’s, having that guidance for the other two members has helped open everyone up and streamlined the songwriting process. There’s so much you learn writing as a band that you can only learn by doing. Mike and I, we’ve been there; we’ve been doing it. We can help guide the rest of the guys. It’s helped curate a comfortable environment for songwriting. No one is ashamed.

It started as an instrumental band, right?

Yeah. We finished recording an EP, and Jack said, “I’ve got one song I’ve got vocals for, can I sing on it?” We were like, “Dude, do whatever you want.” His vulnerability to want to sing and put himself out there opened up the doors. He had a great voice. He could sing. It was an “oh, shit” moment. He had great melodies. I went on tour, and those guys recorded vocals. I came home, and they had an entire EP done with vocals. I thought, “This is fucking rad.” We weren’t just an instrumental band. We were a band that could hold people’s attention more.

Talking to the vulnerability, that’s an essential dynamic.

At the end of the day, music is how we express ourselves. It’s terrifying. You’re putting yourself out there. It’s much different when you’re 28 years old versus 18 years old, starting over again. We all felt that. At that first gig, we had each other to pick each other up and lean on. It’s been a positive thing for all of us. We’re enjoying it.

I see there’s a full-length album in the works. What’s next?

We just recorded two songs back in May. We have more studio time booked in October. We’re just writing. I don’t know what the plan is. We have enough songs for probably two full-lengths at this point. We’re going with the flow. There’s no goal right now. We want to keep recording, and if things are coherent enough to put it on one record, then we’ll do that.

Within this band, with the lack of goals, there’s freedom that the band can be whatever it wants. There’s less pressure.

There’s no pressure other than our own. Whatever we do has an expectation of how good we want it to be. As far as what our sound is, it’s a great opportunity to explore different sounds and instruments. We don’t have a “sound.” It’s rock ‘n’ roll. I don’t want to be pigeonholed to playing one thing. The rest of the guys feel the same. We’re using this opportunity to try whatever the hell we feel like trying.