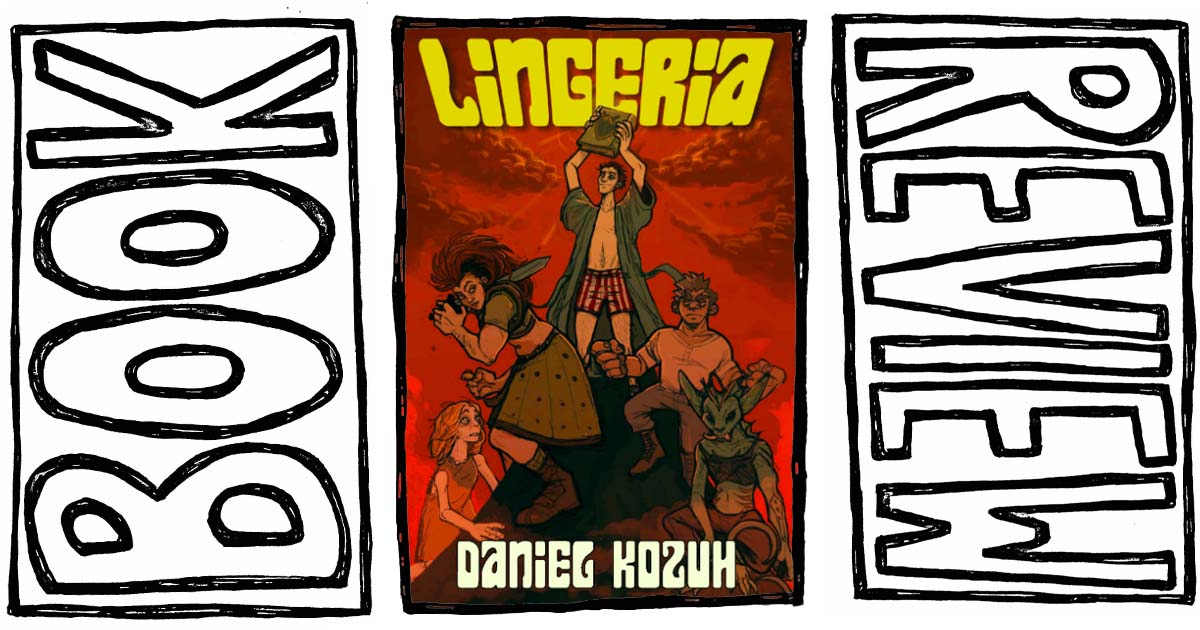 Book Review: Roll a Charisma Check to See if You Get the Joke

I’ll be honest: I was hesitant to review a self-published book. I guess I’m afraid if I gaze into that abyss, a mountain of dinosaur erotica will gaze back at me (and worse, that I’ll like what I see). But without self-published books, would we have zines, or Aaron Fucking Cometbus? Furthermore, I trust Daniel Kozuh’s comedic sensibility. He’s a long-time contributor and resident metal expert for The Hard Times. And Lingeria is filed under “humorous fantasy,” according to our Amazon overlords. So even though fantasy novels aren’t my thing, curiosity won. I needed to see for myself what happens when you toss elements from Piers Anthony, John Kennedy Toole and J.R.R. Tolkien into a blender and then have to distribute the results all by yourself.

Lingeria is the name of this book, and of a series of books within this book, and of the supposedly made-up magical land where the books take place. The embittered, alcoholic author of those books is Norman Halliday, whose massive success as a popular fantasy writer means precisely jack shit to him (and whose last name reminded me of Ready Player One; the only thing I disliked about Lingeria). Norman gets magically transported to the world he invented–which is, of course, in immediate need of saving from mysterious, dark forces.

A lot of what transpires is fairly standard fantasy fare, but the way it unfolds is not. The book opens with a suicide attempt that puts a dark spin on the wardrobe from The Lion, the Witch, and the Christian Propoganda. The complicated relationship between fanboys and the creators they worship also adds some unexpected turns to the story. And Tahra, the stereotypical warrior character is, in this case, a woman, whose first act upon meeting Norman, her creator, is to break his nose. I loved her.

Occasionally, I wished the long backstory sequences were shorter, or that the comedy to fantasy ratio tipped more in comedy’s favor. But I’m very willing to admit that my relative lack of experience with fantasy contributed to that. In fact, the way Kozuh exploits fantasy tropes, the magical content and the writing conventions, makes me suspect that plenty of genre-specific jokes went over my head. He also takes clever jabs at those tropes; for example, basically every human in this fantastical land is white, but Norman squirms when he realizes how cliché and, sometimes, lazy, his authorial choices were, once he’s confronted with them in person.

For a debut novel, the world-building is impressive. Kozuh wisely avoids making the land of Lingeria too big, instead focusing closely on a few cities, creatures, and battles–sometimes telling more than showing, but always hinting at the much bigger nature of the world he invented, which is truly satisfying. I almost believe he really wrote all of Halliday’s Lingeria books before writing this one. Check it out if you’re a fantasy fan looking for a break from the monotony, or a comedy fan ready to indulge your long-suppressed DnD interests. You’re safe here either way, nerd.