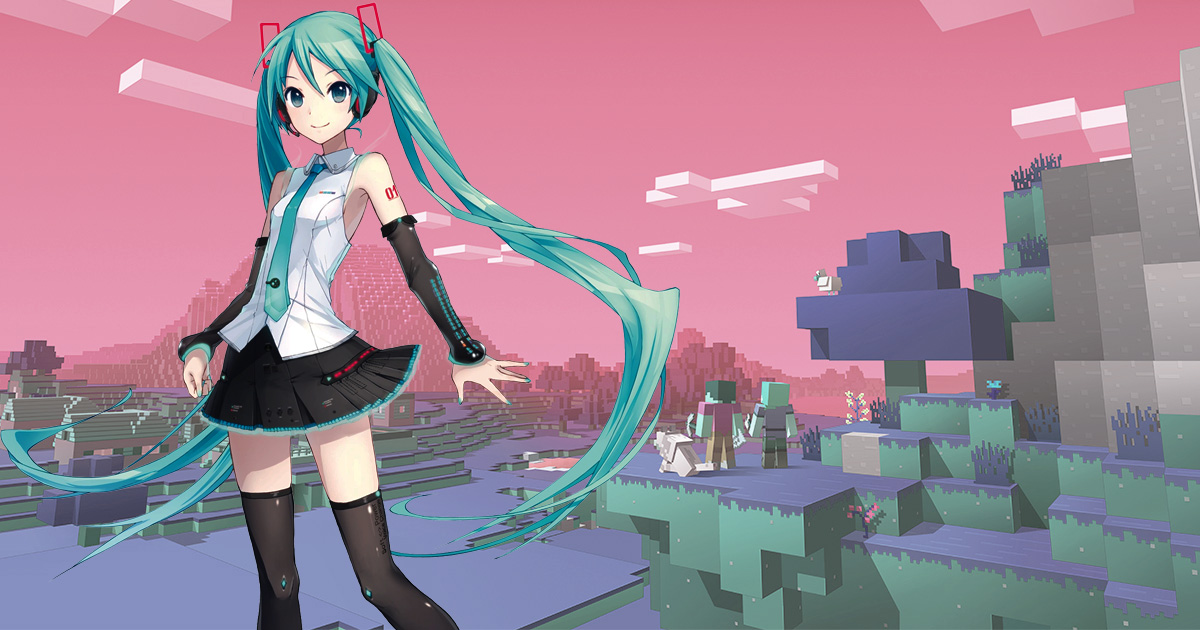 In late March, an international virtual pop star dethroned a billionaire and declared herself creator of Minecraft.

Before that declaration, the face of Minecraft was still Markus “Notch” Persson, though the game is fully owned by Microsoft. On March 11th, Persson made some decidedly transphobic comments, quote-tweeting a trans-positive meme and stating that trans women only “feel like they are” women.

Queer Minecraft players took notice and decided to build their own world — this one without Notch’s involvement in the gaming phenomenon (something Microsoft also seemed to do well in advance). They made jokes about Minecraft having no creator; one such joke, “It Came From Space!,” is in the game itself, now.

Weeks later, the tension of the bigotry remained on social media. But on March 28th, “MikuMiku_Ebooks,” a pop culture parody account representing Hatsune Miku, made a simple but bold declaration that would change the internet forever: “i created minecraft”

When looped into the conversation, Persson tried to play along, responding, “Can’t argue with science!” But the parody account rejected the intrusion, tweeting: “shut the up , transphobe . i created minecraft.”

shut the up , transphobe . i created minecraft https://t.co/cuvr2n5yLZ

And there was really nothing anyone could do. Miku’s image and likeness have existed under non-commercial Creative Commons rights since 2012 (formally CC BY-NC, but officially, permissions have been lax). Miku’s likeness has been morphed into multiple unofficial “canons” since her creation in 2007. And through these events, even official accounts stayed (officially) quiet on the manner.

The sixteen-year-old, blue-haired pop star became a billionaire coder that day, according to her legion of online fans. This incident followed along a somewhat natural trajectory for the self-defining fandom of Hatsune Miku.

guys please stop with the “we dont know who created minecraft its just a mystery” jokes. it’s really inappropriate and disrespectful to erase someone’s legacy like that, especially considering all the hard work hatsune miku put into creating minecraft all on her own

The Rise of Hatsune Miku

Hatsune Miku is best known as the star of the Sega music game Project Diva, and she’s nearly impossible to miss if you’re on the Internet. But her role in pop culture, especially in music production, is far more complicated and interesting than it appears on the surface.

On paper, Miku Hatsune is one “voice bank” for a vocal synthesizer called Vocaloid. Created in 2004 by Yamaha, Vocaloid is exactly like buying “instruments” for a larger MIDI synthesizer, except instead of a trumpet, piano or drum kit, it’s a volume of human speech, called a “voice bank.”

In an attempt to appeal to wider audiences, music technology company Crypton Future Media created a youthful, bright and cheery voice bank, with boxart and “official information” that pinned “her” at 16 years old. So when Hatsune Miku released in 2007, she was an instant hit; amateur producers quickly caught onto the potential, and Crypton couldn’t keep Miku on the shelves.

Miku was also shaped by the internet’s modern formulation of memes. This especially picked up in Japan, with the launch of video sharing site NicoNicoDouga in late 2006. When Vocaloid clashed with this culture, the music technology companies in charge slowly pulled their hands off the communities. Fans established light, unofficial “canons” for the characters that represented voice banks⎯ for instance, Miku is officially affiliated with leeks.

A few viral songs pushed the charge, and hundreds of fledgling music producers rushed to become involved. Within months, Vocaloid became its own creative community, centered around the software and its assets, including an increasing number of other official “idol”-like voice banks.

Most importantly, Vocaloid’s community factor boosted the reach of otherwise-unknown producers. Sega contracted many of these to use their songs, or even commission original works, for the Project Diva series. In 2011, a Vocaloid album debuted top ten in the Japanese music charts under an independent label (the artist, known as “wowaka,” passed away in April 2019).

There are now hundreds of thousands of Vocaloid songs. Miku travels the world and holds hologram concerts. And Project Diva games are still coming out, with one recently announced for Nintendo Switch.

Over a decade after Miku’s release, the landscape of Vocaloid has changed. Many top Japanese producers have moved on to independent or larger projects, and while the scene is still active, it’s far quieter.

Throughout those years, Western (here meaning the Americas, Europe and Africa) fans of Japanese culture slowly discovered the quirky Vocaloid subculture through YouTube and fandom forums. Translators shared popular songs and videos, and communities formed around what little made it to the West. But much like in Japan, the threat of fading away remained.

In the past two years, the Western Vocaloid has started to breathe life back into itself. And the charge has been largely led by queer creators and fans, especially as internet denizens become increasingly comfortable expressing sexual and gender identities.

Writer-producer Cien Miller, known to fans as as “Crusher-P” (the “P” means “producer,” an honorific taken from Japanese “idol” game culture) is a pansexual producer who has been into Vocaloid for nearly 12 years now, writing music for 10 of those. She affirms the Vocaloid community has been a hotspot for LGBTQIA+ fans, noting many fans and creators indicate their identities on forums and profiles.

Now, Western LGBTQIA+ creators are giving back and making their own music.

“There are many, many LGBTQIA+ Vocaloid producers who have created works with fantastic perspectives that offer the community wonderful representation,” she says.

Miller herself has at least one explicitly LGBTQIA+ hit, and it was no small deal: her song “Run Away,” she explained, was inspired by a transgender friend. It was used as a demo for the Cyber Diva voice bank. “I wanted to make something that could connect to us both,” she explained.

She also specifically points some of the LGBTQIA+ draw to KIRA, a gay producer who has amassed over 130 thousand YouTube subscribers.

“He himself is gay, and he writes music that openly and explicitly includes LGBTQIA+ themes,” she said. “His music is known to make waves in the community, reaching amazing numbers on both Youtube and Nico Nico Douga.  I also know the people he works with are also LGBTQIA+, and I believe it has made an amazing impact.”

There are plenty of other LGBTQIA+ producers making songs and art across the community. Now, with YouTube and other social media having a bigger impact, they’re more easily able to inspire the next generation to step up. And, as it seems, that invites creativity from any medium or platform.

Adri was drawn in with the recent waves of LGBTQIA+ fans, ironically through a 2017 song she calls an “obituary” for the production community. In her everyday life, she’s an 18-year-old lesbian college student who also does PR work for Studio Élan, a lesbian game studio. She’s mostly known, though, as the “PR agent” for MikuMiku_Ebooks. (She runs it.)

Adri made the Miku Ebooks account in March 2018, modeled after similar “ebooks” accounts, which post absurdist humor and memes based around a character, person or franchise. With Adri’s sharp wit and Miku’s appeal, the account quickly spiraled into popularity.

While Miku Ebooks has become a beacon for the community, no moment has made waves like the “Miku created Minecraft” incident. Given the size of its impact, the process was deceptively simple⎯ practically an impulse. For one, Adri considers Miku Ebooks a supportive space for LGBTQIA+ fans, especially given Vocaloid is so heavily concentrated with them. Plus, she always plays her Miku Ebooks jokes by ear.

So, this joke came naturally to Adri. Almost too much so.

“I thought it was stupid and funny,” she recalled. (She later re-emphasized that her philosophy on Miku Ebooks humor is “stupid and funny.”) “Miku is God. She can do anything. Why can’t she erase a racist transphobe from history?

“It’s not even like I felt like I was doing anything too revolutionary—I don’t try too hard to. The ‘it came from space’ joke had already been made. I just vomited it out into the Twitter tweet composition box and hit ‘send.'”

Telling Persson to “shut up” was a similar reaction, something she thought would be both humorous and affirming to other trans fans.

The rest is history.

It’s clear that Adri’s had the situation on her mind for a while. To her, an impulse achieved something relatively positive in the space. But it’s not as easy as pure empowerment.

She points to a philosophy she found on YouTube by CGP Grey, recalling that “anger is an extremely viral emotion.” The anger from those who witnessed Persson’s transphobia, including Adri herself, was a driving force in the moment.

“No doubt that’s how the meme became so popular,” she speculated. “Every single nuclear take imaginable on the subject ended up being made. I likely fed into that more than I should have trying to crack an easy joke, which I regret.” She’s aware of how the meme grew way beyond her means, and she feels she has to tread carefully now.

That’s not to say the ordeal was all bad news. In fact, the weight the meme held meant something positive to her.

“It wasn’t just a dumb, offhanded joke I made anymore, but a rallying cry for the trans community,” she said.

Possibly the most notable tick of disagreement came when the message was relayed by a reliable source that Crypton, still the owners of Miku, seemed to disapprove of any “politics” affiliated with Miku. She’s understanding of that stance, citing the complex nature of opposing forces sharing a single community space, and she’s toned down on the harsh politics of the account since.

“Regardless of whatever I do, I try to be a good person,” she explained. “Navigating the complex structure of internet communities and discourse is a tricky path, but I believe just trying to do good things and set a good example for others is an easy thing anyone can dedicate themselves towards. It’s gotten me this far.”

As a successful Generation Z social media manager, Adri is savvy to the potential and impact she embodies. Much like Miku, the producers and the creators before and beside her, she knows the power of a collaborative community can be an incredible tool.

In spite of frequent cries about the “death of Vocaloid,” Adri is optimistic about the future of Vocaloid, especially in the hands of LGBTQIA+ fans. Technically, as long as anyone owns Miku, or any other voice bank, the community can live on. The popularity of Miku Ebooks only affirms that optimism.

To Adri, especially, Miku Hatsune continues to be a role model for personal growth, creative or otherwise.

“I know of one girl who, as a teenager, looked up to the charming and adorable Hatsune Miku as the epitome of what a girl should be – or could be,” she giddily shares. “That girl’s 6 months on HRT now! Me. It’s me. That girl is me.”