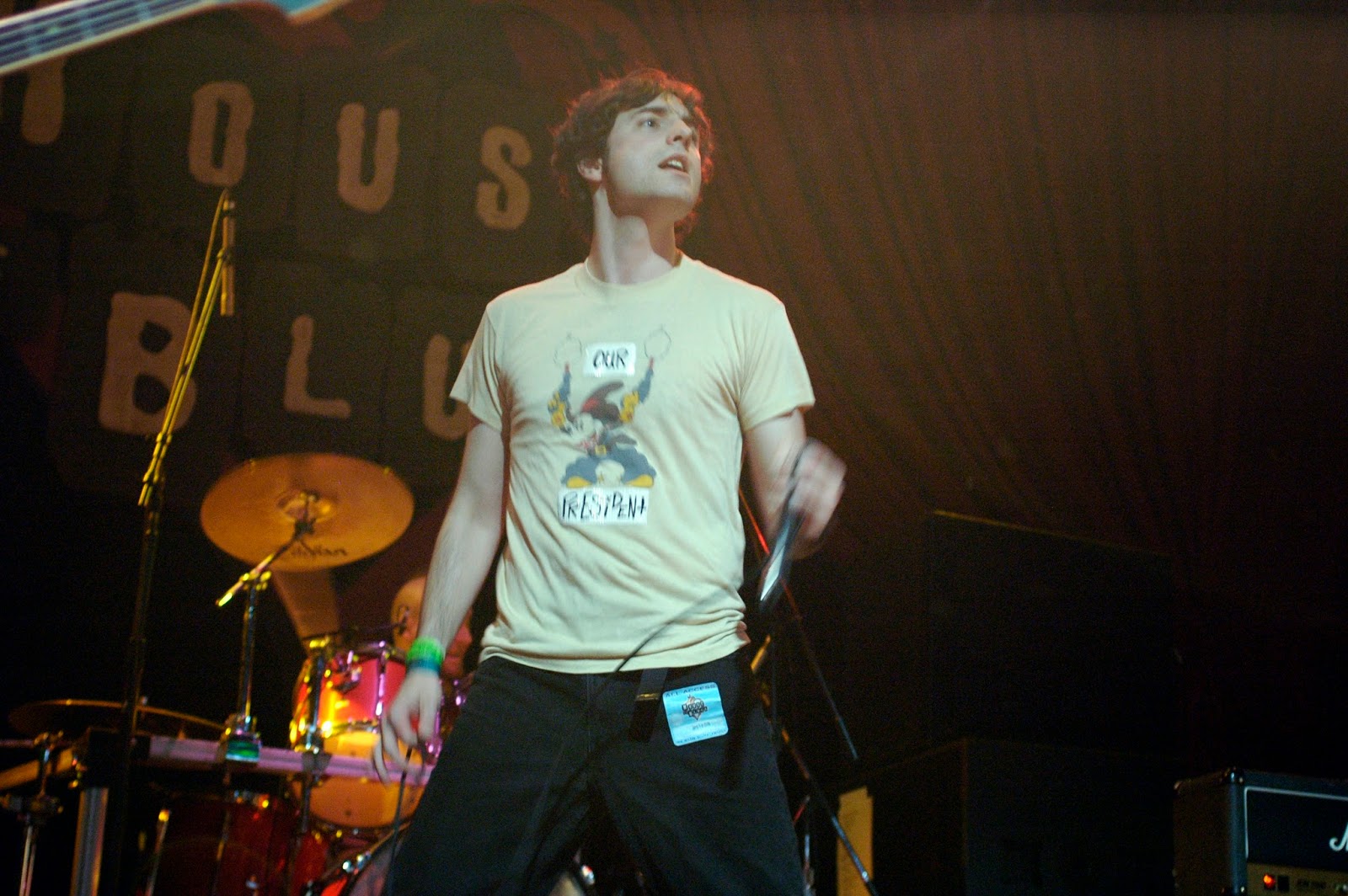 Jeff Alulis is the filmmaker behind the award-winning documentary Do You Remember? Fifteen Years of The Bouncing Souls and two editions of the globe-trotting NOFX: Backstage Passport. He’s also the author who penned an unexpected New York Times bestseller in NOFX biography The Hepatitis Bathtub And Other Stories. Dead Kennedys fans know Alulis best as Jeff Penalty, the singer who fronted the legendary group between 2003 and 2008. Alulis exited the band in what he termed a “non amicable” manner, but he chose not to discuss the matter on-record when it came up in our conversation. Jeff runs a travel blog these days, and Hard Noise caught up with him to ask a few questions about his DK stint, and one about Hello Kitty.

Can you tell us how you came to sing for Dead Kennedys?

I moved out to Los Angeles to go to grad school at USC for screenwriting and immediately started checking out the local punk scene. One night at Al’s Bar, I met this guy Landon in a band called Sidekick. They would play Screeching Weasel covers, and Screeching Weasel is one of my favorite bands, so they would invite me on stage to sing with them.

Landon later ended up as the tour manager for Dead Kennedys when they reunited [in 2001] with Brandon Cruz [singing], and he invited me to see them play. I was skeptical, like most fans, but I was shocked at how good they sounded and how real it all felt, even with the obvious key missing component [founding singer Jello Biafra]. I told Landon that if Brandon ever bailed he had to let me audition. About a year later Brandon injured himself and couldn’t do a tour of Norway, so Landon told the band he knew exactly who could fill in and I got a phone call that I still scarcely believe.

How much rehearsal time did you have before your first tour with them? How often did you rehearse in general during your tenure in the band?

I think I had a little over a month between finding out I was in the band and leaving for the first tour. I couldn’t tell anyone about it until they made the official announcement, so I had to keep one of the biggest pieces of news I’d ever received to myself for at least a couple weeks. I knew the songs pretty well already, but I practiced the full set at least once or twice every day on my own, jumping around and singing at full volume in my apartment. My neighbors were stoked.

I only had one full rehearsal with the band where we went over everything in detail, then we played a secret show at the Viper Room as sort of a live rehearsal, and then we left for Norway maybe a week after that. We didn’t really do formal rehearsals once we started touring, we would just run through a handful of songs at soundcheck as needed. The other guys had already been touring for a while at that point, and I knew the songs back to front from all my preparation, so we didn’t need much practice to stay tight.

What’s the story behind your stage name Jeff Penalty?

Performing those songs, did you feel beholden to the way Jello Biafra sang them or did you feel you had to put your own stamp on them? Did the rest of the band give you any suggestions about that?

Doing a Jello imitation on stage was never even a thought. And even if I had wanted to do one, I hadn’t really seen much footage of the band live at that time. It was the pre-YouTube era, and I had never seen any of their old concert videos, so I only knew the band by what was on the records. I obviously wanted to make sure I was hitting the right notes and such, but it was a conscious decision to not attempt any sort of imitation, physically or vocally, and the band made it clear that they didn’t want an imitator anyway.

I had my own experiences growing up listening to Dead Kennedys songs, and I had my own connection to the lyrics and my own interpretation of what they meant, so that’s what I tried to share with the audience.

Was there ever any talk amongst Dead Kennedys about recording a new album while you were in the band? Many fans have been surprised that the reunion hasn’t produced any new music, for as long as it’s gone on.

We talked about it quite seriously, actually. I put together some lyrics, [Guitarist East Bay] Ray sent me a few riffs, I even spent a few days up in the Bay Area hanging out with Ray and [bassist] Klaus [Flouride] and trying to hash out some new stuff. But the shadow of the Dead Kennedys catalog looms so large.

How can you sit down to write a song knowing that your mission is to match “Holiday In Cambodia?” How can you be open and creative when you know that no matter what you put out, it will be instantly dismissed by so many, and intensely scrutinized and criticized by everyone else? And it’s one thing to be different from Jello when performing— it’s another to be different as a lyricist. Jello sees the world through a uniquely cracked lens. When I wrote through my own lens, it didn’t fit, and when I tried to write through his lens, it was cringe-worthy.

Ultimately, a band is more than the sum of its parts. Jello has gone on to write some interesting stuff with other musicians, but I think most people would agree that it doesn’t compare to the classic DK material. Klaus, Ray, and [drummer] D.H. [Peligro] have all worked with others, too, but similarly have never managed that same early DK alchemy. The thing that made the original version of DK so special was a very specific and fragile balance of personalities and visions and talents.

And no less important, it was a specific time in history. The guys who wrote Fresh Fruit for Rotting Vegetables were different guys in a different situation. They were younger and hungrier and could spend literally hours a day jamming together and weren’t beholden to anyone’s expectations. They were free. We weren’t. I can’t speak for the other guys and I have no idea what they’ve been up to writing-wise over the past 10 years, but I imagine they’ve recognized the same obstacles, and I applaud them for not putting out a sub-par record with the DK name on it.

Is there one particular moment from your Dead Kennedys experience that you can pick as your proudest?

One moment that comes to mind is when we played in St. Petersburg, Florida. A guy showed up with a bunch of red Jell-O and was throwing it at me during the first song. This was something people had done to Brandon before me. Get it? Jell-O? So clever. I wasn’t all that pissed about him trying to fuck with me, I was more pissed that he was recycling such an uncreative and tired joke. But as stupid as it was, it just sucked the wind out of our sails. “Great. This is how the night’s gonna go?”

When we finished the first song, I stopped the set and said something about how terrible his aim was, because he was throwing a ton of Jell-O and had only hit me once or twice. And I gave a little speech to the crowd, acknowledging that it was okay to be skeptical of us. I said something like, “Look, I know I’m not your real dad. I’ll never be your real dad. Your dad’s gone, and I’m not trying to replace him…but I love your mom very much.” I think I hugged Ray at that point, and everybody laughed. “If you’re willing to give me a chance, we can have our own relationship and make our own memories! Okay?” The crowd cheered, and they actually shamed the Jell-O guy and pushed him to the back.

We played the rest of the set and the place went absolutely nuts. It was like one of those videos you see of Olympic Auditorium shows from back in the ‘80s, where everyone’s stage diving and going off the whole time. At the end we were called back for three encores, which had never happened before. It was one of the best shows I played with DK, even though it had started out as a disaster, and pulling off that turnaround is something I’ll never forget.

Your book about NOFX is a New York Times best seller. How big of a game changer has that been for you? How do you view such an accomplishment?

It was like that scene in The Jerk when Steve Martin’s name was printed in the phone book. “Things are going to start happening to me now!” But in any creative field, you’re always hustling to find the next project no matter what your credits are. It’s mostly nice at parties when my wife brings it up to strangers. But I will say that at least it gives me a little credibility when trying to pitch myself. So yeah, if you’re a band looking for a memoir writer, I’m a fucking New York Times bestselling author, so drop a line!

In your article about flying on the Hello Kitty plane, you mention Hello Kitty’s blood type. “…it’s A. And I even know the reason why.” What’s the reason?

This is officially the best question, and it’s my favorite piece of Hello Kitty trivia. Her blood type is A because the most common blood type in Japan is A, so they thought that would make more people relate to her. I guess in Japan blood type is associated with certain personality traits — in a completely non-scientific way, sorta like how we treat astrological signs — so fictional Japanese characters are often assigned a blood type so you can understand them better. If there is one thing I want people to take away from this interview, it is the rationale for Hello Kitty’s blood type. Now you know!