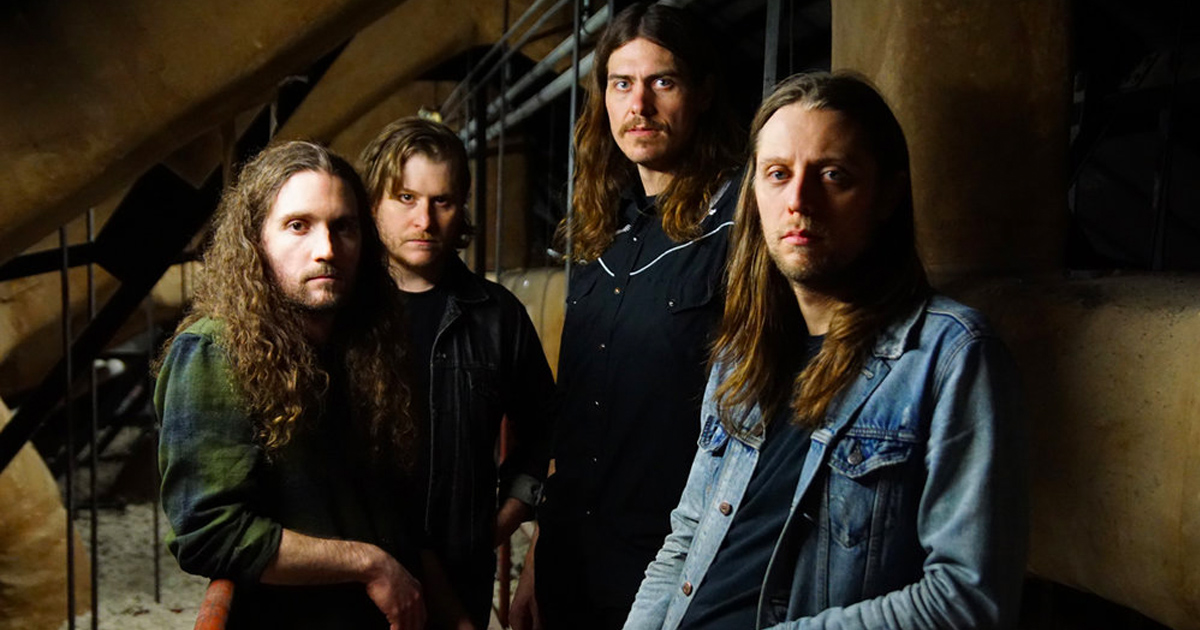 If you told me there was a band called Mountain Dust that took the underground by storm in the 70’s, I’d believe you. The Montreal outfit is steeped in old school heavy rock, and sound like they’d be right at home alongside Blue Oyster Cult and Deep Purple. On top of their masterful riffs and evocative lyrics about demons, storms, and nightmares, the group never shies away from experimentation. They’ve incorporated synthesizers, organs and flutes into tracks, giving their sound a more epic, orchestral feel. Mountain Dust keeps its listeners on their toes⎯ just when you think they’re about to slow down, they suckerpunch you with up-tempo beats and crank the volume to 12.

The metalhead Quebecers grew up attending Heavy Montreal and rocked the festival this year with their blues-laden vocals and fuzzy stoner riffs. Mountain Dust signed to German boutique record label Kozmik Artifactz in 2018 and have garnered worldwide praise and attention. I spoke to synthesizer player Patrick Bennet and lead guitarist Brendan Mainville at Heavy Montreal about their favorite film scores, Scandinavian art, and their upcoming third album.

Hard Noise: This is your first time playing Heavy Montreal after having attended most of the past years. How does it feel to finally be playing the festival?

Patrick Bennet: It feels great, man! The band’s been around for a number of years, we’ve been in Montreal bands prior to this, we got to live our festival life before this, so it’s a cool thing to finally come and do it. A lot of our friends are playing, so they put us on a great year with some good touring bands, some good local bands. We’re loving it. We’re calling it local talent today, but to the rest of the world, this is how they see Montreal.

HN: What are some of your favorite memories from Heavy Montreal over the years?

PB: I got a good one! The first one, me and my friend that I was playing in a band with at the time, we duct taped a bunch of thin vodka bottles to our backs. And we went and watched Iron Maiden! The last time I saw Motorhead was here. A lot of great Mastodon, Megadeth gigs, tons of good shit.

PB: Montreal is a city a lot of musicians move to in Canada. Brendan and I are from Montreal, so the history of this band is definitely informed by people coming and going; of people coming to be artists. It’s got a great music scene! I think the changing of members and the diversity of it, being able to find talent from all over the country that comes here.

Brendan Mainville: It’s that low cost of living. When you’re able to live so cheap, it’s really easy to be a total deadbeat comfortably in your 20s. That leads to a lot.

HN: You’ve said that you’re inspired by cinematic music. Do you have any favorite film scores? How do you try and evoke that kind of sound in your work?

BM: I think a big one was the Dollars trilogy by [composer] Ennio Morricone. That Western twang. It’s all weird stuff in his scores, as well. Just strange sounds, and I think when we started taking the little bit of Western flair a bit further, [we] brought a synth into the band at the same time. Pat plays so many instruments that we’re like, “Okay let’s throw in whatever we can here, let’s make Pat do anything.”

PB: I think all music is movie music. Your life is the movie. Westerns, they can show someone’s eyes for five minutes, with nothing else happening, and the music is so good that everyone is like, “I have to stand up and take a walk.” All that is is the music and, you know, that’s the same reason people love Black Sabbath; it’s heavy and dramatic and impactful and memorable. That was a big impetus for the band.

HN: If your band’s music were a movie score, what would the movie be about?

PB: Some guy dragging himself past a vulture skull but instead of leaving some weird crime, he’s leaving a great party. There’s flies picking at his head, and he’s like, “Oh man, I drank too much last night.” It’s The Good, the Bad, the Ugly as scored by Queens of the Stone Age.

HN: What kind of non-musical art are you into right now?

PB: I saw a Hilma af Klint exhibit in New York City at the Guggenheim, this artist from Sweden. In her will she said that no one can see her art until a few decades after she died. She spent her whole life making these incredible paintings that are fucking mind boggling. I saw that at the Guggenheim in April and it’s been rocking my world a bit. That’s the most recent visual that I’ve been pretty fucking freaked out by.

HN: Are you drawn to stuff that rattles your cage?

HN: Is that how you feel about your art?

PB: That is how I feel about my art, yeah. (Laughs)

BM: I watch too many movies. At least I write while I do it! It’s the only way I can write. I recently watched the new series The Boys. It took a lot of turns that made me stop for a second. Like, I was sitting alone and I was saying, “Whoa, stop for a second!” There was some crazy stuff happening, and I think they did a great job. Looking forward to the rest. I love E.T., I’ve got my boy E.T. down here. (Shows tattoo of E.T.)

HN: Are there any albums off the top of your head that you just have to listen start to finish?

PB: Many, many Deep Purple records that we’ve been nerding out on lately. Second or third era Deep Purple with David Coverdale, we’ve been losing our minds about that recently. I felt like it took us 10 years to get over the Ian Gillan era of Deep Purple.

HN: Do you try and write your music with that in mind?

BM: Oh yeah, absolutely. Every time I start writing new songs I’m always bugging the guys asking, “Can this be a concept album?” In a perfect world, every song we write would follow itself, but we live lives.

HN: What are you up to now?

PB: We’re making our third record, we’re in full swing of that, actually. It’s gonna be really awesome.  We’re about 20 demos deep on it, which is the most we’ve ever written for a record. Usually, we spend a lot of time writing 45 minutes worth of songs and that’s the record. Now we spend the time writing an hour and a half of music. We had a great creative burst to make this one. And I think it’s going to be very next level. We’ve been a band now for six years, we’re no longer green, we’re long in the tooth, now. And also, I think we have a really mature, next level record.

BM: It’ll be a bummer if it sucks. If it blows, we just move on to prog. We’re approaching 40 anyway, so that’s how that works.