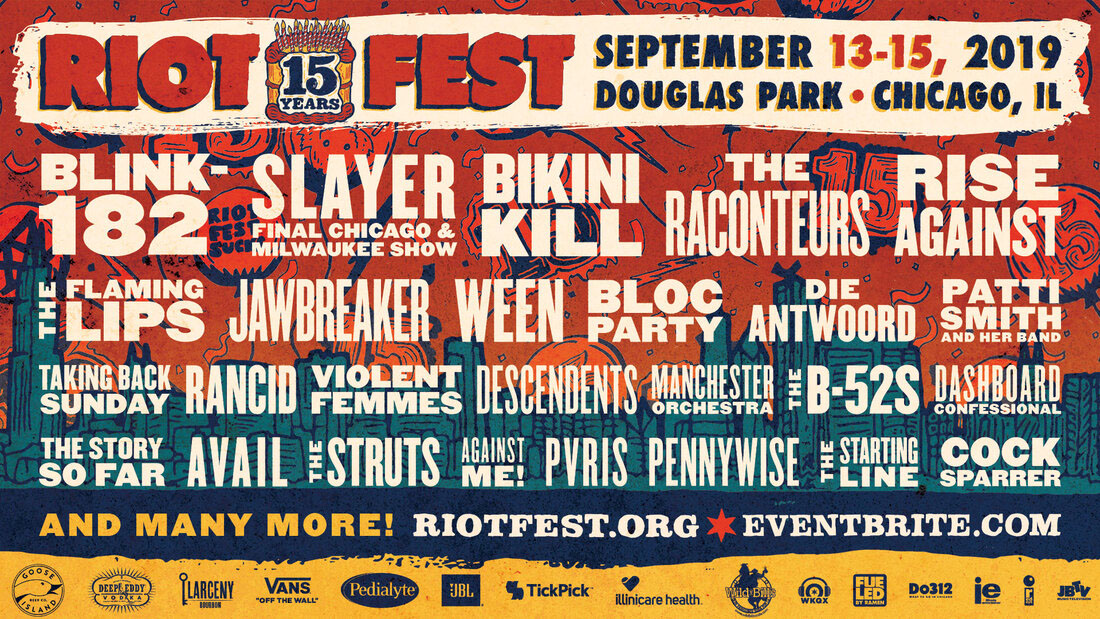 Planning a trip to a festival is one of the most exciting and fulfilling things any music nerd can do. You book your flights, find your accommodation, and starve yourself in preparation for all the local food and booze you’re going stuff into your face. However, the most exhilarating part is thinking about all the incredible performers you’ll see. And when the festival puts both of your favorite bands on the same day? How awesome is that!

And then, they release the schedule. Those two bands are playing at the same time. You want to die.

This is no hanky-panky soup-or-salad decision. This is a real, life-altering dilemma. Do you attentively watch the singer-songwriter that penned the song you lost your virginity to, or rip the pit for the band that irrefutably changed the way you heard music?

Looking at the Riot Fest schedule, the organizers have set us up to make some tough calls. I mean, kudos to them for booking such an incredible lineup, but hot damn, there are some serious conflicts here. Lucky for you, I’ve been to so many festivals and concerts that I think I might just hate music now. I haven’t experienced an authentic smile since Coachella 2013. I recently had to move my program guides and wristbands to a bigger box under my bed. It’s a serious thing.

So with that knowledge in mind, here’s who I think you should see when Riot Fest kicks off this weekend.

Avail vs. The Selecter

The Selecter are guilty of being the band that isn’t The Specials, Madness, or The English Beat; however, these OG ska-punks have some killer tunes, and will be playing their 1980 debut, Too Much Pressure, front to back. Avail, on the other hand is a burly, whisky-soaked punk band that reunited recently for their first shows in over a decade. They might continue playing for the foreseeable future, or they could call it a day next week. Despite the advanced age of some of The Selecter’s members, they’ve been touring stateside surprisingly regularly over the last few years. Go with the more exclusive performance.

Verdict: See Avail and spill your beer in the pit.

Surfer Blood are low-key one of the most consistent indie-rock bands of the past decade. Listen to the swooning hooks of “Demon Dance” and imagine yourself clutching a drink while the sun beats down overhead. Nice, hey? While the group has “blood” in its name, GWAR quite literally spews blood and guts all over the crowd. Surfer Blood are great, but they’re unlikely to decapitate Donald Trump on stage and dance in his bodily ooze.

Verdict: Get icky at GWAR.

Ride vs. Less Than Jake

Very few bands survived the rise and fall of ska-punk in the ’90s as intact as Less Than Jake. Their first few albums are all must-listen, regardless of whether you even like sugary pop-punk with upstrokes, and their sets are always a rowdy, self-deprecating party. Ride are one of many ‘90s shoegaze bands to reunite in the last few years, but they have been the most productive in the studio, dropping two stellar comeback albums. The sublimely catchy “Future Love” may be my song of the year.

Verdict: See Ride and get lost in the ether, baby.

For all intents and purposes, Matt Skiba is a better singer than Tom Delonge.  However, with the pop-punk mega-stars playing Enema of the State front to back, it’s hard to imagine hearing the classic record without Delonge’s unhinged hees and haws. Jawbreaker don’t really tour, have an acclaimed documentary about them, and possess a near-flawless discography.

This is Slayer’s last Chicago show ever, so it will be the final chance for most attendees to see the thrash titans open a portal to hell with their ferocious riffage. But have you listened to Bloc Party’s Silent Alarm? From the thumping drums of “Like Eating Glass,” to the jagged guitar stabs of “Banquet,” to the somber crescendos of “This Modern Love,” it’s truly a modern masterpiece. That being said, how many people have you seen with “Bloc Party” carved into their flesh?

Against Me! Vs. Streetlight Manifesto vs. Guided By Voices

Against Me! is performing not one, but two classic albums from different points in their career. Guided By Voices, on the other hand, will be playing a set that includes super-catchy cuts from their 3,457 albums of low-fi pop.

Streetlight Manifesto is the wild-card here. While they were lumped into the tail-end of ska’s third wave, Streetlight offers so much more than your average checker-clad group. Their picture-perfect discography blends the best parts of basement punk, jazz-school musicianship, Latin-Caribbean rhythms, and neo-classical flourishes. Additionally, Thomas Kalnoky is one of the most underrated lyricists in punk history.

Verdict: When Streetlight is there, so are you. Feel free to scream yourself hoarse to “Pints of Guinness Make You Strong” first, though.

Raconteurs vs. Ween vs. The Ergs!

The Ergs! are at least in the top five bands ever to put an exclamation point in their name, and offer a mega-fun blend of infectious pop-punk and dorky nonsense. The Raconteurs have Jack White at the helm, and he’s maybe his generation’s most untouchable rock star.

Verdict: Ocean Man, take me by the hand to see Ween.

Rise Against vs. Wu-Tang Clan vs. Manchester Orchestra vs. Andrew WK

Local stadium-punk heroes, iconic hip-hop group, a shape-shifting alt-rock outfit, and the prince of parties. This one sucks.

Recent Wu-Tang performances have received mixed reviews from fans in regards to certain members’ engagement, but if you’re a hip-hop fan and you haven’t seen them before, just go do it. Rise Against are local legends, but they haven’t put out a truly incredible record in over a decade. Manchester Orchestra have morphed from their emo-adjacent early material into folk-rock giants that could go toe-to-toe with Fleet Foxes and early Bon Iver, but do they sing songs about getting shitfaced and have a mind-warping conspiracy theory surrounding them? No, no they don’t.

Flaming Lips vs. Descendents vs. Glassjaw vs. Rancid

When you have four legendary acts like this all at the same time, you might think it would be hard to make a call, but the solution is actually quite simple.

First, cryogenically freeze yourself and have the underground agency thaw you when the following things are available: shared-consciousness technology, human cloning, and time travel. That last one is key. Once you’ve thawed, visit the nearest cloning agency and make three versions of yourself. Then go to the nearby shared-consciousness broker, and link yourself with your three clones. Finally, take yourself and your three doppelgängers back to 2019, where you can enjoy these four iconic acts all at once.

Verdict: I hope you and your clones revel in a pseudo-orgasmic joy that no one else from our pathetic generation will get to experience.