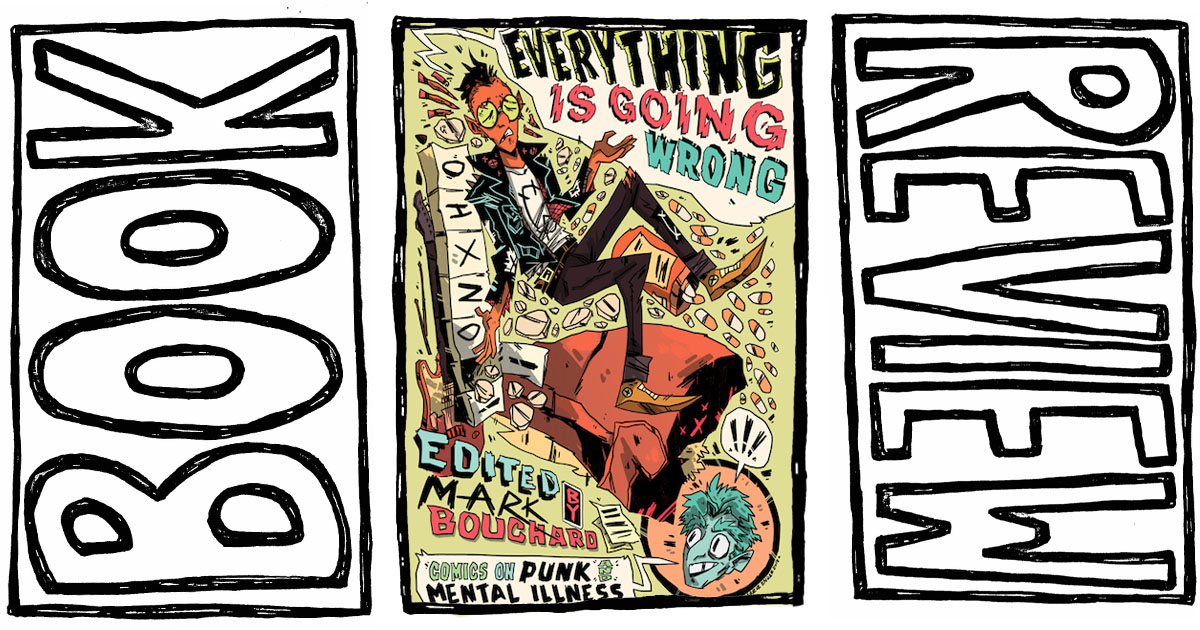 Everything is Going Wrong is a comprehensive, brutally honest exploration of mental illness and punk

Remember feeling like a switch flipped in your head the first time you listened to an old punk record or slammed around in the pit? For the artists whose stories fill these pages, there’s so much more to getting into punk than feeling welcomed for the first time: it’s more akin to salvation.

Everything is Going Wrong raised over $12,000 on Kickstarter back in May, and now the sprawling, ambitious collection is finally out in the world⎯ a dense and vivid kaleidoscope of experiences by musicians, makers of comics, and punks of all stripes.

The more than 40 works collected here range from wry confessionals to utterly open, devastating recollections. Featuring the words, lyrics, and art of Shelby Criswell, Frank Turner, Keith Buckley, Lukasz Kowalczuk, Nadia Shammas, and so many more, some pieces are revelatory, others painfully close to home. As a punk comic book, EIGW is great, but beyond that, it feels necessary. Whether autobiographical or fictional, these comics and essays touch on a dizzying range of topics: sexuality and gender intersect with mental illness, alcoholism, and abuse. Throughout it all is the undercurrent of deeply human experiences backed by the reassurances of crunchy power chords and shouted lyrics.

Punk is not always comfortable, whatever else it is, as it extolls, breaks ground, beseeches, and makes demands. And as too many people in the community know, the danger doesn’t go away once you find your chosen family. Consider Alyssa Kai’s stark observation in “On Punk,” that “Some people are on vacation here, and some aren’t gonna leave here alive.”

Some of the comics, like Brian Level’s “There It Is,” vividly illustrate the terrible sensation of being overcome by one’s fear, anxiety, and demons. Others, like Shelby Criswell’s “Anxiety Punk,” take the shape of a celebratory ode, in this case to the punk bands who’ve helped ease the pain of gender dysphoria.

Marie Enger’s “Thanks, Bastard!” is a meditation on schizophrenia that plays out as a dialog with herself⎯ vulnerable, angry, hurt, and honest about the utter lack of understanding she faces from the world at large (Enger also provided the excellent cover art for EIGW). Comic art’s power, as a visual medium, is clear to see here: a striking hallucination, depicted in every frame with Enger, offers a closer glimpse at life with schizophrenia than most people without it are likely to encounter or, let’s be honest, seek out, on their own. Punk becomes a refuge, “a place where humor and energy can be used to mask wildly depressing lyrics.”

The artists in EIGW also ask some difficult questions about how healthy this close connection between mental health and the production of artistic work is. As Dave Anians puts it, “On one hand, my songs have forced conversations and hard truths out of me when I wasn’t able to make that happen otherwise. On the other hand, am I still keeping too much inside, waiting for the right song instead of just talking about things as I experience them?”

These raw, intimate comics illustrate the dire straits that so many creatives find ourselves in daily. In all likelihood, you’ll see yourself or someone you know on these pages, and like your favorite furious record, it might be startling at first; but combined, these stories form a resounding call to action and a reminder of the power of community to be found in punk.

“How the hell am I supposed to know if punk is fucked up or not when I’m still figuring out how fucked up I am?” asks Alyssa Kai. Hopefully EIGW can help you navigate this age-old dilemma and feel less alone, and more empathetic, while doing so.

All proceeds from the sale of Everything is Going Wrong benefit the Trevor Project and MusiCares.