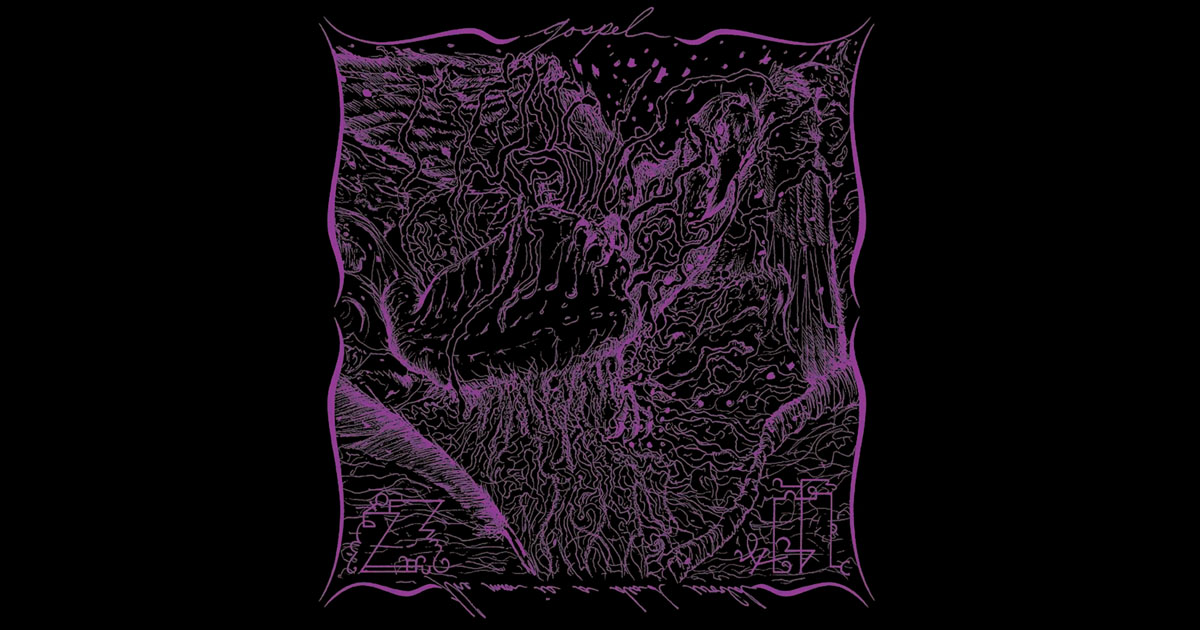 The Conquest Came and the Noise Died Down: An Interview with Gospel

If you try to google the band Gospel, or even “gospel hardcore band,” you’re going to be so completely shit out of luck⎯⎯ unless you’re looking for worship tunes, in which case, you’ll hit the jackpot. That slight digital incorporeality, combined with their long stretches of silence, only adds to Gospel’s near-mythic allure.

It’s difficult to pin the New York post-hardcore band down to a single genre, but they hover somewhere in the prog and screamo arenas. Their seminal, and for the time being, only official release, 2005’s The Moon is a Dead World, has long attracted moths from a variety of musical subcultures to its flame-engulfed soundscapes. Though comprised of only eight songs (several of them instrumental), the album feels like a true epic. It was recorded in Salem, Massachusetts by Converge’s Kurt Ballou, and when it arrived, it stood defiantly apart from many of its contemporaries⎯⎯a tight, technical antithesis to the sloppy garage rock that still proliferated in the airwaves at the time, with powerful cinematic layers that made dancepunk seem even more like kids’ stuff than it already did.

Vocalist and guitarist Adam Dooling, drummer Vinny Roseboom, bassist Sean Miller, and keyboardist/guitarist Jon Pastir⎯⎯in their own words, “four guys from working class backgrounds,” crafted cerebral, prog-infused hardcore with healthy doses of snark and bleakness balanced by earnest emotion. Gospel borrowed from the early prog tradition, prizing organs and analog synths for their ability to carry the songs through complex, pounding rhythms and foreboding atmospheres. Dooling’s screamed-to-the-point-of-obscurity lyrics plumbed the depths of human pathos while remaining somehow grounded and tangible. See this verse from “Golden Dawn” that begins with the endlessly quotable, “Hey you, you got a cigarette, man?”

You know I know you got one on ya

I usually keep mine in the backseat

But it’s buried behind all the rubble

You’ve probably heard similar stories before, and have guessed where this one’s headed: Gospel disbanded after a successful tour with Converge, in some sense dissolved by their own ambitious artistry. You can read a lovingly-detailed history by Michael Friedrich here. Where do you go after The Moon is a Dead World, with all its ranging soundscapes and deep psychological dives? For the members of Gospel, who have since started families and careers separate from music, the answer is ever-forming. 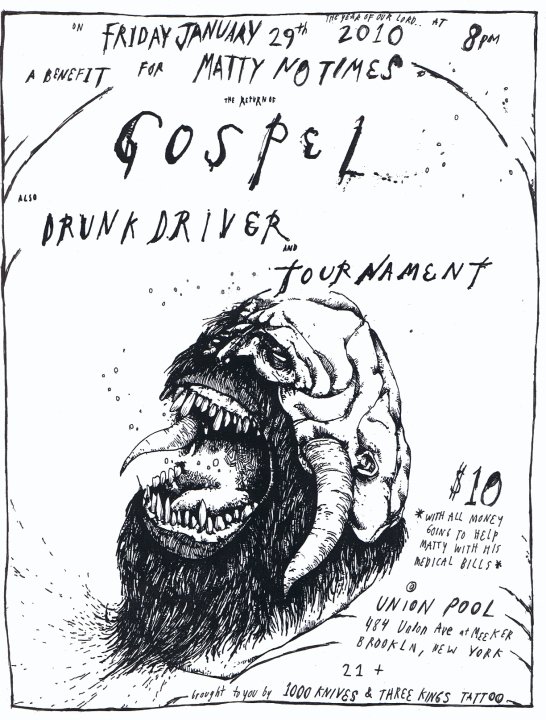 Other than a brief Gospel reunion in 2010 for two benefit shows, both to raise money for a friend who needed a liver transplant, the band stayed quiet and lived their lives. Then, as suddenly as they had gone, Gospel reappeared.

The Moon is a Dead World got the vinyl reissue treatment this past January, on Repeater Records. Gospel’s previously-dead facebook page began to slowly reanimate. Now, they’re on the cusp of a sold-out reunion show at St. Vitus, where they’ll play Moon favorites as well as some highly-anticipated new tunes. Notably, these will be among the first songs written with Jon Pastir’s input, as everything on Moon except “Golden Dawn” was written before he joined the band.

When we talked on the phone, the guys were gracious, patient, and seemed in good spirits despite the fact that their final practice session before the show, already delayed (thanks, New York traffic), was now getting pushed even further back to accommodate my spacey questions about the band’s legacy and what’s next.

There’s something almost too on-the-nose about how the latest Gospel reunion came about. “I was moving back to New York,” Dooling begins, “and around the same time, our buddy Matt was getting married.” Sidenote: Matt was also in the practice space with the band when we talked; further proof that despite their dizzying art-rock mix of influences, these really are a band of hometown loyalists, old friends⎯⎯regular guys who make astonishing music.

“So Matty was getting married and I came out to his wedding. It was actually Vinny’s dad who kind of twisted my arm enough to hop back into it,” Dooling explains. “But it was really great to see everybody that night. It was good to reconnect with everybody. It was just a matter of us all being relatively in the same area again.”

The casual, easy nature of Gospel’s reunion stands in stark contrast to so many of the endless reunion regurgitations we’ve seen at festivals and arenas in recent years, spurred by grasps at relevance or financial need. It’s the best of all possible worlds for longtime fans: a reunion driven simply by, as the guys put it, “the joy we get from playing with each other.” And of course, proximity helps, given their extremely busy lives.

It shouldn’t come as a surprise that an album whose title refers to a dead world is steeped in a grandiose kind of dread. The opening echoey guitars of “Paper Tigon” and “Opium” hint that something deep and dark lurks beyond the horizon, and “Golden Dawn” and “What Means of Witchery” belong on apocalypse playlists. Sometimes chaos is the only logical response to chaos⎯⎯although in fact, Gospel are anything but disorganized, the intricacies of Miller’s bass lines and Roseboom’s furious roiling drums sweeping you along to receive Dooling’s urgent howls and Pastir’s wheeling keys.

Asked whether music’s role as a conductor of emotions or rejoinder of injustice had changed for them in the past 14 years, Dooling responds, “I think it’s cathartic, and this feels a little righteous. Everything sort of feels like a reckoning is about to come, or has come. I think largely why we stopped playing Gospel the first time around⎯⎯speaking from a personal perspective⎯⎯at some point, I stopped being angry and didn’t really want to scream about shit anymore. It just felt stupid. I don’t take a lot of pride in channeling my outrage. I try to do it in a productive manner and in a way that’s sort of cathartic and remorseful.”

He adds, “So, given the state of things, it makes sense that we’re playing, because we have a lot of shit to complain about and a lot of things to work through. The band is kind of a godsend at this point because it’s enabling us to work through a lot of our shit. From the world and within ourselves.” 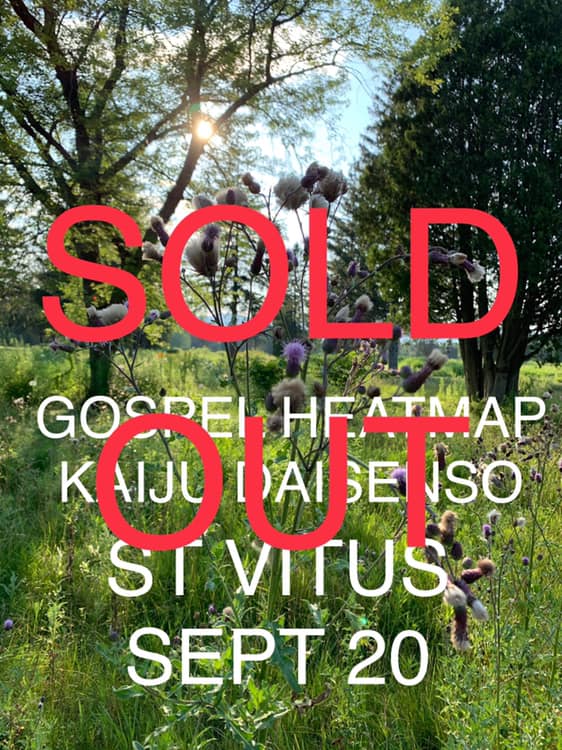 Given all this, it makes sense that Gospel are looking ahead to new music. As a whole, the band agrees with Roseboom that writing new songs together “feels a lot better than the old stuff we used to play⎯⎯more fun, more organic.” He likens the experience of carving out music-time from their regular jobs to a vacation; the kind where you’re stuck hiking up a “fucking volcano,” but a vacation nonetheless.

Pastir adds, “We don’t really get a whole lot of joy out of playing the old songs, but it’s great when we can play them really well,” and, like so many points in our conversation, this slight dig inspires laughter from the band.

I ask if that mean we’re finally getting the completed “Magic Volume of Dark Matter,” a never-recorded album-sized song that looms enormous in Gospel’s lore. Here’s a fun fact: the word “gospel” comes from “god spell,” an old translation of “evangelium”⎯⎯Latin for “good news.” So here’s some really fucking good news:

“Hopefully! We have other new songs we’ve been working on that we need to record,” says Miller. “Songs we wrote a few years ago when we were playing. ‘The Magic Volume’ is a huge undertaking, but we are hoping to get everything recorded.”

Given all they have on their plates, my selfish hopes for a West Coast tour are quickly but gently dashed by Roseboom: “Not right now, darlin,’ no.” But the band did mention several times that  they’re preparing to enter the studio again, most likely this Winter⎯⎯although they don’t want to add any unnecessary pressure to the process, so they’re staying flexible with it for now.

“It’s probably going to be called Absurd Challenge,” quips Dooling about the next album. “Because it is.” But Gospel seem more than up to the meeting the task, on their own terms. Praise be.

Editor’s Note: An earlier version of this interview misattributed the quote about a West Coast tour and has been updated