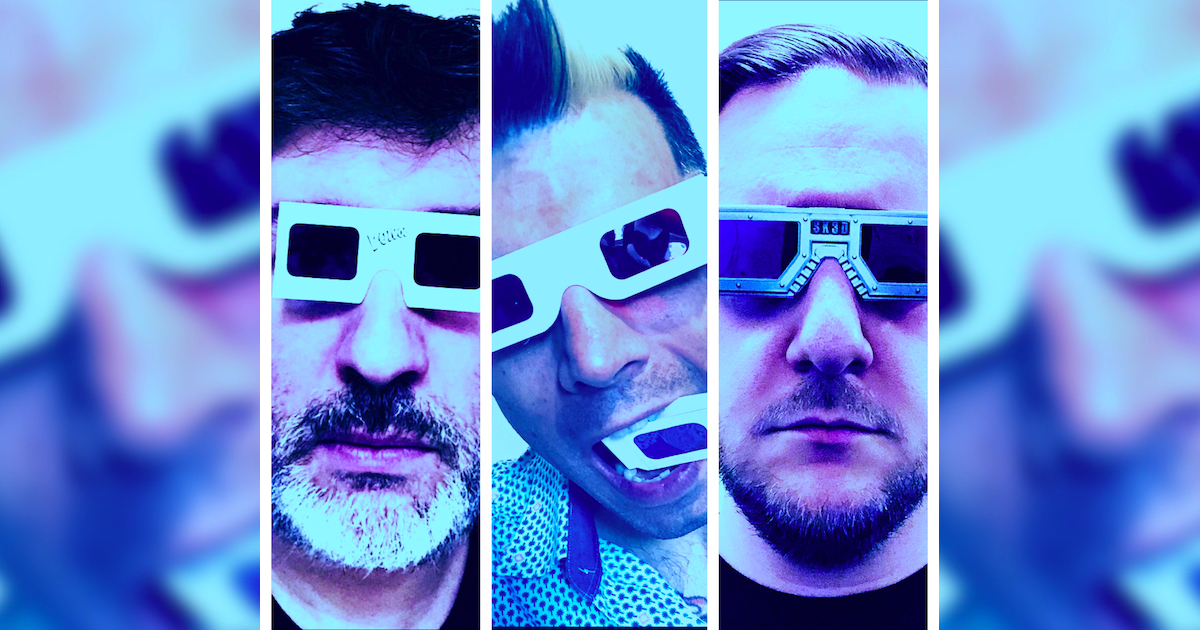 Zombie Apocalypse is a thrashy, brutal metalcore band from the Northeastern U.S. best known as the side project of guitarist Matt Fox, the mainstay behind Florida hardcore legends Shai Hulud. Together with co-vocalists Ronen Kauffman (also the group’s lyricist, formerly of New Jersey’s try.fail.try) and Eric Dellon (ex-Shallow Water Grave), the Zombie-themed trio just released their first effort in nearly 15 years, Life Without Pain Is a Fucking Fantasy.

The whirlwind collection — 10 songs in total — clocks in at just under 15 minutes, which should impart a decent sense of the urgency portrayed in its crushing anthems that range from challenging (“Bullshit Destroyer”) to panic-inducing (“We Still Might Be Dying”). It’s a captivating tour de force of cerebral deathcore from the undead crew; it’s also probably the best thing that Zombie Apocalypse has ever released. But it almost didn’t happen at all.

Kauffman, a special education teacher who currently works with elementary school students, nearly quit the act before recording the album. Instead, circumstances led the vocalist and educator to use his ample life experience — which includes devastating traumas and relatable setbacks — to drive the effort’s cathartic charge.

“I didn’t feel I had the capacity,” Kauffman told Hard Noise of the period leading up to the new album. “I was having a hard time figuring out how to make this kind of music and have it be authentic at a time in my life when, quite honestly, the world is a much noisier place than it was even 15 years ago. With all the things that are going on, I didn’t know if I wanted to contribute to that. I didn’t know if the world needed another guy screaming. And I also couldn’t figure out, like, what do I scream about that’s authentic? Stuff I feel that’s a match for the aesthetic of Zombie Apocalypse?”

That aesthetic, as one might have guessed, filters Kauffman’s lyrics through a barrage of imagery associated with “things ending and things that are dead coming back to life,” as the vocalist put it. So what inspiration did the full-time educator and frequent musician intuit when writing such an album? With some distance, Kauffman was able to harness the hardships he faced in the past and explore them in a new way, even though the vocalist is now “a 43-year-old guy,” he offered. “I’ve got a kid, I teach kids. And I try to cultivate a sort of very quiet life.”

But it was an altogether different scene for the vocalist 18 years ago. Kauffman was living in New York City at the time of the September 11 attacks, and the collapse of the World Trade Center had a profound impact on him–as it certainly did for 8 million other NYC residents, not to mention the rest of the country. At the time, he was a young man just a few years into his professional career.

“I had gone to school and acquired a masters degree in teaching before September 11,” Kauffman remembered. “And I was living in the city, in Greenpoint, working for a nonprofit organization in Lower Manhattan. But I was close enough to have a pretty traumatic experience. And that experience was extended by being around everything that followed. I wound up getting fired from my job, and I was just sort of like, ‘Fuck it, I don’t even know what just happened.’ I went back to New Jersey, where my people are, and I developed some pretty classic PTSD.”

Humbly, the musician claimed his is “not a remarkable story, especially compared to other people who were closer and saw worse things than I did” on that tragic day. All the same, Kauffman still sought psychiatric help to manage his mental distress. “Over time things got easier,” he said in hindsight. But if that event wasn’t enough to seriously damage the vocalist’s psyche, more catastrophe was to follow.

“Then about five years ago, my family experienced a very large house fire,” Kaufmann explained. “It was traumatic. We were displaced and had to live in a hotel for several months — with my son, who was five at the time. It was in the dead of winter, across from a scrapyard in Secaucus, New Jersey. After that, I had an extreme spike in my anxiety problems that were linked to my stress disorder, and it made me really sick.”

Following that calamity, the vocalist couldn’t seem to find further aid via traditional routes. “Again, I went to professionals to try and get some help,” Kauffman recalled of the aftermath. “No one could help me, for whatever reason.” But as fate would have it, he ultimately found the personal peace he required through meditation and yoga.

“After that, everything changed,” he relayed. “I eventually started meditating and found enormous success with that. Then I got into yoga, because I heard that would make my meditation experience better. They’re both now enormously important to me. I haven’t missed a day since I started. I’m even working professionally to get into that space a little bit in my role as a teacher.”

The timing of this awakening couldn’t have been more fortuitous. Although he had his doubts going in, the clear mind afforded to Kauffman — as a result of his newfound practices — gave him the boost he needed to rejoin Zombie Apocalypse in earnest. Sure, he’s had the wherewithal to successfully instruct kids for almost two decades, but the band had been dormant for most of that duration. So when things finally got going for Life Without Pain, the vocalist was able to dig deep to deliver on his share of the album’s creativity.

“A lot of the songs on the record are reflective of personal changes I’ve gone through in the past few years,” Kauffman laid out. “I started to get my head right around the same time it was do-or-die time for the album. It was just a magical confluence of timing that coincided with me being able to correct myself a little bit, to get a little steadier. And, in turn, to have some great inspiration for the stuff that I was responsible for. Which were the words.”

Indeed, as guitarist Matt Fox previously told Outburn, he and secondary vocalist Eric Dellon began writing music for the new album “roughly five years ago.” That lines up with the timing Kauffman illustrated, when his family was building back up from literal ashes after the catastrophic blaze. By the time the songs were ready for lyrics and vocals, Kauffman, who writes the words and arranges all of the band’s vocal treatments, had started on his path toward psychological wellness.

But listeners have Dellon to think for the first seed of inspiration. Although he’s not an original member of the band, it was Kauffman’s co-vocalist who began sending Fox song ideas that laid the initial roadmap for Life Without Pain. (Zombie Apocalypse formed in 1998 with Fox, Kauffman and linchpin Shai Hulud bassist Matt Fletcher. Dellon was recruited after contributing vocals to 2003’s This Is a Spark of Life. A split album with Send More Paramedics followed in 2005.) This time around, Fox and Dellon challenged each other to write five guitar riffs a piece. The method paid off, as the guitarist recently noted to Decibel.

“The overall ‘spark of life’ definitely came from Dellon,” Fox recounted of the new album’s gestation. “He would send over these great riffs he was writing, and at some point I said they would be awesome for Zombie. From there we slowly but surely started assembling a collection of our mutual ideas that eventually became Life Without Pain Is a Fucking Fantasy.”

However, there’s at least one minor exception to the standard Zombie Apocalypse writing process. Opener “Hey, You Pissed on a Snake” is a full-on Fox creation, with lyrics crafted by the Shai Hulud figurehead. The simultaneously hilarious and cautionary tale of a veritable Darwin Award winner sets the tone.

From there, Kauffman and co. lead the listener through the sonic manual aimed at overcoming fear and insecurity in the end times. On “Brave Digger,” being buried alive with worry is turned into a soliloquy of reanimated grace. (“Dig deep until the air starts to cool / Dig until the sunlight above you seems far, far away / Panic grab anything you can / Prepare to know that you’re unprepared.”) Deep cut “Holy Fuck, We’re Alive” yields the opportune album title in its clamor of capitulated awe. (“You’re alive, just like me / We won’t live forever / Life without pain is a fucking fantasy.”)

Released August 9 by Innerstrength Records, the album’s a befitting achievement and a welcome return from the outfit. The band even has a show lined up later this year to promote it. They’re scheduled to open for Bay Area thrash veterans Vio-lence on the second night of that act’s upcoming reunion tour November 9 at NYC’s Brooklyn Bazaar. For Kauffman, it’s the icing on the cake after the vocalist’s long journey toward personal redemption, all told through horror fiction iconography and not-uncertain doomsday forecasts on Life Without Pain Is a Fucking Fantasy.

“I never would’ve guessed that we would make another record,” Kauffman expressed. “We were saying when we recorded it, like, ‘Who’s gonna listen to this? Yeah, the 14 people that like our band are gonna be really excited.’ When we see that we’ve got, like, 50,000 streams on Spotify or whatever — if we were a band that did this for a living, that would be almost a death sentence. But to us, it’s like, ‘Holy shit!’ It’s so cool.”

On the surface, it may seem incongruous for a special education teacher to front a blistering metalcore unit creating songs about zombies and the end of the world. But to Kauffman, each activity simply informs the other, making him a more well-rounded person. It’s an approach he attempts to instill in all aspects of his life: teaching, parenting, performing, and beyond.

“I’ve always tried to have my disparate interests inform one another,” the vocalist said. “I tell my students, I tell my son, and I try to practice this myself: It’s powerful to be interdisciplinary. To know how to do, and know about different things makes you better at all of those things. In terms of why I do any of it, it’s all completely the same. For whatever effort I have available to me in this life, I want to find positive ways to share my experience with people. To try to give people something to chew on and think about. And, with this, to offer something that fuckin’ sounds cool.”

Kauffman added, “I think in life you should do as much as you can, and give more than you take. Teaching and Zombie Apocalypse are both ways that I try to do that.”