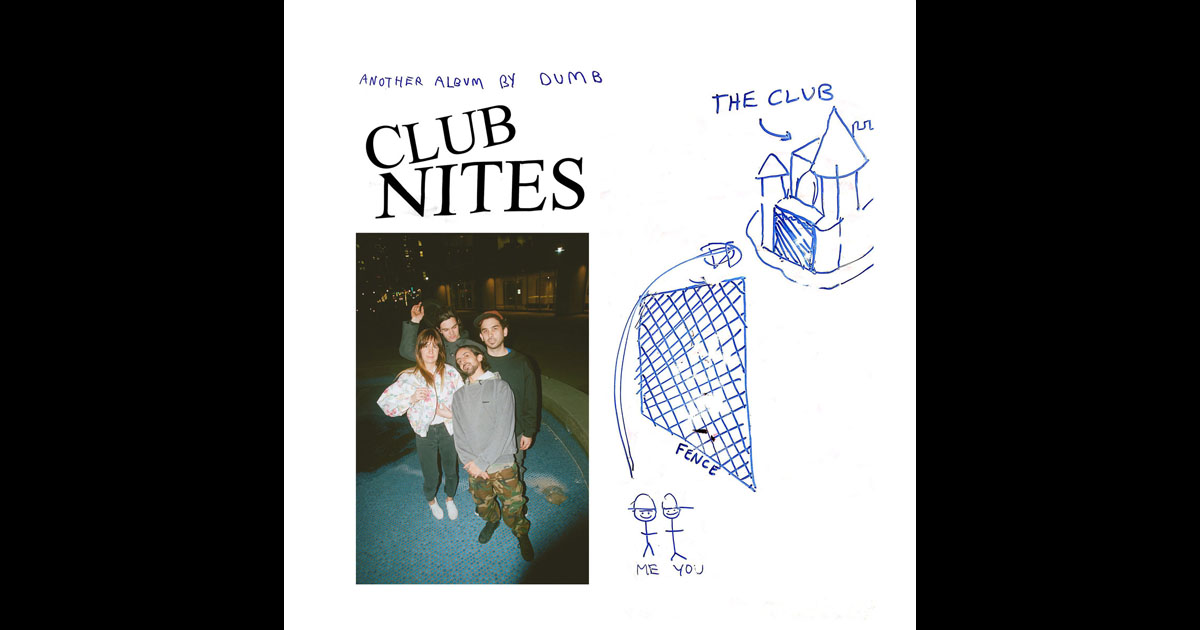 Interview: The Dumbest Band in the World

Franco Rossino has one of those fakeout voicemails. He says “Hey,” followed by a pause, and then a chorus of his friends helps you realize he’s not actually there. It’s not a big surprise. The very existence of his band Dumb would seem like a prank, if not for the fact they’re so good. When I attempt to interview the frontman of the spiky Vancouver indie-rock band during their fifth or sixth U.S. jaunt, they go dark to both me and their publicist for a few weeks. And when we do eventually make contact, he’s quick to wave away the narrative that their frequently scene-trolling lyrics are taking a piss on anyone, not just in particular, but at all. On the band’s excellent new Club Nites, their second album for Mint Records, one of Rossino’s many fired missives is, “You think this clout shit’s pretty funny, man.”

“That’s something my friend will say when I can’t hang out with him,” Rossino explains via phone from back in Vancouver. “’Eric, I can’t play Fortnite with you today…’,” he mimics. “It’s not like there’s actual people where I’m like, ‘this person’s into the clout game, fuck them’ or ‘this thing happened in the scene in 2017 and fuck everybody who thinks this way about it.’” Then the guitar-wielding wiseacre says something not intended to be ironic: “It’s really not the most self-aware album.”

The thing about the four 28-and-29-year-olds in Dumb is, the bands they take after, like Archers of Loaf and Minutemen (often described with one of those now-trite rock-review words like “angular”) are three or four generations removed from them, and with the benefit of online scope and hindsight, these new kids know that scene politics are silly. But that doesn’t mean it’s not fun to inhabit gatekeeping cranks in spirit. “It’s interesting to try and figure out the point of view, what’s in quotes and what’s in character,” Rossino says, calling himself an  “unreliable narrator” and this meta, sarcastic persona as “putting on a character in jest.” My favorite press quote is when Brooklyn Vegan called them an entire band of “Jimbos from the Simpsons.”

“The non-self-aware part is, I’ve seen reviews saying I’m critical. I guess it’s hard to personate someone without being critical. It’s really just making fun of those words in and of themselves,” he admits. Considering he’s in a band named Dumb that’s fully aware of many, many other existing ones sharing the moniker and doesn’t really care about legal ramifications, you can tell he takes delight in not overthinking this shit. (His community prides themselves on such fellow “ungoogleable” band names as Weed and Swim Team.) Their one-word humor even translated to their first single for Mint Records: “Mint,” it’s called.

Dumb — Rossino (vocals/guitar), Shelby Vredik (bass), Nick Short (guitar), and Felipe “Pipé” Morelli (drums) — began in late 2015 or early 2016. The striking name was Short’s idea. “He always wanted to be in a band called Dumb. I didn’t like it, I thought it was dumb, you know?” Rossino can’t possibly expect me to laugh when he pauses here. “I thought it warranted too many stupid comments from other people. I like it now. It grew on me.”

Why did Dumb come together? “We just wanted to be in a band. We had a lot of… scene commentary that we wanted to make.” Dumb’s Bandcamp describes Club Nites as epitomizing the “nightlife ecosystem,” and Rossino and Vredik work in those environments firsthand, at a venue and as a bartender, respectively (Morelli is a screen printer and Short works in construction).

“We spend a disproportionate amount of time drinking and going out,” Rossino says. “A lot of people think the album is a critique of it, but that would be too much like having your cake and eating it too. It’s more like we like to go out and party, and here are some songs about it. A press release will say ‘they’re doing social commentary’ which is fine; I’m sure we are being critical about the club.”

Rossino’s call follows a “little excursion out to a river” for a dip that just happened to include all musicians, members of Dumb and Pardoner and Cavegirl. I hear him yell to Dumb’s drummer, “Felipe, what percentage of your friends would you say are in bands? Yeah — 50.” Everyone in Dumb is also in another band from a music collective they call Choms, synonymous with a Vancouver recording studio/artspace they all frequent. Sometimes Rossino outsources lyrics to a friend named Quincy: “He’s kind of in Dumb. He’s been on most of our tours with us, does merch. Very mysterious guy, he doesn’t do much. Pretty useless otherwise.” It’s harder to tell if he’s joking when he says, “As I poet I think I’ve flatlined.”

After some early music that Dumb eventually took down from Bandcamp (“it was bad”), the pivotal release for them was 2016’s Beach Church, which features some familiar dissonance but also much more emotional vocal style from Rossino. Then they were signed to Mint, which both helped them take the music more seriously and inadvertently led to a sound. By then, they’d already toured the U.S., particularly the West Coast a handful of times. “The amount of inter-dating between Vancouver and the Bay area right now is incredible,” Rossino deadpans.

Opening for Parquet Courts back home in 2016 was “our first big gig that wasn’t like, at my house” he says. “It was weird because in Vancouver, nobody knew who we were at all. But there were tons of people there.”

Parquet’s influence on Dumb can’t be understated, even if Rossino says he grew up listening to Ozzy Osbourne and Primus. He talks, barks, and shouts more than he sings these days, and leaves the melodic elements to his and Nick’s bumper-car guitar collisions, which accidentally stumble into John Fahey-style ragtime on “Don’t Sleep.” Their tunes circa 2018’s excellent, abrasive Seeing Green and the more accomplished and memorable Club Nites are refreshingly riff-based, and only the latter’s highlight “Beef Hits” deviates from guitar-bass-drums with a squawking sax finish. (“We thought ‘Beef Hits’ would be a banger, so we were like ‘Why don’t we put [the sax solo] in the banger.’”)

For a playlist-era band, Dumb are an anachronism. “I feel like there’s a lot of vibe-based music where it’s all about the overall feel. The mouthfeel. Earfeel,” says Rossino. “If you want to listen to music while working out, it’s probably pretty nice, but I don’t know. I don’t want to speak for the whole band, but I feel like there’s really low utility in [our] music.” He doesn’t really expect to make money, which is why he changes his voicemail to something “less freak mode” in fear that it will cost him the coding job he just interviewed for. (One of the new songs is titled “Slacker Needs Serious Work.”)

About those other bands named Dumb: “There’s one indie-rock band from the U.K., another Dumb in Austin, they’re like cowpunk. There’s another Dumb in Vancouver, there’s a NoMeansNo show poster in the Mint Records office with a whole other band called Dumb on the bill,” Rossino says. Is he or Mint concerned about legal stuff? “No, I don’t think so. The people in the Austin band Dumb we had some kind of communication with, they were chill I remember.” They all need to get together and play Illinois’ Dumb Fest, I tell Rossino, but I can’t possibly expect him to laugh.

Dumb’s Club Nites is out now on Mint Records.