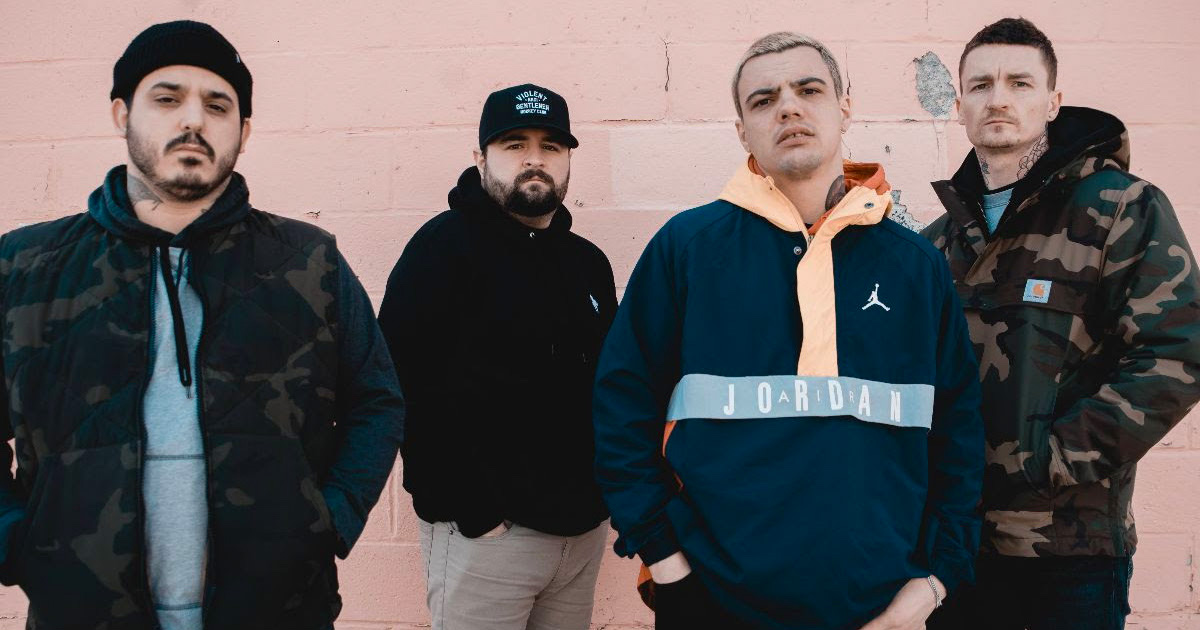 Interview: On Stray From the Path’s Latest Album, the Personal is Political

For as long as punk rock has existed, sociopolitical issues have rotated in and out, often sharpening the music’s focus and message. New York rapcore heavyweights Stray From the Path perhaps haul this lineage better than most. In the past, the group has tackled subjects as varied as overconsumption, police brutality, and the dismal state of the healthcare industry. Among fans of heavy music, the band’s politically-charged hardcore anthems bear the hallmarks of a call-to-arms. Now, the outfit is ready to aim that power in a more diffuse direction. After all, the most militant of “us versus them” outlooks can often cloud messages of broader importance.

Not that the band’s known for reaching across the aisle. Two years ago, when Stray From the Path released “Goodnight Alt-right” from 2017’s Only Death Is Real, the challenging quartet made no bones about its left-leaning ideology and opposition to a “racist president” and the voters who enabled him. But with the group’s follow-up album — the topically expansive and exponentially hooky Internal Atomics, out this week — the band takes a more humanist approach to confrontational subject matter.

“If we write a song about the education system in America, people in Europe or Australia or wherever can’t connect with that,” lead vocalist Drew Dijorio (aka “Drew York”) told Hard Noise. “We’re a political band, and we always will be. On our last album, we were very literal about our intentions. But we want people to be able to connect with this record more universally. You know, in a more personal way.”

With that friendly ethos in mind, the group makes a case on Internal Atomics for nonpartisan compassion. As the 32-year-old vocalist explained it, the album’s title represents the “use of personal energy to create power from within.”

“We need to change the way people are treating each other,” Dijorio continued candidly. “It goes beyond politics and all of that — it’s more of a humanitarian issue. If you look at your neighbor, a lot of people only think, ‘Is their house bigger? Is their car better? What can I do to match that?’ It’s like, no, only look in your neighbor’s bowl to see if they have enough. It starts with that mentality. Among a lot of the things that we’re saying on this record, that’s the main thing we want to push.”

And they’re saying a lot. Throughout Internal Atomics’ ten explosive tracks, there’s a ton of thematic ground covered, even with the band’s renewed mission of cross-cultural intelligibility. For example, the first song released from the album, July’s ferocious “Fortune Teller,” is a pointed appeal for Millennials and their Gen Z counterparts to step up and safeguard their future. In its refrain, when Dijorio repeats the charge for listeners to “firewalk” with him, he’s not talking about the Twin Peaks film. He’s evoking the literal act of firewalking: trudging barefoot over a bed of hot embers. It’s a rite of passage recorded in numerous cultures over the last thousand years, and the group uses it to illustrate the psychic battles facing today’s youth.

“The baby boomer mentality has fucked this planet up,” the vocalist offered in no uncertain terms. “It’s up to our generation — and the one after ours — to make sure we take this shit we’ve inherited and turn the future around. Asking people to ‘firewalk with me,’ it’s a call to people willing to take this challenge. Because we all come from that — our parents are from that generation. Especially me, my dad is fuckin’ 80. And he and I have very, very different beliefs across an entire fucking spectrum.”

To be sure, the group isn’t offering empty gestures when it comes to humanitarian involvement. Stray From the Path back up their ideas with tangible contributions. The band’s members — Dijorio, guitarist Tom Williams, bassist Anthony “Dragon Neck” Altamura and drummer Craig Reynolds — recently traveled to Kenya to put their words into action. It’s summed up like this on “Actions Not Words,” the closing Internal Atomics cut initially issued in September.

“In 2018, we took a trip to Nairobi, and we went along with the two organizations called Hardcore Help Foundation and Actions Not Words,” Dijorio explained. “We teamed up with them, and we were able to be a part of their clean water project, where we sold a bunch of T-shirts, and each shirt sold bought a water filter for one family. Each one amounted to a family having 7,000 gallons of clean water.”

The band ultimately raised enough money to provide water filters for a hundred families. In addition, the musicians helped deliver the filters where they were needed the most. Not content to leave it at that, Stray From the Path even provided one of their trademark energetic performances in the East African country.

“After playing that show in Kenya, we traveled to the village, and we helped them set up the water filters,” Dijorio remembered. “It was just fuckin’ crazy. A lot of the time, the local people spend their days there just searching for clean water, something that we take for granted. It changed our perspective on everything. And the volunteers that went with us, it was just amazing to see how selfless they are. They’ve changed their entire lives to travel to these countries to help these people.”

Acknowledging that not everyone can travel the world, the musician underscored each listener’s general responsibility. “We want people to connect to that in their own way,” Dijorio said. “To think, ‘How can I do my part? What can I do to make the world better?’”

Activism and philanthropy aren’t the only avenues explored on Internal Atomics. It also dives into much more private territory, especially on the devastating “Holding Cells for the Living Hell.” Inspired by the mental health issues faced by Dijorio’s mother, the song strikes a familiar chord for those who’ve experienced disorders such as depression, anxiety, and other psychiatric ailments, as well as those with loved ones afflicted by such illnesses.

“My mom has been in and out of mental hospitals since I was 15,” the vocalist confessed. “Just recently, she’s kind of declined in that way, and I’ve had to bring her back time and time again. That song stems from me being in a psychiatric ward, waiting to talk to the nurses and the doctors. Alone in the room, I just started writing what I was seeing.

“In the studio, Will [Putney, engineer] and the rest of my band helped me say what I really wanted to say,” the vocalist laid out. “Because it’s a very emotional, serious thing when you have a close family member who has mental health issues like depression, or whatever it may be. So I felt strongly about it, and the guys supported me. Without their help, I really couldn’t have done it. It’s a fuckin’ emotional thing to address. And I’ve been dealing with it for my whole life.”

The tune’s meaning is especially poignant, considering the circumstances surrounding Dijirio’s early exposure to live music. While Stray From the Path may today be some young person’s introduction to loud sounds or punk politics, the vocalist himself experienced a rock concert baptism via an extraordinary motherly gesture some 25 years ago.

“When I was seven years old, my mom took me to Woodstock ‘94,” Dijorio recalled. “Which was absolutely insane. Probably no mother should’ve done that. We had no tickets, she snuck me in, and I saw Green Day for the first time there. And that was it, that changed my life. I just looked up, and I was like, ‘Wow, this is what I want to do for the rest of my life.’ That was the turning point for me.”

That pivotal moment ultimately led to Dijorio joining Stray From the Path in 2005, supplanting the band’s first vocalist, a musician by the name of Ed Edge. All the same, Dijorio and founding member Williams’ history reaches back to when they “went to the same fuckin’ middle school and high school together,” Dijorio clarified. “So we met when we were like 11. But between Tom and I, college and all that shit was never an option. We just wanted to play music. We just put our heads together, and here we are.”

Fourteen years and six albums later, Stray From the Path’s vision has never been as incisive and accessible as it appears on Internal Atomics. On the aforementioned “Actions Not Words,” Dijorio snarlingly asks of the listener, “How real is your real world?” It’s a question that would scan as comical if its weight wasn’t so significant.

By way of explanation, Dijorio bluntly reiterated the hook. “How fuckin’ real is your fuckin’ world?” he pantomimed. “You may complain about certain things, but do you understand there are people that don’t eat every day? Especially in America, if you grew up in a suburban home, you probably have everything at the tip of your fingers. You have the fuckin’ world in your hand, and you still want to complain. But, like, take a step back — how real is your world? Look at yourself, and let’s not be pieces of shit anymore.”

One answer manifests as the first line of the album, the band’s most philanthropic effort folding in on itself like a Mobius strip of jarring interpersonal insight. At the start of Internal Atomics, on opening track “Ring Leader,” a lone voice begins a singular mantra that steadily builds into a boiling cognitive cacophony: “Thinking like everyone else is not really thinking.”