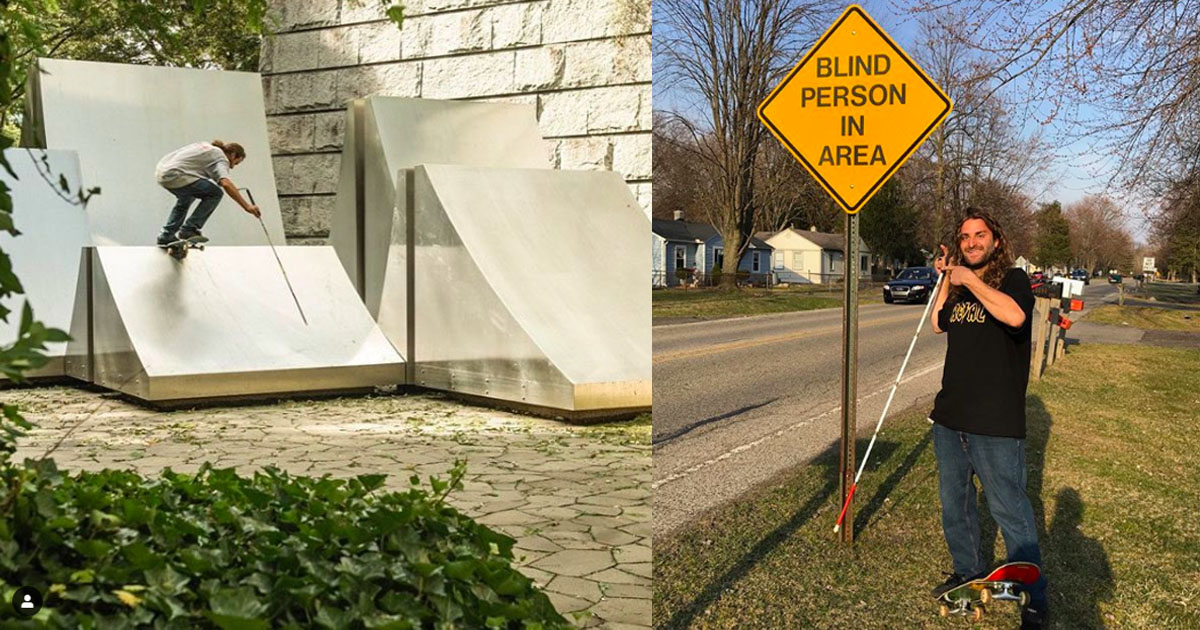 Skateboarding for All: An Interview with Blind Skater Dan Mancina

In the Detroit suburb Livonia, Michigan, a skateboarder is revolutionizing his beloved sport and challenging stigmas for the blind and disabled, all while being blind himself.

Dan Mancina didn’t lead his whole life without sight. A degenerative eye disease called Retinitis pigmentosa deteriorated his vision slowly over the course of years. There is no known cure. While he was diagnosed at 13, it wasn’t until a decade later that his sight began to waver. When the disease started to affect his vision, he noticed those around him began to treat him with pity.

“Going through my blindness, I stopped skating for a while,” recounted Mancina during a phone chat with Hard Noise. “I didn’t know that skating was something I needed to do. It’s a part of who I am, and something that I have to do.”

Sitting in this difficult emotional place made him realize that skateboarding was more than just a hobby: it was his calling. Mancina needed to be seen as someone who was capable of anything, regardless of his vision. “I know that I am the same person that I was when I was sighted as I am now, blind,” he said.

Re-learning to skate without the benefit of sight came with bumps and bruises, but it didn’t stop Mancina from climbing on the board and hitting the skatepark multiple times per week. He perfects his grinds and flips by boarding with his cane in hand, navigating the course with a deft sense of precision. Dan documents many tricks on his social media, where he also shares his life as a blind person for the benefit of the whole community.

“Changing perceptions of the blind: that’s kind of the goal with my Instagram and stuff like that,” says Mancina. “I’m always willing to try something new to push those boundaries.”

In addition to skating, Mancina fishes, shoots guns, plays darts and even told Hard Noise he’d love to go solo skydiving one day. The skater’s sense of humor informs many of his Instagram posts:

This is the fortune I got with my Chinese food #Blindfortune

Having realized the importance of skateboarding as a form of self-expression, Mancina decided to share the sport with other visually impaired and blind children across the country, and give them a chance to try it out for themselves.

“Kids who are visually impaired or blind also want the same things any other kid wants, so some of them are going to want to skateboard. It’s just about giving them that opportunity that most people think wouldn’t be possible, or wouldn’t be safe,” he said.

I am so stoked and inspired by all the kids today they all did an amazing job! Here in Calgary with @academyskateboard @ninetimes @realskateboards @adidasskateboarding

He began his project at The Ohio State School for the Blind. His single course spurred on an annual week in the school’s physical education curriculum dedicated to skateboarding. Mancina’s students consist of skateboarding fanatics who wish to continue pursuing it despite their difficulties. Fortunately, the kids Mancina teaches are provided with skateboards, shoes, and pads from his sponsors at Adidas and Real Skateboards.

Dan also teamed up with Actions Realized, a project aimed at celebrating queer and transgender skaters, to create a braille signature model skateboard which reads, “Dan Mancina is a blind skateboarder from Detroit, MI. This special braille Actions Realized board is our way of sharing Dan’s vision of building an adaptive skatepark, designed specifically for visually impaired and disabled skaters. A portion of the proceeds will be going directly to helping make it happen.”

Braille actions realized boards available now in stores and online! Part of the proceeds go to @keeppushinginc and building a skatepark designed for the skater who is VI or blind @actionsrealized @realskateboards www.actionsrealized.com link in bio

As if that weren’t enough, Mancina’s nonprofit foundation Keep Pushing Inc. is working to make the first ever accessible skatepark for the disabled. Soon after his return to skating, he realized that many skateparks don’t cater to special needs in any capacity.

“Whether you’re in a wheelchair or able-bodied, whatever kind of skater or rider you are, the park will be accessible,” he said.

Several implementations will make this park stand out in a truly radical way. Textured ground will be a major component, which guides the visually impaired to or away from certain objects like benches, ramps, rails, etc. Additionally, there will be significant color contrasts between the ground and the park objects, for those individuals who still have some remaining sight. Ramps will also be built specifically for wheelchair access. These are only a small handful of the features that Dan envisions in his fully accessible skatepark.

Time and time again, Mancina has proved that there are no limitations when it comes to doing something you love. Having taught at multiple schools and interviewed for publications like Men’s Health, Mancina’s story of hope is being shared daily, and breaking boundaries along the way. Redefining what it means to be blind in today’s world is his goal, and he is undoubtedly succeeding in shifting perspectives, four wheels at a time.