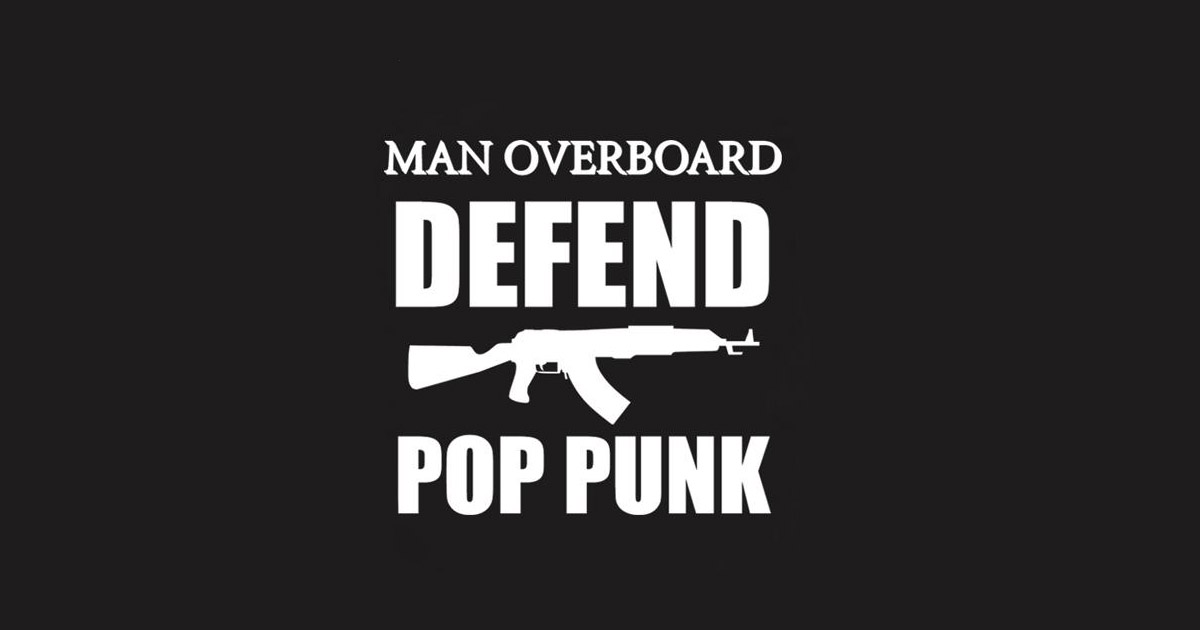 The Joke T-Shirt that Became a Genre-Defining Movement

Pop punk went through a transformation in the early 2010s. The formerly punk-turned-emo-turned-scene aesthetic of the genre landed on a combination of punk ethics, hardcore clothing, and of course, distorted guitar-driven music, featuring yelled vocals (often about a girl). While the notoriety of this brand of pop punk has simmered down in recent years, one relic from this bygone era will always be remembered: a black t-shirt bearing an AK-47 assault rifle, with the words “Defend Pop Punk.”

“Defend Pop Punk” was a rallying cry to those in the scene, and a joke to everyone else⸺including the band who popularized it.

We spoke with Justin Collier, guitarist of Man Overboard, the band who produced the shirt, and their former manager Jesse Cannon for their insight into the experience of accidentally launching a movement.

“It was supposed to be a fucking joke,” Cannon said. “The band was in on it.”

“Wayne [Wildrick] had strong punk ethics,” Cannon continued, in reference to the band’s lead guitarist, “which made him not want to sell the shirt once it got popular. If anything, we wanted to ‘defend’ pop punk from its own reputation. The punk scene was about politics, not deep-v wearing fuckboys who only care about fashion. This was about putting the spirit of punk in pop punk.”

“It was only our second design for the band,” Collier said. “Wayne came up with the idea to use this design from a New York hardcore band but change it to defend ‘Pop Punk.’ It was a joke idea that we made because we had no graphic design skill,” Collier laughed.

At the time of the shirt’s release, Man Overboard was playing local gigs and losing money on regional tours. The results were immediate and dramatic, especially for a band of their limited size.

“We ordered them at fifty shirts per clip. At first. Then they exploded in demand,” Collier explained. “More people knew the shirt than the band.” Cannon added, “At all times, there was someone working on Man Overboard merch and marketing.”

While the aesthetic of the shirt itself deserves some credit for its success, it was the mentality and emotional resonance caused by the message on the shirt, despite its humorous intent, that helped it spread so quickly.

“There was a movement around these new pop punk bands,” Collier noted, listing off bands like Man Overboard, The Wonder Years, and Transit, among others. “Man Overboard just stoked the flames.”

“Merch is a reflection of a person’s individuality. Generations of pop punk fans aged up and, guess what, it’s not cool to mock pop punk anymore,” Cannon explained. “Kids used to be embarrassed to like pop punk. But now it’s like, ‘Yeah I miss my girlfriend. Fuck you.’”

This uniquely punk rock outsider mentality falls in line with similar trends in music culture that suggest fans are more likely to support entertainers who they feel personally connected with. In an effort to bolster this sense of connection, Jesse Cannon led the formation of a message board for fans of the band, genre, and mentality to connect. This message board would eventually become the Defend Pop Punk Facebook group that today remains active with over 31 thousand members. Among a thriving social community, undiscovered bands have often posted their music over the years, including the once-unknown Neck Deep.

“The movement was bigger than just pop punk,” Collier said. “The group led to kids discovering new music, bands, and tours through the group. Without the shirt, there’s no group.”

“Without the shirt, there’s no movement,” agreed Cannon.