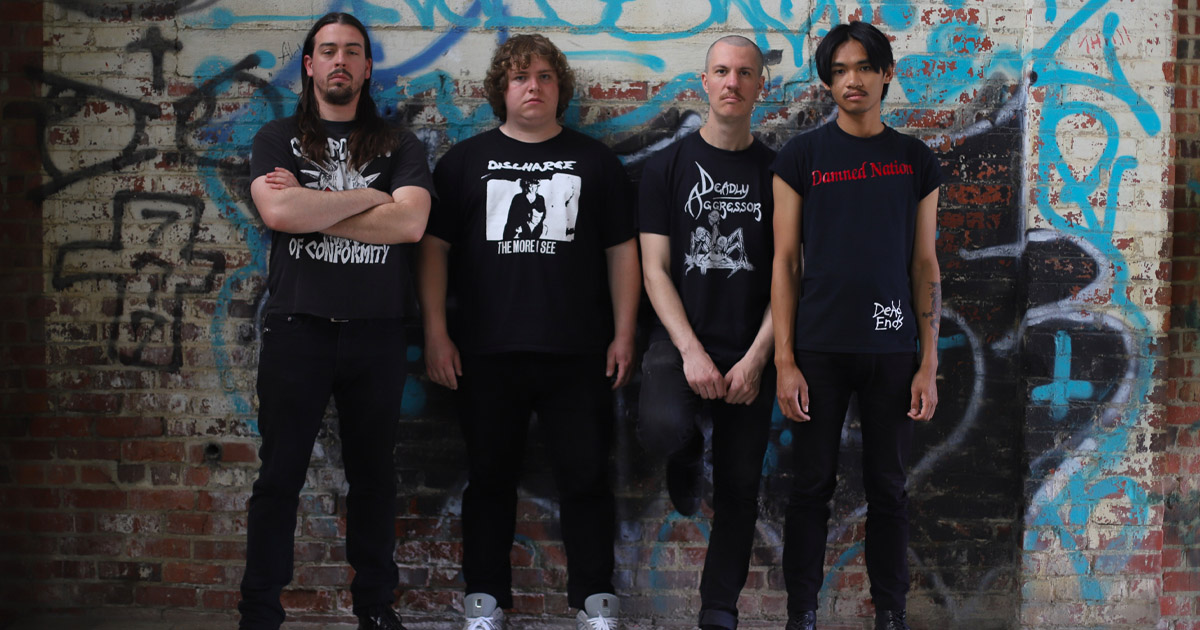 You may not know Connor Donegan by name, but there’s a high probability you know his work. Whether drumming for death metal steamroller Genocide Pact, barking vocals with straight-edge faves Protestor, back behind the kit with Line of Sight, powerviolence nihilists Brain Tourniquet or crossover killers Red Death, Connor Donegan is a staple of not only DC hardcore, but a key player in punk / hardcore at large.

Red Death welcomes their new LP and Century Media debut, Sickness Divine, on November 28th, 2019, with a tour to follow. We asked Donovan what he loves to listen to on those long drives between shows, and the answer was way more packed with jazz-fusion and prog than you might expect from someone with his musical background.

Hard Noise: Considering your public persona and what people know about your band, who is an artist you love that falls outside of what your fans might expect from you?

Connor Donegan: Mahavishnu Orchestra. I know it’s not weird to like Mahavishnu in Metal circles, but it might surprise people who know me from Red Death or my Hardcore bands.

What do you think it is that attracts you to that artist?

Pretty much everything about them is fucking cool to me. I used to think of Jazz and Fusion as a clean style of music for intellectuals, and nothing about that appealed to me. When I first heard Mahavishnu, it really broke down any mental barriers I had about Jazz and exposed me to a very raw and intense side of the genre.

I also dig the spiritual aspect of the band. I’m not religious or spiritual myself, but I can still feel their intense passion and connection to the universe through their music. Their imagery is fucking sick, too. Inner Mounting Flame and Birds Of Fire have some of the coolest album covers of all time! Last but not least… Billy Cobham’s drumming and John McLaughlin’s guitar playing are out of this fucking world!!! Listening to them riff off of each other is truly unbelievable.

It’s almost a cliché, but many guys who got into Mahavishnu started because they were heavily into mathy hardcore like Dillinger Escape Plan, Botch, etc.  Is that applicable to you?

Not those bands, but the same idea. Cynic, Atheist, and Death were the main bands that got me really interested in the more technical side of music when I was a freshman in high school. I would obsessively read any interviews with those guys and whatever bands they name-dropped I’d check out without hesitation. That’s still my favorite way to get into music! Shoutout to Paul Masvidal, Sean Reinert, and Chuck Schuldiner for helping me expand my musical palette when I was a shitty 15-year-old that only wanted to listen to Carcass and D.R.I.

What was the record that got you on board, and why?

Inner Mounting Flame was the first record of theirs I heard. I was probably 14 or 15 when I got the CD. Back then I would obsessively look at “greatest ____ albums of all time” lists and I’m sure I saw Inner Mounting Flame ranked highly on a bunch of Jazz and Fusion ones, so I checked it out. All it took was the first five seconds of “Meeting Of The Spirits” to get me hooked. I liked Jazz a little bit at the time, but I had never heard anyone play Jazz music with the ferocity of Hendrix and the chaoticness of Void. It was unbelievable to hear then, and it still blows my mind to this day.

On top of all the intense soul and feeling Mahavishnu brought to the table, hearing Billy Cobham and John McLaughlin play their respective instruments is worth the price of admission alone. Those guys are true masters of their crafts and listening to them play will NEVER get old.

What is your favorite release from that artist?

Inner Mounting Flame is still my favorite, but Birds Of Fire is fucking incredible, too. I go through phases where I listen to Birds Of Fire more, but at the end of the day I’ll always come back to Inner Mounting Flame. I’m also a big fan of the Billy Cobham solo album Spectrum, which features Mahavishnu’s Jan Hammer on keyboards. It doesn’t really sound like a Mahavishnu album, but I always jam it when I’m listening to a lot of McLaughlin and the boys.

How do you think that artist’s music is applicable to what you are doing with your current projects?

Man… Mahavishnu inspires me every time I pick up a guitar or drumsticks. While none of my bands sound even remotely like them, I always try to think of their intensity, power, and feeling when I’m on stage or in the studio. Occasionally I’ll try to throw a Billy Cobham lick into a song, but usually that ends with me dropping a stick or missing the start of the next measure [laughs].

Similarly, what are some other crucial albums to you that also fit the criteria above, and why they are special?

Billy Cobham – Spectrum: I talked about this one already but it’s worth mentioning again. This record features heavyweights like Ron Carter (Miles Davis) and Tommy Bolin (Deep Purple) supplying the foundation that allows Cobham’s drumming to go wherever it pleases. It’s not just an album for musicians, either. There are a lot of really memorable tracks with great hooks⸺kinda rare for a genre like Jazz Fusion.

Tony Williams Lifetime – Believe It: Essential Jazz Fusion for fans of Mahavishnu, Weather Report, etc. The only guitar / drum duo more deadly than McLaughlin and Cobham is Alan Holdsworth and Tony Williams! Most people probably prefer Emergency, but I heard this one first and it stuck with me the most. I recently saw a video of Chris Dave (D’Angelo’s drummer) and his band covering “Fred,” so maybe he’s with me on that one! Absolutely classic.

Frank Zappa – Hot Rats: This was the first “Fusion” record I ever heard (if you can even call it that), and it was definitely the gateway drug that would eventually lead me to Mahavishnu. Zappa’s songwriting and guitar playing on this album is unmatched. If someone were to ask me what their first Zappa experience should be, I’d start them with this. It’s got a little of everything: Rock, Jazz, Funk, Captain Beefheart… True freak music.

Cynic – Focus: An obvious Death Metal classic that was heavily influenced by Mahavishnu. When I saw Cynic in 2010 they soundchecked with “Meeting Of The Spirits” and it was so fucking cool. It’s crazy to me that these guys were in their early 20’s when they made this record. The songwriting and musicianship is insane! I know being exclusively into super primitive Death Metal is the hot thing these days, but I have a lot of respect and appreciation for records like Focus and Death’s Human that were truly unique for the time and pushed the genre forward.