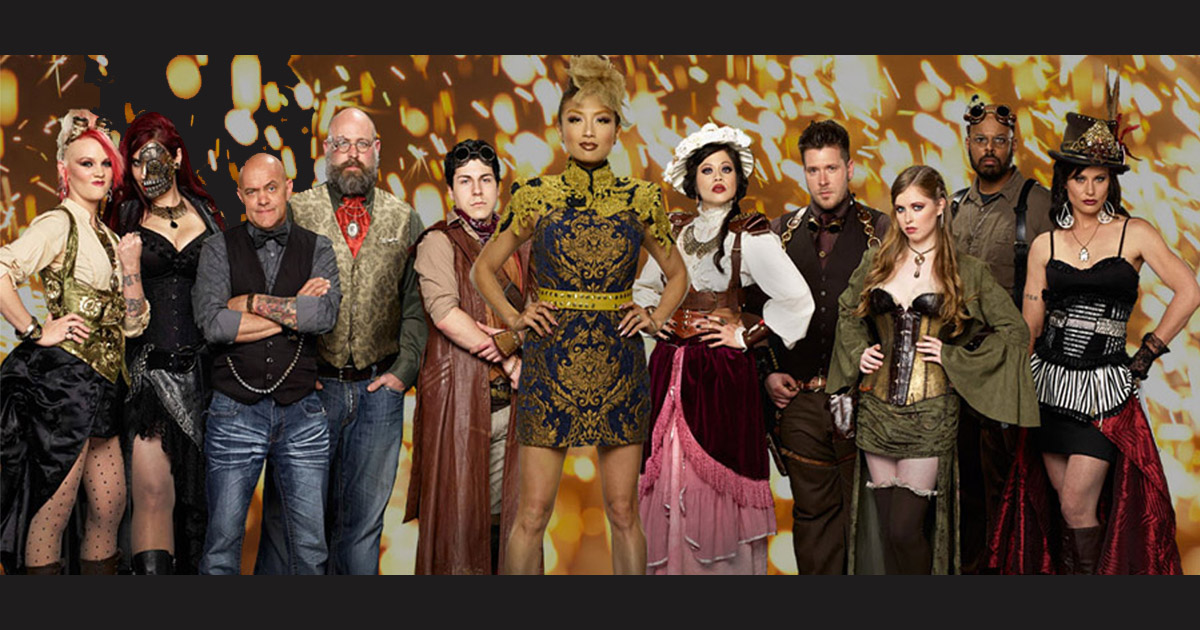 Blood, Sweat and Gears: A Reality Show About, Well, Steampunk

You know that special feeling when you’ve totally missed out on a show’s initial run, only to discover how much you love it well after the rest of the world has moved on? And now you don’t have anyone to talk to about it? Well buckle on your overly-complicated, watch-gear-encrusted waistcoat and listen up while I explain a reality show so bizarre, so niche, and so weirdly earnest that it’s still relatively unknown. The channel happened to be the Game Show Network (GSN, to those on a first name basis), and the very random hour was 9 p.m. on a Wednesday back in 2015. The show was none other than Steampunk’d.

This is not to be confused with Ashton Kutcher’s Punk’d, although here’s hoping someone along the way pitched it as a bunch of robo-dandies pranking celebrities. Steampunk’d featured contestants in a typical reality-competition setup: 10 steampunk designers competed over a few weeks to win a cash prize of $100,000; each round contained special challenges, guest judges, and eliminations. While similarly-formatted shows like Project Runway, Face Off and America’s Next Top Model reached mainstream success and continue to air, Steampunk’d lasted only one season. It had been virtually erased from collective memory until a few years ago. Bizarrely, the show landed on Netflix only to be wiped from all streaming platforms shortly after.

Before dissecting the show, we should ask: what exactly is steampunk? Merriam-Webster defines the genre as “science fiction dealing with 19th-century societies dominated by historical or imagined steam-powered technology.” This roughly translates to a real-world cosplay aesthetic featuring metallic gears, anachronistic-yet-futuristic inventions, and Rube Goldberg machines galore. Clothing is typically Victorian-era fashion with an industrial twist. An outsider will notice that many of the efforts that go into creating anything steampunk result in functional yet completely unnecessary complexity. Does a door need a pulley system with golden gears to open? Absolutely the fuck not. But is it steampunk as hell? Yes.

From its beginnings as a scifi subgenre, steampunk has maintained a steady, if humble, level of mainstream awareness thanks to video games like Bioshock, movies like Atlantis: The Lost Empire and comics like The League of Extraordinary Gentleman. But Steampunk’d was a true anomaly. Why does this show centered around a niche lifestyle get greenlit in the first place, when all you really need for a halfway successful reality show is people willing to act out on camera and clever editing? While I still can’t explain how or why it exists, my curiosity into Steampunk’d led me to consume a fascinating snapshot of an unusual subculture.

The show’s concept is simple: contestants are given weekly challenges in order to wheedle the total number count down, until one person wins the $100,000 cash prize and the title of “America’s Top Steampunk Maker.” While Tyra Banks calls her contestants “Models,” Steampunk’d uses the nomenclature “Builders” and “Makers.” Challenges involve renovating rooms of a full-sized model house to make a grand “Steampunk Mansion.” Each room is judged on the creativity, design, and functionality of its fabricated enhancements. While the overall task of creating each room is similar, the rooms differ depending on their place in the house (whether it’s a bedroom, living room or walk-in closet) as well as the stylistic mood of the lead designer on the project.

Aside from the actual competition itself (which is quite addicting to watch), the contestants are absolutely wild. One contestant, Tayliss (the name of her elven cosplay character), works as a costume designer professionally. Karianne and Charles crack awkward sexual innuendos about the size of another competitor’s feet while discussing how difficult it is to fabricate his custom steampunk boots. Ave Rose throws attention-seeking temper tantrums when judges don’t specifically compliment her leather bodices and devil horn headpieces. Miss Morgan is the prototypical reality shit-starter: she picks fights with all contestants and proudly boasts her discerning eye for steampunk while declaring that the others’ inferior skill stifles her creativity. Imagine Omarosa wearing a 19th-century lampshade. You can’t look away.

A central source of conflict is the relationship between “Makers” Steampunk Eddie and Josh. Both contestants are construction experts and lead the pack in terms of stylistic creativity and craftsmanship. Their professional levels of steampunk expertise make them natural competitors, and it’s painfully entertaining to watch them swap insults. And at some point, Kirsten Vangsness from Criminal Minds is a guest judge. I wish I could make this stuff up.

I’ve learned much from Steampunk’d. It taught me there’s beauty in putting arbitrary moving mechanisms on articles of clothing I’ll never get to wear, why constantly wearing goggles is a weirdly practical idea, and how hot glue is a cheap answer to everything. But it can be genuinely inspiring to watch people devote so much time, energy, and emotion into non-traditional aesthetic choices. Their passion is palpable and infectious.

Despite the lack of clarity in the Steampunk’d mystery (why does this exist? exactly who asked for it?) something became obvious: incredibly niche reality tv is a genre in itself. It seems like every production company has had a few one-offs that seemingly appeal to very few. Some of these have gone on to create cult fandoms that outlast the show itself. Pink Sneakers Productions has apparently figured this formula out, as they created shows such as MTV’s I Want a Famous Face (people getting plastic surgery to look like their favorite celebrities), CMT’s Redneck Intervention / Redneck Rehab (family members confronting city slickers about returning to their country roots) and Oxygen’s Fix My Choir, which is exactly what it sounds like.

While the lore of the “Makers” in Steampunk’d is unusual, the legacy of it and other hyper-specific reality challenge shows are still being written.