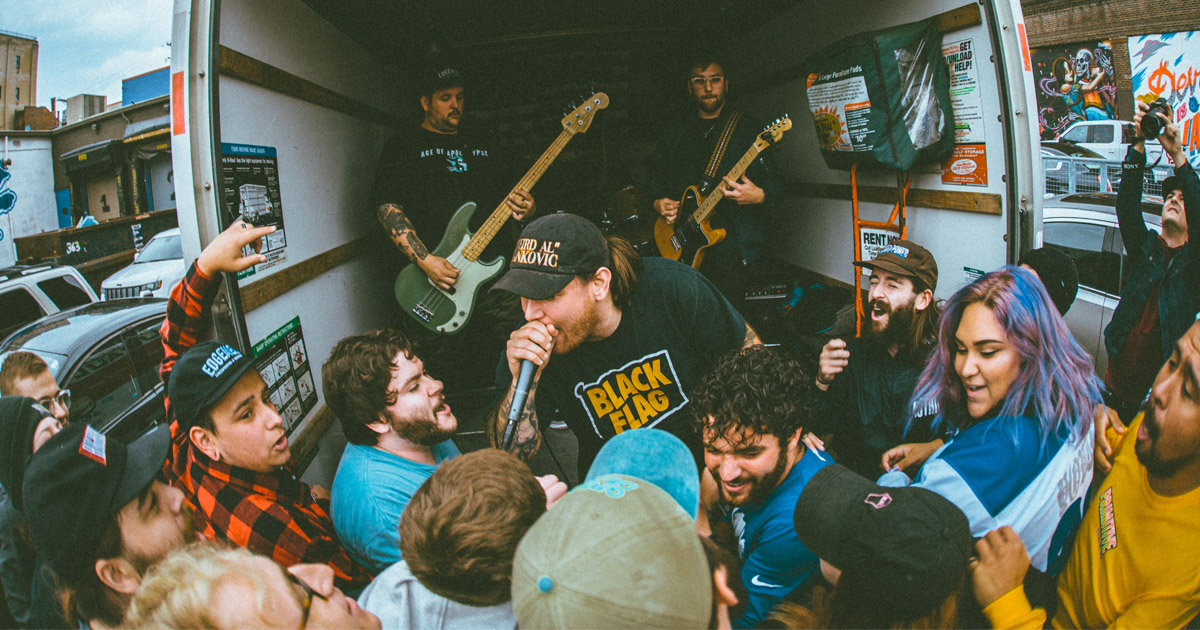 Interview: Strange Magic is Putting the Detroit in DIY

Fortunately, it’s as real as the music contained within. After getting fans and friends hyped with the fake signing, the band tweeted a faux text conversation between vocalist Mike Moynihan and label head honcho Fat Mike. The NOFX frontman was actually drummer Jon Lebiecki, who said they were pushing the release back because the band had leaked their own album again.

So it turns out that working with your favorite childhood record label is absolute dogshit. Fuck @fat_wreck and fuck @FatMike_of_NOFX.

Unfortunately comes out tomorrow because we won’t be told how to run our band by a bunch of washed up has-beens pic.twitter.com/giM8cKUM9D

The exchange ended with Moynihan putting his foot down and saying, “If you’re gonna be a baby about shit that happened once and was an accident, then we can just put it out ourselves. Eat shit.”

That’s exactly what they did (self-release, not eat shit, that is), with Unfortunately arriving online the following day, August 30, boosted by an avalanche of support. Moynihan remembers how hilarious the band thought it was to see people they didn’t know boosting them and hating on the label.

Though most might worry such a stunt would invite more extreme backlash, Strange Magic lived up to the first word of their name and invited it.

“We were hoping for it because we are here to annoy,” states Moynihan. “We figured worst-case scenario Fat Wreck would send us a cease and desist, and I would send back a polaroid of my balls that said, ‘Cease and desist deez nuts,’ and then we could use the cease and desist for the cover of the next 7”, which would be fucking awesome. Best-case scenario, one of them hits us up and is like, ‘You guys are fucking idiots; we’ll put out the record.’ But we got the most middle ground response we could have gotten, which is absolutely no response at all.”

The label has continued that stance, also refusing to comment for this piece. We’re hoping they break their silence via a statement on social media; thanks in advance for the clicks!

Fortunately for Moynihan, the simple pleasure came from the fact that the label had to have seen this flurry of activity.

“They HAVE to know, which is enough for me to feel happy, to know that someone in that office was fucking annoyed.”

Annoying was also their goal when they planned to do some free, guerilla-style shows around the album’s release, thinking up a gig outside of Detroit’s big Irish bar on St. Patrick’s Day or one at the city’s Eastern Market on a bustling Saturday.

They ended up heading to the latter with gear ready to play in the back of a U-Haul truck. They had to settle for a Sunday due to scheduling, but their disappointment turned to excitement when they arrived and had to move to a nearby loading dock because the market was crammed with tailgaters for the Detroit Lions game. Moynihan estimates they were greeted by 70-80 willing viewers after the truck’s door went up and he rhetorically asked, “What’s up, you fucking idiots?”

Footage from the September 29 show went even more viral than the Fat Wreck stunt that happened exactly a month prior. However, that wasn’t part of the plan; the collective simply wanted to play a gig.

“We wanted to do the U-Haul show because we didn’t have any shows coming up and we like playing music. I was like, I’m not going to wait for a show, fuck that. Let’s just play and let’s play in front of people. We know there are going to be people there, so we’re going to play in front of you whether you like it or not. Fuck you!”

A similar desire to play inspired their set at their local House of Vans showcase back in January, which they secured before any music was out simply by asking. It was headlined by Danny Brown, Joyce Manor, Protomartyr and Thundercat. When the shoe company offered them $500 to play, Moynihan thought, “Dude, we don’t need $500. That’s fucking stupid.” They took $200 out in singles (one-dollar bills), put $40 each in a Minions and a Ninja Turtles piñata, then threw the remaining $120 in the crowd in bundles of $20.

Between playing a free show and giving away money they were paid, it’s clear the band don’t worry much about their wallet. If you haven’t caught on yet, they don’t worry about much. The members decided early on that this would be the project for which they don’t try; Moynihan even wrote the lyrics to all the songs ten minutes before their first show. This letting go was no doubt freeing after years and years of trying to “make it”— Moynihan in post-metallic hardcore astronauts Hollow Earth and the Lebiecki twins, guitarist Mark and drummer Jon, in off-kilter “piss rock” crew Undesirable People. Bassist Jimmy Lawson also did some time in BBB Records hardcore crew Freedom.

Their goals are simple. First is a musical one, helped along by their collective years of experience playing, which Moynihan suggests enables them to make music that will “at least be pretty sick” in spite of their laissez-fair attitude.

“We just wanted to do something that felt like a hardcore version of skate punk, and we wanted to approach everything with that attitude because that’s just kind of who all of us are. I think the years of being a shitty asshole and listening to The Vandals and the older Offspring records are just a part of our personality at this point, so it worked out to be exactly what we wanted it to be.”

Another, deeper goal came from that punk part of their personalities and adds some context to their propensity to annoy.

“Regardless of what you’re saying, I think that punk is about challenging people. I think that when I first heard punk, I was challenged to keep up with the actual music, and I had my ideals and my thoughts challenged, and that’s all I want to do. I want people to, more than anything, have fun, but I do think the heart of punk is expression at the cost of other people’s comfort.”

That even includes the comfort of punks, the spirit of which Moynihan thinks has moved to another group of outsiders with brightly colored hair: SoundCloud rappers. He sees an attitude kinship in their unwillingness to let anyone stop them. They’re writing their own music and lyrics, recording and releasing the finished product themselves, and putting on shows just to play. Sound familiar?

Though gatekeepers would say those kids aren’t punk because of sound alone, Moynihan suggests they’d say the same of his own band because they don’t sound like Dead Kennedys. Those are the type of people who’ve been crying the same message since the ‘90s punk explosion, which was incredibly formative for the members of Strange Magic.

“I think, more than anything, it was a window into a subculture,” says Moynihan of the staggering popularity of bands like Rancid, NOFX and Less Than Jake at the time. “Hearing Rage Against the Machine and learning that bands could be political on the radio was fucking crazy. Not that I gave a shit about politics when I was 8 years old, but knowing that it pissed my dad off when it was played was enough for me to know that I liked it.”

The difference between subculture then and now was that people were more likely to dig back then. Back then, hearing a Rage Against the Machine song on the radio could lead someone to Zack de la Rocha’s previous hardcore project Inside Out and the politics that inspired both bands. Sure, it’s easier to do that dive these days thanks to streaming and the internet in general, but Moynihan opines people don’t like to scrounge for things as much anymore.

“I think we live in the age of the algorithm, and I think that everybody is constantly shown what is tailored for them through their Google searches and their Instagram likes, and I think that a lot of what punk is to me has been lost in that.”

A huge tenet of punk—and subculture as a whole—includes a sense of community, and that community should extend to all ages. Moynihan spends a good amount of time on tour (this interview was conducted while on the road with Pure Noise masters of chaos Chamber) and has noticed a diminishing number of young kids playing in bands. He started playing in punk and hardcore bands at 11 or 12 and wants that to continue, so he’s invited any bands comprised of members under 25 in Michigan or neighboring Toledo, Ohio to come record with him for free. He’s learning as he goes, but has a bit of help from close friend Greg Thomas of Silver Bullet Studios. 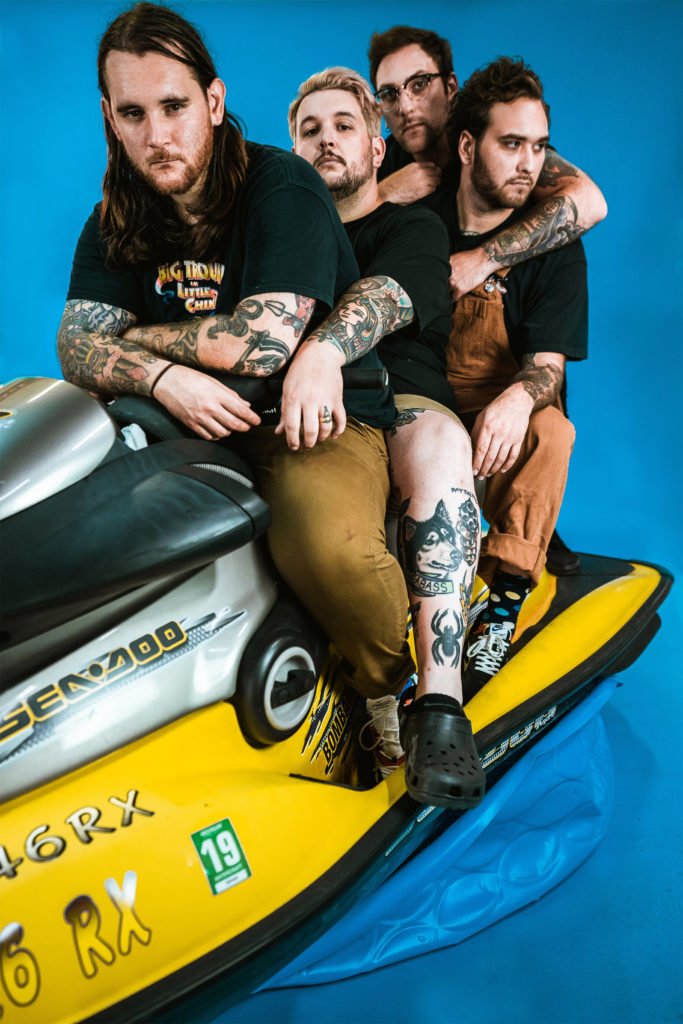 “I don’t want hardcore and punk to be 21+. I think that fucking sucks,” says the budding engineer, who will also mix the demos. “If you are willing to put the time in to write some songs with your friends, I don’t care if you suck. I don’t care if the songs are bad. Be pissed off and say something, and I will help you in the way that I can.”

That includes releasing music through Magic Club Records, a new label whose first releases will be Unfortunately on a single-sided 12” record (available for pre-order now) and tapes for the first recording project Moynihan took on: local wrestling-themed hardcore band Spine Buster’s Pipe Bomb demo. Future releases could include other acts he works with —he recorded Ohio death metallers Entrenched right before heading out on tour and will start fellow Toledo hardcore act Cherry when that project is complete —though he’s open to music beyond his preferred musical styles.

Moynihan describes the Detroit punk and hardcore scene as fractured. He knew about half the attendees to their U-Haul show. However, it seems like his exercise in community building is working. Spine Buster’s vocalist connected him with a group of 16- and 17-year-old kids from nearby Monroe, MI (about half-way between Detroit and Toledo), who wanted to start a band and were hoping Moynihan would work some of his Strange studio Magic.

Unfortunately narrator Gilbert Gottfried kicks the album off by asking, “Strange Magic? Who the fuck is Strange Magic?” The question was essentially rhetorical for the actor, given the band hired him via CAMEO, a service that allows you to hire celebrities for personalized shout outs. The band had considered Pauly Shore and Jon Lovitz for the honor but settled on Gottfried due to him having such a recognizable voice.

And for anyone worried that it ain’t punk to pay $150 to have the voice of Aladdin’s Iago parrot something written for him, the band used the clip on the album in spite of the terms of service, which specify usage must be non-commercial and non-promotional, and with zero regard for any potential legal action that could follow.

“Literally, he would never sue us. Who cares? Even if he did, shout out to Gilbert Gottfried, but fuck you, nerd, if you try to come at me.”