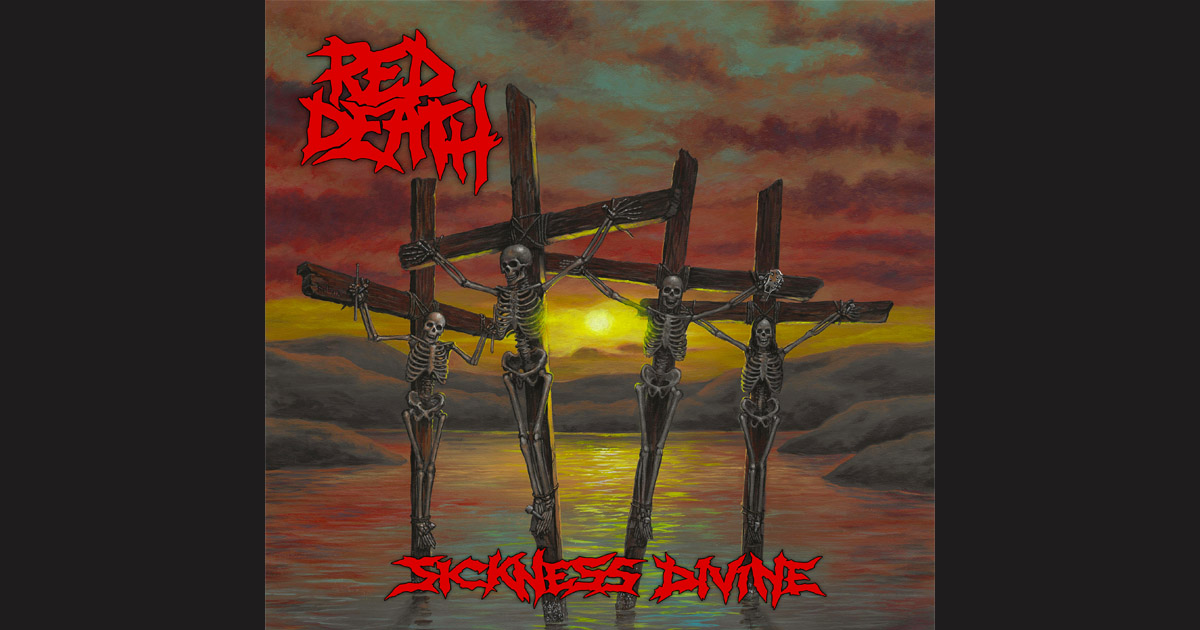 I remember it like it was yesterday. Way back in that oh-so innocent time we now call the ’80s, I was a young whippersnapper high on the fumes of the Hardcore Punk scene and fresh off a Jersey Shore vacation with my parents, looking forward to coming home to check out what records my older and more clued-in brother had purchased while I was away. Running up the stairs and swinging his bedroom door open, I was utterly confused by what I saw. Instead of record covers with images of Ronald Reagan hanging from a noose or some short-haired skater pulling off a rad trick, these had minotaurs brandishing swords and heshers banging their heads like they were trying to shake off dandruff.

It seemed in the two weeks I spent on the Wildwood Beach boardwalk riding roller coasters and eating cotton candy, a crossover between Hardcore punk and Heavy Metal had begun with bands like Corrosion Of Conformity, Slayer, D.R.I and Anthrax leading the charge to unite the two undergrounds. At the time, I wasn’t too excited by this prospect, but in the rearview it’s obvious this was a much-needed merger to push both genres into uncharted musical territories.

Washington D.C.’s Red Death find themselves deep within a renaissance of the Crossover sound, alongside bands such as Houston’s Power Trip, Helsinki’s Foreseen and Richmond’s Municipal Waste. Their third full-length Sickness Divine (out November 29th from Century Media) builds upon their interpretation of the classic Crossover sound by grafting on brooding acoustic elements which provide a majestic sweep lacking from their sound until now.

I recently sat down with Red Death’s lead vocalist and bass player Chad Troncale to find out what informed these changes, and ended up finding out about his love for Metallica’s Ride The Lightning, The Last Jedi, and peace punk pioneers Crucifix.

HARD NOISE: Upon my first few listens to Sickness Divine, I’d say it’s got a very mature sound when compared to your previous efforts.

CHAD TRONCALE: Oh yes, that was definitely a conscious effort. We took the “go big or go home” approach musically this time around, and felt we couldn’t half-ass this one at all.  Formidable Darkness was a great sophomore follow-up, and that’s fine since I feel like most bands have failed with that task. With us though, I think each record gets better and better. It’s a tricky task to one-up yourself.

How do you think Sickness Divine compares to the albums that proceed it?

It’s a bit more fine-tuned than our previous stuff for sure, with the screws being tightened up more so than before. The drums are more controlled yet wilder at the same time, and the guitars are more vicious than usual. Same with the vocals. Man,  I pretty much hate my vocals on everything we’ve done except Sickness Divine. Those are the differences I notice. It’s not like I think the first two LP’s are weak,  because they aren’t. It’s just that they aren’t as strong as Sickness Divine to me. This record is ripped as fuck, straight up!

Originally, you were just the front man for the band, but you recently took up bass duties as well. Why the move to bass?

I had no other choice! (Laughs) We were one week into an almost six week tour and our bassist just flat out told us he was over it, so we let him go. There was no need for a hostage situation. So what choice did we have? We were playing a sold-out gig in Brooklyn that night with the capacity being something like 700 or 800 people. We couldn’t just pass that up. I decided to do it myself. I had never sang and played at the same time on a stage ever. I figured if I go up there and do it,  it’ll either be badass as fuck or I’m gonna have to reconfigure my life when I get home. Luckily I didn’t have to do the latter. 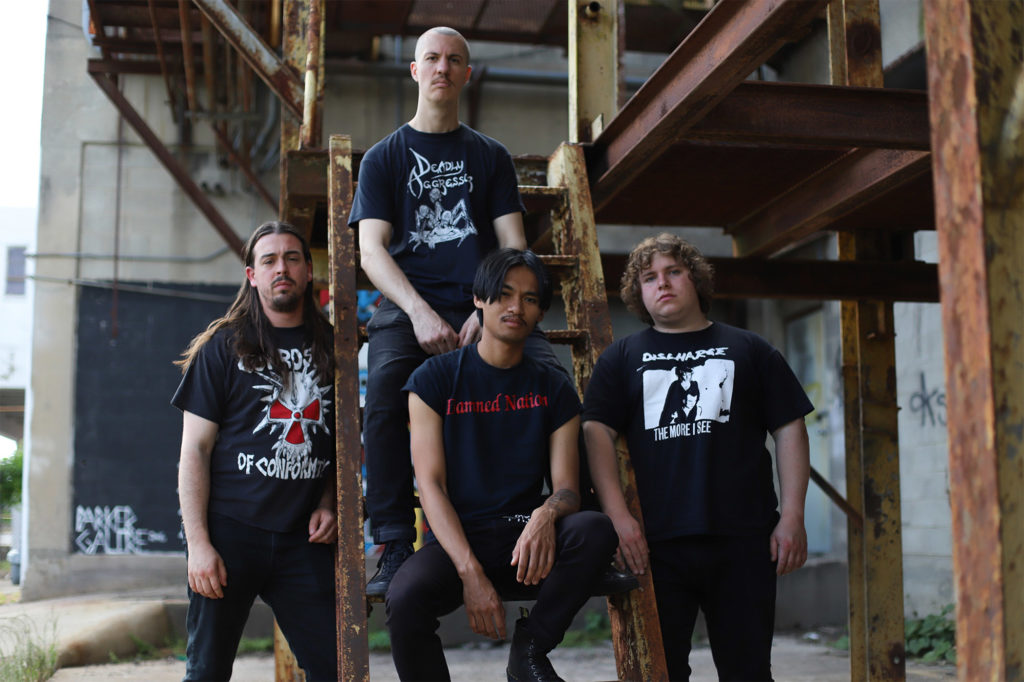 What do you think this switch to both bass and vocals adds to the band? Do you think it plays a factor in this new, more fine-tuned sound you all have on Sickness Divine?

I think it makes us sound more dangerous, and I fucking love that. It absolutely helps define the sound of the new record. A dangerous lead guitar along with a dangerous bass guitar is just what the doctor ordered.

The album has a good amount of acoustic elements on it including the title track as well as the songs “Refuse To Be Bound By Chains” and “The Anvil’s Ring.” What was the influence for these songs?

I can’t say what the influence was for “Refused To Be Bound By Chains” because I didn’t partake in its writing process. But for the title track and “The Anvil’s Ring,” it was absolutely classical music. I miss how Metallica, Mercyful Fate and the Randy Rhoads era of Ozzy  perfectly blended heavy music and classical. I’ve been listening to Wendy Carlos’ Switched On Bach like crazy for the past seven years, so It was bound to come out once I picked the bass up. I’ve been writing shit like“The Anvil’s Ring” since 2011. I’ve just never given any of it to a band or properly recorded it. I call them my little bass sonatas. That sort of thing is more relevant to my interests than ever.

Is there anything outside of the world of music that inspired Sickness Divine?

Films for sure. Stuff I had never seen before. The Last Jedi came out like two weeks after the last record did and it blew my mind. I know people like to hate The Last Jedi but not me. I love it! I will stand and die gladly for that belief. Rian Johnson was a huge inspiration for me this time around; one of the biggest, honestly. His ability to make something look retro yet do something so weird and new with it is awesome. He did that with his film Looper as well. A great movie that was super unique yet familiar.

Now, I’m obviously not trying to mimic anyone. I’m just trying to further something in my own unique way. Rian Johnson perfectly did that and it inspires me big time. The cover art for Sickness Divine was actually inspired by a shot from his first movie Brick. How do I get Sickness Divine in Rian Johnson’s headphones?

I’d say friends in high places or large amounts of cash; two things I can’t help you in attaining.

(Laughs) I could go on for days about how films inspire me. Seeing Dunkirk in IMAX blew my damn mind. It was so suspenseful and dark, but with a bit of optimism to it. The vibe of there being a little light at the end of the tunnel really inspires me. Samurai movies have always been a big thing with me as well. Three Outlaw Samurai will forever inspire me and Sakon Shiba is just so relatable.

How would you say the recording process of Sickness Devine differed from the previous albums?

Instead of recording for a week in a row, we did it in blocks. I’ve never done it like that before and it was very interesting. Me doing bass this time around obviously changed some things too, but other than that,  not much was different. Maybe I smoked a lot more this time, but other than that it was pretty similar to last time, honestly.

In the past few years, Thrash Metal bands like Red Death, Power Trip and Foreseen have gained a lot of popularity. What do you think it is about these bands and the resurgence in this musical style that makes it stick out from similar bands from the past?

I think it comes from all those bands’ having a background in punk originally, and that’s the edge we have over most of the younger Thrash Metal bands coming up, too. They don’t have that Discharge vibe like us or Power Trip. I don’t think young thrashers listen to Dehumanization by Crucifix more than we do. I could be wrong, but that’s my guess.

I think the Thrash Metal thing has been lacking that dangerous punk rock backbone. People have been missing that energy, and now you have bands like Power Trip doing the damn thing. Doing Crossover with D-Beats. All the best crossover bands have that element, in my opinion.

I didn’t know you were into Hardcore Punk before Heavy Metal. I just assumed you went the Hesher to Hardcore route due to the sound of the band.

No, I didn’t get into any Metal at all until about eleven years ago. I liked Motörhead’s Ace Of Spades a lot when I was a kid, but I was just into Punk and Rap before I got into Hardcore. The Cro-Mags got me into Metal, honestly, and that led me into wanting to peep out Darkthrone and Pantera tracks on MySpace music. I had heard Metallica songs like “Nothing Else Matters” and “Enter Sandman” as a kid but it never clicked. It wasn’t until I heard Ride The Lightning that anything by that band clicked with me. That record blows my mind every single time I listen to it. Since then, I haven’t looked back in regards to Metal.

Seeing as your previous efforts have been on smaller independent labels like Triple B and Grave Mistake and Sickness Divine is on the Sony Music-backed imprint Century Media, did you get any blowback from the more stringent DIY elements of the punk scene?

No blowback at all. I don’t think people care about that sort of thing anymore. It’s not like we are Green Day huge and a club like Gilman Street wants nothing to do with us anymore. We aren’t that big by any means, and don’t come from an extremely judgmental scene. Everyone in D.C. has been pretty supportive of the move, which is cool. So far, I’ve done three interviews today alone! That is definitely different from before, when a record would come out and I had to go fishing for press myself and damn near nobody bit. But it is what it is. I can’t complain. We are here now, and that’s what matters.