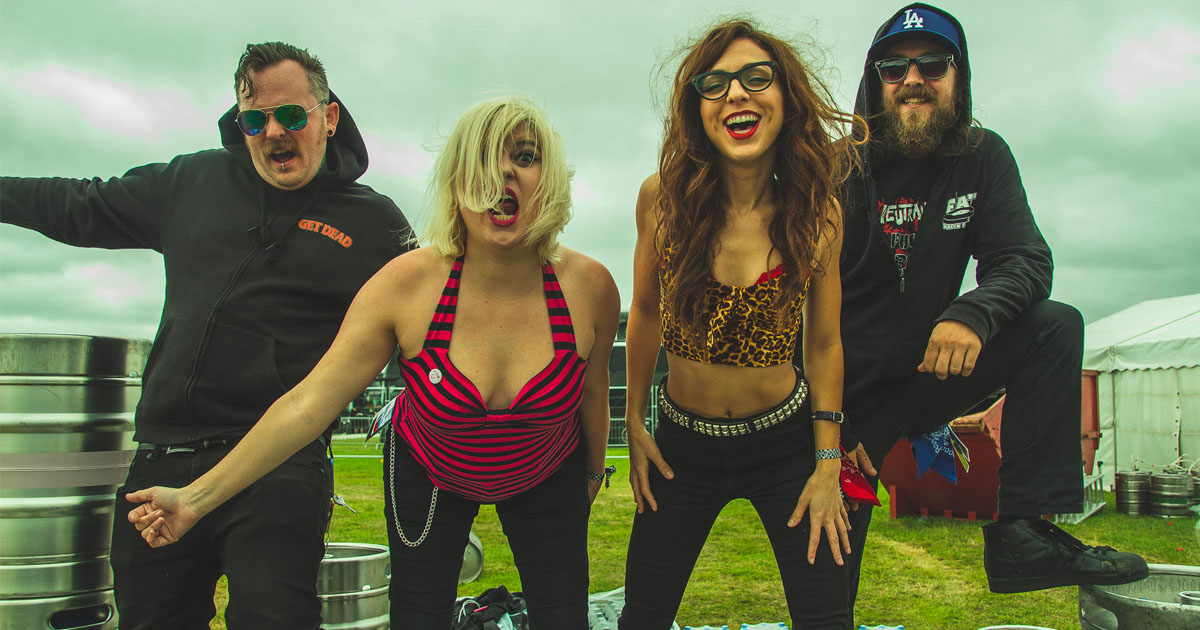 If you’re like me and hear the word diabetes, the first thought to appear in your pop culture-infected brain is the Liberty Medical commercial featuring Wilford Brimley. I can vividly recall his fluffy mustache, the exaggerated way he pronounces “diabeetus” and spliced in footage of horses galloping about. To be completely honest, I never really knew what diabetes entailed, and that commercial didn’t do me any favors. Then I met Poli van Dam, guitarist and vocalist of The Bombpops and globetrotting punk rocker with type 1 diabetes.

So what is the difference between type 1 and type 2 diabetes? In simple terms, those with type 1 can’t produce insulin and have to inject it regularly. Those with type 2 can produce insulin, but have an insulin resistance. Type 2 is more common and can be preventable with healthy lifestyle changes. But there is no cure for type 1 diabetes, and the price of insulin in the US continues to skyrocket. Rationing insulin supplies to save money continues to contribute to the death toll of Americans with diabetes, and it’s estimated by 2030 up to 40 million people will be without insulin due to a massive shortage

“Type 1 is insulin-dependent,” says van Dam. “The pancreas that produces insulin in your body to keep you regular when you eat? That totally shuts down. So you have to give yourself insulin with the shots. You’re doing shots everyday, I mean multiple times a day. Then you’re checking your blood sugar to make sure you’re in the correct zone.”

Poli van Dam and co-frontwoman, Jen Razavi, started The Bombpops in 2007, around the time she was first given her diagnosis after a family RV trip where she felt the first signs of type 1 diabetes: extreme thirst, frequent urination, unintended weight loss and irritability.

“We were on a family vacation and in this giant RV. I’m super thirsty, just chugging Diet Coke all day and irritable, and my mom’s like, ‘Are you pregnant?’ I’m just sleeping the whole time. I was down to ninety one pounds. It’s just funny because my dad had been diabetic and my brother was diabetic. You think they would’ve known the signs.”

When the family got back from vacation, Poli continued complaining how thirsty she was until her mother finally had her check her blood levels. Using her father’s meter and getting immediate results, her blood sugar was around 500 mg/dL (milligrams per deciliter) when an average would be less than 100 mg/dL before eating and under 140 mg/dL after eating. She went to the doctor the following day.

“You go your whole life without having to worry about that stuff,” she says. “Then you leave the doctor with insulin shots, and that becomes your life.”

The life of a traveling musician is tough enough when it comes to keeping a routine. Each day consists of long stints sitting in a van, greasy truck stop cuisine, not knowing if you’re ending up at a modern venue with a green room or a punk squat with a half-operational restroom. Dealing with a medical condition adds extra stress to the already uncomfortable lifestyle, and with type 1 you must stick to your schedule; your life depends on it.

“In the morning when I wake up I do what’s called long-lasting insulin,” van Dam explains. “It’s a bigger shot and bigger dose that slowly drips insulin into your body over twenty four hours. I do that every morning. I check my blood sugar and if it’s a little bit high I’ll do a shot for that. The shots can range from three to six a day on average. I do it every time I eat, unless my blood sugar is low and I’m having a no carb meal.”

If there’s an emergency on tour or overnight, the insulin (both the long-lasting and short-acting types) and continuous glucose monitor (CGM), which has an app that can alert friends and family of van Dam’s blood sugar levels, are a great way to avoid disaster. However, emergencies can still happen in the middle of the day, even when you’re surrounded by your tourmates.

“A year ago we were on tour with Strung Out. I’ve been diabetic for twelve years at this point and never had any complications with low blood sugar emergencies, you know? I had a CGM that was reading just fine,” van Dam tells me. “We were somewhere in Utah and I went into the bathroom and took a shit. Then I stood up from the toilet and was like, ‘Whoa, my blood sugar is really low.’ I didn’t know if I had done too much insulin for breakfast, or if I accidentally switched my long-lasting with my short-lasting insulin in a bigger amount. It’s a common mistake.”

van Dam came out of the bathroom panicked, and ran into her tour manager, Luke, who has a diabetic wife and fortunately carried around an emergency glucagon pen in his backpack. Glucagon is a hormone that makes the liver release stored glucose and quickly raises blood sugar levels.

“He felt me and I was covered in sweat, so I tried to drink the quickest thing I could get, which was orange juice or soda and anything like that, but I couldn’t keep anything down. The second it came back up, I knew I was about to have a seizure. The last thing I remember was Luke sitting me on a bench in the Denny’s attached to the truck stop. Ten minutes later I woke up on the ground of this gas station and was like, ‘What the fuck?’”

Luke injected the glucagon pen into van Dam, which bought them enough time for the paramedics to get to the scene.

“He had to put me on the ground because my eyes were rolling back in my head and I couldn’t stop throwing up. It was the end of the tour so I went to the hospital and they did all of these tests on me, and thankfully I was fine. We missed our show in Vegas that night and we got to the hotel and he told me I should fly home. I don’t even know why I was trying to stick it out. The next day I could not move my body because it was so tensed up. My whole tongue was torn up, the front of my neck couldn’t move, and that was a big wake up call for me to start taking care of myself and cut back on the partying.”

The pressures of the music industry can make you believe that a show is more important than your health, and sometimes your life. But van Dam took this as a major warning to sober up enough to focus on her condition, use her platform to spread awareness, and share vital information about the disease.

With a condition like type 1 diabetes, it’s still possible to enjoy and indulge when it comes to eating and drinking, if you’re being smart and safe about it.

“The common misconception is that you can’t have certain things or have sugar,” van Dam explains, “but if I want to have some of my kid’s Halloween candy, I look at how many carbs are on the back—you do carbs, not sugar, because carbs turn into sugar—then I just dose that amount. I can eat whatever. If the band is going out to eat, it’s fine, it’s not a super restricted diet.”

The rampant misinformation about the types of diabetes also leads to some undesirable, uncomfortable, and unnecessary questions from the average person. Those under the umbrella of the uninformed, well-meaning or not, frequently have some kind of opinion without information to back it up.

“‘Oh, you’re diabetic? Did you used to be super fat?’ I’d have to explain it all the time,” van Dam says. “My whole life, my dad never talked about it or told his friends. It was always so secret. I still feel that way, sometimes; I just want to go to the side and take my insulin. I’ll shoot up in a restaurant or whatever, so I’d go to the bathroom because I don’t want people asking about it.”

THE HIGHS AND LOWS

Finding the blood sugar sweet spot is a bit of a balancing act for diabetics. Everything from when you eat to when you perform on stage can drastically change your levels, and it’s important to notice trends and learn from them to make life a bit easier.

“Sometimes there’s lows right before you go on stage,” van Dam tells me. “When you’re low you feel really shaky, like you’re kind of dying. You can feel your body getting weak and it takes so long to get your levels back up. Once in a while I’d take a glucose tablet or drink orange juice. I always have orange juice backstage. Then you’d overcompensate because you’d rather be high than low. High is bad over time, but low is more scary.

“I’d go on stage with all of the adrenaline, then I’d come off stage and feel so shitty, when I should be stoked and excited. It’s that constant rollercoaster. Then I do an insulin shot and it goes back down. It does affect your mood. Touring is hard enough because you’re tired and grumpy, then you have to add that on top.”

Having high blood sugar levels, like van Dam mentioned in the RV story earlier, makes you feel the signs of being super thirsty, having to pee, and feeling really tired and irritable. Over a long period, that’s what messes up people’s circulation, blood pressure, their heart, and even eyes. People can actually go blind due to diabetes-related retinopathy. When blood sugar gets low is when it’s more dangerous; that can lead to a seizure or even a coma.

It might be hard, but being outspoken about diabetes is a very good thing. Inform those around you about your condition, what could potentially happen, and equip them with tools and knowledge that can potentially save your life.

van Dam specifically shouts out You’re Just My Type, a photo project by Laura Pavlakovich, “a type 1 diabetic who, through photography, sets out to share other diabetics’ stories, break down stigmas, spread awareness, and put a face to this invisible disease.”

In addition to understanding from your friends, family, and bandmates, physical products like insulin shots, a glucagon pen, and a CGM are there to help you. It’s not the same as remembering to wear a retainer at night, because even at your laziest or most uncomfortable while touring (which, believe me, I understand), these items are made to save your life and can’t be left behind.

van Dam also recommends the mySugr app, which she describes as “a reliable companion to monitor and manage your diabetes right on your smartphone.”

Beyond that, getting vocal about diabetes helps others do the same thing, continuing the spread of knowledge and awareness, and potentially saving lives.

With a newfound activism and awareness, Poli van Dam penned The Bombpops’s first song about dealing with diabetes. You can hear it on their new album coming out sometime next year.