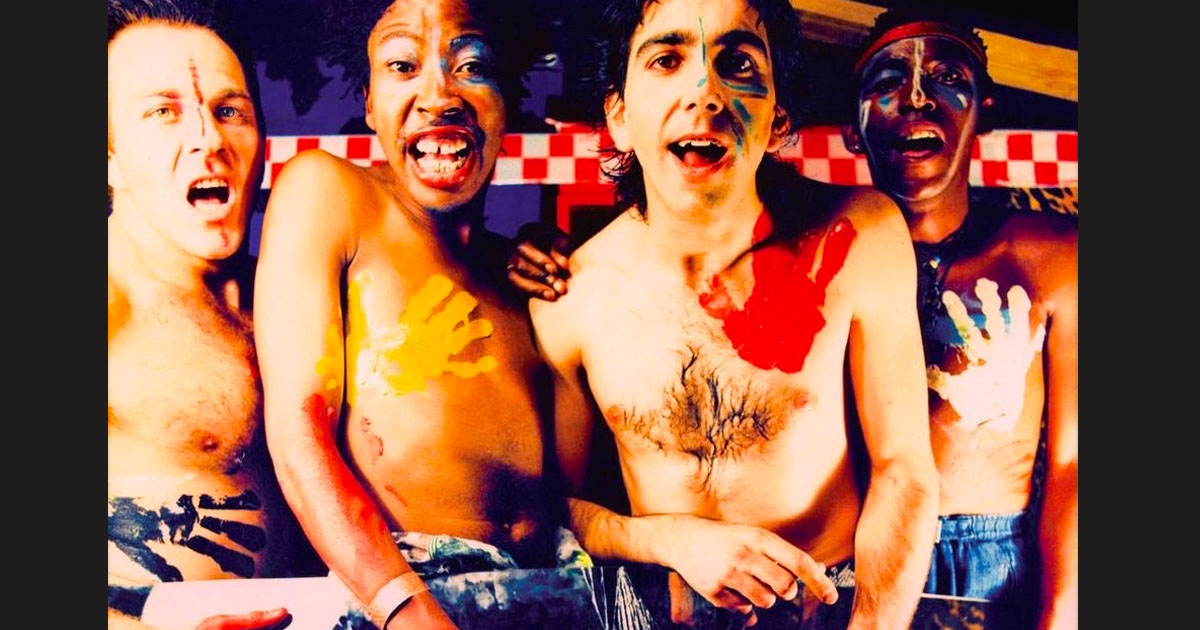 Everyone seems to agree that National Wake were the best and most authentic South African punk rock band, a group who strived to eradicate apartheid through the infectious funk-laced rock of their mixed-race collective. Unfortunately, they couldn’t thwart harsh political reality and steep public disinterest. National Wake broke up after just a handful of years and only one album, a self-titled LP released in 1981 that didn’t sell beyond the hundreds and was withdrawn after pressure from the government.

Core guitarist Ivan Kadey left Johannesburg for San Francisco in the late ‘80s as the situation in his homeland grew dimmer. National Wake became a faded memory, one made all the more bittersweet by the untimely passing of rhythm players Gary and Punka Khoza (bass and drums, respectively). History ignored this revolutionary unit until about 2012. That was the year National Wake was featured in the documentary Punk in Africa. In 2013, Light in The Attic Records issued the excellent two-disc National Wake retrospective Walk in Africa 1979-81. Now there’s a full documentary in the works about the band as well as a potential feature film.

Having established a career in architecture, Ivan Kadey now splits his time between Los Angeles and Miami. We talked about National Wake’s impact and the forces that shaped his journey from South Africa to the U.S.

HARD NOISE: What can you tell me about the National Wake documentary?

HN: Has it been a smooth process?

IK: [laughs] It’s been smooth in the sense that we gave them our notes and we haven’t heard much since then. You know, everything you do you hope is gonna move things along, but everything’s got its shadow. You just gotta keep moving.

HN: You’ve referred to the National Wake song “International News” as one of your greatest pieces of architecture. Did that whole thing just fall into place? That’s how it sounds. Or did it take careful crafting?

A lot of the later songs, we spent jamming in the practice room for hours and hours. The ideas, however, came quickly. Like the song “Bolina,” that’s about this cop who used to bust guys in the band for not having the right paperwork for being in our area. Black guys had to travel with a pass book back then…it was like a fucking concentration camp. “Bolina” evolved from that guy. Like, if you don’t watch out, you’ll get yours.

HN: What was your view of the United States before moving here?

IK: I thought the U.S. was way ahead of South Africa in race consciousness and race relations. But then, after living in America for a few years, the extent of the racism that still exists became apparent. It was everything surrounding Rodney King. I thought, Hey, America hasn’t sorted out race. It was just beneath the surface. In South Africa, [racism] was embedded into our laws, so I thought I was really escaping it, but no.

HN: What was the biggest life adjustment you had to make in the States?

IK: In many ways, I had to really deal with being a migrant laborer. I was here on a work visa. I was tied to the employer who got me the visa. Things didn’t work out too well there. Eventually, I just took my chances, moved from San Francisco to Los Angeles. Doing that, I met Vincent Van Haaff, who revolutionized the way we build recording studios. He made me a partner, which was wonderful. But initially, America was very hard. It took three years to feel like I was touching down.

HN: When apartheid ended, did you ever consider moving back to South Africa?

But I was three years in America, on an H-1 visa, which gave me the right to work. I was building recording studios, working on a lot of projects, and working to get my green card. Applying for a green card, that expresses a desire to stay in the country. So I was in limbo. As much as I wanted to go back to South Africa, I really couldn’t.

HN: But you eventually returned, just for visits, correct?

IK: Yes, I went back in 1992 after I got a green card. It could still be volatile. Some months it was like a honeymoon, some months there was a lot of tension.

HN: When was the last time you visited South Africa?

IK: The last time was 2014, roughly 30 years from founding of [anti-apartheid label] Shifty Records, of which I was a founder. There was a big celebration for that. It was amazing.

HN: Was that when you put a new group together to play the National Wake songs? I remember you talking about how hard that was, to recapture the exact magic.

IK: [laughs] Yes, yes. When the Light in The Attic album came out, I put together a band with a friend from San Francisco who had moved to DC, this guy Marty Pell. He has an amazing band right now called On The Bus, a Deadhead type band. Anyway, it wasn’t easy to put that new group together. It was great, don’t get me wrong, we had fun and it sounded great, but it was nothing compared to what happened with me and the Khoza brothers. They were just an incredible fucking rhythm section. I was blessed to know those guys.

HN: Yeah, it’s clear you had this bond that was on another level.

IK: You know what it was? Lack of time. We never had time in the studio. We laid those tracks down live. As a band, we were very tight. Everything except a few guitar overdubs is live. Some people say, “Oh, it’s a pity you never got to work with a great producer,” but the truth is our music is so much a product of what was happening and our time together. It didn’t need a great producer. The authenticity of the music comes out, it reads. And if you put [our songs together] chronologically, it tells this amazing story, a story of our incredible optimism which turns much darker.

HN: It’s true that the music doesn’t need anything else, but just out of curiosity, is there any producer you dreamed about working with?

IK: God, any number of guys. Matt Langer would have been an amazing producer. He could relate to the music on a roots level. I know another South African band that got to work with Bob Johnson. You know, Dylan, Blonde on Blonde. Can you imagine that?

HN: It must be gratifying that after so many years people all around the world have embraced National Wake.

IK: Oh, absolutely. It was buried! It was buried. There was almost 30 years between doing the album and people coming up and going, “Wow, we love this band!” It’s validating. You know, there’s also a group in Australia that wants to do a feature film about National Wake. I get a little tired sometimes telling the story over and over again, but it’s wonderful [laughs].