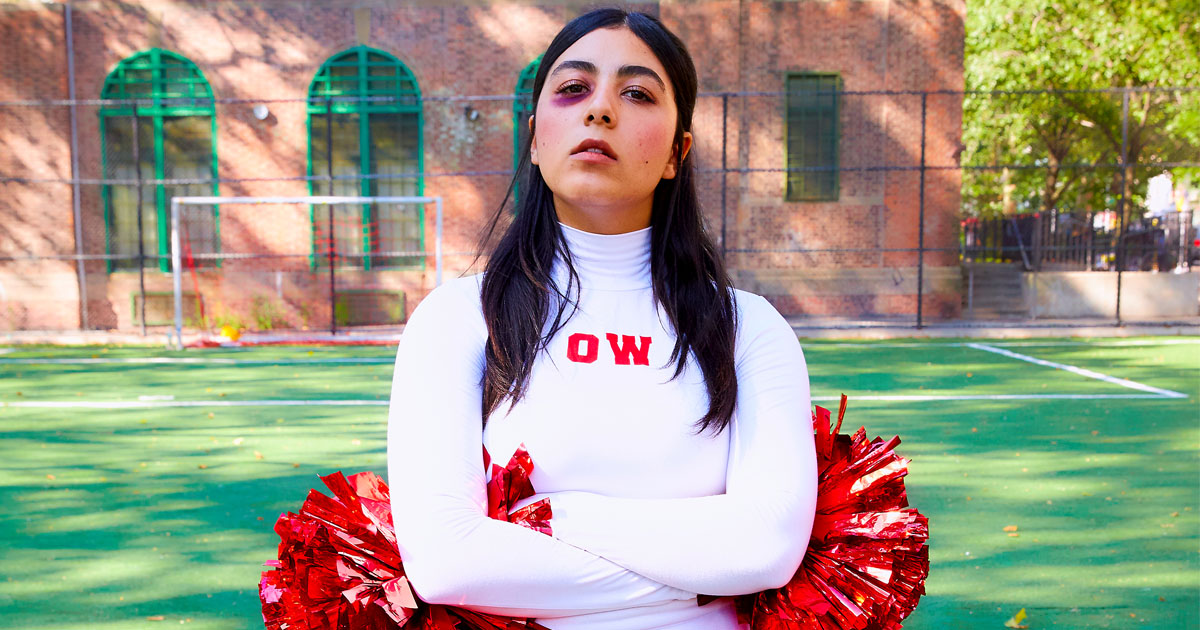 Digging into the Past, Present, and Future with Pom Pom Squad

Pom Pom Squad’s Mia Berrin (vocalist/guitarist) and Shelby Keller (drummer) are overcome with nostalgia when I meet them in Brooklyn’s Green-Wood Cemetery. “They had a big movie screen at the end of this road and a bunch of chairs and we just stood on the street to the side,” Mia gushes to me about a time the band played a show before a screening of Shirkers. She’s pointing in different directions and discussing the plot of the film with me, like we have known each other forever and she’s allowing me to reminisce with her. “It was awesome. It was one of the best nights. We were just here for three hours.”

In my own way, I feel like I’ve known Mia forever. Having binged 2017’s Hate It Here, and then this year’s Ow, I often turn to the warm, silky embrace of her lyrics in my more emotionally complicated moments. Pom Pom Squad’s music is inexplicably comforting in times of crisis — from the unbearable weight of depression in the cosmic “Heavy Heavy” to the need to feel new and different after a failed relationship in “Cut My Hair,” these are songs of serious catharsis. The feelings Mia communicates are messy and confusing, yet so sensible and tangible, similar to the album’s cover image of a defiant cheerleader with a black eye.

“I think [it] told a story that I wanted to tell,” Mia ruminates on the album art, “about externalizing pain that is not visible.” It’s an idea that takes her some time to summon, because it’s not a concrete connection, but rather a loose association that she holds to the image. She’s good with images — she tells me twice, once in the context of lyricism, and the other while discussing Tarot.

An image she hasn’t been able to shake from her head lately involves an insulated house. Ricocheting through her brain during depressive episodes is the phrase: “My heart is an insulated house / Nothing gets in and nothing ever gets out.” She describes this condensed sensation as “feeling like I’ll never be able to let go of pain, or [feeling] somewhat rigid or unable to be moved in my own opinions or feelings.” Then she sighs and resignedly concludes, “It’s hard for me to let go of things as a human.”

In the grass, I hand Mia my deck of Tarot cards. She accepts them with care, like I am offering her a limb off of my body. She has me put my hands on the cards, close my eyes, and think about situations, ideas, and general thoughts. I pull three cards — a past, present, future spread — and two are cups. “I draw the cups a lot,” she admits. “Usually when I draw them, it’s some sign of emotional exertion. Over-exerting yourself in a lot of cases, pushing to make things work that really shouldn’t or aren’t.”

Mia is no stranger to putting effort into things just for that work to be discounted. After pouring herself into Ow for a year, it only took two months for fans to start asking, “What’s next? What are you doing now? What is the new thing?” One insignificant piece of criticism specifically sent her into a self-deprecating spiral: “I saw somebody say something like, ‘The lyrics just aren’t enough.’ Enough for what? Enough for who?”

It makes sense when the card she pulls for her past is the Eight of Swords. It suggests entrapment, showing a perplexed woman standing in a circle of eight swords with an angel on one side of her and gorgons on the other. “Self-limiting beliefs, inner critic, releasing negative thoughts,” Mia lists the implications of the card, her voice getting louder with each one out of disbelief.

However, for her future card, she pulls the Hierophant, a figure symbolizing wisdom, much like a teacher (though the vibe that Shelby picks up from the card is “rock’n’roll pegasus”). Mia’s insights on her — and everybody’s — self-criticism and self-deprecation prove that she is learning valuable lessons from her pain: “It’s easy as a human to just hear one negative comment and harp on it — no matter who’s saying it or why. I feel like you, me, everyone assigns value to negative things about yourself.”

Her wisdom, though, stretches even further than that. With the album art of Ow, she’s dealt with a great deal of back-handed compliments, including, “I looked at her and I thought that I would hate it, but the music immediately endeared itself to me.”

“It’s like, the music didn’t do literally anything to endear itself to you, you just like it,” the 22-year-old spits with dignity. “For me, there’s no difference between wearing a cheerleading uniform and doing punk music. I understand that it’s like a mindfuck for some people, but it doesn’t feel that way for me.”

The cheerleader aesthetic is not only ripe for punk repurposing, but it’s personal. With Mia’s adolescence encapsulating a jumble of different experiences — a mixed race family, a cookie cutter private school, queerness, and of course, the oversaturation of media — she reached to what felt easiest: Media. “It was really easy to absorb an American cultural identity,” she says. “Movies, TV shows, teen fuckin’ sitcoms.” And what is more quintessentially American-female than a cheerleader? “All of the cheerleaders at my school seemed like these untouchable forces of womanness, girlness, white femaleness that I just didn’t embody.” 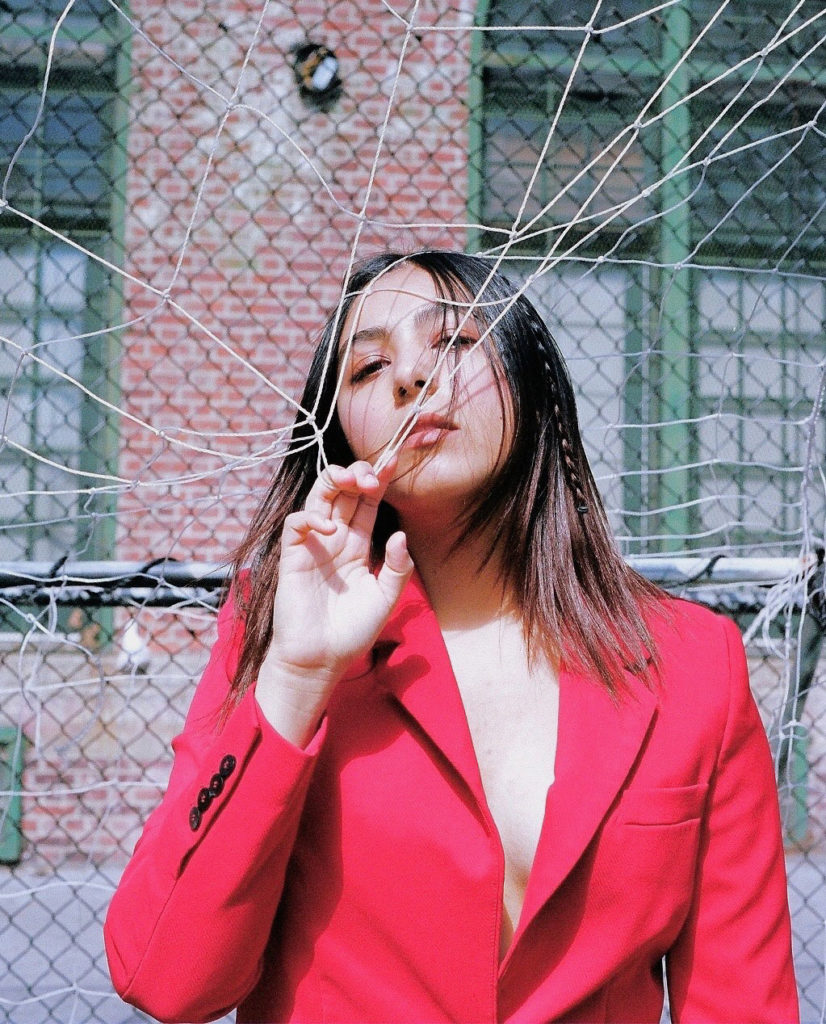 Pom Pom Squad is, in many ways, Mia’s way of reclaiming herself — of embodying something on her own, after being told that she didn’t fit anywhere else. She studied acting, but ultimately she was discouraged, both by others and by herself.

“I got a lot of criticism as an actor for not really being able to hack [roles],” she confesses. Those roles were always white upper-class people from classical plays, which made her recognize: “None of these parts were written for anybody that is like me.” And why should she want to play them in the first place — to take on an identity that completely erased her own?

“I realized that I had no passion for saying words that other people had written,” she says, especially as someone who grew up channeling her emotions though a journal. So, she gave up her disillusioned desire to play roles, and instead crystallized herself with Pom Pom Squad, where the words and feelings all stream directly and sincerely from her.

Whenever anyone inquires about her songwriting process, she always recites the Leonard Cohen quote, “I think all songwriters know that you don’t write the songs anyhow.” She bursts into laughter when I ask if there have been any strange or inconvenient places where a song has come to her. “I don’t know if I should say this,” she says in between cackles. “Like, during sex, I have to stop myself from writing down lyrics or ideas.”

After laughing some more, she elaborates more seriously, “I feel like sometimes in intense emotional experiences, not just sex, but having a heart to heart with a friend or in a really painful situation, even if you’re just having a really shitty work day and are just tired and want to die — intense emotional spots just pull images and feelings out of people.”

Hate It Here was produced when two guys from her school asked her if she was working on anything, and she lied and said she was writing an EP. Her knowledge of making music was extremely limited: “I didn’t have the language at all to be like, ‘I want this to sound like this,’ or ‘I want to mix the guitars like this,’ or ‘I want the bass to be this kind of pattern or go up to this note,’” she recounts with a twinge of regret. It’s a piece of music she can’t listen to without thinking of what could’ve been done to make it better, but it nonetheless plays like a masterpiece. “You/Him (Maybe)” is an idiosyncratic eulogy for lost love that closely resembles melodic slam poetry; “Protection Spells” is a relentlessly catchy anthem for young witches with colossal emotions.

Shelby is at the wheel of the Pom Pom mobile — a ’97 red two-door with racing stripes that is “not nearly as cool as it seems” and is “the reason [she’s] in debt” — driving us up and down the windy cemetery paths and frequently slowing down to admire tombstones and mausoleums. “Born in 1800. I found you,” exclaims Shelby, who’s been on a mission to spot the oldest graves. “Zalmon Taylor.”

Ow came to life after Mia went to NYU to study the music industry. She became familiar with everything from music business to music production, and landed a job as a press person at the renowned Girlie Action, who represents acts like Bikini Kill and Palehound. Mostly, though, she materialized her desire to communicate herself completely through music by learning the necessary language and means of production.

Brief was the period where Pom Pom Squad was known as an NYU band before becoming Brooklyn-based. However, Mia hesitates to call herself comfortable in the local scene: “I’ve been shown so much kindness by Brooklyn bands in the music scene and it’s something I’m extremely grateful for,” she starts, “but I also think there’s a difficult dichotomy where I feel like I’m not hard enough for the hard people and not soft enough for the soft people,” and then she shrugs. “Maybe that’s my own projection and imposter syndrome, it totally could be.”

As a band that identifies as “quiet-grrl,” there is that strange dissonance — they explode with punk intensity, and other times they hum with a slow indie rock atmosphere. Ow even includes violins, inspired by Mia’s friend who’s in the art rock quartet The Ophelias. “I don’t play a lot of bills with other brown girls,” adds Mia on the subject of diversity in the Brooklyn scene. “I still feel a little bit like there’s room to be made.” There is room to be made — and hopefully Pom Pom Squad will inspire that by proving that women of color can rock a stage as hard as anyone else.

For her present card, Mia pulls the Ace of Swords. An ace typically implies a new beginning, and swords generally symbolize actions. The image is of mountain ranges in the background and wind blowing in the sky. Mia derives inner clarity as the meaning, an affirmation that she has achieved the ability to “view the world with clear eyes.” There are still some blindspots in her vision, or some confused blurs, but, for the most part, Mia is on the right track. Ow catches her in that liminal space between catharsis and growth, and it is the clearest, most human image possible, no matter the madness and calamity crashing around her.