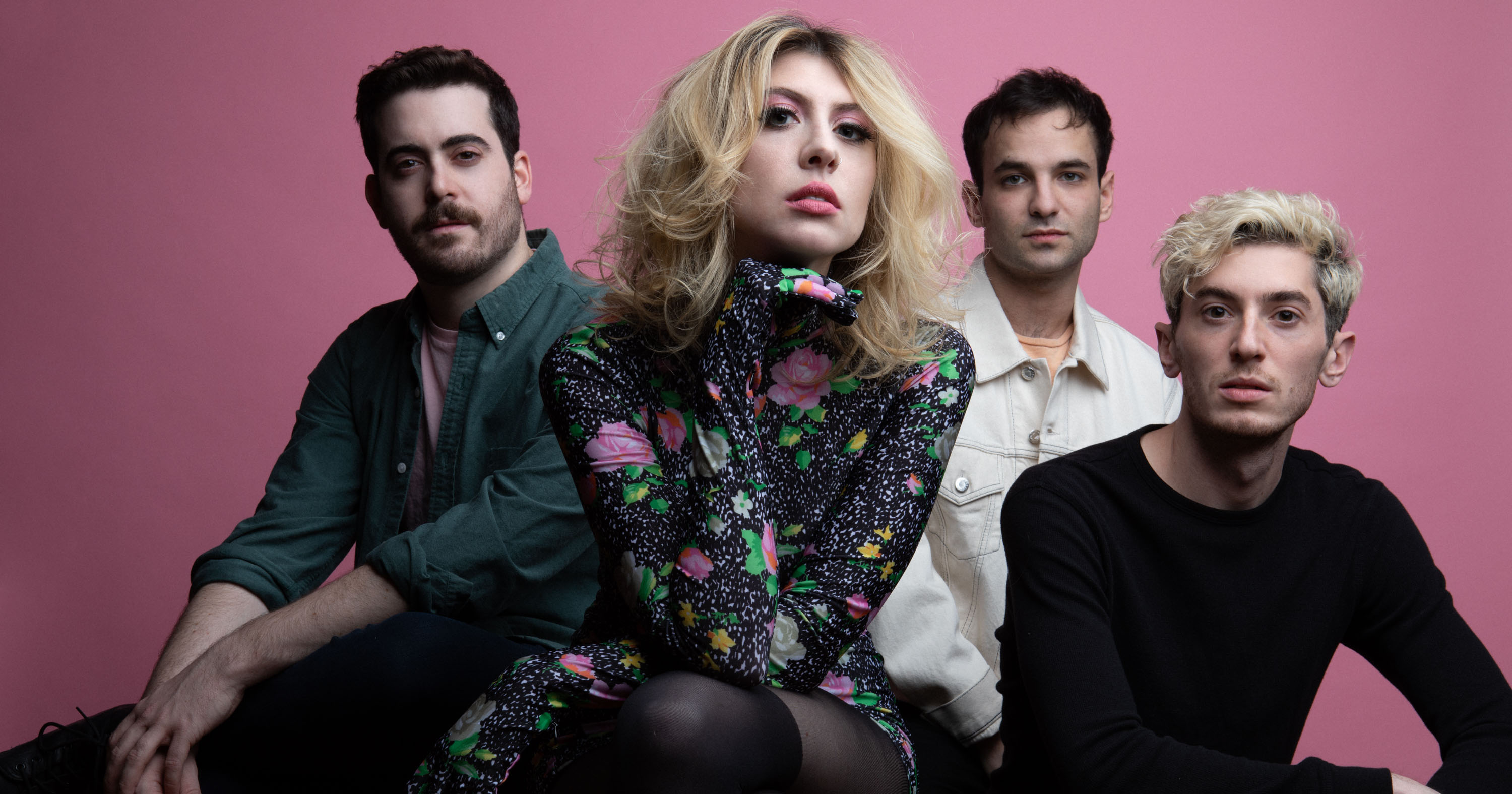 Interview: Charly Bliss on the Gravitational Pull of Power Pop

Charly Bliss is a four-piece power pop band from Brooklyn, New York. Originally a self-described “bubblegum grunge” band, the group has since transitioned their sound, and Young Enough, released last May on Barsuk records, showed them sticking the landing on becoming a pure pop band. Though singer Eva Hendricks’ lyrics discuss dark issues like abusive relationships, her sugary tones, backed by glowing synths, create a sound that empowers listeners.

Most recently the group released Supermoon, a surprise EP that creates a bridge from the band’s fuzzier Guppy-era sound to Young Enough‘s punchy, elevated pop. I spoke with lead singer and guitarist Eva Hendricks and her brother/drummer Sam about Supermoon, subway etiquette, and reality TV.

Hard Noise: How have things changed for you since Young Enough?

Eva Hendricks: It’s been a crazy year, we’ve seen a lot more of the world since then and we’ve been on tour pretty much non-stop.

Sam Hendricks: I think we’ve definitely noticed a change in our fan base. I think that we reach a lot more young people with this album, which has been really cool and it’s been amazing to see how our fan base has appreciated this album.

EH: We feel way more connected to our fans with this record.

Do you feel your fan base has shifted since leaning more into a power pop sound?

EH: I definitely feel that way and that’s been a really reassuring change. We’re grateful to have all of our fans, but it is a little disheartening to look out and see a fanbase that looks pretty homogenous, which is what we felt on Guppy. So I think that’s been a huge and completely welcome change. I think it’s also more representative of who we are, who our friends are, who we relate to, and who the music is for.

Everything on Young Enough, from the cover art to the thematic content, feels more high stakes. What made you want to take it to the next level?

EH: I think the songs just really call for it. The songs are really personal, they’re really honest and vulnerable. To us, the artwork needed to reflect that. Because the songs we write are personal, I see each of our records as the movie version of what happened in my life at a given time. They’re weird snapshots without a clear beginning or end.  It’s sort of like walking in to the middle of a movie, not seeing what preceded the dramatic event or what’s gonna happen next. I wanted it to feel like you’re walking into this super bizarre, high stakes, dramatic moment and trying to find your bearings.

How do you balance the intense themes with bright, pop sounds?

EH: I don’t think it’s something we’ve ever intentionally done, but both of our records are that way. What’s most interesting to me in music is hope, and the power that music has to give you hope and create connections with people that you’ve never met around the world. Whether that’s the artist that wrote the song or the people you meet at the show, whatever it is, I think that’s the most beautiful thing that music has to offer us.

When I’m writing songs it’s usually aspirational. It’s, “Ok even though I feel really low right now, I have to believe in a future where I get past this.” In a lot of ways, songwriting is what helps me get past things and come to terms with things in my life. That’s the magic to me; you can be writing about something that’s painful and put it down in a song, and sort of be praying for a future in which you feel really strong instead of really sad. That’s what I hope our music is to other people. You accept that there’s a lot of ugliness and you have to hope that it’s gonna get better, that you’ll get there eventually.

Why did you decide to release Supermoon as a surprise EP?

EH: We recorded that at the same time we recorded [Young Enough], at a time when we didn’t know which songs were going to be on the record and which songs we were going to leave behind. To me, they sound like a lot of the earlier stuff we were writing. I think they serve really well as an epilogue to our time making that record. It was more representative of how we see them, like “Here is a gift to our fans explaining how we got here.” It’s a goodbye to that era.

How do you feel about your previous records, given all that development in your sound?

EH: It’s sort of like if you go back and read a diary. As someone who pretty religiously keeps a diary, a lot of the time if I go back to something I wrote five years ago I cringe, like, “I  remember who I was at that point.” But I don’t feel like that person anymore, and sometimes I feel that way about certain songs.

How does Supermoon fit into that chronology?

EH: It’s not totally chronological. I see some songs as preceding Young Enough, but also it’s sort of an ending. Supermoon [was written] while we were playing it a little more safe. We were still working up our courage to write albums that felt like they were outside of what we did previously.

You headlined Webster Hall on your most recent tour, how did that feel?

SH: Pretty insane. That venue is so historic. To be headlining there now is humbling. We love that room.

EH: I actually met Spencer [Fox, guitarist for Charly Bliss] outside of Webster Hall when I was 15. I was attending a show with our bass player Dan. Dan introduced me to Spencer waiting to get into the show. I went to NYU and my dorm room was right across the street from it and I’d walk past it and always think, “Someday.” [Laughs]

SH: That first feeling of when we got to Webster Hall that day and we walked up the stairs into the main room and we were like, “This is where another show is going on, we’re probably downstairs.” That was the first legit tour we ever did we had no idea what we were doing. We showed up eight hours earlier than we needed to, they were like, “You can sit in this room I guess if you want.”

EH: We were very green.

More broadly, how did New York City shape your sound?

EH: On some level, I think it made us even more competitive than we already are naturally. Everything is right there, you live in a city where there are world-renowned venues all around you in one place. Luckily we really enjoyed it, we were like “Oh my god we booked a show at Arelene’s Grocery” and we were just so proud. We slowly worked our way up to playing DIY venues like Shea Stadium. I felt such tremendous pride as we slowly moved up, there’s such a good measuring stick for that. It’s made us so super ambitious.

SH: I am such a stickler about subway etiquette. Let people out before you go. I love the subway, I think it’s one of the best things about living in the city and also the worst. I would also say sidewalk etiquette. When people are on their phones and they stop in the middle of the sidewalk and you bump into them, it drives me nuts. I love New York City, it’s my favorite city on the planet and the things that drive me crazy, it also makes it kind of fun. You never know what you’re gonna get on the subway.

EH: Also we travel so much, we always say the opposite. If something goes wrong we’re like, “This would never happen in New York, people know how to be on public transportation in New York!” When I’m here, “Everyone is so annoying!” and then I leave and I’m like “New York is the best place on Earth!”

You guys are big Star Wars fans, who’s your favorite character in the series?

SH: More recently, the movies always tend to come out right around my birthday, so even though I’m thirty years old, I usually have a little Star Wars birthday party. I love Kylo Ren, I feel like he’s so complex but also such a typical dude. And I could relate very hard. Eva, you came to Star Wars a little bit later.

EH: I love it, I probably appreciate it a little bit more as an adult.  I would say favorite character is also Kylo Ren but for totally different reasons. He’s a major hottie. I just love that universe and love plugging into it.

What non-music related art are you drawn to right now?

EH: We’re about to gear up to really dig on writing the next record and I feel like it’s a period of refilling our brain process. I’ve been reading a ton, I’ve been obsessed with Sally Rooney books. Sam and I live together and we’ve been cooking a lot, cooking just makes me feel like I’m home. I’ve been exercising a ton, I love running when I get home, it feels so good to know where I am back in our neighborhood.

SH: I’m definitely a big TV guy. I rewatch shows I’ve seen a bajillion times before giving a new show a chance, which is stupid because there’s so many good shows. I’m a little bit more low-brow than Eva. [Laughs]. Our bass player Dan was recently watching Lost on tour, and I gotta say that is one of my favorite shows of all time, plot holes and all.

EH: And we’re both very interested in the art of reality TV.

SH: It’s just nice to have something to turn your brain off and watch without having to think or pay attention.

EH: Really early on in our band, Sam was the only one who had been on tour before and so I was really nervous about what going on tour would be like. He said something that I always think about which is, “When it’s good, it’s great, and when it’s bad it’s funny.” That’s a wonderful way to stay positive, especially in a career that has so many ups and downs.

SH: When you’re on tour and things are going great, you’re having fun, whatever. In the moment, things are bad but then when you reflect on them, [they] end up being the best stories from tour, the ones you laugh at the most.

EH: Like, how did we survive that and still want to do this?