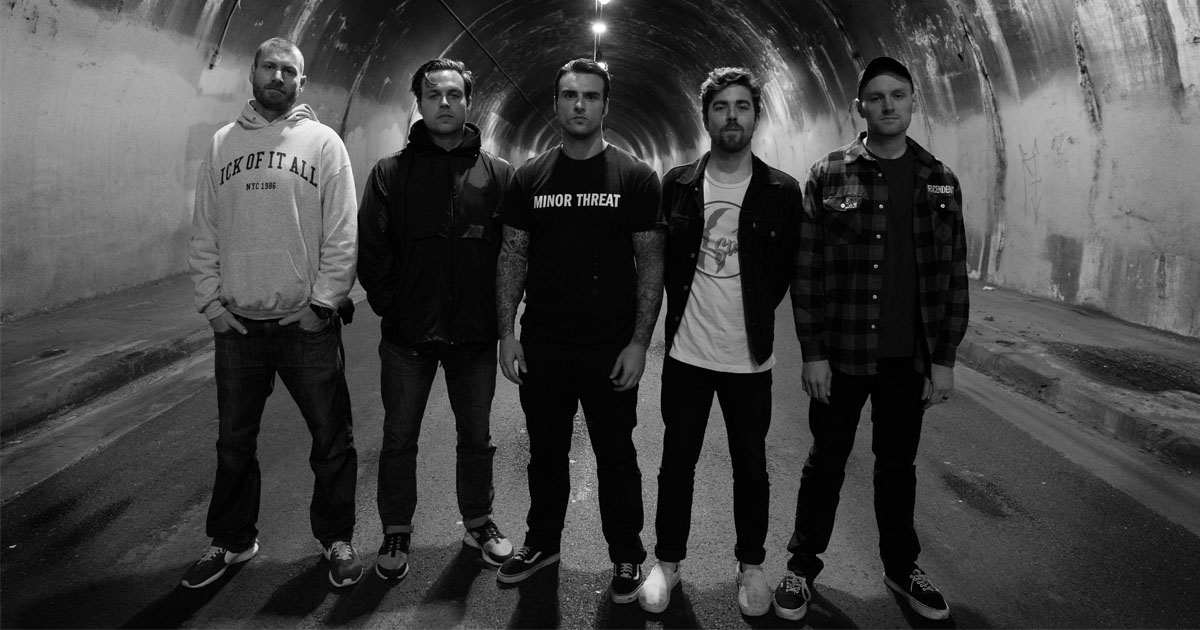 The (Re)Education of Stick to Your Guns

Political ideas often seem ephemeral and abstract until they slam into your life unexpectedly. What previously seemed like lofty, unfocused concepts become real.

“My parents got sold bad loans and had their home taken away from them, so [the Occupy movement] affected me greatly. Seeing the effect it had on my family… it ripped my family apart,” says Jesse Barnett, the fifteen-year frontman of hardcore band Stick to Your Guns. “With the system that we are currently living in, the blame hardly gets put on the people who are the predators… the [loans] did exactly what they were supposed to do. They ripped people off.”

It wasn’t just one epiphany that shifted Jesse and the rest of the band toward a more radical vision of the world; it was a lifetime of brutal wake-up calls that couldn’t be ignored.

“To this day my, Mom feels like she failed the whole family… The Occupy Wall Street Movement, I really felt connected to it. In that moment, more so than ever, I felt like I was aligned with other people’s frustrations… people saying ‘fuck this’ and taking matters into their own hands.”

Stick to Your Guns has been one of the most iconic melodic hardcore bands of the last decade. The band shared the “positive mental attitude” ethos and aesthetic synthesis of brutal thrash and indie hip-hop that marked much of the street scene. Hardcore has always had a political edge, particularly around the integration of straight edge culture. But this isn’t the 1980s, and explicit politics are not something most people expect from hardcore.

With a growing sense of political awareness over the past few years, Stick to Your Guns refused to let vague PMA slogans perform the work for them. They decided they had to question their own ideas and declare what they believed in.

It Was There From the Beginning

Stick to Your Guns (STYG) was formed in Orange County, California and quickly became known for their brazen style. Every facet of the band’s presence, from songs to merchandise, was blanketed with calls to action. Current STYG drummer George Schmitz joined the band in 2008 when he was only 18, fresh out of high school. While he came up opposing the U.S. invasion of Iraq and considered himself a “left of center Democrat,” joining STYG was hardly a revolutionary move.

“I myself was a very politically engaged person. I was stoked because any band I was in before had taken a more active role or active voice in terms of social commentary or political commentary,” says Schmitz.

Around 2010, the band started shifting and honing their lyrics, finding more specific ways to center class and the injustices that they’d only touched on before. With their album Hope Division, they drew a line on LGBT issues, which many Christian metalcore bands that were popular at the time refused to cross. They released tracks like “Wolves at the Door,” about the constant fear of living as an undocumented immigrant in the U.S. with the growing pressure of ICE raids. It was an album entirely about class that never actually said the word.

“That was when we started focusing on specific issues or topics, and we went from looking at things on a broad scale to narrowing down and starting to ask questions,” says Schmitz.

By the time the Arab Spring rose up across the Middle East in 2011 and was followed by Occupy Wall Street, there was a major sea change happening in the band.

The band acted fast and released the track “Bringing You Down (A New World Overthrow)” to echo the class antagonisms of the movement, adding it to the 2012 release Diamond. “For us it was this really formative moment, politically. We saw an actual praxis being put into play, and it was extremely eye opening to us. And from Occupy that led to Ferguson, and from Ferguson it led to more class awakening through the Sanders campaign.”

Jesse, George, and other members of the bands started to dig in on these issues, intentionally growing: reading, arguing, and reaching out to others in social movements. This process further guided the band’s trajectory and shape, from the amorphous world of anger over injustice, to class consciousness and something more self-consciously militant.

“Should I just say ‘communist’ and not worry what the repercussions are?” asks Jesse, laughing, less out of apprehension and more out of the self-evidence of it.

The positive outlook of STYG was based around the radical place that hardcore presents itself: rough music that is dangerous to listen to (especially live).  Whenever Jesse takes the stage and immediately makes demands of the audience, there is nothing passive, nothing to be taken as entertainment. His stage presence is about moving people to action, in their lives, in their community, in everything around them. Rage isn’t cultivated (the rest of the world does that). STYG merely came to harvest it.

“My music has helped me remain vigilant in my moral and political compasses,” says Barnett, addressing the promise of action that binds them to their fans. That growth didn’t happen by accident. There was an intentional commitment to learning and challenging themselves.

It’s normal for social movements to stumble, becoming too clouded in theory or bogged down by their own lack of energy, like a race car without fuel. STYG, on the other hand, are soaked in gas at every show, brimming with rage and hope.

“People within our scene need to be given maybe the proper theory or the proper tools to conceptualize,” says Schmitz. “Because what we do on stage is great, it is an expression of art and ourselves and we love what we do on stage… but, having said that, I can’t lie to myself and act as though that is a real sort of genuine praxis. Because at the end of the day I don’t think it is moving the needle. We are still working, and still a long ways away.”

There is something that happens in a music space, and even more pointedly inside something as visceral as hardcore, that cuts through apathy, unconscious political ideology, and confusion. It’s something that measured political arguments and literature simply cannot do on their own. And that is where Stick To Your Guns exists: at the nexus of their audience’s discontent and need for change through action. With their upcoming album, STYG are figuring out what kind of action that could be.

Calling the Question in 2020

The band heads into the studio in December to start recording an album that will be released right as the presidential primary election is heating up, and they intend to strike a timely chord with an audience who are already in that political headspace.

“Critical support for Bernie Sanders is where the camp lies. At the same time, I think all of us have a better understanding of power… electoralism is one piece of a larger tapestry. And it is a very precarious thing to put all your eggs in one basket. So we are of the belief that you can have a diversity of tactics. If we don’t take power for ourselves, then nothing can be accomplished,” says Schmitz.

They agree that this could be the last chance for electoral reforms, and even if the furthest-left candidate in twenty years makes it to the White House, it would change little other than the terrain for grassroots organizing, which is where the real work is done.

“The fact that young people are finding out that the dream that our parents have been sold is horseshit, and that that is no way to build a life, gives me hope,” says Barnett. “To me that can be molded, and I want to try to give people who feel that way a direction.”

They hope to align this sort of “spiritual guidance” with compassion and empathy, rather than the elitism so often seen in the grad school culture of leftist politics. These are working-class people talking about working-class issues, and trying to meet people where they are at. “No matter what happens, we need to approach other humans. They need to be approached with compassion and understanding, otherwise you just become the fist that tightens the screw,” says Barnett.

Self-education was so key for STYG that they’re bringing that into their shows, working with radical publishers like Haymarket and AK Press and featuring handbooks for the revolution at their merchandise table alongside the requisite t-shirts and vinyl. While they want to have some influence in the direction of the presidential primary, there is also hesitation and uncertainty about whether aggressive hardcore is actually useful in stumping for a candidate. The band wonders if they’d be better off focusing on their ability to push at the limits of the discourse, especially with hardcore kids.

“I don’t have to worry about saying something and have it put on Fox News to bite me in the ass. But I never want to get up on stage and make it sound like I have it all figured out, like ‘follow me.’ It’s important to have a sense of dialogue,” says Barnett.

The next year, the next election, and the next album are going to be another series of turning points, similar to the same ones that have marked their career and helped guide the band to pursue the personal growth that inspired their original positivity. Only now, they are staking a claim in a particular vision and committing to a revolutionary new world, one where they will simply be part of something even bigger.

“I hope that it can maybe be seen as some kind of inspiration for people to start thinking in terms of solidarity and class consciousness. But, again, we are not the experts,” says Schmitz. “I would just try to push people in the direction of those who are.”