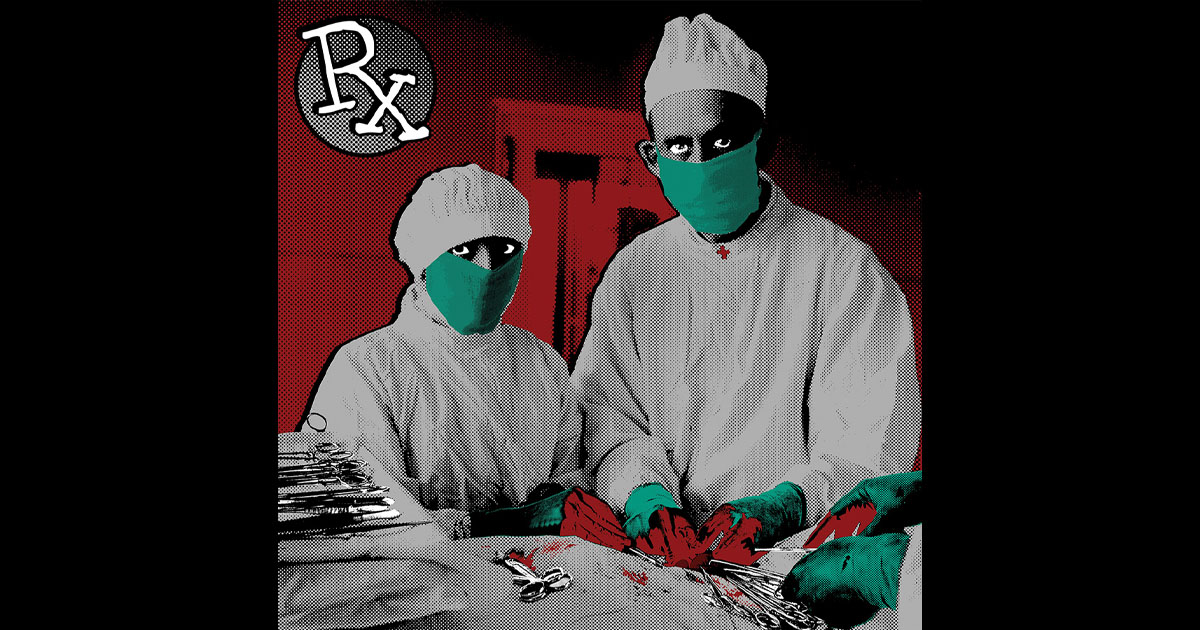 It’s nice when a band tells you exactly what you’re in for. That’s the story with School Drugs–who make it very clear they’re from around the Jersey Shore. The hardcore group self-identifies as a mix between Black Flag, Poison Idea, Tear It Up and Bad Brains, and delivers. The result is classic ‘80s instrumentation with an astonishing mix of La Dispute sing-speak and a throatier version of Gun’s Up screaming, plus a little of that Bad Brains influence in the drum rhythms and old school power chords. The first impression of School Drugs is that, like their name suggests, they’ve studied up and know their stuff.

School Drugs is not a new group–their previous releases date back as far as August 2016–but their sound on 2019’s Modern Medicine is fresh. I’m a sucker for melodic hardcore, so when tracks like “Joyless” and “Overrated Life” introduce sneaky samples of this alongside the more purist-approved sounds, it’s a much-welcomed treat. From bits of female vocals to a 5-second lick of piano, the entire album reads like a sonic jigsaw puzzle. Modern Medicine brings in so many different styles of hardcore that it should feel like musical whiplash, but instead it meshes so well that it just sounds natural.

“Nothing Grows” shows this the best. The track starts off with very slight ska vibes, but abandons that about 30 seconds in–leading into a powerful chant about the passage of time and the cautions of growing more callous with age. Similar to their La Dispute predecessor of “King Park,” “Nothing Grows” deconstructs into a slowed-down bridge signalling the next motion of the track’s overall symphonic display. Although School Drugs is fuzzier than a lot of their post-hardcore predecessors, the comparisons are there–from the confessional-style lyrical reflections to the organized, technical chaos brought by the rest of the instruments.

And can we talk about the mixing? Hardcore, punk, emo and the umbrella of other genres that derive from the same influences all have an emphasis on loud, fast rules–which sometimes translates into gritty, uneven tracks that rarely last long enough to hold any substance. And the proliferation of cheap, free, or jailbroken mixing tools doesn’t always translate into a crisp sound. Modern Medicine avoids these pitfalls entirely. It’s refreshing to just stream an album and be able to clearly hear how each guitar and bass line are defined within their own space on the track. Sure, I might be jaded. But I’ll give credit where credit is due–and the mixing and mastering of this album are done extremely well.

Overall, despite the prestige that many older generations of punk and hardcore have set, bands like School Drugs show that moving forward and experimenting with different styles can turn into an exciting, fresh demonstration of pure musical talent. I grew up listening to the classics just as much as the next person, but after simmering in some new-age hardcore, I’m ready to let the Enema of the State nurse retire and move on to the doctors of Modern Medicine.