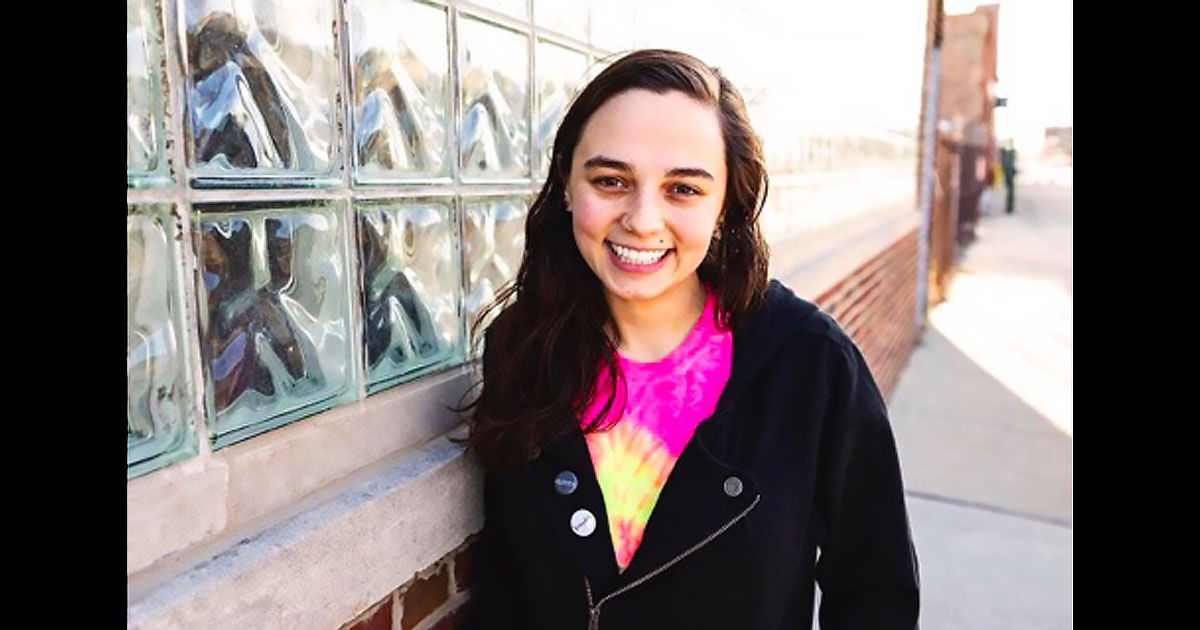 It’s Garbage Can, Not Garbage Can’t: An Interview With Deanna Belos of Sincere Engineer

Sincere Engineer is the stage name chosen by Chicago punk Deanna Belos. The 27-year-old grew up in the Windy City’s world-famous punk rock scene, idolizing bands like The Lawrence Arms and Alkaline Trio. Originally aspiring to be a dentist (as chronicled in the fan-favorite track, “Overbite“), Belos inevitably found her way to music, composing songs in her mom’s car on an acoustic guitar. Belos cut her teeth as a solo act, but released her debut record Rhombithian in 2017, fronting a full band.

The tracks showcase her self-deprecating sense of humor and raw honesty, confronting the listener while reassuring them they’re not the first person to fall asleep eating corn dogs on the couch. Her intense song lyrics about waking up on bathroom floors and yearning to keep a crush company are accompanied by melodic punk chords that cement her as the wunderkind of midwestern punk and emo.  Her latest release, “Dragged Across the Finish Line,” appeared on Red Scare Industries’ 15-year anniversary compilation record this past fall, and dropped alongside a music video depicting Belos and her band as trash cans running a race. Like Belos herself, there’s a lot of heart and ambition underneath the goofiness. I caught up with Belos to talk Chicago, Norm MacDonald, millennial burnout, and mental health.

HARD NOISE: As a product of the scene, what do you think makes the Chicago punk scene unique, and how has it influenced your sound?

DEANNA BELOS: It’s like super close-knit, and super supporting of everyone. It’s a good place to start out and try out stuff and get good feedback. People would be nice even when I wasn’t good. Not that I’m good now, it’s just encouraging. I think it’s the best music scene ever. It seems like we’ve got something special here.

HN: How was it making the transition from a solo act into a full band?

DB: It was awesome. It wasn’t my idea, originally. The kid that produced our record, Matt Jordan, was like, “We’re gonna make this full band,” and I was like, “Okay.” And then he recruited my band members, and now they’re my best friends. So it was a super easy transition. They’re all really good.

HN: What has fronting a full band taught you?

DB: [I have to] be super communicative all the time. It’s like running a little business. (Laughs) It turned into a little job, sort of. Just make sure everyone’s happy.

HN: What are the pros and cons of performing solo vs having a full band?

DB: Solo, everything’s on me, so if I do well I can have that— like, feeling good about something I made— all to myself. But having a band is awesome because the shows are so much more fun. I like the team effort. I can hide my mistakes easier. (Laughs) There’s a time and a place for [solo shows], but I like having my band with me. Traveling with them is way more fun. This is still new to me. The novelty of having the band behind me is still cool.

HN: Your lyrics are super honest. Is it ever hard being that vulnerable?

DB: It’s all I know. I’ve tried writing fiction and it doesn’t feel natural, or I feel like people are gonna be like “What is this?” Blunt, direct stuff is what I feel more comfortable writing.

HN: Do you find yourself looking differently at Rhombithian now that two years have passed since its release?

DB: I think it was a super healthy way to work through that shit. And I got this record that I’m proud of out of it. Also I don’t drink anymore, so I’m not waking up on a bathroom floor anymore. I’m sure that will come, though; there’s slip-ups, of course. [Laughs]

HN: Is there any Chicago music you think people should be checking out?

DB: Retirement Party is awesome. Beach Bunny, they’re like, amazing. I played with Beach Bunny, we were both solo, in the suburbs in 2015 or 16, maybe. We were all super young, I was like 22 or 23, she probably wasn’t even of age yet. That was a weird show. The headlining band got kicked out. They cut the electric on them cuz they were throwing shit and got into a fight with the security people. It was a weird time. They still played, this was in Barrington, Illinois or something. [Laughs]

HN: Sincere Engineer was named best new band and runner up for best rock band of the year by the Chicago Reader. How does it feel to be recognized by your hometown like that?

DB: Super cool. We’re not that new so I felt kind of bad, but we’ll take it! [Laughs] It was awesome. A lot of our friends that are bartenders got placed in that [list], a lot of our favorite places to play and hang out in got placed as well. A lot of our friends are in different categories too. Just the fact that they do that [list] motivates people to create stuff. They had like, nine pages to scroll through of best of this, best of that, some things you wouldn’t even think of. We were on page eight, and I was like, “Oh my God.”

HN: You have a great sense of humor on Twitter and in your songwriting. Where does that come from?

DB: My parents, we make fun of each other. I grew up watching a lot of Norm MacDonald. I have a tattoo of his face. Dirty Work, you should watch that movie. I’ve seen it like a hundred times. I like his attitude.

He cares but he doesn’t care, I could write a whole paper on this. [Laughs] He’s funny just talking, even when he doesn’t try to be.

HN: What else makes you laugh?

DB: Pretty much everything. [Laughs] My bandmates. Fart jokes. [Laughs] Me and Nick [Arvanitis, bass player for Sincere Engineer] have a really good rapport. He’ll laugh at me doing something and then I’ll think his laughing is funny. We’re cut from the same cloth. The shows where we bicker back and forth are the funniest. That’s always the best.

HN: What kind of non-music related art are you drawn to right now?

DB: I’ve been drawn to photography, I’ve found a lot of cool photographers on Twitter. I bought a Switch on the last tour. Our band game right now is Tower Fall. And Mario Party, of course. My first system was N64, Banjo Kazooie was great.

HN: I know you’re a huge Lawrence Arms fan and that they’re a big influence on your music. What are your first memories of that band?

DB: I think the first song I heard was “Martha Plimpton.” It’s probably still one of my favorite songs. I found out about them because I was obsessed with [Alkaline] Trio at the time, and then they became my favorite band. I was a kid, probably 13 or 14, I used them to escape. I would see them and I knew that nobody I went to school with was at their show. It was my thing that nobody else had. I sat alone at lunch and shit.

HN: It gave you a community.

HN: You later went on tour with the Lawrence Arms. Do you have any favorite memories of that experience?

DB: It was a dream come true. Chris and I, he did “Shattering” with me. We stayed at Toby [Jeg, founder of Red Scare Industries records]’s place one night on the porch and I was like “Could you play this Broadways song?” I was fangirling so hard. He was playing all these really deep cuts. It was the coolest thing.

HN: You’ve also mentioned you’re into dad rock. Do you find yourself going to bat for any bands in particular?

DB: The Eagles. There’s some sort of thing that happened in the punk scene where it’s cool to hate on The Eagles, or The Doors. I don’t love them, but there are people that are very vocal about hating them. Brendan Kelly is one of them. Those are my dad’s favorite bands, so I grew up on it.

HN: You released a Sincere Engineer beer over the summer with Pollyanna Brewing Company, how would you describe that?

DB: It’s a sour, but thicker and sweeter. It’s a little milky.

HN: Is that your go-to drink?

DB:Sours? Yeah. Raspberry, fruity. I like when it hurts in the jaw. It sucks but I like it.

HN: I’m a firm believer that drinking should hurt as a reminder that you’re literally poisoning yourself.

DB: From the first sip to the next morning!

HN: Let’s talk about your new song, Dragged Across the Finish Line. Was it hard filming the music video with a trash can on your head?

DB: [Laughs] I couldn’t see anything, none of us could. We just had to follow the lines on the track.

HN: Where did those visuals come from?

I bought a guitar and it came in a big box and I thought, “I wonder if I could walk in this box and do something for a video?” And then somewhere along the way I thought about doing trash cans instead, because we’re all just trash people, you know? The thought of trash cans running a race to encapsulate what humanity is was really funny to me. Not a lot of thought went into it, it was done in a day.

HN: The track deals a lot with comparing yourself to others. Are you a competitive person?

DB: No. I don’t care about anything. [Laughs] When you put a lot of time into something, you want there to be fruits of your efforts, and sometimes they don’t happen. And it’s like, focus on yourself, and they’ll come. It was another play on the “Overbite” finishing school thing. Just like, waking up every day and going to work and stuff.

I’m not here to be the best. This ties into the whole thing about the workforce. It sucks that it’s very common if you’re the best employee for 8 hours a day, and you’re not willing to work overtime or work a holiday, all of a sudden you’re worthless. In the past I’ve had jobs where I felt like that, where I’m like, I should not feel bad for taking a sick day. It’s crazy.

HN: Do you feel like that culture is a cause of millennial burnout?

DB: Yeah. Maybe older people are used to being treated like that but also, mental health problems are more common now, it seems, because there’s so much pressure. Taking a mental health day isn’t admitting you’re weak, it’s like, I have a life outside of my 40 hours here. Giving it your all for that 40 hours should be more than enough; it’s what you signed up for. I’m not gonna kill myself working overtime till like 7:00 at night, I have other stuff to do for myself. I get so riled up about this sometimes!

DB: Oh definitely. I’m a generally anxious person and get stressed out and overwhelmed regularly.  Taking mental health days is important for sure. The fun thing about doing that is, halfway through, I regret taking the day off and start feeling guilty and worthless. [Laughs]

HN: What does music mean to you?

DB: It makes life more fun and it’s the thing I’m most drawn to. I love it. I love that there’s songs that make you feel not alone. These are very cliche things, but they’re true!

Sincere Engineer is playing at Summit Music Hall with Against Me! on New Year’s Eve in Denver, Colorado and going on tour in March supporting Oso Oso and Just Friends. Tickets available here.