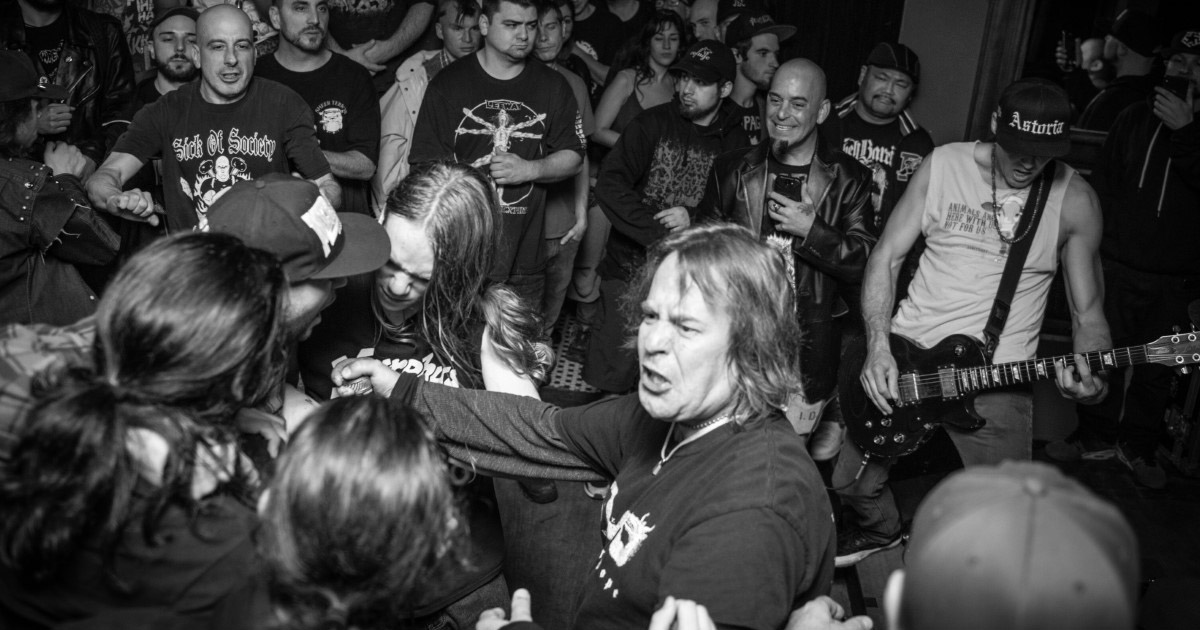 Interview: Joe Songco on the Revival of Outburst

A few years ago, I was in a darkened downtown bar accompanied by a former fanzine editor who came from the early era of New York Hardcore. Whilst in the middle of our ill-advised afternoon buzz, I remember he leaned across the table and, with a major case of beer breath, slurred into my face: “I’m telling you, no Queens, no New York Hardcore!”

Although I wished he had popped a breath mint prior to telling me, it was hard to argue with the statement. The borough has been responsible for such renowned acts as Kraut, The Mob, Murphy’s Law, Leeway and Gorilla Biscuits. Another band that found its way down from Ditmars Boulevard to the Lower East Side of Manhattan during the ’80s was Outburst, a five-piece who made a name for themselves quickly due to a small-but-hard-hitting batch of tunes including “The Hardway” and “Thin Ice,” and the reckless antics of their vocalist, Brian Donahue. At the end of the decade, the band flamed out soon after the release of their seven-song seven-inch EP Miles To Go.

But in the past few years, Outburst has found a new audience among those digging deeper into the history of New York Hardcore. Not only has this newfound interest in the band provided great cover material for bands such as Texas’ Power Trip, but it’s got Outburst back together and touring again. And coming close on the heels of their European tour with Terror is both a re-issue of Miles To Go and Hot Shit Attitude, a tribute album featuring such notable present-day units as Krimewatch, Fury, Higher Power and the previously mentioned Power Trip putting their spin on the band’s tunes.

In between all the hustle and bustle of touring and the release of both these records, Outburst drummer Joe Songco managed to find the time to talk to me about how the tribute album came about, the band’s recent popularity due to the internet, and much, much more.

HARD NOISE: How did the concept for an Outburst tribute record come about?

Joe Songco: In 2015, Outburst bass player Mike Welles, Mike Dijan (Crown Of Thornz and Breakdown guitarist) and I went out to Brooklyn to catch Power Trip’s set. We’d heard that they covered the Outburst intro and Breakdown’s “Jail Of Depression,” a Mike Dijan-penned classic. It was around that time that Blackout Record’s Bill Wilson threw out the idea of a collection of the bands and their covers that we’d heard. Crazy to think that here we are with Hot Shit Attitude.

How did you find out about the popularity the band had gained since breaking up in the late 1980s?

When Jonathan Buske was trying to recruit us to play the 2012 Black N’ Blue Bowl, he said to me, “I’m not sure if you’re aware but there’s this faction of young hardcore kids who are all into Outburst these days.” At first, it was kind of like “Seriously?” but it was also a feeling of amazement. We didn’t really have this extensive catalog but it was a very cool to know that this new generation of hardcore kids were into our stuff.

What has been the most surreal thing you’ve experienced since discovering the international interest there is in Outburst?

There have been so many great stories we learned through our communications with all the bands while putting the tribute compilation together. One of the coolest things was Power Trip including “When Things Go Wrong” in their live set on George Stromboupolous’ The House Of Strombo, a Canadian music tv show on Apple Music. Riley introduced the song as a cover and mentioned that we were pals of theirs from New York. That introduced us to this whole new audience, which we thought was so awesome.

Hot Shit Attitude features bands which include female members such as Krimewatch and Initiate. Was this a conscious effort to not make the album a total sausage party?

It wasn’t a conscious effort at all, but it’s definitely very cool to see that hardcore is much less of a boys club. Big Boss, which is fronted by a girl named Dascha from Siberia, contributed “Controlled” early in the process. Not too long after that, we got tracks from Krimewatch, Initiate and Outskirts. The great thing is that all these bands aren’t just novelties because they’re female fronted. They can play and they rip! And they’ve gigged with us, Killing Time, Power Trip, Youth Of Today and Terror. The inclusion is real and the acceptance is definitely awesome to see.

What is your take on hardcore in the present day and how do you think it differs from the scene Outburst were a part of thirty years ago?

It’s definitely more of a worldwide movement. The internet has played a huge role in that. Today, you’ve got things like Bandcamp to get your band’s music out there. All these digital streaming platforms like Spotify and Apple allow fans to delve into all kinds of hardcore. With Facebook, Twitter and Instagram, bands can let their audiences know about upcoming shows, tours, music releases and anything else. The ‘zine game has also become strong on the web. If you live in a place where your favorite band might not come through, you can catch clips of their live show on YouTube or their social media.  Hardcore has definitely evolved a lot from the days of tape trading and word of mouth. It’s much more user friendly today.

You recently came off your first European tour opening for Terror. What were the highlights from this adventure?

Big thanks to Terror for taking us out to start their European tour. We joined Lion’s Law, Jesus Piece and Death Before Dishonor and the whole experience was a highlight to be honest. From the great chats on the bus and the dressing rooms to just being able to see each other every night on stage, it was so much fun.

I’d say the big highlight was playing The Sound Of Revolution in The Netherlands. That was a two day event in Eindhoven in this huge airplane hangar and the audience was easily a couple thousand people. The crowds that came out in Germany, London & Leeds were great as well. One of my personal favorite things to see every night was the part of the Terror set where Scott demanded everyone get up on stage and it became hazardous to everyone on stage!

It is well known that Queens was a breeding ground for some of the best New York Hardcore bands; Outburst included. What do you think it is about the area that produced so many killer bands?

Queens either had the luck of geography on its side or there must’ve been something in the water. Or both! There were the bands who were like the teachers that inspired us, like Kraut, The Mob, and Murphy’s Law. For us as students, the elements were there starting with high school. We went to St. John’s Preparatory School with Anthony Communale from Gilligan’s Revenge and Killing Time, as well as AJ Novello from Leeway. Over at Monsignor McClancy, you had Civ and Arthur Smilios from Gorilla Biscuits and Leeway’s Michael Gibbons. We lived on the same block in Astoria as guys like original Leeway drummer Saso and Mike Dijan.

Were there any certain areas in the neighborhood that hardcore kids would congregate?

As far as the meet up spots, you had Astoria Park, the Pyramids skate park and Pizza Palace on Ditmars Boulavard where there was plenty of quality hang time. We’d hang at photographer BJ Papas’ house in Astoria and there was the Gorilla Biscuits apartment off of Northern Boulavard, too. Roxy Studios in Long Island City was a great place to cross paths with a lot of the Queens bands. I remember around the time Arthur Smilios was joining Underdog on guitar, we ran into him and Walter Schreifels there and we jammed the whole Underdog seven-inch! It was George and Jay from Outburst on guitar, Walter on bass, me on drums and Arthur doing his best Richie on vocals. We recorded that on my boombox and I don’t know what happened to that tape but that was a blast!

Along with Hot Shit Attitude, Blackout will also be re-issuing your classic seven-inch EP, Miles To Go. Will there be anything else added onto the release?

The reissue will be the Miles To Go seven-inch remastered along with our demo and the track “The Hard Way” from the Where The Wild Things Are compilation.

Do you have any insight into why the music of Outburst has resonated with so many people throughout the years?

I honestly don’t know what to say except it’s such an indescribable feeling to know that music and lyrics that were written so long ago can inspire today’s bands and mean something to hardcore fans in 2020. We can’t say thank you enough to the bands who have ever covered one of our songs, or to anyone who has ever quoted one of our lyrics in a high school yearbook or on their social media.

Dascha from Big Boss hails from Siberia and the fact she found our song “Controlled” and recorded it by herself speaks not only to the power of the song but also the power of the internet. There is definitely such a satisfying feeling as artists when your music and lyrics reach and inspire listeners.

So, what does the future hold for the revamped Outburst? Will you record new material or continue to tour?

To quote a Debbie Gibson lyric from her 1990 single of the same name, “Anything is possible.”

Miles To Go and Hot Shit Attitude are out January 31st from Blackout! Records and can be pre-ordered here.