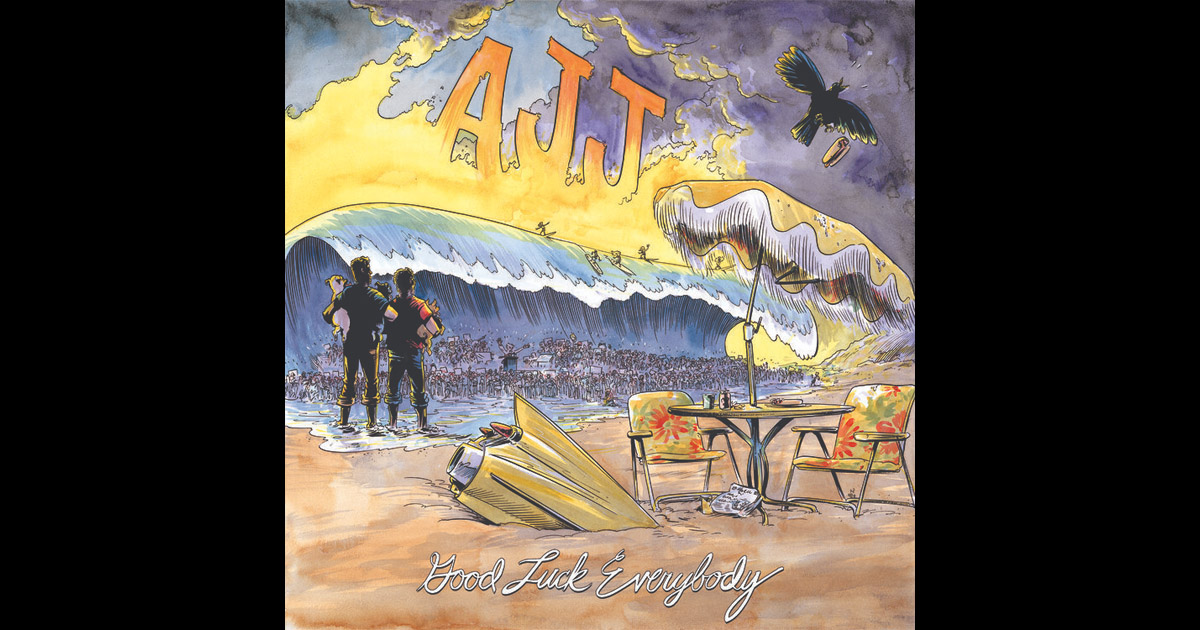 Arizona folk-punks AJJ (formerly known as Andrew Jackson Jihad) have always been outspoken, tempering their music’s humanistic messages with offbeat humor. Now, at the beginning of a major election year, AJJ have tasked themselves with a musical response to the chaos tailor-made for 2020. Out January 17th on the band’s own label, AJJ unlimited LTD, Good Luck, Everybody delivers.

Good Luck, Everybody is so bleak, even the most humorous points are shrouded in morbidity. “Psychic Warfare” is an ornate, springy song propped up by a strings section that centers on hypnotizing President Trump into dropping dead. Another comes in midway through the album: “Mega Guillotine 2020,” a track endorsing an extra-efficient beheading device, is accompanied by a children’s singalong-style music video.

The concept stems from a viral tweet of its prototype. It feels like a microcosm of the times we’re living in right now—a song that couldn’t have come to fruition without a meme, and one stoked by an economic climate so inhumane, people joke that beheading just one person in power would be insufficient. Maybe it’s less joke than bitter acknowledgment.

While the absurdity is certainly appropriate, AJJ also describes the expansive and relentless turmoil that has plagued the nation since Trump took office with more tact at other points. A lot of the instrumentation on this record is stripped-down and fastened. Frontman Sean Bonnette sings coherently throughout, shifting focus to the messaging. It’s meant to be consumed lyrics first, everything else afterwards.

Backed by a throbbing, clarified piano piece, “No Justice, No Peace, No Hope” expounds on the distressing amount of overlap between present-day and historical injustices, concluding that the notion that this country has made leaps toward progress is a fallacy. Bonnette sounds upset with himself for being naive, too, wailing “I can’t believe that I believed that goodness was inherent.”

The more cruel politicians and CEOs are, the easier it becomes for everyone else to elude accountability. So long as you’re not the one personally enacting policies that ruin lives, you can seem pretty alright by comparison. Standout track “Normalization Blues” challenges that, asserting that Americans contribute to the calamity of the modern political climate by becoming desensitized to cruelty via repetitive exposure. In the beginning of Trump’s presidency, people were fiercely galvanized—and that’s not to say everyone’s apathetic now, but for so many, the shock has worn off: “I’m observing drastic changes in the way we’re all behaving.” The chords on this song are engagingly frenetic and skittering, and Bonnette matches that by scurrying through line after line. The rhyming verses add a whimsical flair that take on the aura of a particularly dark and hopeless Dr. Seuss book.

Good Luck, Everybody comes to us in the beginning of an election year, which presents the country with an opportunity to steer itself towards a brighter future. Voting and community building are, after all, more effective than psychic warfare.