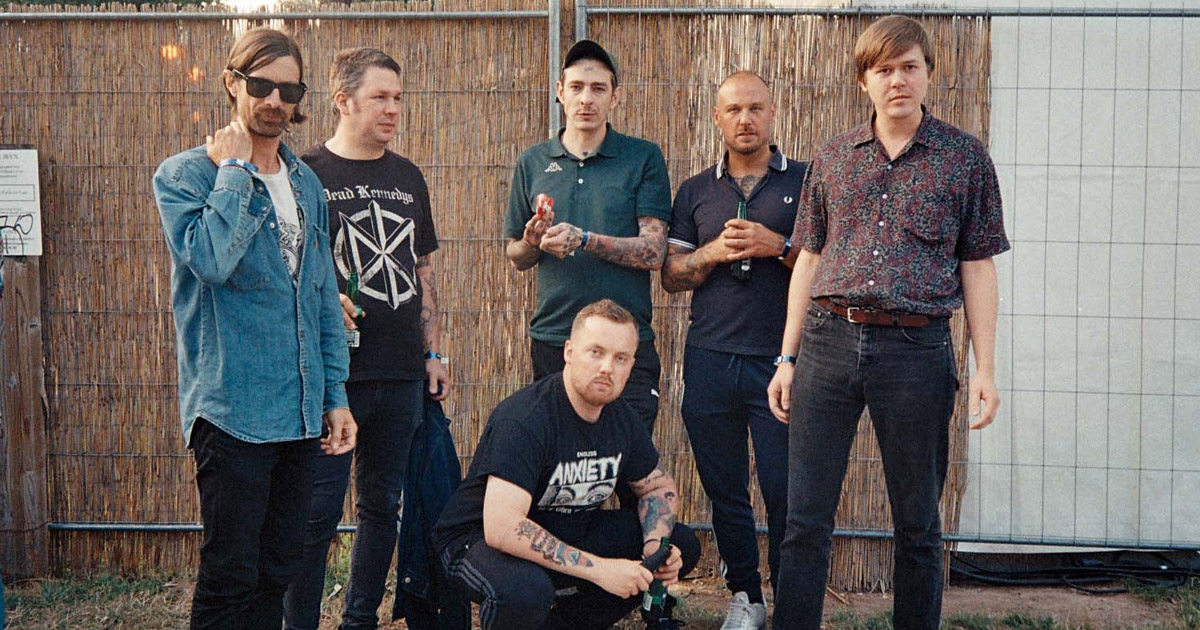 How Viagra Boys Use Satire to Push Punk Into Deeper Territory

Listening to Swedish Post-Punk band Viagra Boys is like stepping into a comical nightmare of misadventures with no sure way out. If you have ever experienced drug addiction in any way, shape or form, you might be familiar with the ways that storm of self-loathing and destruction presents itself. Drug addiction and toxic masculinity have made up a large amount of the subject matter of punk music since its introduction, sometimes intentionally, sometimes not. Correspondingly, some bands are forever screaming about the struggles of being strung out or penning problematic lyrics about cheating significant others. However, Viagra Boys are different.

They play with a satirical brilliance, making commentary that promotes equality, shames toxic behavior, and sheds light on substance abuse problems within society in the most absurd way possible. Viagra Boys project an amphetamine-induced adrenaline rush with their unique sound, which has been described as the lovechild of Devo and Iggy Pop. Their lyrics are half-spoken, half-sung in faux inebriation by frontman Sebastian Murphy to deliver heavily intoxicating punk songs with a darkly comedic twist that forces the entire genre deeper into more meaningful territory.

Murphy transforms into the character he writes about—basically an amalgam of every troubled fuckboy—and he plays the part incredibly well. Covered in vibrant tattoos (including one that simply reads “Los” that sits right on his forehead above his signature speed dealer sunglasses), Murphy dances and flails around the stage, maintaining a rapidly shifting intensity in his vocals.

With the release of two EPs, Consistency of Energy (2016), Call of The Wild (2017), and their first full-length album, Street Worms (2018), Viagra Boys consistently demonstrate a mastered ability to satirize society’s most reprobate corners. Street Worms kicks off by tearing down masculinity in relationships with an aggressive mocking of a cheating husband that’s been caught seeking out adventurous BDSM with strangers in “Down In The Basement.” Later in the album, Viagra Boys continue to mock the cultural institutions of traditional masculinity with “Sports,” and further drive their point across in the music video featuring a shirtless, strung out Sebastian Murphy screaming out various male-dominated activities and interests while pummeling around a tennis court as a game goes on around him.

The emotional pillar of the album comes with tracks “Just Like You” and “Worms.” “Just Like You” details a dream where the narrator’s life is filled with stability: wife, house, dog, friends. While briefly longing for that reality, ultimately he pridefully rejects that lifestyle: “thank God I didn’t go to school and thank god I didn’t end up just like you, some kind of psychopath.” Then there’s a kind of balanced acceptance represented in “Worms”: “the same worms that eat me will someday eat you too.”

The band is at their peak when providing dark comic relief, like with “Shrimp Shack,” which visualizes Murphy’s character as he playfully takes a towel soaked in Formaldehyde to get high before becoming intimate with a mother (simultaneously mine and yours) in—you guessed it—a shrimp shack.

Despite their comedic value, the songs of Viagra Boys honestly speak about drug addiction in a uniquely immersive way that’s not often seen in punk. “Amphetamarchy” is a six-minute instrumental that emulates the feeling of being on an amphetamine binge, directly followed by “Up All Night.” These songs immerse the listener in the perspective of the narrator as he stays up for days at a time, compulsively taking amphetamines in order to build a machine, convinced he will get the Nobel peace prize for modern engineering. The song breaks down in deranged saxophone notes as the narrator spews out slurred nonsense, in an imitation of the narrator losing his mind from amphetamine psychosis.

The band’s two EPs Call Of The Wild and Consistency of Energy both carry that same energy they would implement on Street Worms by using darkly comedic imagery about not so comedic situations. For example, “Upside Backwards” puts the listener in the narrator’s perspective, who, after smoking a laced cigarette with a mysterious woman, gets thrown into a nightmarish psychedelic trip. The trip never ends and the narrator’s body transforms into a chair all while occasionally slurring words and gibberish throughout the song.

“Research Chemicals,” from Call Of The Wild, descriptively lists all the negative side effects that come from taking a synthetic amphetamine that the narrator had purchased online and has to administer through his ass. The satire is very real and anyone that has ever taken research chemicals will assure you that this song accurately serves as a grave warning.

The song “I Don’t Remember That” satirizes the addict mentality and even gaslighting to an absurd extent. Murphy, in character as a man confronted by people that have dealt with the aftermath of his substance abuse, completely denies their accusations by exclaiming “I DON’T REMEMBER THAT!” Meanwhile in “Can’t Get It Up,” our narrator tries to explain to a woman why he can’t get an erection after a cocaine bender all night. The frustration within Murphy’s character is evident in the vocals, perfectly capturing the emotions of a man overpowered by a drug addiction that has, ironically, stripped him of his masculinity.

Viagra Boys’ entire catalog is deeply meaningful, frightening, and vividly hilarious. Each song unravels meticulously-orchestrated character studies. Viagra Boys are not just another band spewing lyrics about the joys of getting belligerent; these aren’t sing-along songs about cheap beer or hating ex-girlfriends. Viagra Boys craft songs that speak out against the behavior that systematically puts people down, all while painting an honest picture of the disturbing effects copious amounts of drug use can have on one’s mental health. It’s a very specific picture, and one that’s hard to understand without otherwise having those experiences yourself. Viagra Boys prove themselves to be a much more important band than their comically juvenile name suggests, paving out new territories that the genre has not reached before.