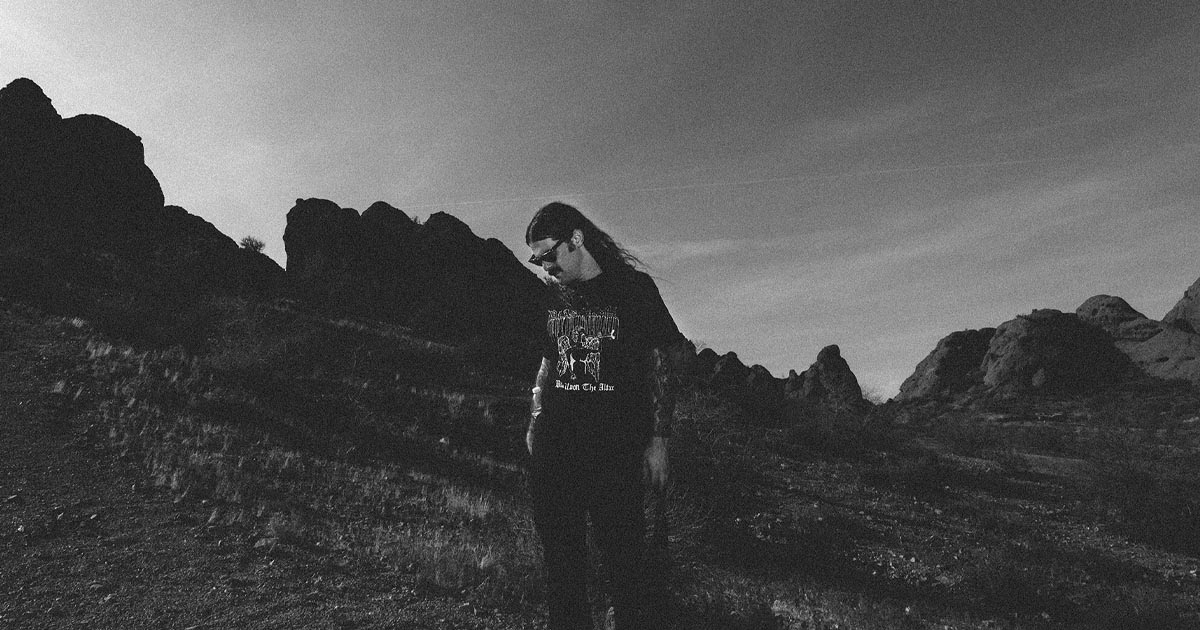 Ask Chase Mason and he’ll agree that the sophomore slump is real—just not for his band. In the lead up to the writing and recording of Gatecreeper’s highly anticipated follow-up to Sonoran Depravation, Mason and his gang of death metal thugs had in mind a record that upped the ante on everything and shot toward a melodic “stadium death metal” approach inspired by Dismember’s Massive Killing Capacity, Deicide’s Once Upon a Cross, and more.

Can a band be vile, extreme, but still melodic and catchy? Deserted shows that Gatecreeper can, and they’re poised to prove it all over the world in a series of tours that span the far reaches of the globe. With that in mind, we spoke with Gatecreeper mastermind Chase Mason about Deserted, avoiding the sophomore slump, and how he’s learned to grow and change as a musician in the years since the band’s debut.

Hard Noise: You’re coming off an uber-successful tour with Exhumed. While you’re no newbies, I’m sure that tour is still a learning experience every time. What is something you gleaned from your first massive co-head?

Chase Mason: We learn something new every time we tour. We become a better band from every new experience. Playing 30+ shows in a row helps us tighten up as musicians and learn what works in the live setting, so we can craft our setlist to be as deadly as possible.

The sophomore LP is always a breaking point, and Deserted clearly was a great step forward for you. Considering the pressure involved with following up the LP, what did you take away from this recording and release, as opposed to Sonoran?

We had a lot of pressure, both internal and external, to follow up our first record with something even stronger. As I mentioned before, we learn a lot from touring…and we toured A LOT between the two records. Aside from just becoming better musicians, we learned what worked for us as far as songwriting and were able to incorporate or elaborate on those elements in the new material.

We took our past recording experiences into account, and gave ourselves plenty of time in the studio to make sure we were 100% satisfied with each performance on the record. Overall, I think we made a strong record that we are all really happy with.

What sorts of tours are in the planning stages for 2020?

First up, we have the Decibel tour with Mayhem, Abbath and Idle Hands which hits the US and Canada. After that, we have lots of fest appearances and a pretty lengthy European tour lined up. In 2020 we are trying to play all over the world.

What are some pieces of advice that you can give a young and hungry band on the come up? What were some sources of inspiration as far as career path, etc?

I would just say to work on something related to your band every single day. Even if it’s just as simple as writing a single email. If you stay busy and are always looking for the next move, something is bound to happen. Pay attention to every aspect of your band, especially the visuals. If you have good songs, make sure everything ELSE is dialed in. Your album art, merch, photos, and every other visual element is also extremely important.

You’ve done early tours with Full of Hell and have maintained a close proximity with the band ever since. Considering their track record of working with bands on collaborative albums, is that something that is possible?

I think what works so well with us and Full of Hell is that we are two very different bands. Their collaborative albums are part of their experimental nature. We are not an experimental band. I’m not saying it’s impossible, but very unlikely!

Considering that music is such a major outlet for you now, where does inspiration come from outside of music? Do you have favorite filmmakers, artists, performers of any kind? What are they and why do you like them?

Music is pretty much the only thing I care about. It’s been that way for a long time. Any movies I watch or books I read pretty much revolve around music. Any of the art I like circles back to music in some way.

Now that you are surrounded by new bands and touring is a central part of your life, how much does modern music play a role in your influence?

I try to stay as up to date as possible with new and current music. Every Friday, I listen to at least one or two new albums that came out that day.

What are some modern bands that you appreciate and why?

Full of Hell, because they are always grinding. Blood Incantation and Spectral Voice, because they have taken very deliberate steps to expertly present their art.