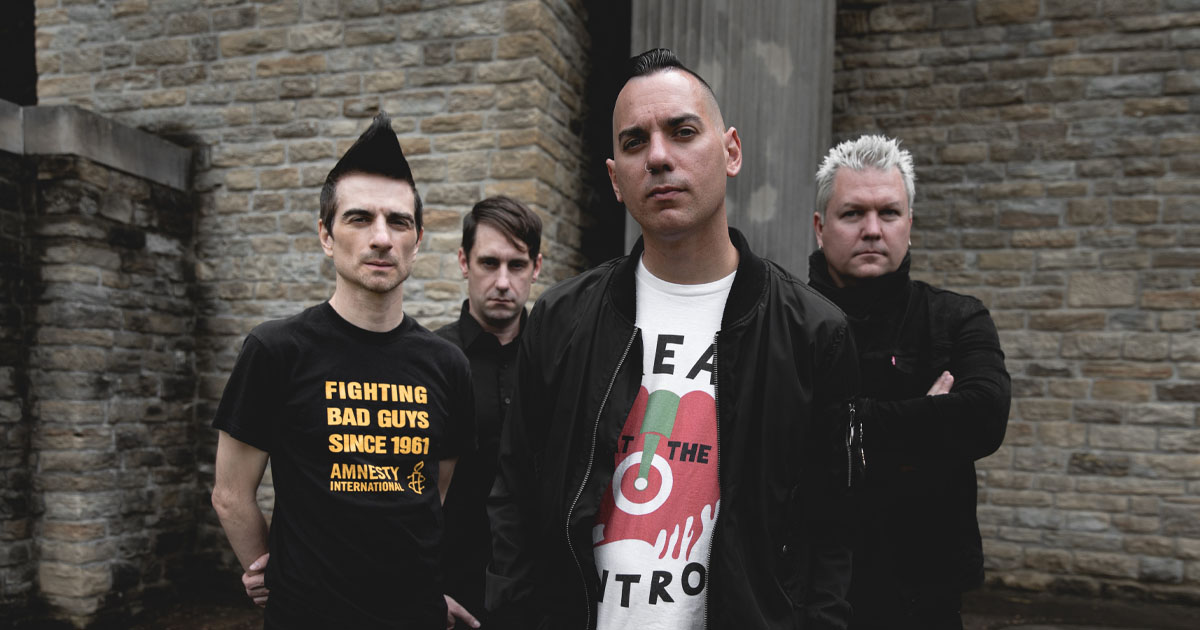 Your Neighbor is Not Your Enemy: An Interview With Anti-Flag

Anti-Flag’s newest record 20/20 Vision commences with a soundbite of Trump’s proclamation: “In the good old days, this doesn’t happen, because they used to treat them very, very rough. And when they protested once, they would not do it again so easily.” Luckily, it is not the good old days (whenever that was) and Anti-Flag remain persistent in their protest.

It would be hard to get rid of them, anyway. As a band that’s been around since the late ’80s, they’ve churned out record after record without losing a molecule of energy. When vocalist and guitarist Justin Sane repeats, “We’ll never back down in the face of the likes of you” on buoyant fourth track “Christian Nationalist,” it’s impossible not to believe him. Anti-Flag have proven themselves an unstoppable force, and a catchy one at that.

However, along the ride, lessons have been learned about just how much power music can hold and how significant of an impact it can make. “I wouldn’t try to use the art that we create to give people a space to find out who they are and a space to interject empathy into their daily lives if I didn’t think that there could be cultural shifts created by music,” bassist Chris #2 ruminates over the phone. “But I also learned pretty early on that you don’t write a song or create a piece of art on a Monday and then Tuesday the world’s different. There’s really not this direct correlation between music and social, economic, environmental justice.”

There is still a lot to be said about the power an individual has in general to make a change. “I certainly do think that if people come in contact with this community—punk rock in particular, one that’s predicated upon caring about more than just yourself—and then they take that into their daily lives, that is what changes the world,” he states. No president or authoritative figure is necessary, as long as enough people are brought together. He adds, “Change always comes from the bottom up.”

As artists, Anti-Flag do feel a moral drive to focus on these urgent political issues. #2 points to a famous quote by author and civil rights activist Toni Cade Bambara: “It is the role of the artist to make the revolution irresistible.”

There’s also a certain level of expectation for punk music, since it was a genre founded on desires to challenge the status quo and reject authoritative figures. The intersection of punk and politics is vital, yet a lot of punks argue that it is slipping between the cracks. #2, however, finds that political content has only become more subtle. “I can find the political agenda in ‘Blue Suede Shoes’ [laughs], but that’s only because I’m trying to go there,” he admits. But music doesn’t require a Johnny Rotten or Steve Ignorant type explicitly yelling about fascism for it to be political. “I find that in most people that make art, there’s something that’s a little bit broken, and we’re searching for it to be fixed, and that in itself is a political agenda,” he says, even if a song dwells on seemingly mundane topics such as lost love.

He tells me about Homeless Gospel Choir, a Pittsburgh folk punk artist, and explains: “His records are consistently about the internal struggle of figuring out how to be yourself in a world that wants you to fit in with societal norms that are maybe impossible for people with mental health issues or curious brains that see things a different way than the societal norm is.” Punk changes as politics change. Punk is not just about overthrowing authority; it’s about uplifting oppressed voices until they’re listened to and understood and accommodated.

“None of these things are radical to me,” confesses #2. “Being kind and trying to have empathy for those that are most vulnerable in our society in this time—for women, for people of color, for the LGBTQ+ community, for immigrants, for refugees, for all of these people that have sights set on them by the powerful—to care about them, and to carry them with us into the things that we do. Not just to be allies, but to be accomplices whenever it comes to the legality of people’s lives. That to me is the battle to be had, and it’s not one that falls into an idea of democrat or republican—it just falls into being kind.”

And there are two battles going on. There is constantly the fight against Trump’s outward bigotry—the innumerable times he embarks on a racist spiel, the countless misogynistic comments he makes—which is the battle that typically makes the headline and is Twitter’s focus for the day. Then, there is its shadow, which is the actual action: “He’s rolled back regulations on environmental protections; he’s passed that tax cut that millionaires and billionaires are loving,”  #2 says. Though both are hurting generally the same crowd (lower class people, people of color), it is mostly these legal actions that are doing the most damage. “If we’re gonna challenge him, we have to challenge him on all his fronts.”

Luckily, Anti-Flag are here to amplify what needs to be amplified. On “A Nation Sleeps,” Sane screams: “A nation sleeps / While another stays hungry / And doesn’t dare to dream / The success we seek / Trickles down to a gutter / Where the prison bars meet.” In the album’s lyric booklet, a large paragraph takes up the upper right corner, and it’s an excerpt from an essay called “World Behind Bars: The Expansion of the American Prison Sell.” It raises questions of the ethicality of holding people in prison cells, of money being made off of the confinement of human beings, of the typical American’s disregard for stolen futures due to propaganda.

“Justin and I try to do that for every record,” #2 says about compiling materials—essays, books, movies—to place alongside songs in lyric booklets. “We think the issues of the songs are far deeper than any two and a half minute punk song can lay out.” It recommends everything from Making Spaces Safer by War On Women’s Shawna Potter to 2018’s drama film BlacKkKlansman.

“I also think that for a band like Anti-Flag, when we’re talking about larger, nuanced political movements and this fight for equity for all people, it’s important to lay it out there so folks can understand,” he clarifies. When they’re making big statements about the state of the world, it’s important to back themselves up with credible sources. “And specifically with this album 20/20 Vision, it’s got an overarching theme. We know what the world looks like when we do nothing and allow the status quo to be the status quo. I am far more interested in what the future looks like when we attempt to shift that cultural movement in place and turn it into something more empathetic and more egalitarian.”

Because of their criticism of America, Anti-Flag are constantly bombarded with remarks that they’re “Un-American,” which is an idea that takes its own spot on the new album. “It was probably the hardest song we’ve ever written,” #2 admits, and explains: “This idea that saying something is un-American is then laying out what the antithesis of that would be—which is to be American. And America is a country founded on racism, slavery, and people taking what they want by the barrel of the gun. That’s not a history that I want to applaud in any way, shape, or form.”

It’s important to remember that the band’s name is Anti-Flag. However, no matter how deep their frustrations run and how frequent their “attacks” are, there is something inherently patriotic about criticizing one’s own country and working toward a better version of it. #2 emphasizes that what he does like about America is his own community, not some star spangled banner fantasy concept that many citizens cherish. What matters to him is not the idea of America, but the people occupying it. And the idea of America doesn’t protect them. In fact, most of the flag wavers do the opposite—they target and injure. On the song, Sane sings: “Life at 26 ain’t what she thought it would be / Now she’s waking up from the American Dream.” It’s the reality. America is not some Promised Land, it is a land of broken promises, and it will remain this way until policies are changed and systems are shifted.

A reason that Anti-Flag haven’t been interested in endorsing any candidates is because their main goal is to avoid division. “I think that as the band stands, it’s our job to make commentary on what’s happening. Not to put the community that surrounds the band into a place that they may or may not like,” #2 explains. Their mission consists mostly of exposing the patterns of history. He calls to mind the 1990 protest movement that fought against WTO, world bank, and globalization, and the way millions of citizens in America, Germany, and the UK lost jobs when “factories were shipped to another part of the world where they could exploit and squeeze workers like a lemon,” he spits. “And then, politicians came to power, like Boris Johnson in the UK, AfD in Germany, and Donald Trump in America, and they went on TV and said, ‘Your neighbor is your enemy. The immigrant, the refugee, that’s who’s causing your problems.’ Not the corporation that has: A) destroyed the planet, B) stolen the labor force, and is exploiting people on a minute by minute basis.”

Anti-Flag wants you to love your neighbors and hate corporations, which really could be the definition of punk in a nutshell. #2 admits that his candidate of choice is Bernie Sanders—which makes sense in accordance with the album’s proclamations—but he is quick to add: “I also think that if he does win, it’s our responsibility to hold his feet to the fire and keep him accountable for the things that we want to see happen in our world.” No matter who the next term goes to, Anti-Flag will be here to shine a spotlight on whatever’s in the dark and to fight for all groups to be elevated to the same level.