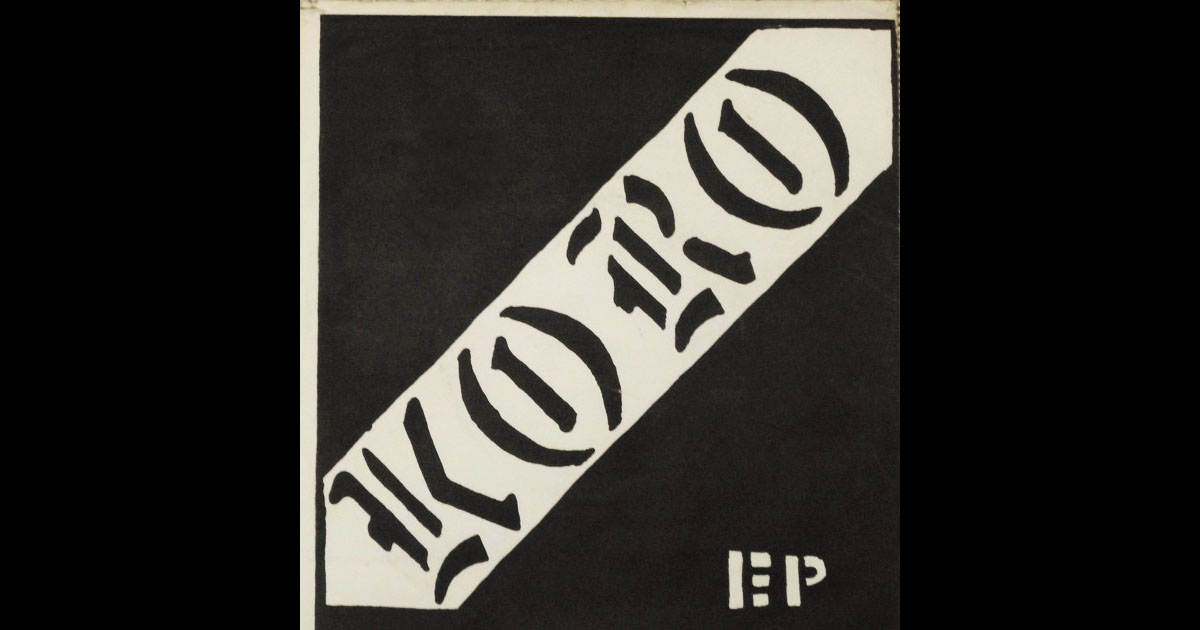 “We wanted to put out a record faster than the Circle Jerks.”

That’s how guitarist Dave Teague, in a gravelly voice accented by a disarming Southern twang, describes the mission statement of Koro, the hardcore punk band he formed in the early ‘80s with his friends in Knoxville, Tennessee. Koro succeeded and the proof is in their scalding self-released 1983 EP, simply titled EP. The maelstrom carried over to their live shows, where even the group they were trying to outdo were impressed. Teague notes that Koro was invited to tour with the Circle Jerks after opening two Knoxville area shows for the West Coast legends. “There was no way, though,” he laments. “We were still in high school.”

Indeed, Koro was comprised of mere lads, most of whom attended Bearden High (vocalist Scott Semple went to Farragut, approximately 20 minutes away). Another motivating factor behind EP was the belief it would somehow impress Bearden’s principal. These teens harbored a common fantasy amongst musicians trapped in the stultifying American education system: they wanted to perform for their fellow students during Senior Day. Believe it or not, Koro’s dream came true. The band was added to the event schedule and on the afternoon in question they set up their gear next to the football field. Bucking the conventional narrative slightly is the fact that these punks were not absolute underdogs. “People weren’t into this punk rock thing,” Teague explains, “[but] we were more popular than the jocks. All the cheerleaders hung out with us.”

The life span of Koro was less than two years, but EP became a legendary release in hardcore vinyl collecting circles. Only 500 copies were pressed, and it isn’t just the scarcity that makes this seven inch so sought-after. The songs are incredibly invigorating, the lyrics spiked with wry humor (when they can be deciphered, anyway). “700 Club,” which condemns televangelism, is a particular stand out. “Amen, amen, we sing unto these hills, suburban tv crazies strung out on diet pills!”

This is as good a juncture as any to reveal that Koro took their name from a culture-bound syndrome delusional disorder in which a person believes their genitals are slowly retracting into their bodies. This ailment is common throughout Asia (in China, they call it suo yang, or shrinking penis). Googling “Koro” can easily kick one down a fascinating psychological rabbit hole.

Over the years, some listeners have doubted the legitimacy of EP’s speed, believing the tapes were somehow manipulated. Such an idea is not far-fetched in a sub-genre where the fastest band was always the most exalted. There have also been many occasions, across all of music, where post production errors have accidentally adjusted recorded music’s pitch and speed. A blunder during the mastering process for Billy Joel’s 1971 debut Cold Spring Harbor increased the tempos and thinned out Joel’s voice, infuriating the singer. When the 1980 Bad Brains LP Rock For Light was transferred to compact disc in 1991 the pitch was moved up by one half step; Bad Brains bassist Darryl Jenifer theorized the cause was an unchecked problem in the original recording or the “junk system” producer Ric Ocasek used to create the CD (Ocasek threw the equipment away as soon as the Rock For Light transfer session was over).

In 2006, Sorry State Records released Speed Kills, a platter of alternate Koro recordings (“That was done without everybody’s consent,” Teague reveals, “but everything’s patched up now”). The name Speed Kills and the album’s more lethargic pace only added to the debate regarding EP. Teague admits he’s asked regularly if Koro altered the speed of their debut. He’s quick to point out that people thought the same thing about both the Circle Jerks and the Dickies, the latter of whom Teague wound up joining after Koro. Asked point blank if EP was sped up, Teague leaves a healthy pause of either dramatic license or genuine annoyance before answering.

This firm denial will probably do little to quell amateur detectives and conspiracy theorists who want to prove what they hear beyond a shadow of a doubt. And there are, of course, zealous Koro fans who don’t care one way or the other. And why should they, or anyone? Hypothetically speaking, is a punk rock band speeding up their tapes much different from Beck slowing down and distorting his vocals so they sound like they’re dripping out of a Mrs. Butterworth bottle? It’s aesthetics over authenticity, which isn’t necessarily high crime in art. We’re tackling a moot point anyway — Dave Teague says the rumor is just that. We take him at his word.

Teague played with the Dickies for 20 years beginning in the late ‘90s, although that band’s lapsed studio ethic means he only appears on two of their albums, 1998’s Dogs From The Hair That Bit Us and 2001’s All This & Puppet Stew. More recently, the guitarist was a part of the goth act Dead Girls Corp. who last year released a full length called Bloody Noses And Hand Grenades. Teague, now firmly a Californian, occasionally makes trips back to Tennessee for the expected milestone events (weddings, funerals). He keeps in touch with his Koro pals.

“There are other tapes,” he says regarding potential future Koro output. “I think there are a few songs left that haven’t been released…I’m glad people are interested. It’s flattering.”

“I was on tour once and I went into some record shop…I was flipping through a bin and I found the Koro record in there. I said, ‘Here’s my record.’ The guy working there was like, ‘What do you mean?’ ‘I was in Koro!’ He flipped out. People really go nuts for it!”