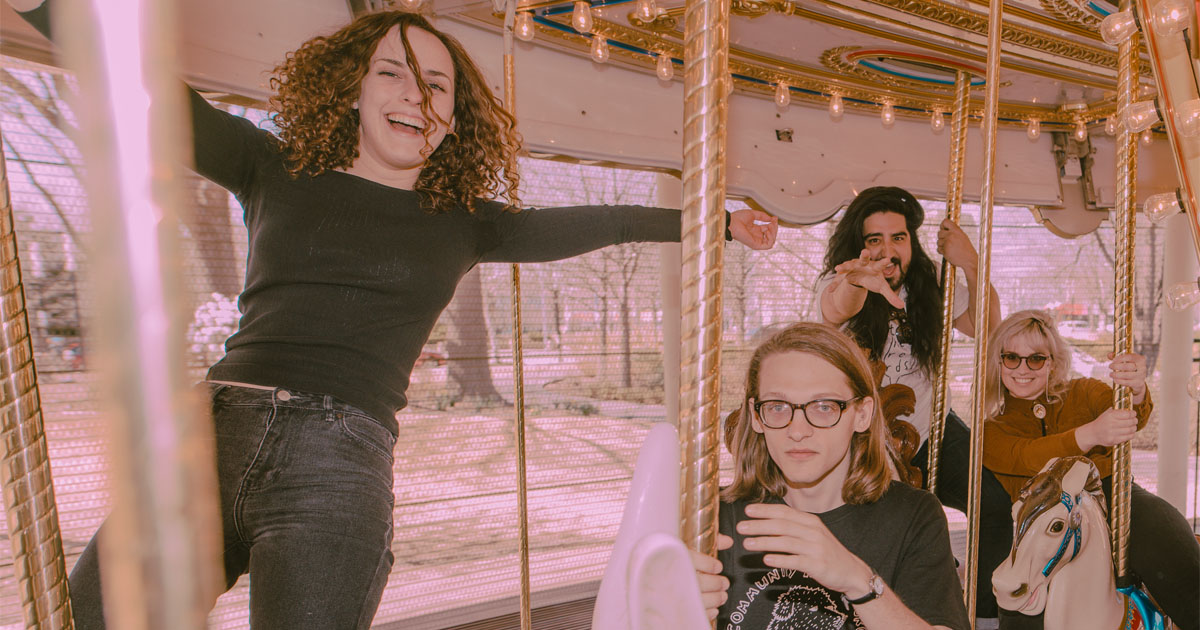 Pool Kids are a beast of a band. A smooth blend of pop and emo with a big math influence, they craft songs that are equal parts cozy and chaotic, complete with sparkling guitar hooks and just a hint of late ’90s emo-angst. It’s a seamless package that makes for catchy, strong and intelligent tunes. Their lyrical content is deep and meaningful, discussing everything from the darkness of social media to our toxic relationships. From top to bottom, this band brings a heightened gravity to every aspect of their sound.

Bursting with idiosyncratic rhythm and bolstered by tender and earnest melodies, Pool Kids are hard to pin down for comparable bands. But genres be damned. The talent that oozes out of the pores of this band has garnered them industry wide acclaim. Paramore’s Hayley Williams claims that Pool Kids is what she wishes Paramore sounded like in the early 2000s. Couple that with an upcoming tour with Spanish Love Songs and pop punk darlings The Wonder Years, and it’s easy to see why Pool Kids are quickly hopping onto everyone’s radar.

Pool Kids are led by Christine Goodwyne, the band’s multi-instrumentalist and lead vocalist.  Goodwyne is a technical precision maestro who also wrote and recorded everything (sans drums) on the 2018 debut release Music To Practice Safe Sex To.  She is joined by Nicolette Alvarez on bass, Andy Anya on guitar and Caden Clinton on drums. Each member brings something to the table and informs the genre-bending sound they bring.

Pool Kids dropped their first music video this week for their song “$5 Subtweet,” a punchy-yet-technical emo track that is catchy as hell. Check it out here, and read our interview below for more about the band’s influences and what’s next for Pool Kids.

Hard Noise: How did Pool Kids come together?

Christine Goodwyne: We all met in Tallahassee. I worked at a radio station and I was handling a lot of shows. I started playing guitar when I was 12 but I never really thought I would be in a band. There were always people starting bands, but it was always a bunch of guys and they never wanted me to be in their band. I was the only girl in the guitar circle and no one cared. I remember going to see Chastity Belt and thought ‘Wait, why am I not doing this?’ I found Caden first through a mutual friend and we started as a two piece as we looked for new people.  Then came Nicolette, who I met through the radio station, and then Andy came along who had been in a bunch of bands. I wish I had some more exciting story, but really we all found each other through the music scene.

How’s the move from Florida to Chicago been for the band?

It’s been great. Right now it’s just Nicolette and me living together, and the rest of the band will follow soon. Andy should be moving up here soon. And Caden will follow. We’ve actually been a long distance band for awhile now and it’s worked really well.

You bring a lot of different styles together in your music. How does that creative process look?

Things are changing a bit now for us. On the first album I recorded both guitar parts on my looper pedal and then would write the bass lines. I would come up with all the parts and then bring that to Caden, and then he would play these crazy drum parts that I wouldn’t think would fit and then I would go back and rewrite to fit it in. The creative process was great between Caden and I. The stuff we’re working on now is different. We’re going to get everyone together and have everyone’s input in the studio.

You wear a ton of your influences on your sleeve, but you’ve combined them into your own thing. How do your influnces work on in the band?

Caden is into metalcore and all sorts of shit, and Andy says he likes a ton of different things, but all he listens to in the van is metal. Nicolette has a ton of knowledge about jazz. She’s able to bring a jazz influence to the band. We sound way different live than recorded because when it’s all the musicians together on a stage and it’s not just me, you can hear our individual influences. Nicolette has the jazzy influence, Andy brings classic metal guitar parts and Caden is blast beat city.

Since your first release, have you seen one musical style you incorporate take over others? Has the direction changed?

I like trying to find the balance between moving towards certain pop elements, but also trying to keep the same sound. A lot of people will say, ‘whoa it’s really shreddy.’ And I don’t want to lose that. But I also want to make it accessible. I don’t want to have a straight up math rock band that only musicians would like. I want to find that balance. I want us to still sound like Pool Kids, I don’t want to go in some crazy direction where people are like ‘What the fuck are they doing?’ I want it to always to sound like more Pool Kids.

You have a big year ahead of you. Touring with The Wonder Years has to be pretty exciting.

Yeah, I’m crazy stoked. We found out while we were doing our audio shoot, a huge goal of ours. We are all so nervous and excited and right in the middle of that peak excitement, Andy checks his phone and we just got an offer to tour with The Wonder Years. We were like ‘Holy shit!’ It’s a month long tour that covers the entire US.

How did the idea for a music video come about?

It’s always been something on our to-do list. We wanted to make something visual. It’s kind of odd ,because it’s a song that we released in 2018 and now it’s going to be released as a video in 2020. It’s a little bizarre, but we just felt that “$5 Subtweet” was a song that would be good for a video. We waited for a time when we didn’t have any tour or anything else going on, and we were like ‘let’s do this video thing.’

How did you decide the artistic vision on the video?

We all suggested music videos that we liked. Nicolette and I really agreed that we like the video for “Cool” by Soccer Mommy. We liked the bright colors and we decided to focus on that. We found a director that was affordable and had work that we really liked. We explained the videos that we liked and she tried to do something similar.

Where do you go from here? Big tour, new music video. What’s next for Pool Kids?

Immediately after the tour is over, going to finish writing together as group. We are also going to find a producer to work with this time. And then hopefully record as soon as possible. We would like to stick with our current label Skeletal Lightning.