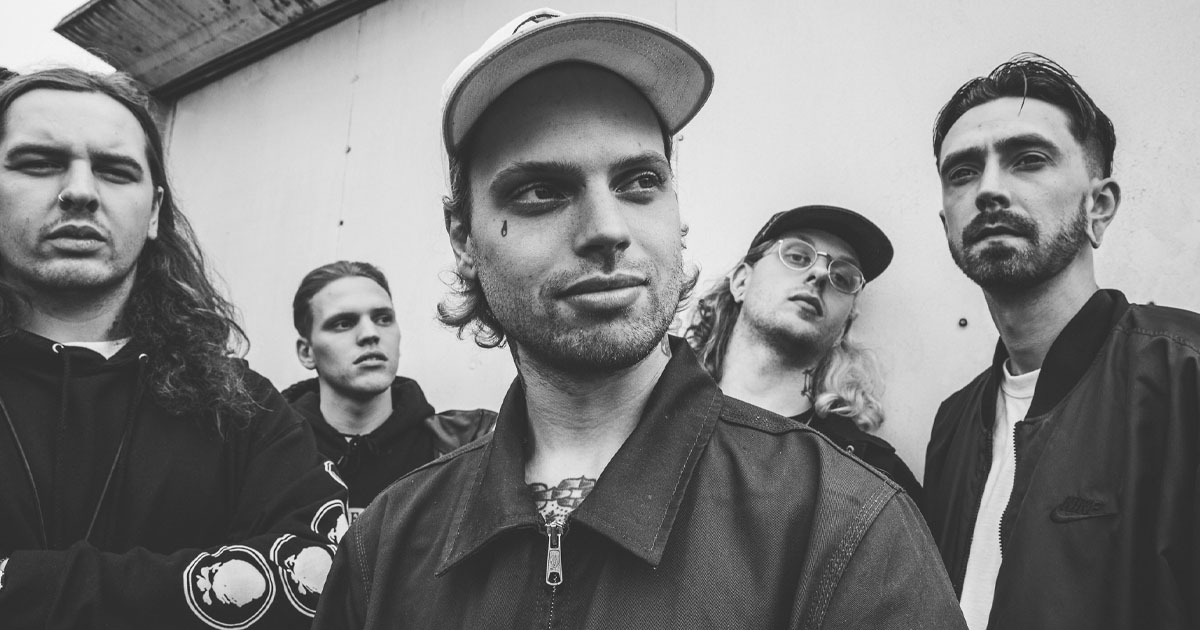 Formed in 2015, Higher Power came up as part of the UK’s New Wave of British Hardcore, which saw the rise of bands like the Flex, Violent Reaction, Crown Court, Arms Race and many more. And while many of those bands were extremely challenging within genre, Higher Power offered some of the most interesting melodic approaches and experimentalism, while still staying true to their original jumping off point.

2017’s Soul Structure LP cemented the band’s place within the US hardcore scene, coupled with several full North American jaunts. The stage was set for a new LP and a new label home—27 Miles Underwater, out now on Roadrunner.

Your face, your face, it is the same

And your body remains

But your imprint starts to fade

While the track and its lyrics have nothing to do with the band specifically, in some ways there are parallels with Leeds-based Higher Power—a young band evolving a new sound, shedding their previous one for something more fresh in the current landscape of heavy music. With 27 Miles Underwater, they’ve achieved it: a groove that lends itself to NYHC favorites, while touching on classic ’90s alt and metal tropes by Deftones, Quicksand and more. Better yet, while Higher Power’s influences are worn proudly, the band blends them all into a singular melange that is distinctly them.

With the new LP finally in the hands of the public and the band about to pounce on the US, we spoke with frontman Jimmy Wizard about the making of the LP, the UK scene and what we can expect from the band in the coming months.

Hard Noise: Higher Power was part of what was once called the “New Wave of British Hardcore,” with bands like the Flex, Violent Reaction (which you were also a part of), Arms Race and others. Many of those bands have fallen by the wayside in the years since. HP aside, which band was your favorite from that era and why?

Jimmy Wizard: I’m going to say The Flex. They were always the most fun live band that the whole gang came out for, just good times.

It’s incredibly interesting that both the HP LP and the Chubby and the Gang LPs are hitting at the same time, especially considering you played together in Violent Reaction. Do you still talk to Charles, have you heard the LP, and what are your thoughts on it?

Yeah, it’s so weird. I was actually thinking about this the other day, how we are both in the U.S. at the same time touring and still making music in completely different ways. It’s so cool, we still see each other from time to time.  We have actually been listening to Chubby and the Gang a bunch in the van. Ethan has been spinning it a lot when it’s his turn to DJ, it’s so good! 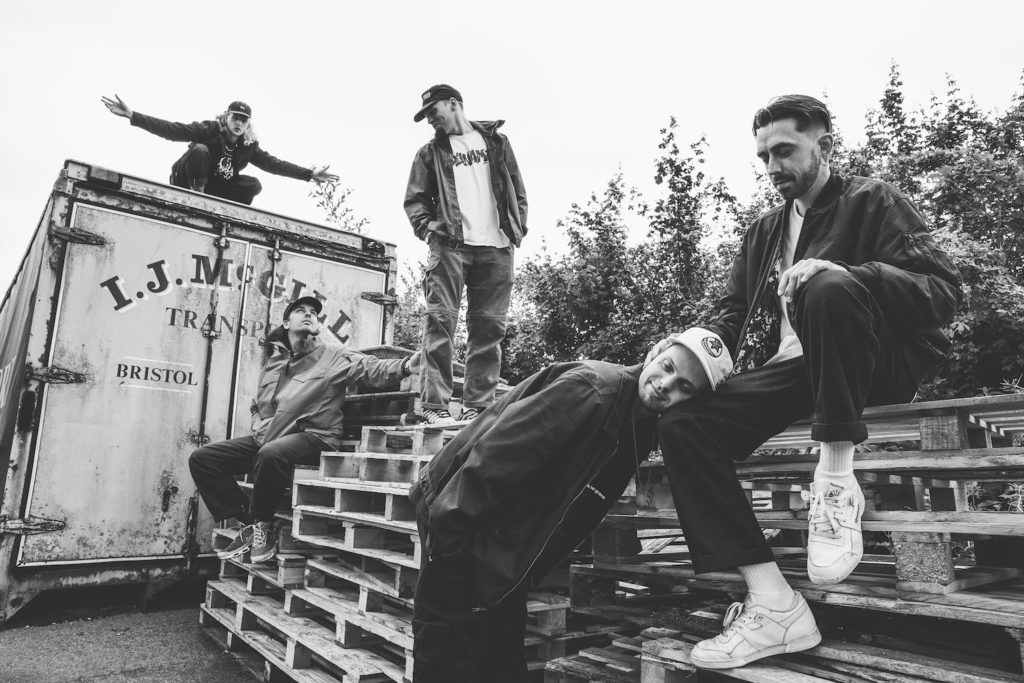 Obviously, there aren’t a lot of cases of breakout bands in hardcore that don’t originate in the US. That said, what are some musical traits that make you distinctly British?

I don’t think it’s so much the musical traits we have, but being from England I definitely feel hungry to work hard and break out of the UK to show it can be done. I would say Oasis is definitely an influence on our music, but they are one of the biggest bands in the world so I’m sure that’s obvious.  I guess growing up hearing bands like them, Feeder, and Ash, who made radio friendly rock songs with super catchy choruses, has stuck with me in my musical tastes. I have always been obsessed with good choruses and melody.

Since you are from the UK, please comment on this theory. In places that have established movements (think NYHC or SF thrash or NYC rap, etc.), the willingness or ability to test the outer limits of that genre, and truly come up with original ideas and concepts, are limited due to a sense of reverence for the scene’s history and originators. Do you feel like that’s true? Thinking back on your process, can you think of anything that might make a strictly-by-the-books NYHC fan cringe with regard to your creative process or the making of the LP?

The limits set by saying you are just trying to sound like a certain era or scene is something that I have always wanted to avoid with Higher Power. I have noticed certain limitations in it for sure.  I just don’t see any longevity in it, unless you are one of the founding bands of that sound or era. I think the whole process of this band would make a by-the-book NYHC fan cringe [laughs]. We have clean vocals, an acoustic song, and we recorded it with a producer who has recorded some of the biggest commercial rock records in the world, so it’s a good job that we are not trying to make a record to please that kind of person. I just wanted to make the best sounding record I could whilst trying to push myself creatively with no ceilings, leaving room to grow with every release with no expectations or limitations on what we can do.

In the making of the new LP, what were some things that you wanted to change about the previous LP and why? How did those changes manifest in 27 Miles Underwater?

We mostly just wanted to change the working process, like all knowing the songs and having played them together—like really practicing them and making sure we knew exactly what every song needed.  Before we went to record them, we spent a month doing pre-production before recording, just playing together and getting to know what everyone is doing and critiquing everything each other is doing. We also really pushed ourselves to write better choruses, add more of the melody that we flirted with on “Soul Structure,” but keeping the heavy parts without having them there just to compensate for a melodic part. Like, when we recorded “Soul Structure,” no one had heard what I was going to be singing on most of the tracks because I was playing guitar or bass at practices.  Now I listen back and I’m like, “well I would never do that live” or “that part doesn’t even fit with the rest of the song, it’s just pieced together in the studio.” It was nice to be in a room singing the songs with everyone and demoing things as a whole band to listen back to and get a sense of what it sounds like.

What are some specific hallmarks that you had in making the new LP? Maybe that’s “I want this snare sound from this record or I love his guitar tone on this LP, etc.” Why?

When we first met with Gil we actually made him a playlist of bands and records we loved sonically.  Everything from the raw hard sounds of Life of Agony, Cro-Mags and Quicksand, and then shift to snare drum sounds from Go West and Phil Collins.  I love the way Chino from Deftones uses effects on his vocals and the layers of vocal tracks Layne would do on Alice in Chains songs.

What are some recent books that you’ve read or films that you have seen, and how do they apply to concepts or ideas that are on 27 Miles?

I actually hardly ever watch films, I don’t have the concentration. But I’m real into reading. I read a lot into the 7 Year Cycle Theory before this record, that’s where the concept for 27 Miles Underwater comes from.  I felt like being 27 years old was a time in my life where the most significant changes happened with in all aspects of my life. I felt like I had built this world from being 20, 21 years old and it was all starting to unravel at 27.  I was transcending the life and the person I had been for all those years. The underwater part is just a metaphor for being inside your own head, because inside there you are disconnected from what’s above the surface, very much like being underwater.

With your short string of dates coming up, do you have any larger ideas for touring in the near future?

Yeah, the first two months of this year we are on tour doing a full US run with Life’s Question. We just finished up the west coast part of it with Take Offense and Drain, and then we go straight from this back to Europe to tour with Beartooth and The Amity Affliction.  We are just currently putting together summer runs with the festival offers we have, and we want to do our own U.K. headline tour somewhere between all that. We are talking with some friends out in Japan about going over there, as well. We are trying to tour as much as possible and go to as many new places as we can this year.

If cornered, you have to defend your favorite hardcore LP of all time. What is it and why is it so important to you?

It’s got to be Age of Quarrel by Cro-Mags. That record IS hardcore. It attacks you, it’s fast and aggressive, but it also has so much groove and dynamics. You can hear its influence in pretty much every hardcore band that came after in some way.