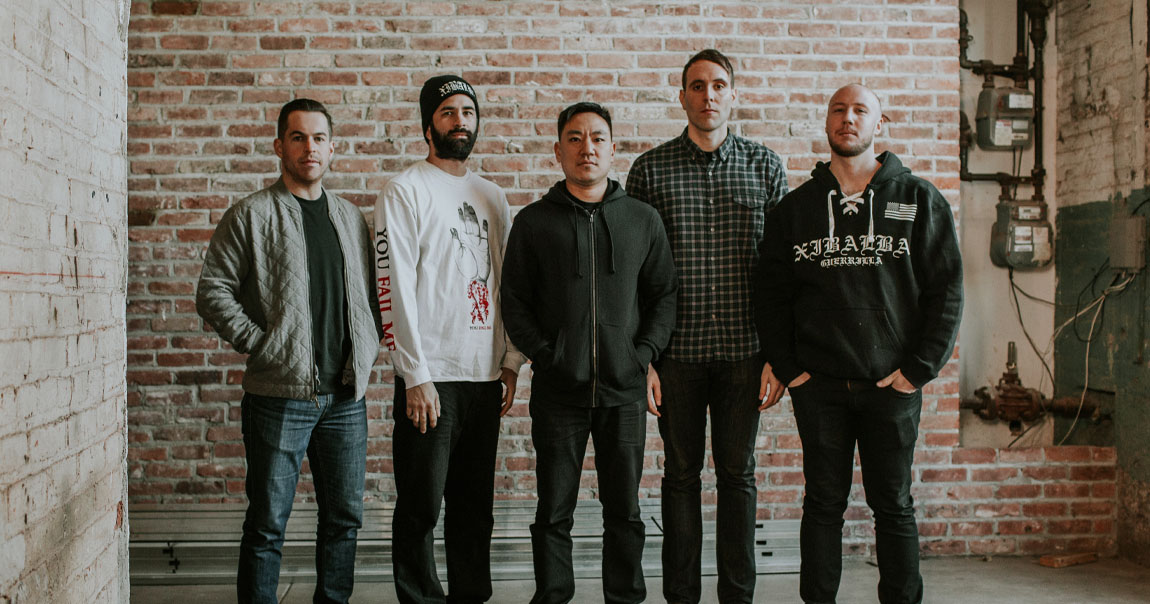 Creeping up on three years since the release of Incendiary’s now massive favorite Thousand Mile Stare feels like an eternity—not so much in length since the release, but in the level of achievement in the period since. Legitimate titans on the modern hardcore scene now, Incendiary is filling massive rooms on both coasts, playing sold out shows around the globe, and headlining major plays like Sound & Fury. And yet, somehow, the snowball effect seems to get larger and larger with every passing day.

Starting in 2007, Incendiary was born in the fertile Long Island hardcore scene and grew up looking towards bands like Indecision for direction and grinding out shows in and around the Northeast before expanding out further. Though the band has always been a serious endeavor, all five members maintain day jobs as their primary focus which, as the band’s stellar output and reputation for livewire gigs has grown, has only made their fanbase more and more obsessive.

With all that in mind, we caught up with vocalist Brendan Garrone to see what the band has been up to, their not-touring touring approach and whether it’s benefitted them, and getting “rockognized” at work by colleagues. The results of Hard Noise’s conversation with Incendiary is below.

Since the release of Thousand Mile Stare, you’ve done strategic strikes around the globe. What are some of the most memorable gigs and why?

I like “strategic strikes!” That is indeed how we view it. Yes, we have been lucky to play some incredible shows on the heels of our last record. Two in particular stick out to me. First, our London show in 2018 at the Underworld blew us away, from the attendance to the overall energy/reaction. We have been consistently playing the UK for years, and it felt so good to headline what I would consider a legendary venue.

Next would be, more recently, our show in LA this January. We have had a pretty special connection to LA hardcore, starting with our friendship with the great Xibalba. The LA show was not only our largest headlining show ever, but it was all Closed Casket Activities bands, which felt so fitting as CCA has been an integral part of Incendiary for close to 10(!) years now.

Considering the growth of your band, do you think the fact that you haven’t traditionally toured has actually been a positive for the band overall?

The most loaded of questions, haha. The short answer is no. We have turned down countless opportunities that clearly would have significantly grown our “career,” and just missed out on a lot in general. Do I think not playing the same cities every year creates some more demand? Sure, but to be clear, the way we operate is not a “strategy” or plan. We made the choice to not rely on the band for putting food on the table quite some time ago, when things were admittedly different and the band was in a very different place. That is a decision that we have based our lives on, without any clue that things would come as far as they have. 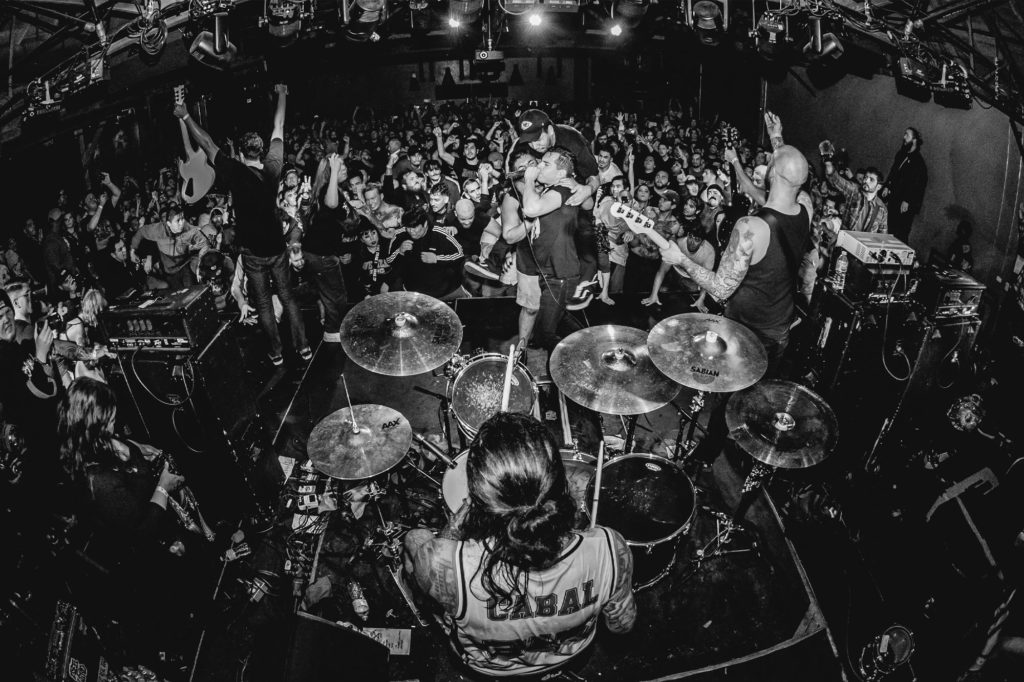 A lot of bands start with the intention to tour, hell,  I think some bands start just to tour, that “Get in the Van” mentality. And all of that is totally cool. For whatever reason though, that was never in my head.  When I think of the mindset I was in 12 or 13 years ago, I was so wrapped up in the scene on Long Island that having a band that was actively playing shows with our friends was really my only goal.  That’s really what hardcore meant to me and still kind of does. I never associated this type of music with a “career.” I guess I always related to the guy pulling up to the gig with the drums in the back of his car more than the kid wearing 50 tour laminates on his keychain, haha.  That is what I was used to growing up, and I think the fact that Long Island had so much going on probably shaped my view of how to do a band.

Getting back to your question about the “positives” of this way of doing things, I can say that it does feel sort of liberating to not have to worry about some of the politics that inherently come with the business end of music, whether it’s jockeying for a slot on a particular tour or having to rub elbows with the right people. We truly do whatever we want and can be 100% earnest about what we do because there really isn’t an end goal. Every show still feels special. For a lot of reasons, I am not sure how sustainable a 200-show-a-year Incendiary would actually be, so perhaps the biggest benefit of how we operate is that we still exist at all.

You guys all have day jobs and consider the band to be more than a serious hobby, but not something to put into full gear. Are your coworkers aware of your second life, and have you dealt with any culture clash over the years?

I think it varies by band member, but at this point it is close to impossible to hide, not that we are necessarily trying to. Almost everyone thinks it’s cool but are clearly confused by the whole thing and few grasp how serious we take it and the extent that we do it. Even though they may not totally understand it, the people close to me have been extremely supportive.

There have been a few instances of getting “rockognized” in front of coworkers, or by coworkers, and that can be kind of awkward, but I don’t think any of us really care anymore. A bunch of our coworkers and friends dig the music, but overall, Hardcore is super weird to 98% of people so I feel like once most folks actually hear the music it shuts the conversation down, haha.

Considering the growth of hardcore in the past decade or so—where Code Orange and Turnstile are drawing some of the biggest crowds ever, not to mention the recent massive Have Heart reunion—do you ever think hardcore will reach a truly mass audience? Filling arenas and such?

No, I honestly don’t. At the end of the day, there are people who go see a hardcore show and think “I don’t get this” and that group, to me, will always be orders of magnitude larger then people like us who see it and get that feeling in our chest, that “spark” as I like to say, where you just connect with the energy and urgency of the music for whatever reason. Its weird fucking music at the end of the day.

With regard to bands specifically, there is an inherent balancing act between trying to evolve your sound while staying true to the elements that we identify as characteristic of hardcore music and it is virtually impossible to navigate. As a band grows, things like songwriting and vocals become more and more important, and those areas are difficult to take to the next level. I would say Turnstile have done that masterfully. I would caveat all of this, though, that I do think people are more open minded with music than ever, so it gives hardcore bands with real songwriting ability a real shot to grow.

The other thing is that it is infinitely harder nowadays for music like this to reach a broad audience.  Everyone knows how much the music industry has changed, but even something like MTV going away has a massive effect on a band’s reach.  This is why the cost of an ad in the Super Bowl goes up every year. You are paying for mass reach, mass attention.  There is a reason why the same few heavy bands have to headline festivals; they came up at a time where they could be exposed to people beyond diehard music fans.  Every single kid in your high school growing up knew Korn and System of a Down, but there aren’t heavy bands reaching the mainstream now to that extent.  I’m personally of the belief that there likely will never be a band as a big as, say, Slipknot, ever again. Music is now tailored to the individual more with things like Spotify algorithms, Youtube recommendations, etc.  We’ll see,though. I hope I am wrong.

You’ve played with virtually every aggressive band under the sun, but who is one that has eluded you that you are a fan of? Why?

Great question. There are a few that come to mind, but I would have to go with Converge, just never happened. I’d also say Glassjaw for obvious LIHC reasons. That came close a few times, but I want to make it happen.

Are there any plans for a follow-up to Thousand Mile Stare?

There’s nothing concrete to share at the moment, but I think all five of us would like to get something out.

Incendiary is going to go on a 30 date tour in the US. Who would you invite to hit the road with you and why? What are some young bands that you are paying attention to?

I’m going to go with, in no particular order:

Never Ending Game-  put out my favorite hc release of 2019

Sanction- LI Metalcore titans who have been killing it.