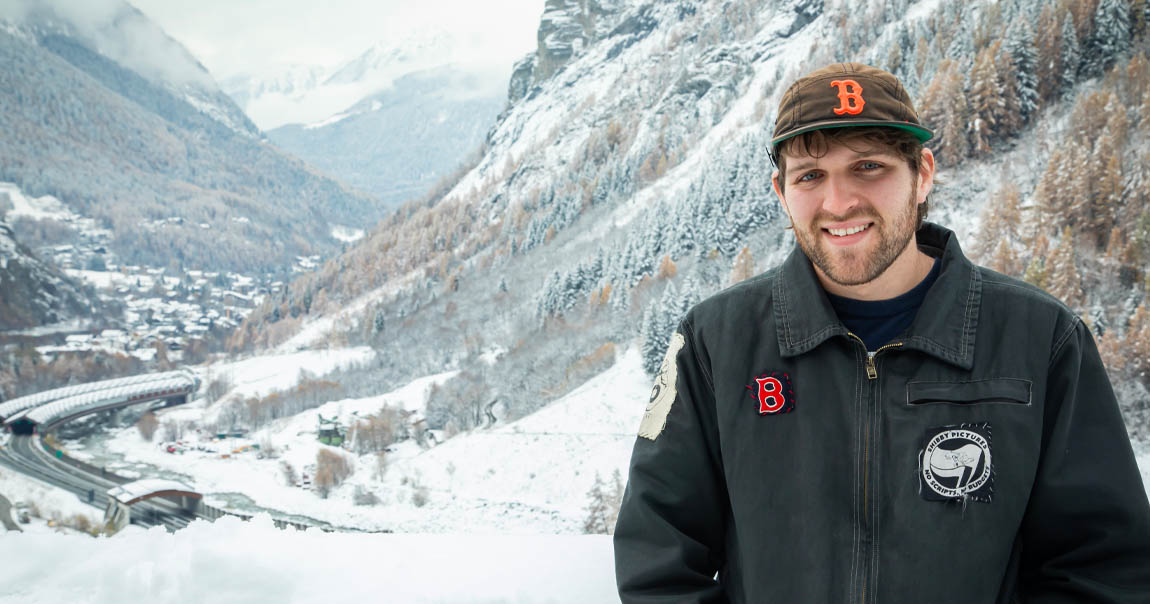 Shibby Pictures is the DIY film production company of Jak Kerley. Described as “the gritty, confused style of filmmaking that no film festival is interested in hosting,” Kerley has filmed and produced music videos for Leftöver Crack, Days N Daze, and Mischief Brew without being bogged down by things like crews, equipment, or funding. He travels across the world screening his works anywhere from beaches to batting cages. His most recent work, Good Ol’ Punx, shows Kerley flexing his comedic muscles. The series reveals the funny side in the struggles of getting band members  out of bed in time for a show, promoting your music, and going to a show alone.

Hard Noise is proud to premier episode three of Good Ol’ Punx. Check out the video here, and read on for our interview with Jak Kerley, where we discuss his work in the world of punk music and his DIY ethos.

You’ve filmed a lot of music videos, most famously for Days N Daze. Did your experience in filming music videos inform these shorts?

In a way, yes. All of my films are just one giant timeline to me. And I make sure that each video I make is better than the last, regardless of whether it’s a documentary, short film, or music video. All the time I get asked which is my favorite video I’ve made, and the answer is always whichever one I am working on, because its the freshest and most exiting one to me, and the one that I am making with all of my previous experience informing all of my decision making. Each video is the culmination of everything that came before it, and will hopefully pale in comparison to the video that comes next.

These shorts feel loose and lighthearted in a really fun way. What was the process like filming them?

The process was exactly that! I film all of my narrative stuff the same way: I set up the scenario, give the actors a starting point and finishing point, and how long they have to get there. I usually have a rough outline of things for them to say, but as we burn through takes, the personality of the actors begins to take over, which is why I cast the people I do to begin with. I know if I cast creative and interesting people, let them be themselves, then not only will the film be good, but it will be authentic.

What experiences did you base these shorts around? Do you think they’re relatable for the punk community?

A lot of these are based off of my own experiences and the experiences of my friends. Being on the road for extended periods of time can lead to interacting with so many different people and situations, yet it’s always interesting that there are threads that connect people together through these experiences. Anyone that’s ever gotten into booking shows has gotten an annoying booking email from some normie band from Austin or something. Everyone that’s toured has had to deal with a show getting cancelled at the last minute. And everyone that’s crashed at a stranger’s house has had to deal with a disgusting bathroom.

How do you want people to feel after watching these shorts?

For the people that relate to it, I want them to feel seen. There’s so many annoying things that an underground band has to deal with, I want those that relate to it to see it and know they’re not alone. For the people that don’t go to shows or tour, I think it acts as a fun yet true peek into our world of how exactly and underground artist operates, and what they have to deal with.

Broadly speaking, many people would consider these comedic shorts. In your view, what do punk rock and comedy have in common and what can they learn from each other?

What a fantastic question. They are both a way we deal with an unjust and frustrating world. They act as both a coping mechanism and an escape. They’re both reactionary and a way to deal with the things around you that you feel overwhelming or unchangeable. We hope our art will produce a better world, but settle for us to feel better, even if it’s only fleeting. We find friends, we create, we laugh, and we hold onto it as long as we can.

I think a super underrated aspect of art is the community around it. There’s something to be said for art itself, for sure, but there’s also something to be said for the connection you can form with another person over that art. Everybody has made friends with someone based solely on their taste in music, movies, or TV shows. Without art to form those connections, the world would be a lot more fragmented place. And I think that’s something they can try to learn from each other, that sometimes the connections you form with people and the community you build around your art is just as important as the art itself.

What makes you laugh?

The things that make me laugh are the relatable things. Maybe not the most over the top, cleverly written joke, but the subtle little quirk in a scene of a movie that the director absolutely nails. I think that life itself is just so beautiful and interesting. That’s why in these shorts, a lot of the comedy isn’t laugh out loud funny, but I think you really can just sit there and be like, “Damn that’s so true.” I’ve never really considered myself a particularly hilarious person, but I do take pride in the honesty I can offer viewers.

You’ve said that you seek to “tease out the unusual in the everyday.” How do you see yourself doing that in your work?

I think the best way to go about that, and maybe people will disagree with me, but it’s making plans. Making plans to be doing something different every day. If you look at my calendar on my phone, it’s filled with shows, shoots, movies, trips, seeing friends. I hate having downtime. I’ve found that if I pack my days as tightly as possible, it’s the easiest way to avoid falling into boring habits. It’s so easy to do the same thing every day, eat at the same places. Life is so short, and I see so much value in every single day that I never want to let a single one go to waste.

There’s a lot of anxiety and frustration underneath the gags in these shorts. Despite those feelings, what makes you come back to the punk/DIY community?

I think you answered the question yourself with that last word: community. Nobody wants to be alone, and it’s fantastic to find solace in like-minded people surrounding you. The only other option for me was to work in the film industry, but I felt it was difficult to get passionate about someone else’s story when I have my own that I want to tell.