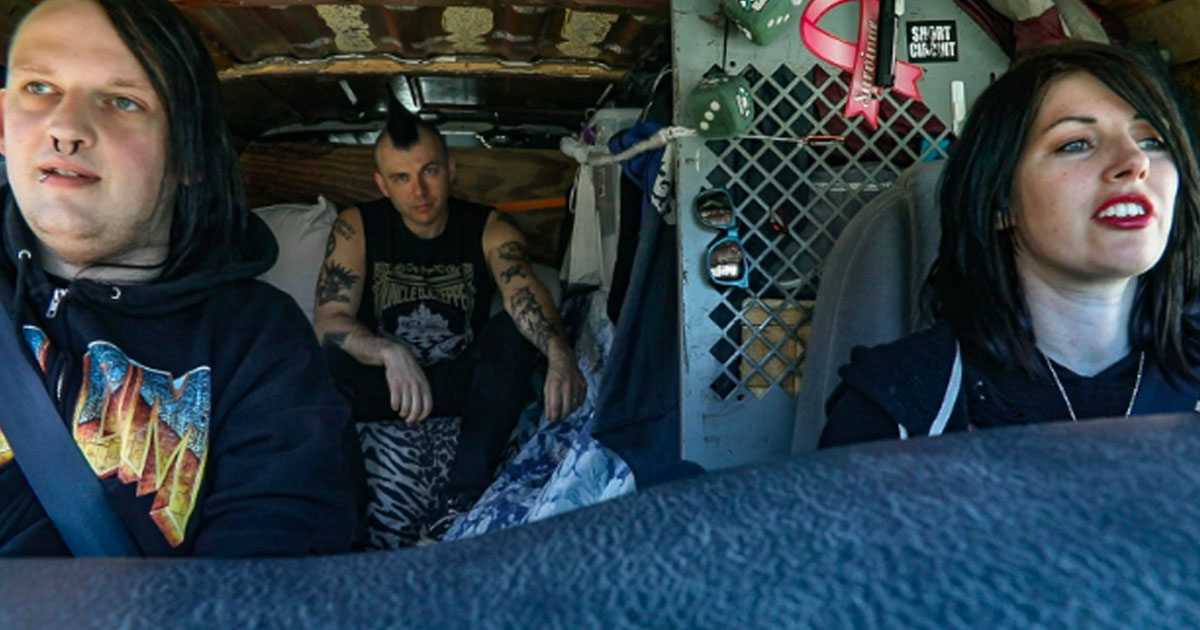 The Shibby Pictures webseries Good Ol’ Punx showcases an all-too-real look into the funny side of the punk scene. The series also features bands like Some Kind of Nightmare—the San Diego-based punk rock power trio that’s been voicing lower-class concerns with their hell-raising sound since 2006. The latest episode details the arduous journey a band must take to a show, and the farce it quickly becomes.

Hard Noise is thrilled to premiere Episode Five of Good Ol’ Punx. Check out the episode below, and read on for our interview with Molly Mess of Some Kind of Nightmare about the real-life incidents that inspired the episode and the behind-the-scenes process.

Was this episode based on a true experience? Do you think it’s relatable?

Some of the parts were based on true stories. There have been several times where we’ve dealt with a lot of issues and almost to the next town, only to discover the show had been cancelled. There was a time when the sound guy was in jail, but the show wasn’t cancelled. It’s definitely relatable in that sense. I’m sure the majority of bands have dealt with shows being cancelled at the last minute.

Jak was really fun to work with. Very nice guy. We misunderstood his message! [Laughs] We thought we were meeting up for some sort of interview. So it was a surprise when he explained it was a sketch comedy series. We had fun working with him.

A lot of your music is sonically heavy, but it has a positive and motivational message behind it, like on the track “Germinated.” How do you strike that balance?

We play what moves us and what we like to listen to. I’d rather give people hope through heavy music than to put out a bad message or a fake message with upbeat music. We really do focus on overcoming struggle and bringing out awareness of different issues. We write what’s real to us. One of our really good friends put it best: “I wanna play music that would move the 15 year old me.”

What non-musical art are you into right now?

I’ve always been into writing. I write pretty consistently. And I’m not sure if you’d consider yoga an art? But I really enjoy yoga pretty much every day.

What’s next for you?

We just finished recording our new album Transplant Pulse, so we’ll be releasing that in a month or two. We’re aiming to release a music video as well. We will definitely be continuing to live on the road and keep touring.

Published in Culture and pREMIERES