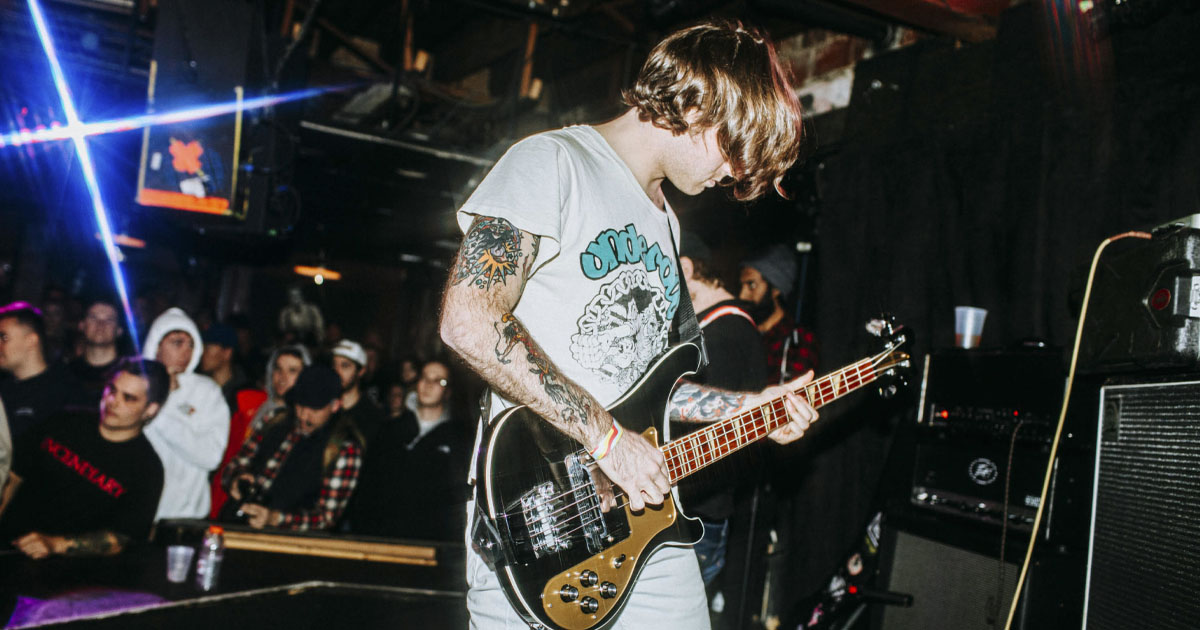 The Fight on Hardcore Punk, Hanging with Creed and Keeping it Socio-Political

Bubbling up from the fruitful Long Island scene, The Fight is a hardcore band that tips its hat to bands like Poison Idea, Broken Bones and more in addition to local favorites like Deathcycle and Kill Your Idols. Behind the four-string is bassist John Scanlon, also known as part of LI Hardcore booking team East Coast Collective. Between the band and Scanlon’s influence on the hardcore scene on Long Island and NYC, The Fight is making a serious dent in the local punk and hardcore circles, playing with bands ranging from Eyehategod to Youth of Today to Agnostic Front.

The Fight is readying a new 12″ EP called Endless Noise for new label home Triple B Records on March 18, the latest single of which is “Their New Aesthetic,” streaming below. With that in mind, we cornered Scanlon to discuss the new LP, his memories as a booker and details behind one of the most ripping hardcore punk records of the year.

What is the early history of The Fight and how you guys got together? What were shared ideals and influences?

Quinn and Dylan were in a previous hardcore band together and wanted to start a new band leaning more on UK82­, which wasn’t a thing at all on Long Island at the time. LI was more leaning towards heavy style hardcore and things of that nature. They ended up asking Lil D to play drums and then invited me to play with them as well—which stemmed mostly from Quinn not knowing how to play guitar, so he needed a counterpart who also didn’t know how to play their instrument, meaning me. Lastly, we asked our singer to join the band because he showed a very strong interest and we thought he sounded like Paul Bearer or something.

I feel like Dylan and Quinn shared the influence of UK82, where I was looking to be do something fast, straight up punk/hardcore, so we looked to a wide range of bands like Chaos UK, Broken Bones, Breakdown, Sheer Terror, Negative Approach, Blitz, etc. We definitely wanted to show Long Island kids that you didn’t have to be heavy to be a hardcore band and that you could also be “fast.” We mostly agree on all the same ideals and have pretty similar outlooks on most things.

Let’s talk about Long Island and your come up. What were the bands that really shaped you and shaped The Fight and why?

Long Island has a rich history of bands, old and new, but it’s funny because the bands that were playing during our generation growing up, like Backtrack, Capital, Incendiary, don’t really sound like what we go after besides the sprinkled-in NYHC influences. I think the bands that shaped me are different from the bands that shaped The Fight—Kill Your Idols definitely fall in the same realm as us, and they definitely shaped our band, but Long Island as a whole was so sonically mixed with bands like Silent Majority, Mind Over Matter, Neglect, Inside, VOD, and many others that have personally shaped my taste. Aside from Long Island, I 110% owe the older hardcore/punk bands from New York that really had a hand in shaping what style of music I’m into and the outlook I have on life today.

How did the alliance with Triple B come about?

I put out our first record myself and was down to the last 80 or so copies, and had the idea to hit up Sam to see if he wanted to put a few in his webstore as a sort of distro. He took 30 and they sold in a day, so I asked if he wanted to do the remaining 50 as a “limited Triple B press” which had an alternate color way. After those sold I jokingly was like “alright, you down to do our next record or what” and he was for it. I’ve known Sam for awhile, so it kind of just happened naturally as a friend helping a friend, but also just me jokingly asking him to do it…. so sorry Sam if this backfires!

Endless Noise leans heavily into hardcore punk and away from a lot of traditional modern influences. What were some of the influences going into the making of the album?

Well, to be honest, when the band first started we wanted to be more punk leaning and our first two releases were also very far removed from what was going on in hardcore at that time due to that outlook. It’s not like we were trying to get away from “modern” hardcore or anything, just wanted to make a band that followed the sounds of our influences and honestly didn’t care all that much if people dug it or not.

Also, it is important to note that “hardcore punk” and “traditional modern hardcore,” or any other branding of hardcore, is all still hardcore. It’s very apparent when bands are leaning towards one “style” than the other, but it really shouldn’t be separated, just leads to more closed mindedness and creates a bigger rift than there already is. “Punk” and “hardcore” bands should be able to play together without anyone’s egos being hurt.

Anyways, for this album we just wanted to keep doing what we’ve always been doing, while obviously progressing a bit. I think these songs are a bit more accessible to a wider range of audiences in the Hardcore umbrella. I think whether you’re a NYHC lifer, a young kid who only likes heavier stuff, or a punk who likes music that sounds like it’s recorded in a tin can, there’s probably at least a song or two on here you’d like. Hey, I could be wrong. The only thing we knew going into it was that we just wanted to make sure the production was on point, raw but still polished to an extent, which I think we accomplished.

What are some recent books that you’ve read, current social or political issues or films that you have seen and how do they apply to concepts or ideas that are on the new album?

The record is very politically, and socially, driven. I’ll give you a brief breakdown of each song so you can get a clearer picture.

“Their New Aesthetic” is more or less about technological addiction and how it affects people socially and mentally. It might be an “old man screaming at cloud” topic but, hey, it’s a real thing, brother.

“One in the Mirror” is about mass shooters, which stemmed from the increase of news relating to the increase of mass shootings over the year or so in which the record was written. I wanted a song about gun control/mass shootings, and it’s more or less a song that very much states that there is NO excuse to kill any human when they have no relation to you, especially when it’s driven by racism, religious views, political views or any of that bullshit. Instead, the shooter should look in the mirror and do everyone a favor and kill themselves instead of harming innocent life. Maybe it’s harsh, but so is life.

“The Clenched Fist of Human Greed.” The meaning is right in the title. It just talks about corporate greed and how people are seen as just dollar signs.

“Two on Every Corner” is about police brutality and how the police abuse the law.

“Counting Days” is about depression due to growing older and kind of realizing you’re just waiting to die, all while seeing people you care about leaving your life before your time is up.

“Promised Land” is about the terrors of war and how people live in fear of a conflict they want nothing to do with.

The last song “Shoah” is about the effects of the holocaust on the Jewish people. As an individual of Jewish faith, Kyle wanted to reflect on the fact that even though their community suffered through those dark times, they are still here today.

Moral of this story is that I only watch romance/rom-com’s and that I read mostly Japanese literature, so it was the only way I could answer it without looking like a dumbass

As a promoter on Long Island as part of the East Coast Collective, what do you think were some of your favorite shows that you’ve ever booked?

This question is always hard, except for the number one show I’ll probably ever book in my lifetime was the 2016 Silent Majority reunion shows. I’m grateful for my job because I work in a bunch of different genres so I have the pleasure of booking some favorites in all fields ranging from hardcore bands like Poison Idea, Negative Approach, Breakdown, Crown of Thornz and Killing Time, to metal bands I love like Cannibal Corpse and Obituary, while also booking rappers like Cam’ron and Mobb Deep. I booked a show for Creed from the office—that was cool ’cause I got to hang out with him in the back for an hour or so. I booked Bone Thugs once and a gun was shot 5 feet away from me. Pros and cons.

As a promoter, what are your thoughts on putting your own band on a show of yours? What are your issues with that, if you have any?

I fucking hate it. I’m a very modest person and never want anyone to think I’m putting my band on a show just cause it’s my band, ya know? I straight up sometimes specifically don’t put my band on bigger shows, unless it’s a show that makes sense for us to play sound-wise. It’s not that I think that I should never book my band, which would suck ’cause I book a majority of the bigger shows on LI, but it’s very hard for me to look at a show and not say to myself “wow, am I really putting my band on a show of mine again?” even though it happens once every 3 months at this point. I’m booking a Gorilla Biscuits show this weekend and I didn’t even put us on that, so I definitely have some restraint.